As previously reported, Paramount is preparing Mission: Impossible - Fallout for Blu-ray and 4K Ultra HD Blu-ray later this year, and now according to Tom Cruise the official release date is December 4 (and on Digital on November 20). A 6-movie collection will also be available on the same date (Blu-ray and 4K UHD).

Thank you to everyone who supported Mission: Impossible Fallout in theaters. We have been working on extras and behind the scenes footage and I’m excited to announce that it will be released on digital on November 20 and Blu-ray on December 4. pic.twitter.com/RY0f3Ro7D0

Ethan Hunt and the IMF team join forces with CIA assassin August Walker to prevent a disaster of epic proportions. Arms dealer John Lark and a group of terrorists known as the Apostles plan to use three plutonium cores for a simultaneous nuclear attack on the Vatican, Jerusalem and Mecca, Saudi Arabia. When the weapons go missing, Ethan and his crew find themselves in a desperate race against time to prevent them from falling into the wrong hands.

The 4K Blu-ray will feature a Dolby Vision presentation, a Dolby Atmos soundtrack, and supplements will include:

You can find the latest specs for Mission: Impossible - Fallout linked from our Blu-ray and 4K Release Schedules, where it is indexed under December 4. 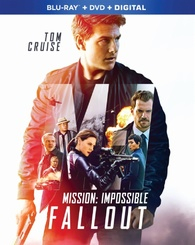 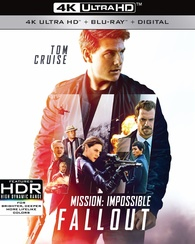