TWIN PEAKS: FROM Z TO A Announced for Blu-ray

David Lynch's twisted and mysterious TV series is returning to Blu-ray along with two episodes presented in 4K.

Paramount and CBS is set to release Twin Peaks: From Z to A on Blu-ray on December 10. Twin Peaks: The Television Collection will also be available on October 15.

The whole universe of the hauntingly mysterious cultural phenomenon Twin Peaks is now packaged together in one definitive, limited edition: TWIN PEAKS: FROM Z TO A. Limited to only 25,000 copies, the collection will hit shelves in the U.S. and Canada on December 10 (with international release dates to be announced at a later date).

A 21-disc collection, TWIN PEAKS: FROM Z TO A will be housed in packaging with an exterior adorned by a wraparound vista of haunting and majestic Douglas Fir trees. Once opened, a depiction of the infamous Red Room is revealed with its brown and crème chevron floor and brilliant red curtains. Sitting in front of the red curtain will be an exclusive die-cut acrylic figure of Laura Palmer kissing Special Agent Dale Cooper. This acrylic figure comes inside a plastic display holder held in place by magnets. Fans will have the option of leaving the figure in place inside The Red Room environment or removing and displaying it elsewhere. The plastic holder can also serve as an easel to display individual images from The Red Room Gallery, a curated set of 5" x 5" printed cards depicting memorable moments in The Red Room. Each package will also contain an individually numbered collectible certificate.

"From Z to A is the definitive box set for avid Twin Peaks fans," said Ken Ross, Executive Vice President and General Manager, CBS Home Entertainment. "With only 25,000 copies worldwide, this is truly a must-have collector's item."

TWIN PEAKS: FROM Z TO A will include over six hours of all-new special features:

You can find the latest specs for Twin Peaks: From Z to A linked from our Blu-ray Release Schedule, where it is indexed under December 10. 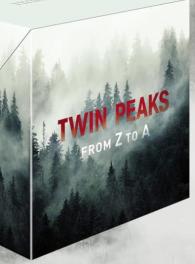 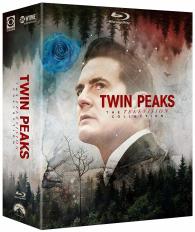