This month, we're covering a dazling, self-reflexive musical, some undead zombies, and a couple of old school gangsters.  Please be aware, that if you haven't already seen them, there are some MAJOR SPOILERS for the discs listed.

If you can only buy three titles that hit Blu-ray in August, here's what we suggest you pick up, starting with the most essential... 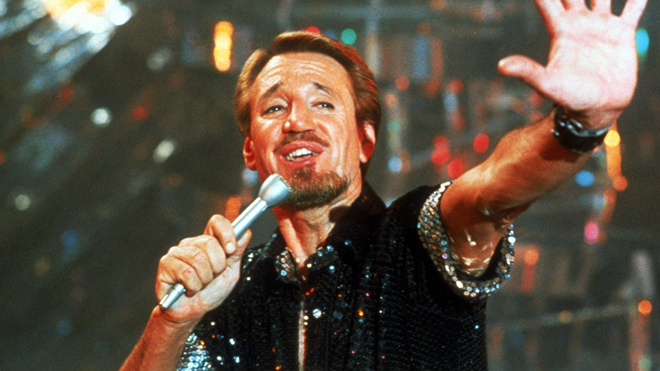 'All That Jazz' - A musical about a narcissistic director dying from a heart attack might not initially sound like a great idea -- but under Bob Fosse's unique direction it becomes nothing short of a masterpiece. Channeling his own experiences and flaws into a dazzling piece of cinematic art, the movie hits all the right steps and notes, creating a song and dance spectacle like no other, turning cardiac arrest into a subversive Broadway celebration.

Though best known as the everyman hero of Steven Spielberg's 'Jaws,' here actor Roy Scheider tackles a very different role as the womanizing perfectionist Joe Gideon, turning in the very best work of his career. Playing a character based on the director himself, Scheider creates a multifaceted portrayal of a very flawed, but still strangely likeable man. He sleeps around and neglects his family for work, but the hard-living artist still deeply cares for the women in his life -- even if he doesn't always show it. Sweaty, pale, and constantly framed with a cigarette in his mouth, Scheider gives the impression of a gradually unravelling man just barely able to hold himself together. As the runtime goes on, Gideon becomes increasingly ill, spiraling into coughing fits while just barely fending off complete heart failure. But despite these seemingly lofty setbacks, he never misses a beat, continuing his drinking and partying even in the hospital. Throughout it all, Scheider plays up the man's irresistible charm while perfectly balancing his towering ego and deep-rooted self-loathing.

And for his part, from behind the camera, Fosse proves to be every bit of the genius that his on-screen stand-in appears to be. Using innovative editing techniques the director is able to choreograph his images just like he choreographs his dancers, creating striking montages and juxtapositions. The film is littered with memorable sequences that use cinematic form to enhance the storytelling -- including a scene that cuts back and forth between Gideon's ex-wife assuring his co-workers that he's doing fine with shots of the man dying in the hospital. But nothing can beat the film's climactic fantasy musical number that sees Gideon take to the stage for a stirring rendition of "Bye Bye Love," appropriately changed here to "Bye Bye Life." Standing before an audience filled with his friends and family, the man bids farewell to his life with all the showbiz glitz and glamour we've come to expect, turning death into an elaborate Hollywood musical. But Fosse isn't just content to end on such a sparkling high note. Instead, he starkly cuts from the colorful performance to a matter-of-fact image of a lifeless Gideon being zipped up in a body bag -- finally completely stripped of the showbiz facade he once hid behind. While the director's fictional movie within the movie might only be worthy of "half a balloon," 'All That Jazz' is a true five-star achievement, and this release from Criterion is not only among the month's best discs, but the entire year's as well. 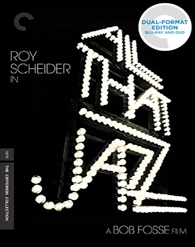 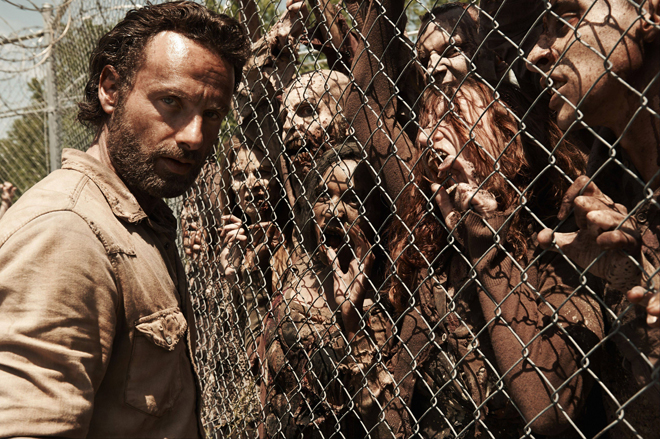 'The Walking Dead: The Complete Fourth Season' - Emaciated, desperate creatures struggling to limp along to some unknown destination, dressed in tattered clothing with blood dripping down their lips, fueled only by a primal necessity to survive. At first glance, this harrowing description readily describes the horde of zombies that litter AMC's hit horror series -- but as the show continues to evolve and its characters continue to reach new levels of misfortune and determination, those words could also accurately define its protagonists. An absorbing and absolutely gut-wrenching examination of survival in a post-apocalyptic world besieged by undead monsters, the series repeatedly reveals that it may actually be the living we should fear the most.

Despite being a gigantic ratings success, the show has had several creative bumps throughout the years, and has gone through several different showrunners (never a good sign). Most notable of all these hiccups, have been some persistent pacing issues that have gone on to rob otherwise good material of resonance due to frustratingly slow build-ups marked by filler episodes and storylines that have aimlessly walked in circles. Thankfully, for the most part, season four works hard to correct these past mistakes, offering the most engaging and satisfying stretch of episodes yet. Extending The Governor's arc beyond season three was a poor choice, but to their credit, the writers' conclusion to his story works rather well and leads to a powerful and action-packed climax that finally takes us away from the prison. And it's in this latter half where the producers decide to mix things up. In a potentially risky move, the main cast is separated, leading to a few interesting and sometimes unexpected pairings. This lets new relationships develop and paints old characters in a different light. Likewise, the scripts continue to examine the thought provoking and disturbing realties that come with trying to live in a dying world -- exposing the many lofty sacrifices one must make of the body, mind, and even soul.

This concept comes to a head in one of the season's most striking and divisive moments. With his son in danger and no other options at his disposal, Rick (Andrew Lincoln) lets go of his humanity and literally takes a bite out of his attackers. For a moment he chooses not to be a man anymore. He's simply a father. An animal protecting his cub. A mindless creature acting only on primal instinct. A zombie biting for survival. In many ways it's a moment we've been building toward since the series began without ever realizing it, and the writers pull it off with a powerful level of ambiguity. Firing on all cylinders, season four of 'The Walking Dead' manages to provide a thrilling horror story packed with gruesome scares, exciting carnage, and insightful human drama, tackling complex themes and disturbing situations with a surprising level of depth and nuance. This is easily one of the most popular and depressing shows on TV (it would make a devastating double bill with 'The Leftovers'), but it's also now finally becoming one of the best, making this Blu-ray set a clear must own. 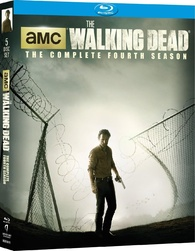 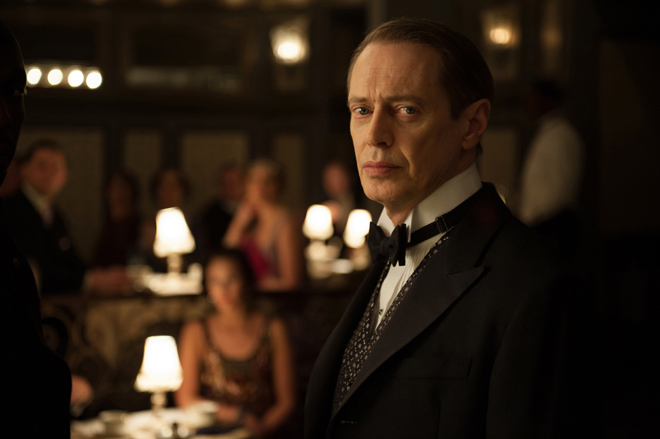 'Boardwalk Empire: The Complete Fourth Season' - There's just something irrefutably classy about a gangster in a fedora. Sure, they may be greedy, murdering thugs who kill and steal for their own personal gain -- but I'll be damned if they don't look rather dapper while doing it! Of course, with HBO's 'Boardwalk Empire,' this level of stylistic prestige extends far beyond just the characters' handsome hats. One of the small screen's most visually cinematic offerings, the series is layered in authentic production designs and costumes, fully bringing its prohibition era setting to life. And let's not forget about the actual performers who end up inhabiting all of those fetching coats. Led by the great Steve Buscemi, the ensemble here is simply second to none, helping to enthrall audiences into the show's slowly absorbing drama. And as deliberate as the series' pace can be, viewers can always rely on one steady fact -- it's all going to end with a bang.

With season four, the writers take many of the characters down several enticing arcs while playing up existing rivalries and creating new ones. Highlights include the introduction of a fresh antagonist in the form of Jeffrey Wright's intimidating Dr. Valentin Narcisse. The actor turns in a brilliant performance that carries a uniquely subdued temperament of dread. Likewise, this storyline places a heavy emphasis on Chalky White, giving Michael Kenneth Williams some of the meatiest material he's had to work with yet. Switching gears (and cities), Nelson Van Alden's evolving transformation from prohibition agent into a full-fledged gangster continues to be one of the show's most interesting aspects. Michael Shannon layers the role with conflicted emotions and carries a level of unbridled, pent up rage that is always dangerously close to boiling toward the surface. But of all the season's various intersecting plotlines, it is perhaps Richard Harrow's (Jack Huston) struggle to find peace that proves to be the most resonant. The half-faced assassin undergoes a moral crisis, wishing to leave his life of murder behind. Sadly, this transition doesn't come easy, and the character is forced to return for one last job resulting in one of the show's most tragic ends.

Oddly enough, however, it's Nucky himself who is one of the least interesting aspects of the season, though Buscemi continues to do great work in the role. Still,  season five will be the show's last, and season four sets things up nicely for a potentially riveting swan song. This Blu-ray set delivers the top-tier technical and special feature package that customers have come to expect from HBO, easily making this one of the month's most impressive releases. The final batch of episodes premieres on September 7, and while I'm not sure what violent and shocking twists the writers have in store for Nucky's final curtain call, I'm pretty sure he'll be properly dressed for the occasion. 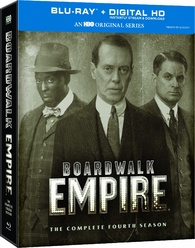 So, there you have it. While there are many titles worth picking up this August, those are our top three must own recommendations. We'll be back next month with three more essential picks, but for now, what do you think of our selection? What are your choices for August's must own titles?