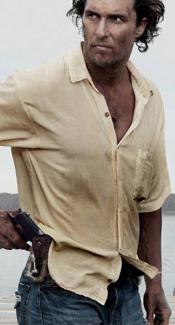 Last month we spotlighted an inspirational biopic on one of baseball's greats, a hypnotic noir thriller, and the gruesome return of a cult horror franchise. If you haven't already, be sure to check out the Essential Picks for November, December, January, February, March, April, May, June, and July.

This month, we're covering an expertly crafted Southern drama with a heart, a multifaceted examination of rippling consequences, and a visually stunning science fiction adventure. Please be aware, that if you haven't already seen them, there might be some spoilers for the films listed.

If you only buy three titles that hit Blu-ray in August, here's what we suggest you pick up, starting with the most essential...


'Mud' - Mixing shades of Mark Twain, Cormac McCarthy, and the Coen Brothers, channeled through a unique, singular voice all its own, Jeff Nichols' 'Mud' is a nearly perfect cinematic yarn about youth, love, and the hardships of growing up. With two great turns from its co-starring child actors, and a stellar performance from Matthew McConaughey, the film leaves a lasting impression that tackles deep themes without sacrificing an unabashedly romantic heart.

Deftly constructed and concisely scripted, Nichols' approach is seemingly effortless, bringing a perfectly assured style to the screen steeped in Southern Gothic mystery and palpable yearning. Through the tale of two boys (Tye Sheridan & Jacob Lofland) who befriend an enigmatic fugitive named Mud (McConaughey), the filmmakers weave a perceptive and tense story that probes deep into the dangerous yet ultimately life-affirming waters of love. As the title character, McConaughey is both charismatic and filled with dangerous mystery, playing up the ambiguity of his intentions. Full of tall tales about his sensational past, we're often left wondering how much of what he says is really true. Is he actually embarking on a noble quest to reunite with a lost love, or is he merely an opportunistic liar? These questions come to a head during the film's climax, and the emotional payoff is heart wrenching, revealing once and for all if this sweet-talking criminal is a selfish conman or a selfless friend.

The relationship that forms between the dubious man and his adolescent confidant, Ellis (Sheridan), is the soul of the film, and the young actor really does a phenomenal job, creating a character that is as brave and staunch as any great storybook hero, and as raw and vulnerable as any real-life kid. Through Mud and his accounts of fairy tale love, the teenaged dreamer catches a tangible glimpse of the kind of impossibly pure romance he dreams of himself, and determined to prove that such affections can truly exist, he helps him. But juxtaposed against a world much murkier than either Mud or Ellis would like to accept, these idealistic concepts come under fire, threatening to tear down the boy's innocence.

Infused with a gently mythic quality, the film is both naturalistic and lyrical, evoking the intricate texture and nuance of literature through a rich narrative that is timeless and universal. While the closing scenes come close to skirting into saccharine sentiment, the movie never loses a certain edge, balancing a refreshingly optimistic spirit with darker elements. And at the same time, as sobering as some of these more cynical observations are, this is ultimately a story about hopeless romantics forever fated to be hopelessly romantic and, like any incorrigible, idealistic dreamer will tell you, even in the face of awful tragedy, there's no keeping a starry-eyed Quixote down -- not when there's still damsels to save, and windmills to chase.


'The Place Beyond the Pines' - In a black and white world, there is right and there is wrong. There are good guys and bad guys. There are cops and robbers. Derek Cianfrance's 'The Place Beyond the Pines' does not take place in a black and white world. Instead, the director's ambitious drama is layered in gray, in shades of murk and desperation and guilt. Where motivations are tragically complicated. Where the right things are done for the wrong reasons, and the wrong things are done for the right, and their consequences echo on and on and on.

Structured in three distinct yet still irrevocably connected segments, the film chronicles the reverberating winds of cause and effect, tracing the cyclical nature of fate. By examining the life of a stunt rider turned petty thief (Ryan Gosling) and the cop who brings him down (Bradley Cooper), Cianfrance shines a light on different sides of the same coin, revealing that morality might be a lot more ambiguous than we'd like to admit. Noble intentions are mixed with dangerous ambitions, costly blunders result in lost lives, and two families become forever entwined in the mistakes of the past. Emotions of shame, rage, insecurity, and sorrow play on a repeating loop, carrying the sins of the fathers onto their children. Throughout it all, Cianfrance employs a quietly stylized aesthetic, offering a potently honed in command of tone, pace, and imagery. Impressive, unbroken handheld shots maintain tension while extending the texture and believability of the world. Car chases are exciting without being sensationalized, and little hints of somber poetry enhance the narrative's deeper themes.

This is a film where men are heralded as heroes and villains, but there are no real protagonists or antagonists. These are flawed souls and messy lives caught in each other's wakes, weaving three different stories that are really all one in the same. While the third act does start to meander a bit, losing some of Cianfrance's previously unwavering sense of narrative confidence, the film still succeeds, offering a rare level of depth and nuance. The Blu-ray itself comes with absorbing video and audio presentations and a solid set of supplements, helping to solidify the disc's place on this list. Moody, affecting, and cinematically dense, this is a powerful drama, and easily one of August's top titles.


'Oblivion' - A good movie trailer wets our appetite for a film without spoiling too many major plot twists, but every now and then a trailer comes along that just goes a little too far. Poor 'Oblivion' had such a trailer, and while I can understand why certain beats were revealed (who wouldn't want to show off Morgan Freeman in their preview?!) it's clear that the movie was structured to keep those elements under wraps. Thankfully, it turns out the plot actually has little to do with one's enjoyment of the film, and while many of its predictable (and very familiar) revelations are unlikely to astonish, the ride itself is a lot of fun.

Taking heavy inspiration from previous sci-fi movies like 'Moon' '2001: A Space Odyssey,' 'Total Recall,' 'Star Wars,' and even 'Wall•E' the movie offers a post-apocalyptic mindbender that aims to keep us guessing. Sadly, due to the aforementioned trailer and very clear influences, this "mindbending" element is largely nullified but, thankfully, what's left is still quite entertaining. Cruise is an effective lead as our typical determined hero, elaborating on many tried-and-true sci-fi themes dealing with the indomitable will of man, the nature of memory, and the power of love. Though conventional, his journey to uncover the truth about the world's tragic fate, and the mysterious woman (Olga Kurylenko) who haunts his dreams, is engaging and well executed. Of course, the real draw here isn't the tried-and-true plot or Cruise's charming fortitude -- it's director Joseph Kosinski's impressive eye for tantalizing visuals.

To be honest, I really didn't want to like the film's style at first. The overly slick production design, "cool" compositions, grandiose use of music, and thin plot, all initially reeked of superficial, empty filmmaking… but, as the runtime went on, I was fully won over by Kosinski's sense of visual wonder and excitement. There is real craft here, creating a believable and interesting world, and the director expertly designs his set pieces with an air of danger and genuine fun. The chase scene with the bubble ship and drones is now one of my favorite action scenes of the year, and the director does a great job of mixing visceral thrills with unbridled exhilaration and visual personality. The film as whole is simply full of breathtaking imagery, capturing the desolation, loneliness, and quiet beauty of a ruined Earth.

Almost derivative to a fault, 'Oblivion' ultimately takes all of its clear influences and lovingly forms them into something that, while not exactly unique, is still thoroughly entertaining and well made. Like several critics pointed out during its theatrical release, the movie almost plays out like a remix of better sci-fi efforts, but that doesn't mean it's without merit of its own. Kosinski may still have a few kinks he needs to work out when it comes to scripting, but as a visual storyteller he certainly knows how to stage some exhilarating action and create engrossing worlds. And despite any qualms with the plot, the Blu-ray features truly stunning video and audio. A five star technical presentation through and through, this release will likely become many home theater owners' go-to title to show off their fancy new equipment. By far the most impressive demo disc of the month, there's also a pretty enjoyable flick here too, earning the move the last spot on August's must own list.

So, there you have it. While there are many titles worth picking up this August, those are our top three must own recommendations. We'll be back next month with three more essential picks, but for now, what do you think of our selection? What are your choices for August's must own titles?