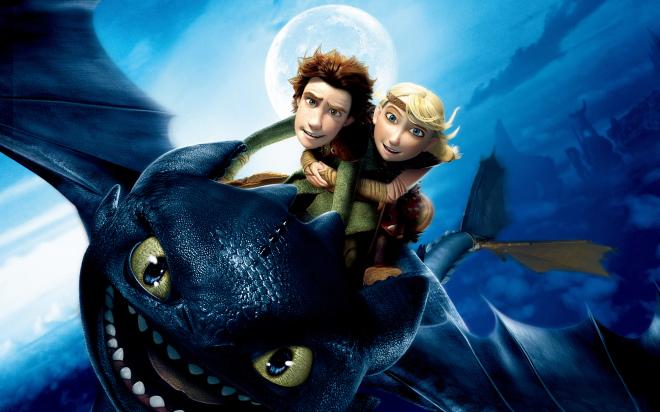 Both animated films will be hitting the 4K format in January.   UPDATE: Features and specs finalized.

How to Train Your Dragon - A young Viking named Hiccup lives on the windswept island of Berk, where his father Stoic the Vast is the tribe's feared chief, and fighting dragons is part of every young warrior's training. But Hiccup's destiny of becoming a prized dragon fighter takes an unexpected diversion when he saves and befriends an injured dragon, Toothless. Hiccup now embarks on a mission of his own to convince his tribe to abandon its barbaric tradition of ruthless dragon-slaying and try out some new methods.

The release will feature an HDR presentation of the film with a DTS:X soundtrack and supplements include:

The Ultimate Book of Dragons

How to Draw a Dragon

The Story Behind the Story

The Technical Artistry of Dragon

How to Train Your Dragon 2 - It's been five years since Hiccup and Toothless successfully united dragons and vikings on the island of Berk. While Astrid, Snotlout and the rest of the gang are challenging each other to dragon races (the island's new favorite contact sport), the now inseparable pair journey through the skies, charting unmapped territories and exploring new worlds. When one of their adventures leads to the discovery of a secret ice cave that is home to hundreds of new wild dragons and the mysterious Dragon Rider, the two friends find themselves at the center of a battle to protect the peace. Now, Hiccup and Toothless must unite to stand up for what they believe while recognizing that only together do they have the power to change the future of both men and dragons.

The release will feature an HDR presentation of the film with a DTS:X soundtrack and supplements include:

Dawn of the Dragon Racers Short

Where No One Goes, the Making of How to Train Your Dragon 2