How to Train Your Dragon - 4K Ultra HD Blu-ray

When a young Viking named Hiccup breaks with tradition and befriends a dragon, it changes the lives of everyone in his village forever. How to Train Your Dragon remains one of my favorite animated movies of all time for its unique ability to thrill, entertain, and make you feel like you can fly. On 4K Ultra HD Blu-ray with HDR10 and DTS:X, the film has never looked or sounded better. Highly Recommended. 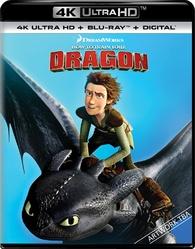 For a more in-depth take on How to Train Your Dragon, check out our original Blu-ray review, written by Aaron Peck back in 2010.

For me, How to Train Your Dragon has always been a special animated adventure film. It tells the story of a young man who feels like an outsider in his own home because he doesn't have the brawn to fit in with the village's warrior class. Making the matter even more difficult, Hiccup is the son of the village's mightiest warrior, and he won't give Hiccup a chance. Then one day Hiccup shoots down the rarest and fiercest dragon of all, onto to discover a creature with heart and soul before building a friendship and ultimately figuring out a way to save the village from its weekly dragon attacks.

How To Train Your Dragon is a marvel of a movie for the way in blends humanity, laughter, and thrills. It asks us to consider kindness in all creatures and gives us the sensation of riding on the back of a dragon, soaring through the skies. In essence, it takes a story an outsider striving to fit in and makes us all feel like children having an adventure. This film was a blast in cinemas, a demo disc on Blu-ray and 3D Blu-ray, and it's great to revisit it again in 4K.

How to Train Your Dragon returns to home video as a 2-disc 4K Ultra HD + Blu-ray + Digital combo pack. Redeeming the included code via UniversalRedeem.com takes you to Movies Anywhere where it redeems in 4K and syncs with your iTunes, Amazon, Vudu, Google Play, Microsoft, and FandangoNow accounts. Unfortunately, while Dragon streams in 4K HDR10, there is no Dolby Atmos or DTS:X for streaming. The included Blu-ray appears to be a copy of the Collector's Edition released just before How to Train Your Dragon 2 debuted theatrically.

How to Train Your Dragon soars on 4K Ultra HD Blu-ray with a crisp, colorful 2160p HEVC encode featuring HDR10 that absolutely bests its 2D Blu-ray counterpart in almost every way.

Wow, I'm really surprised by this disc. My experience with 4K CGI animated movies has taught me to keep my expectations in check when it comes to the 4K and HD differences. Sometimes they are subtle (resolution) and sometimes they are more apparent (color gamut), but it's rarely a massive difference.

How to Train Your Dragon 4K is, shockingly, an obvious upgrade over the previous Blu-rays. There's more detail in the characters' faces and costumes. There's more background definition. You can see more of the individual flames every time a dragon spits fire. The contrast is improved. Black levels are sublime. And, of course, the colors are more dynamic. As I said, I was surprised to see this much of an upgrade; it actually reminds me more of what you see when you jump between 4K and HD streaming.

Dragon is an atmosphere-heavy movie and, in rewatching the standard Blu-ray, the mist makes many of the environments feel flat, and makes a lot of the characters and creatures feel a touch weightless. By comparison, the 4K Ultra HD Blu-ray makes the whole universe and everything in it appear more grounded and real.

Like many HDR10 grades (and some Dolby Vision ones too), you do lose a touch of shadow detailing with the extra contrast, but it's not terribly severe and doesn't introduce full-crush. And, despite all the improvements, there are a few softer wide shots, so none of these compliments should imply this disc is perfect or able to compete with the best native 4K transfers in terms of resolution.

Still, I don't know what the magicians at DreamWorks and Universal Home Entertainment did to this transfer, but it's probably the best How to Train Your Dragon has ever looked (the 3D version is pretty great too, but I didn't have time to revisit for this review).

How to Train Your Dragon roars onto 4K Ultra HD Blu-ray with an immersive DTS:X sound mix that improves upon its reference-quality Blu-ray ancestors, but doesn't quite match the best Atmos and X tracks available today.

From its 5.1 and 7.1 TrueHD origins, Dragon has always been filled with clear vocalizations, roaring dragons, fire-bomb explosions, clashing weaponry, and a good deal of world-building. It's everything we love about surround sound.

This DTS:X mix takes everything that worked before and builds out the hemispherical immersion with various music and sound effect elements. When dragons bellow in a cave, it's all around you. When Hiccup and Toothless fly over the ocean, the wind whips in every direction. And when John Powell's epic score builds to a crescendo, you feel it in your bones.

If I were nitpicking for a moment, I suppose I wish there was just a touch more overhead articulation and a little more LFE bombast -- akin to Bladerunner: 2049 or Mad Max: Fury Road or How to Train Your Dragon 2 -- but outside of those quibbles, this is an awesome mix all around.

How to Train Your Dragon offers one special feature on the 4K disc -- the audio commentary -- while the rest of the bonus materials can be found on the standard Blu-ray, which you can read about HERE.

How to Train Your Dragon is a thrilling adventure tale with a lot of heart and laughter and, outside of the 3D Blu-ray, I can't think of a better way to experience this movie again (or for the first time) than 4K Ultra HD Blu-ray. The 4K HDR10 presentation is sharper, clearer, and more colorful than the HD Blu-ray, while the DTS:X soundtrack makes an already demo-worthy mix just a touch more immersive. There aren't any new bonus materials. Highly Recommended to fans and 4K enthusiasts.