When you can’t keep a franchise killer dead it's best to say he never died at all! Halloween 4: The Return of Michael Myers course corrects the franchise back to familiar territory within the slasher genre it helped spawn. Aside from a terribly goofy mask, this was a solid creepy entry in the franchise introducing the world to fan-favorite Danielle Harris as stalwart Donald Pleasence gets to chew some extra scenery. After a pretty spotty history on home video, Halloween 4 unleashes some carnage on 4K Ultra HD Blu-ray thanks to Scream Factory. The new 2021 scan and Dolby Vision transfer is easily the best this film has looked on disc to date. Add in multiple audio options and some great bonus features and you have an excellent set worth upgrading for. Highly Recommended.

We previously reviewed Halloween 4: The Return of Michael Myers on Blu-ray back in 2012. Read my colleague M. Enois Duarte’s Review.

10 years ago, Michael Myers rampaged through Haddonfield killing sixteen people trying to slaughter his sister. After nearly burning to death alongside his doctor Sam Loomis (Donald Pleasence), Michael has been in a coma. The night he’s to be transferred to a minimum-security facility, Michael overhears of the existence of his niece Jamie Lloyd (Danielle Harris) and his brutal rage builds once again. Returning to Haddonfield, Michael will stop at nothing to murder his only surviving relative and anyone that stands in his way. 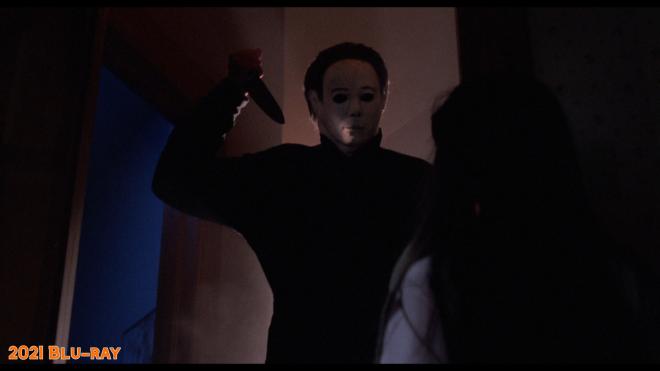 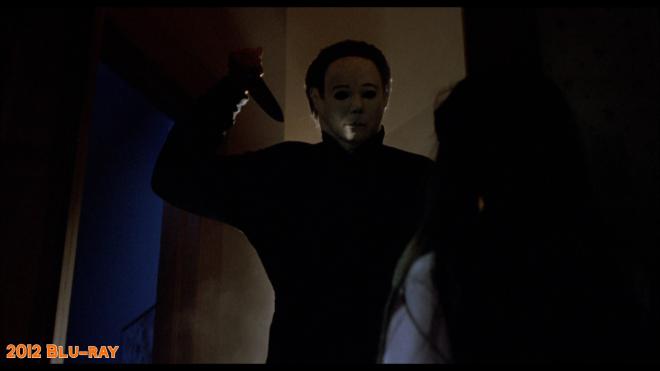 Call me sentimental, or maybe even too forgiving, but I’ve always had a soft spot for Halloween 4: The Return of Michael Myers. I saw this movie when I was entirely too young and it really scared the crap out of me. I’d never seen a horror movie where the monster or killer was actively trying to off a little kid before! Most slasher flicks are content with cutting down inebriated fornicating teenagers, not small children. For a film that was written at great haste and into production to get ahead of a Writer’s Strike, I think this one turned out pretty well.

Director Dwight H. Little sets the tone early avoiding the traditional “Halloween Theme” credits sequence in exchange for haunting seasonal imagery with a low ominous score from Alan Howarth. Of course, it doesn’t take long for our titular “evil on two legs” to get back to slaughtering innocent folks wholesale, but the opening gives audiences a minute to catch up with everything that’s happened. It quickly sets up the scenario and then lets Michael get to back work. 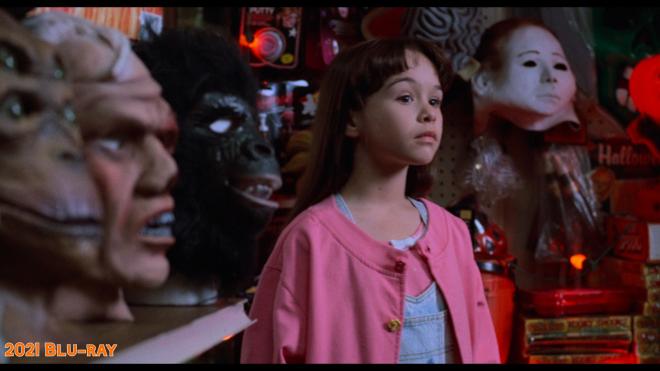 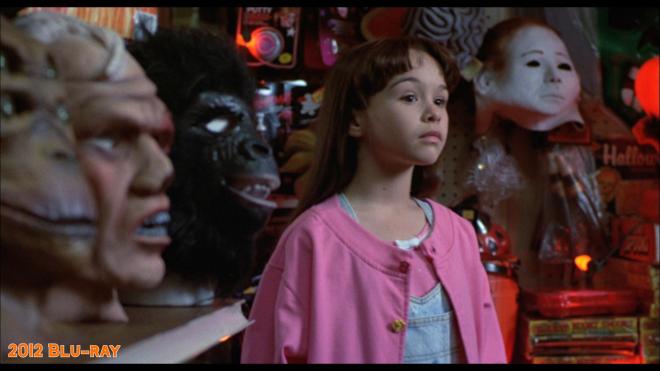 Far from a flawless movie, I still feel this is one of the better sequels of the franchise - at least the sequels that hold the Brother/Sister canon. Halloween 4 isn’t as clever and sharp as Halloween II, it has the worst mask of the series, but this film is certainly better than Halloween 5. I love the mood and atmosphere of Halloween: The Curse of Michael Myers, but that last act - in both versions - really sucks the wind out of the film into some terribly goofy territory. It’s nowhere near as good as the original film, but its knife is in the right place casting Michael as the unstoppable boogie man of our nightmares.

Scream Factory delivers the hauntingly creepy Halloween 4: The Return of Michael Myers Collector’s Edition to 4K Ultra HD Blu-ray in a two-disc 4K UHD + Blu-ray set. The discs are housed in an eco-friendly black case with reversible insert art that reflects the classic original poster artwork we all know and love. The whole package is housed inside a sturdy hard cardboard stock slipcase. The discs loads to animated main menus with traditional navigation options.

Technical Note - like what I experienced with the Halloween Collector’s Edition, my Oppo 203 didn’t play the 4K disc right away. I had to go through the same, insert the disc, shut off the player, and turn it back on routine then it started up just fine without issues. Neither my Samsung player nor my PC drive had this problem. 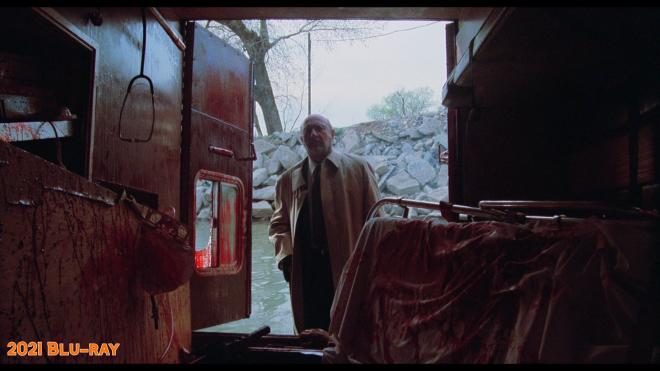 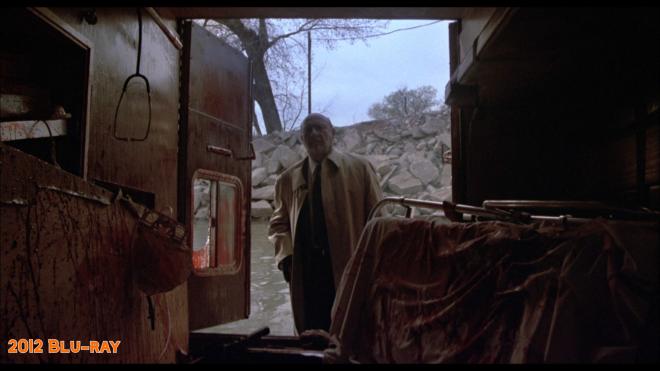 No one will ever accuse Halloween 4: The Return of Michael Myers of being the best shot film of the series, it’s certainly suffered from some lackluster transfers over the years. That’s why I’m pleased to say that this 2160p Dolby Vision Transfer (with HDR10) sourced from a new 2021 4K scan is easily hands down the best this film has ever looked on home video. From the color saturation to fine details to the healthy grain structure, I’m just not used to seeing it look this good. It may not be 100% perfect, but again, better than anything we’ve had before.

Right out of the gate with the creepy opening credits there’s a substantial boost in image depth. The old 2012 disc always felt really flat and lifeless to me with some unhealthy drab muted colors that never came to life. Once we move to the hospital and meet up with Michael Pataki’s Dr. Hoffman and the ambulance team, you can see a full range of details with a healthy organic film grain structure that is never too intrusive without any signs of DNR smoothing. The makeup work on Michael’s scarred hands, the scar tissue effects on Loomis’ face - all of it is on display. 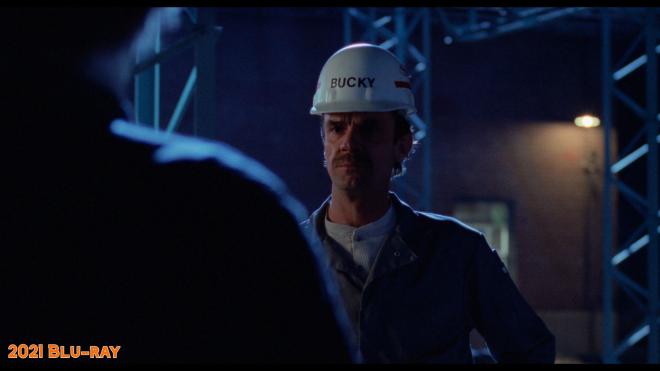 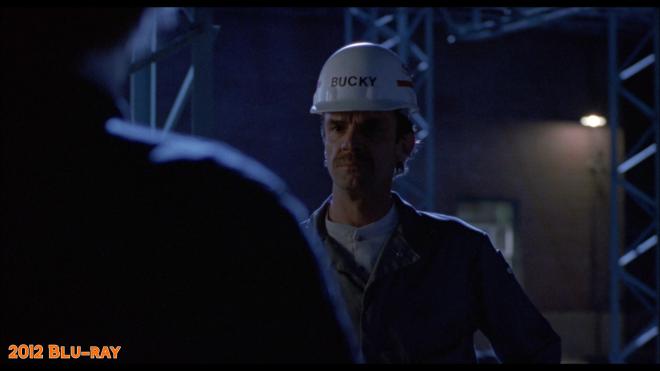 Dolby Vision HDR and HDR10 are doing what they’re supposed to do by taking this new transfer’s best assets and make them look even better. Colors are robust and natural - reds, in particular, have a stronger saturation. Blues have a stronger push to them than before maintaining that piece of visual continuity with the first two films. Yellows don't get many moments to pop, but the film's more seasonal golden tone is retained nicely. Skin tones are healthy - they can skew a tad pinkish in places, like when the guys are trying to hit on Kelly Meeker but nothing too out of the ordinary there. THey've always looked a little wonky like they caked on too much makeup.

Black levels and contrast are well balanced. The big issue I’ve had with past releases has been just how flat and dull they looked. Scenes that were supposed to take place in a fully lit room - like when Loomis and Meeker first search for Jamie in her home. That scene looks like the power got knocked out but that hadn't happened yet in the film. Now the proper lighting is back in play. Even in bright daylight scenes, that 2012 disc just looked too dull for me. Now black levels and shadows are that appropriate deep void we expect Michael to be lurking in. Likewise, whites are bright and bold but without some of the blooming issues of past releases. Film elements are in overall very good shape, there’s still some slight speckling here and there, but nothing serious or distracting. All in all, very happy with the results here! 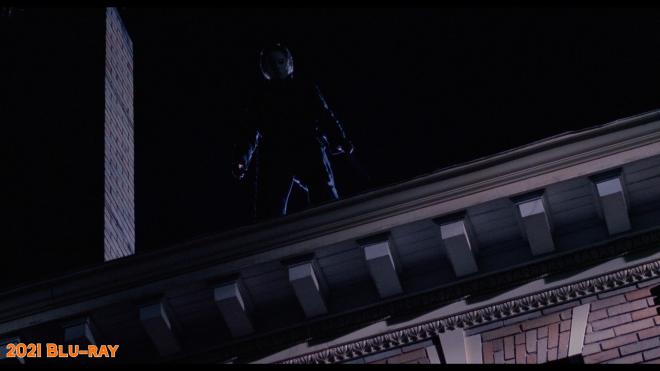 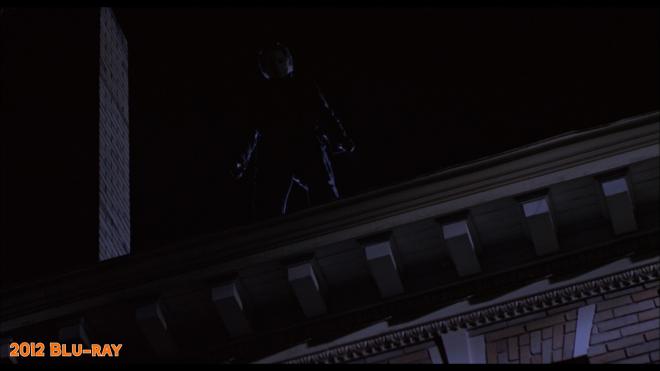 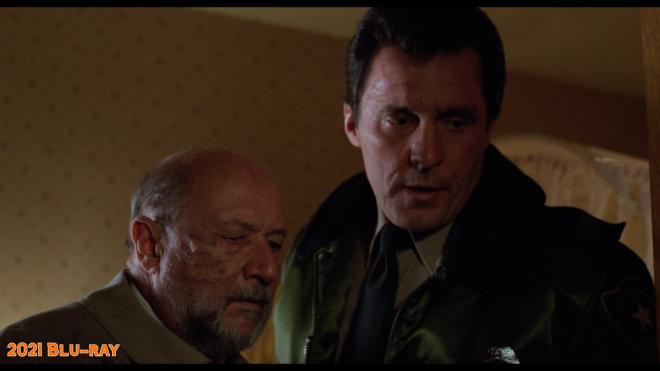 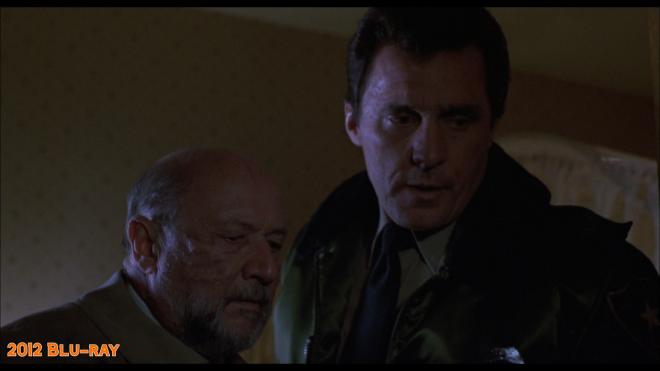 Not to slouch around the couch in the audio department, Scream Factory assembled four different audio options for you to choose from. You get a DTS-HD MA 2.0 mix, a DTS-HD MA 5.1, original DVD Dolby Digital 5.1, and a new Atmos audio track. I’m going to skip to the skinny and give you my favorite tracks of this package.

First, this new Dolby Atmos track is excellent for this particular film. There’s not a ton of activity in the sides and rears, they’re mainly there for accent effects or mood pieces, but they come alive when it counts during big scares and kill scenes. The piece I loved about this mix - and it’s something that carries throughout the film - is how present the Alan Howarth score is throughout the front/center/height channels really soaking in that creepy mood. Dialog is much stronger than past releases and sound effects get some extra pinpoint placement that really gives the film some extra life. Michael slashing at Rachael’s hands along the roofline gets extra height placement, the opening storm comes from above and moves around the channels nicely - all in all a great mix. 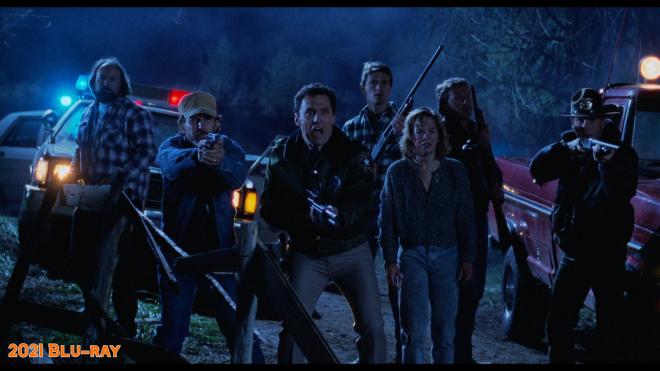 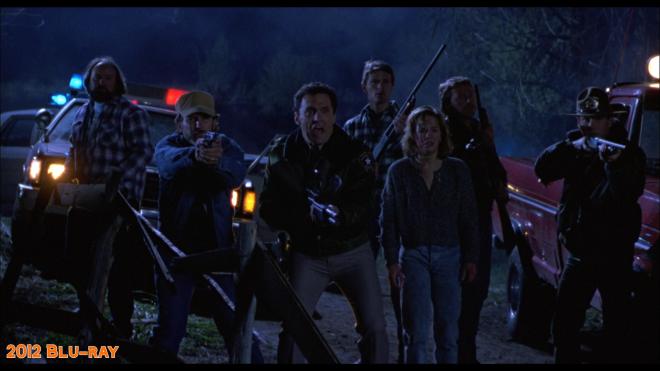 Next, I really dug the DTS-HD MA 2.0 mix. Like the Atmos track, it’s much stronger and more present with dialog, scoring, and sound effects. It’s certainly not as open as the Atmos, there’s obviously less sub activity in the low end, but it’s a very good track. If this was all that we’d gotten previously.

After that comes the DTS-HD MA 5/1 mix that’s been recycled from the 2012 release along with the DVD Dolby Digital 5.1 mix. Truthfully, I’ve never liked these tracks. They were just okay at best. But now comparing them to the new 2.0 track and the Atmos mix, it’s clear as day how much thinner and less impactful these two tracks are. I mean they work, they get the job done ultimately, but I had to crank the volume up just to reach the same audio impact. 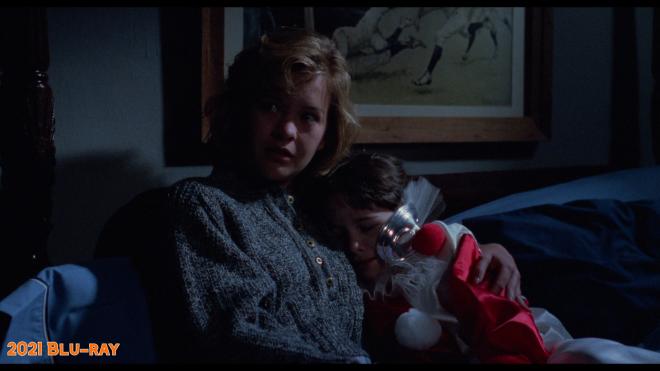 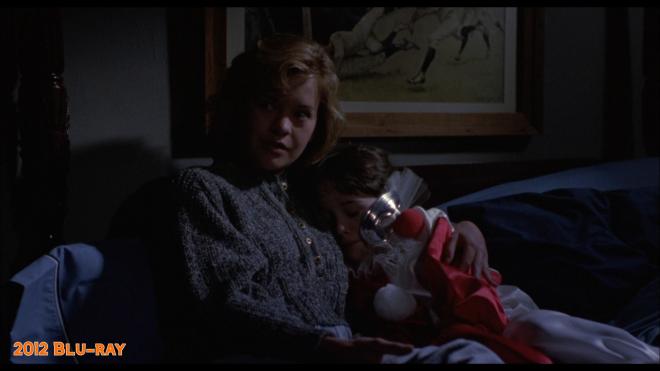 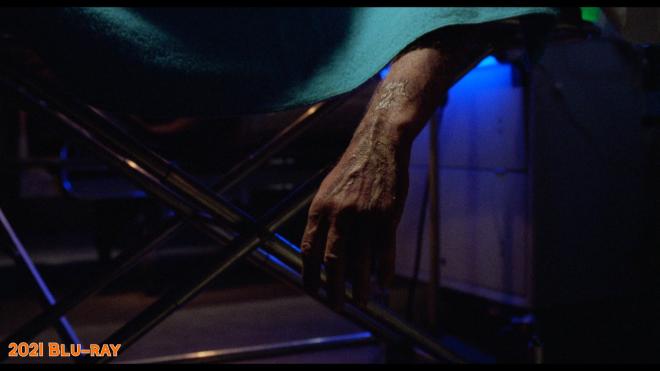 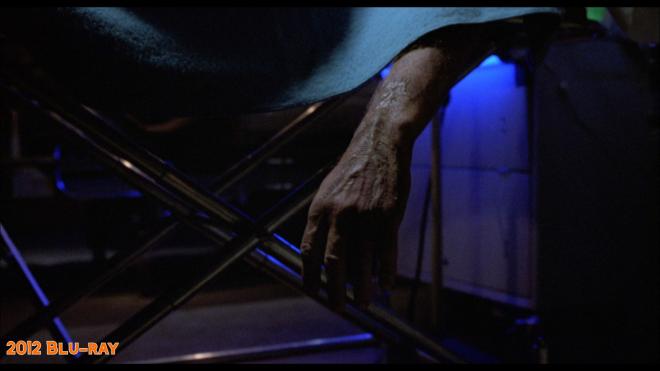 Again keeping with the theme of these latest Halloween releases, Halloween 4: The Curse of Michael Myers gets all of the past release bonus features. Digging back through the Deluxe Collection set very quickly, I don’t think anything major is missing. The only small thing I didn’t see this time out were those short silly intros Danielle Harris and Ellie Cornell aren’t here, but they’re not really much of a loss to be honest. Their commentary is the bigger get and that’s been brought over. 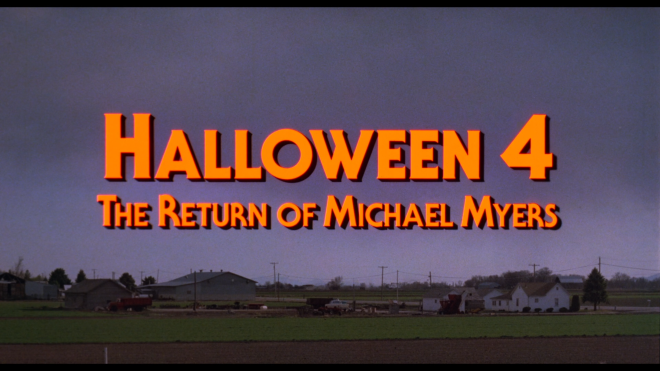 Even I’ll admit that Halloween 4: The Return of Michael Myers wasn’t the best film of the franchise, but it’s always been a favorite for me. 1, 2, and 4 were the perfect triple feature when I was a teen. Of course today I try to watch all of the films leading into the big Holiday day, but 4 is the one I like to pull out any time of the year when I just need something on in the background. It’s got mood, atmosphere, and was a solid attempt to reinvigorate the ailing franchise. Michael may look goofy as hell, but it’s still a good creepy flick with ample gore and some pretty inventive kills!

Scream Factory does right by fans who have been eager and waiting for Halloween 4: The Return of Michael Myers to get an upgrade. The new 4K Dolby Vision transfer is often stunning easily leaving behind any past release. Fans get four audio options to chose from but that Atmos mix is pretty solid stuff and you get all of the best legacy bonus features to match. Fans itching for that upgrade have a good reason to upgrade this sequel one more time. Highly Recommended.