Sequels are nothing new, but Halloween II took the bold step of picking up the action mere seconds after where John Carpenter’s classic original left off. Not as fresh and new as the original, but the hospital setting is eery and serves up more than a few classic franchise moments.
Scream Factory gives the second and best sequel of the franchise a fitting 4K Ultra HD Blu-ray upgrade with a three-disc Halloween II Collector’s Edition. Sporting a fresh new Dolby Vision transfer with an active Atmos mix and a healthy batch of bonus features to pick through. Highly Recommended

We’ve covered Halloween II a few times already so you can catch up with our previous thoughts here and here.

As a matter of fact, it was the boogie man. Mere moments after being stabbed and shot six times and falling out of a window, Michael Myers has disappeared. In a fury, Dr. Loomis (Donald Pleasence) takes back to the street trying to find his former patient. Meanwhile, the wounded Laurie Strode (Jamie Lee Curtis) is admitted to the hospital for treatment. As Michael stalks his way towards his target, Dr. Loomis learns of a deadly connection between the madman and the innocent teenager that was almost killed.

A lot changed in the world of horror movies after John Carpenter’s original Halloween overtook theater screens to massive box office success. Slasher films were all the rage and quickly the only way to one-up the competition was to get more intense and even bloodier. When the time came for a sequel, audiences expected blood - and Carpenter delivered. 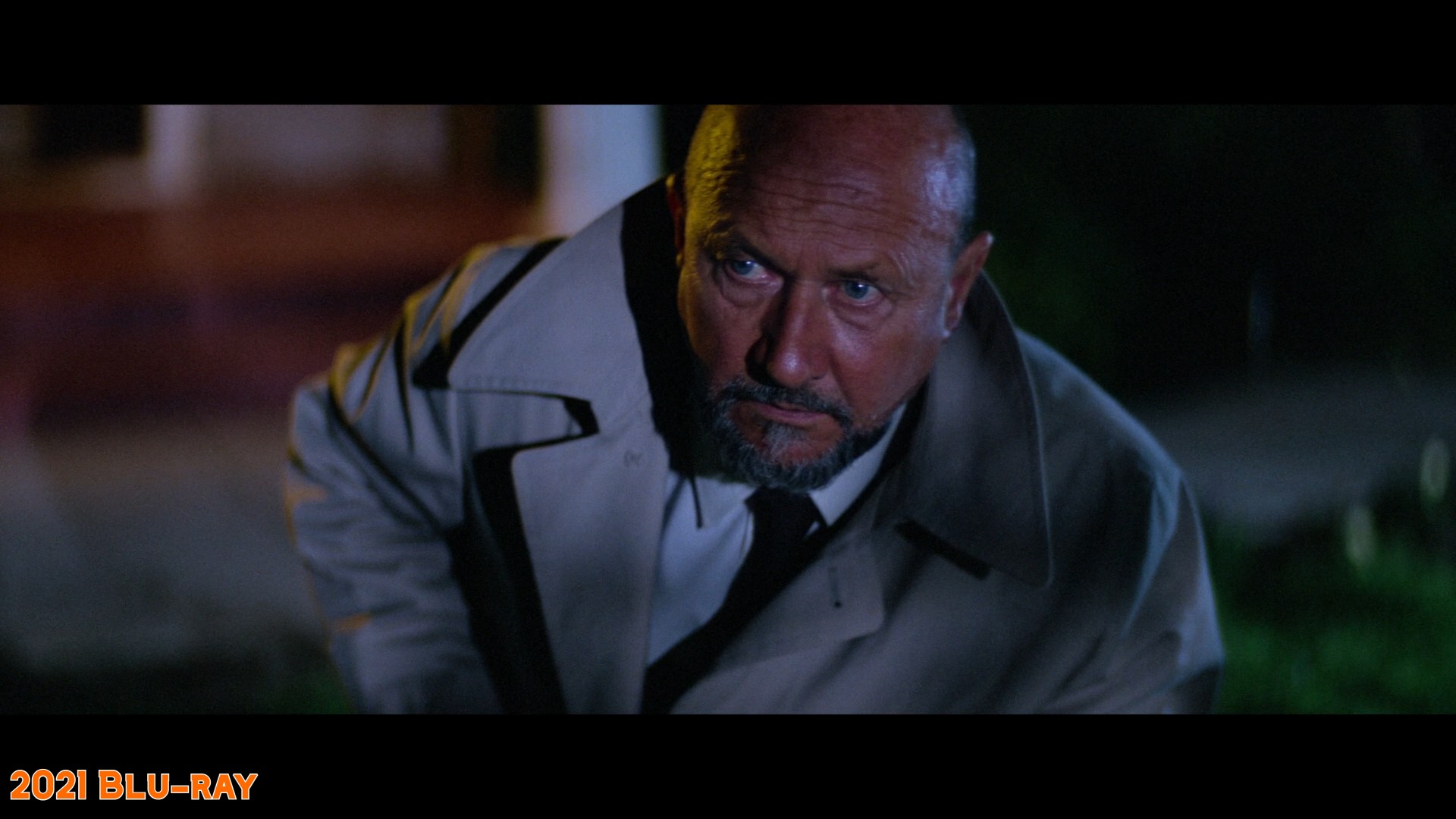 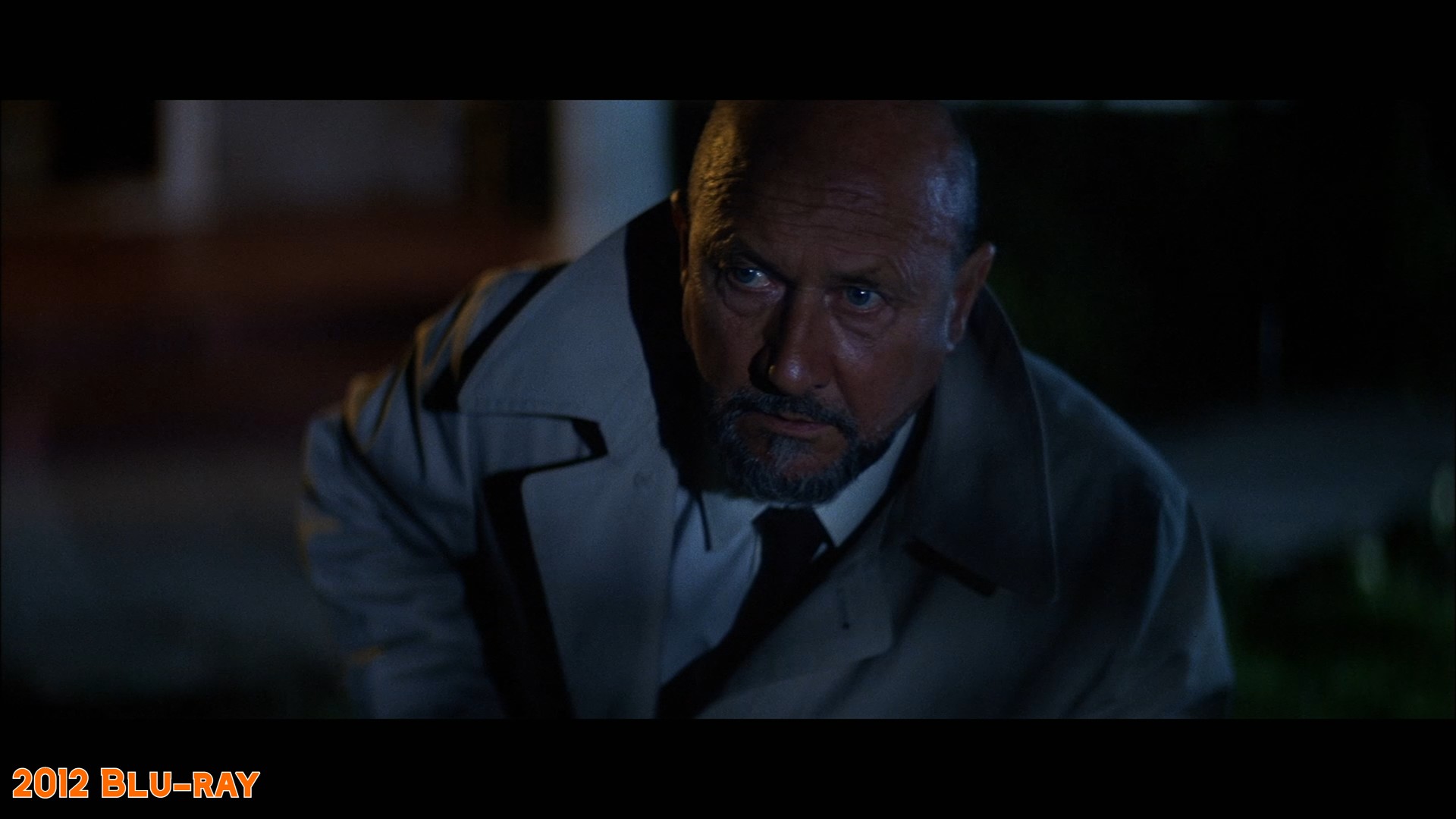 The first film was cerebral. Even as a low-budget feature it was trying to go for something about the nature of evil incarnate. Halloween II pretty much drops those psychological pretenses in favor of a gorier kill count. You get a little bit of Loomis pontificating, but that’s all window dressing to give the audience a chance to breathe between deaths. The first film had its share of intense deaths - but the sequel takes it to a new level of brutality. Some would look at this as a detriment for a sequel, but it can be argued as a benefit. This sequel is an escalation of Michael’s rage. I’d be pretty pissed after getting poked in the eye and stabbed by a random girl, and then shot by my doctor whilst falling out of a window!

Sure, admittedly, this one isn’t nearly as clever or original, but it’s still solid - even if that shot of Michael walking through a glass door still makes me laugh. Rick Rosenthal did an appreciable job working the film to feel like the first. He may not have gotten to complete his version before Carpenter took control of the edit and shot extra gore, but the elements with the new characters, the pace, all work. Carpenter may regret the familial device that would drive the franchise for the next two decades, but I felt it was necessary for this outing. It gives this sequel a reason to exist and Jamie Lee Curtis to come face-to-face with the masked killer again. Without it, Michael could just wander around and stab anyone; there wouldn’t be a need to have Curtis back in the film wearing a pretty terrible wig. 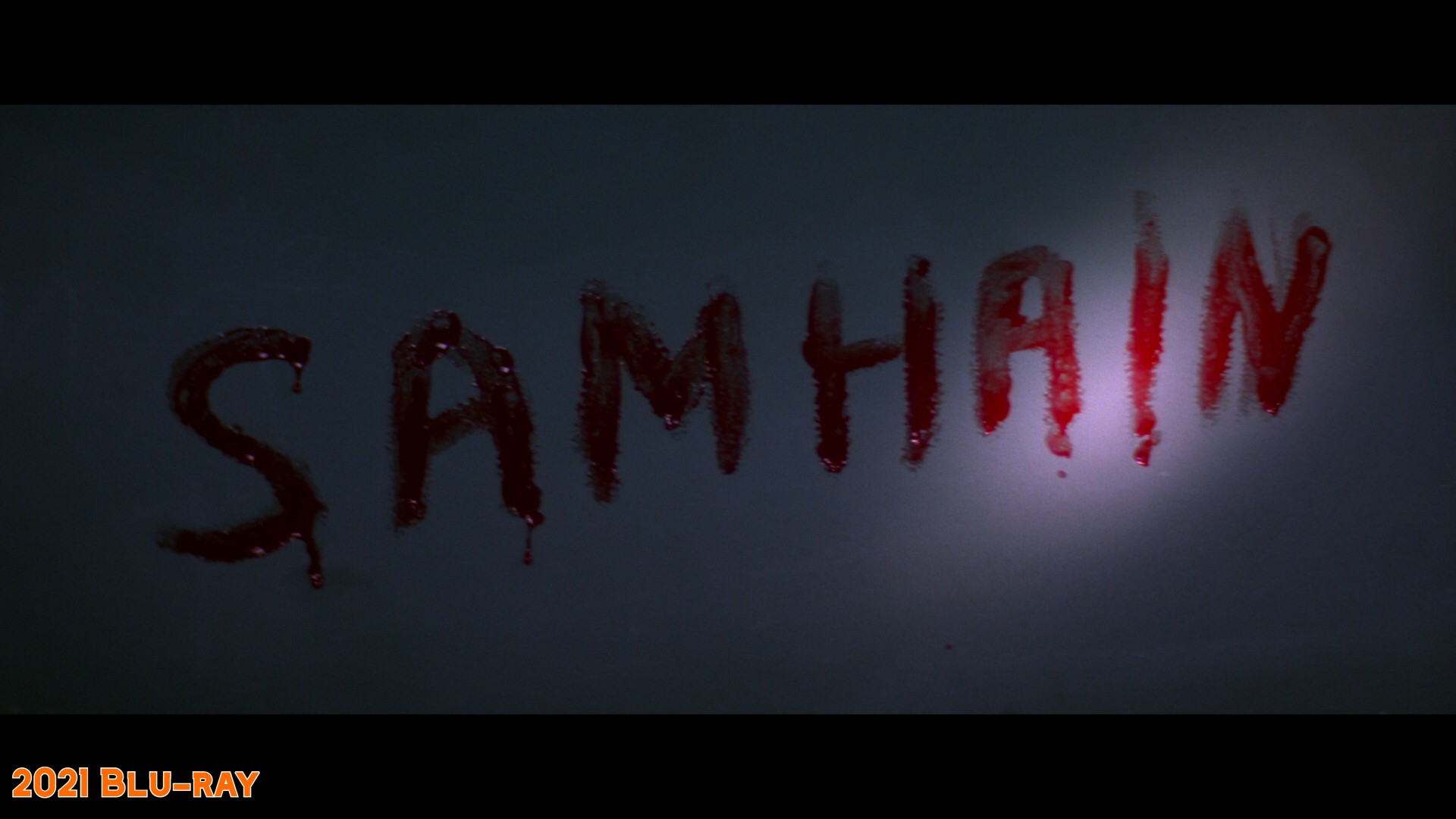 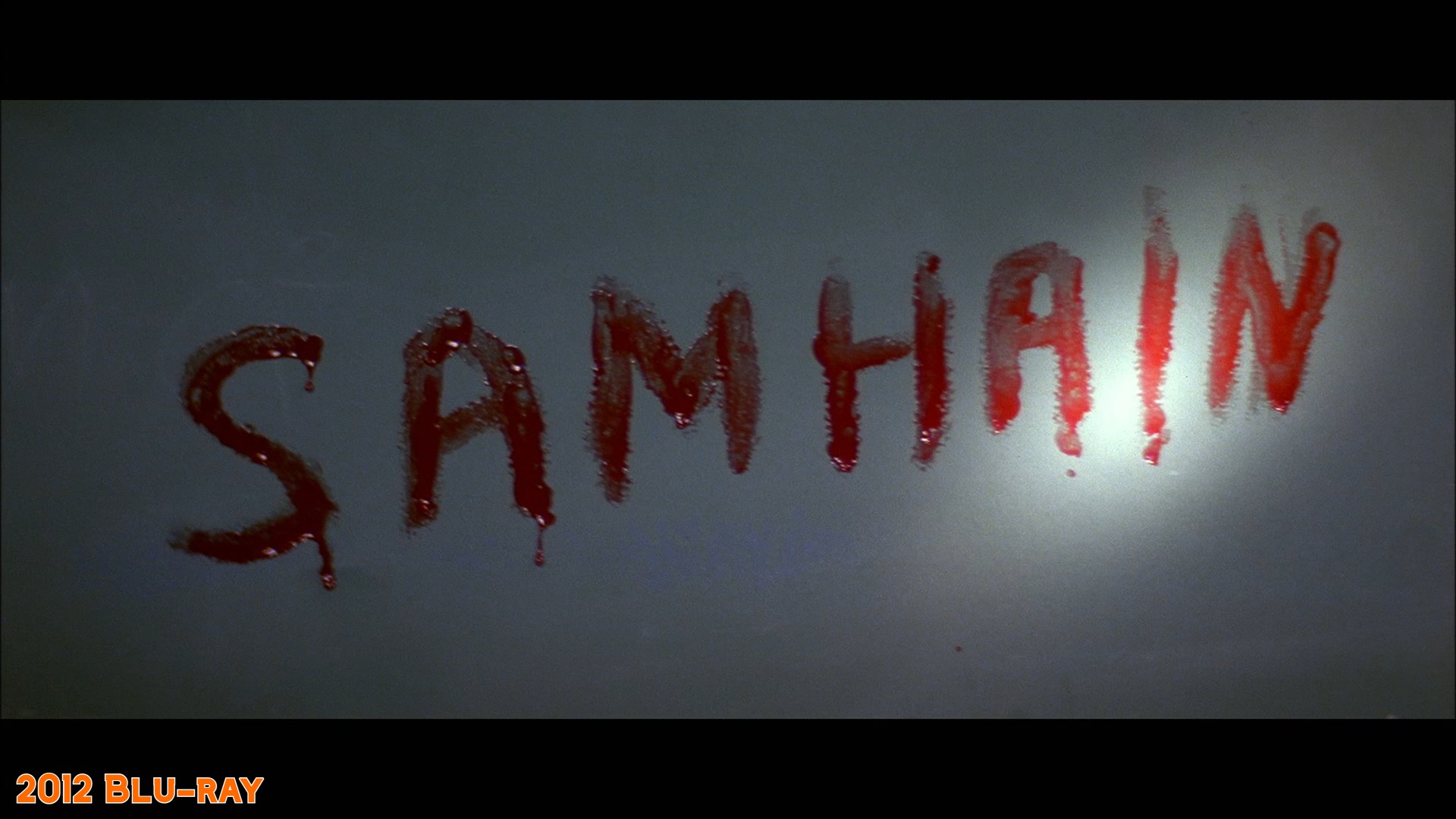 Of all of the Halloween films, this is the one I’ve seen the most. From countless viewings on WXON Detroit to numerous VHS rentals to that crappy Goodtimes disc being one of the first DVDs I ever bought - it’s just a favorite. I like the pace, I like the new intensity of Michael’s efforts, the hospital setting is damned creepy, and the cast is solid. It feels like a genuine continuation of a film that ended mere seconds before this one started.

Vital Disc Stats: The 4K Ultra HD Blu-ray
All of these new 4K Ultra HD Blu-ray releases wouldn’t be worth much without the best of the sequels - Halloween II earns a fitting three-disc Collector’s Edtion 4K UHD + Blu-ray + DVD from Scream Factory. The new 2021 scan is on the 4K disc and the Blu-ray with the DVD holding the edited Television Version of Halloween II. All three discs are housed in a hard black three-disc case with reversible insert art depicting the classic theatrical scull-pumpkin poster art. The whole set slides into a hardstock cardboard slipcase. Each disc loads to an animated main menu with traditional navigation options. 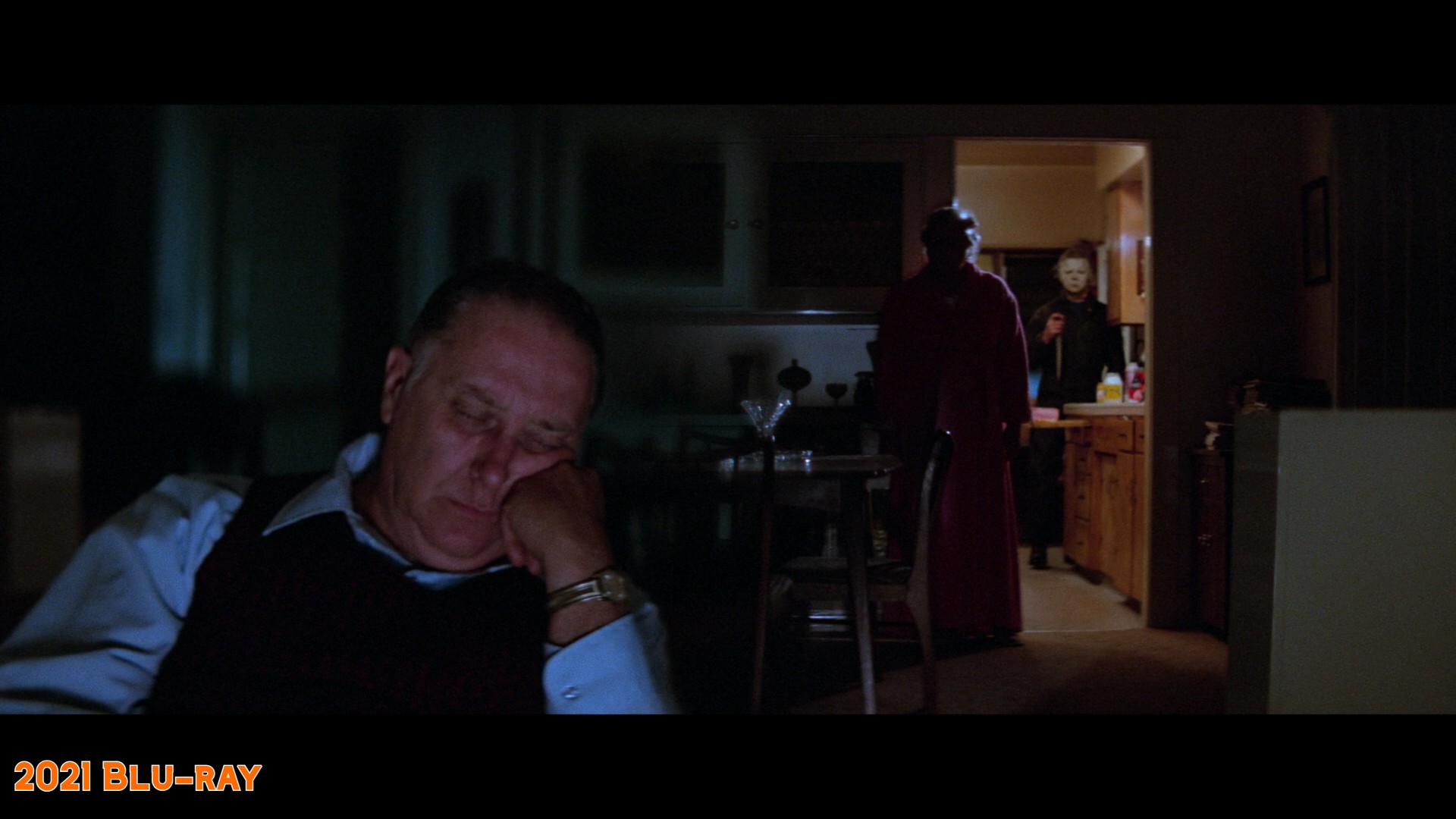 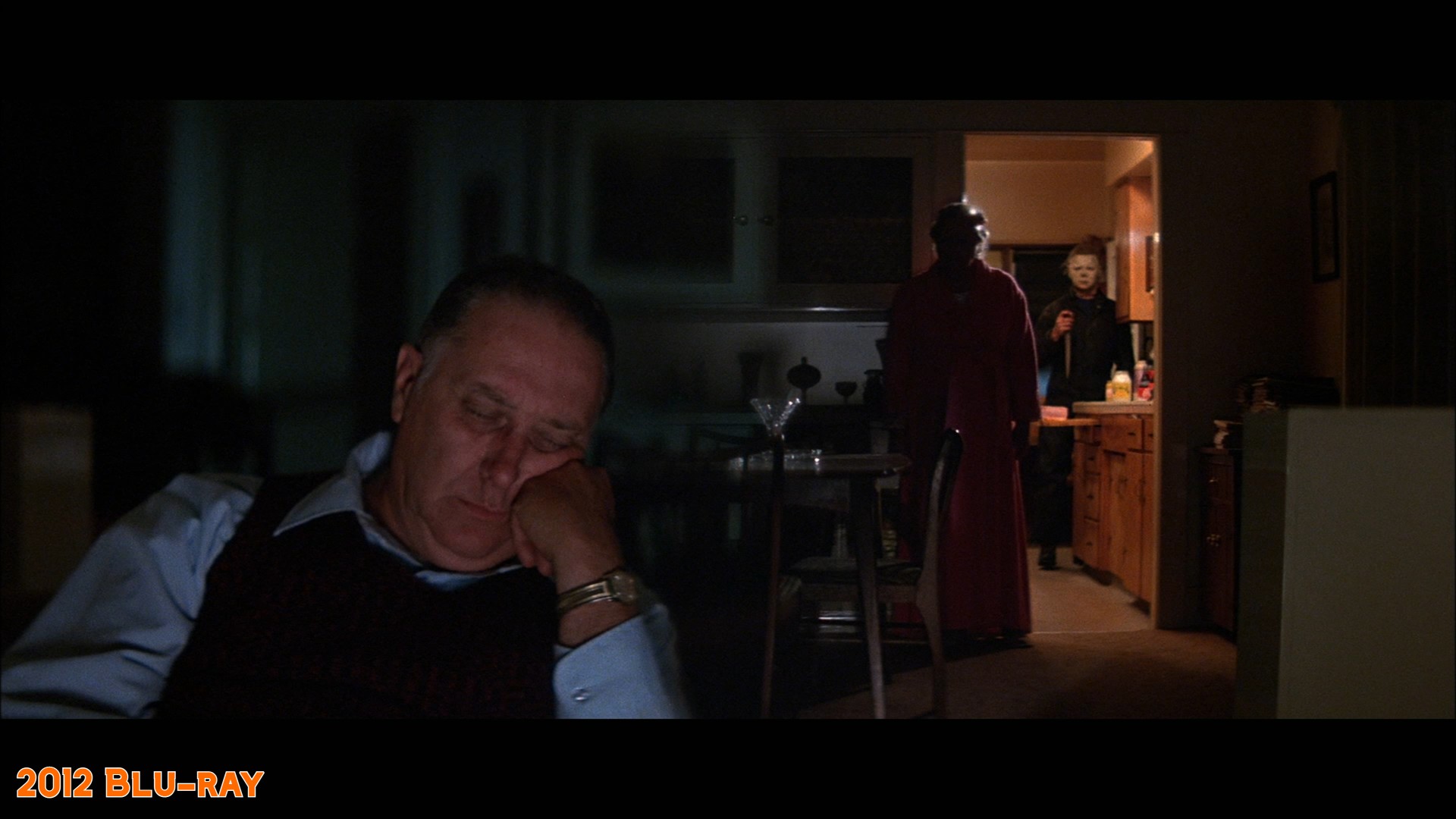 Making its 4K UHD debut, Halloween II arrives with a new 4K Dolby Vision (and HDR10) transfer sourced from a new 2021 scan supervised by Dean Cundey. I used to own the lackluster 2011 disc, but when the opportunity came I quickly upgraded for the better and improved Collector’s Edition from 2012. I never picked up the 2018 SteelBook so I don’t have that disc as a reference point. To that end, I’m very excited about this new transfer for Halloween II. Details are sharp and clear, colors pop, shadows are deep and inky, and this is honestly the best I’ve ever seen this film look.

Right out of the gate I felt like I was seeing cleaner details than before. Even the opening credits offer a clearer look at the jack-o-lantern with bolder brighter orange titles. Since this film takes place entirely at night, there are no outdoor daylight sequences to highlight, but interiors look great allowing you to fully appreciate the production design of the hospital, some chared remains, and the school where they find the knife and “Samhein” written in blood. Throughout fine film grain is retained without ever looking too noisy and no signs of DNR. 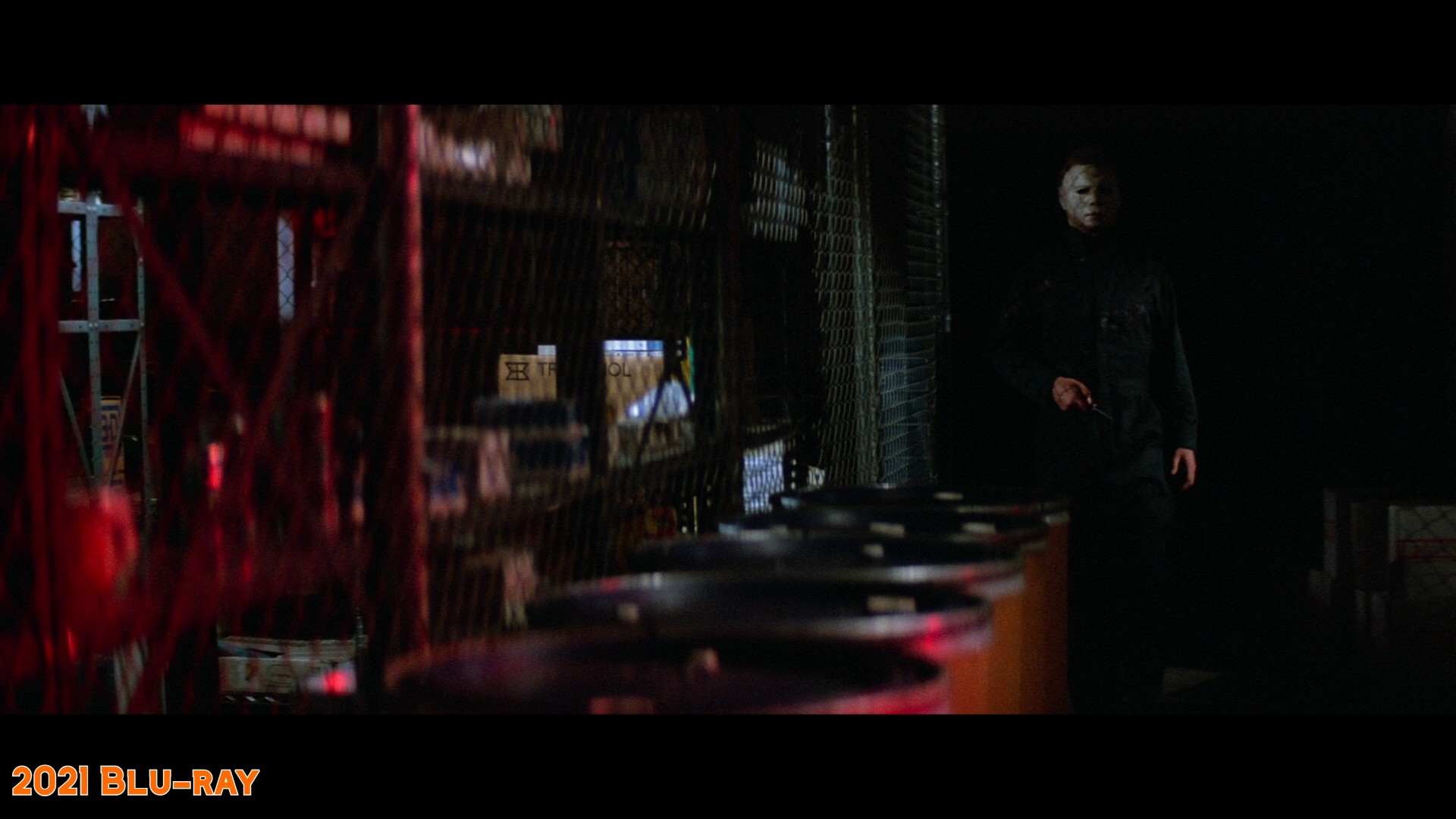 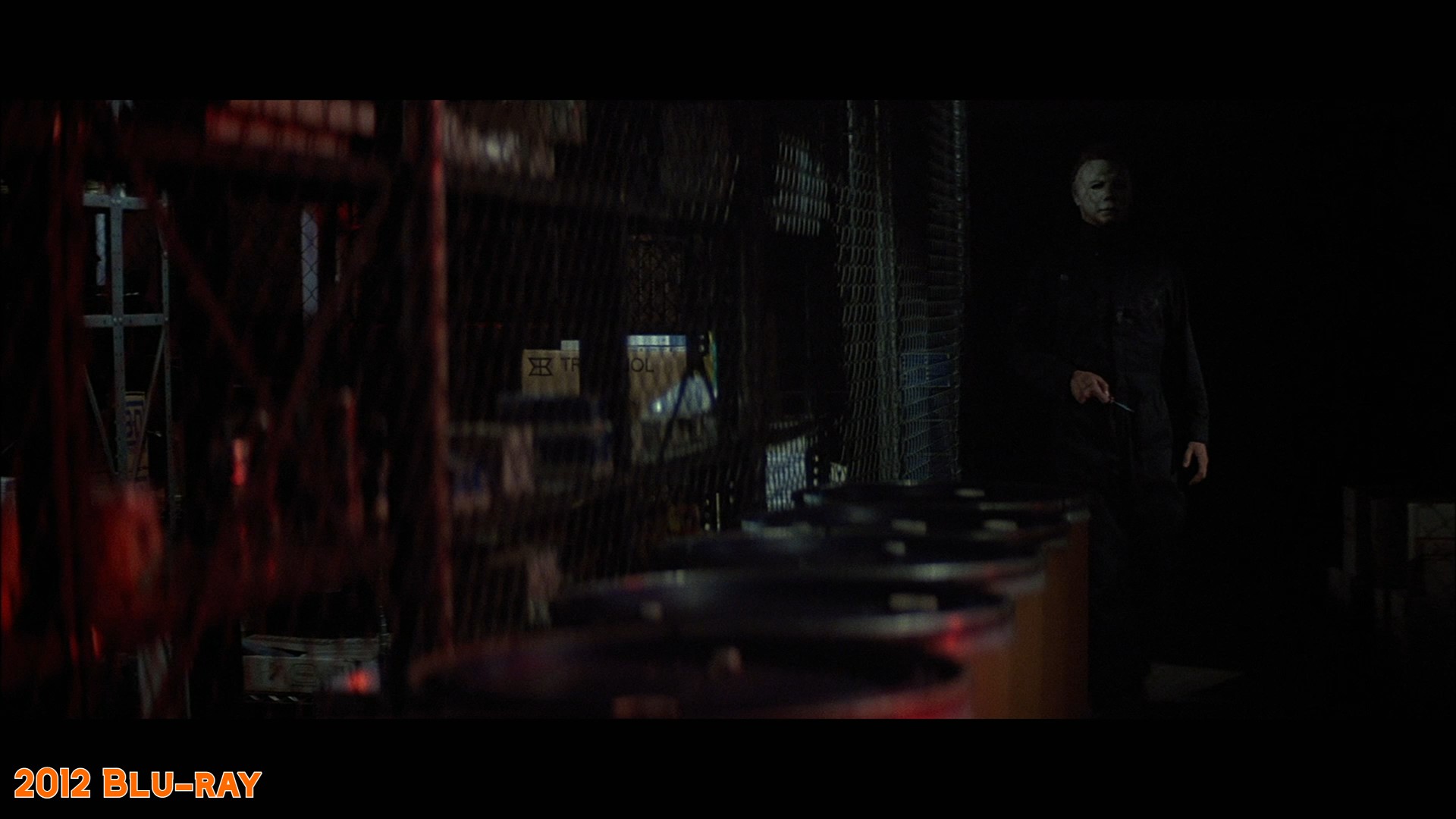 With Dolby Vision and HDR, the improvements continue. Black levels have always been a tought spot for this film in past releases - it’s really dark in places. Past releases were wither too light, or just crushed to hell and gone. I’m really happy to see that there’s a much better balance with the deep dark blacks and shadow separation. I felt like the riot scene in front of the Myers house or when the reporter is skulking around when Annie’s body is wheeled out had those deep dark black levels we want to see but much better details and light gradience in the shadows. I really liked the sense of three-dimensional depth to the image - especially in the stalking tracking shots.

Colors are also better balanced this time out than the 2011 and 2012 discs which to me always looked a little drab and lifeless. Like the other discs in Scream Factory’s run of Halloween 4K titles, there is a warmer brighter tone in several sequences but in others, it’s nice and cool. Orange flames actually give off an orange light now. Reds are a rich deep red. Blues are nice and icy. Yellows don’t get a lot of play other than some mustard-colored walls in the hospital. Whites are nice and crisp without any blooming issues. All around this is an excellent lively transfer that marks a notable improvement over past releases. 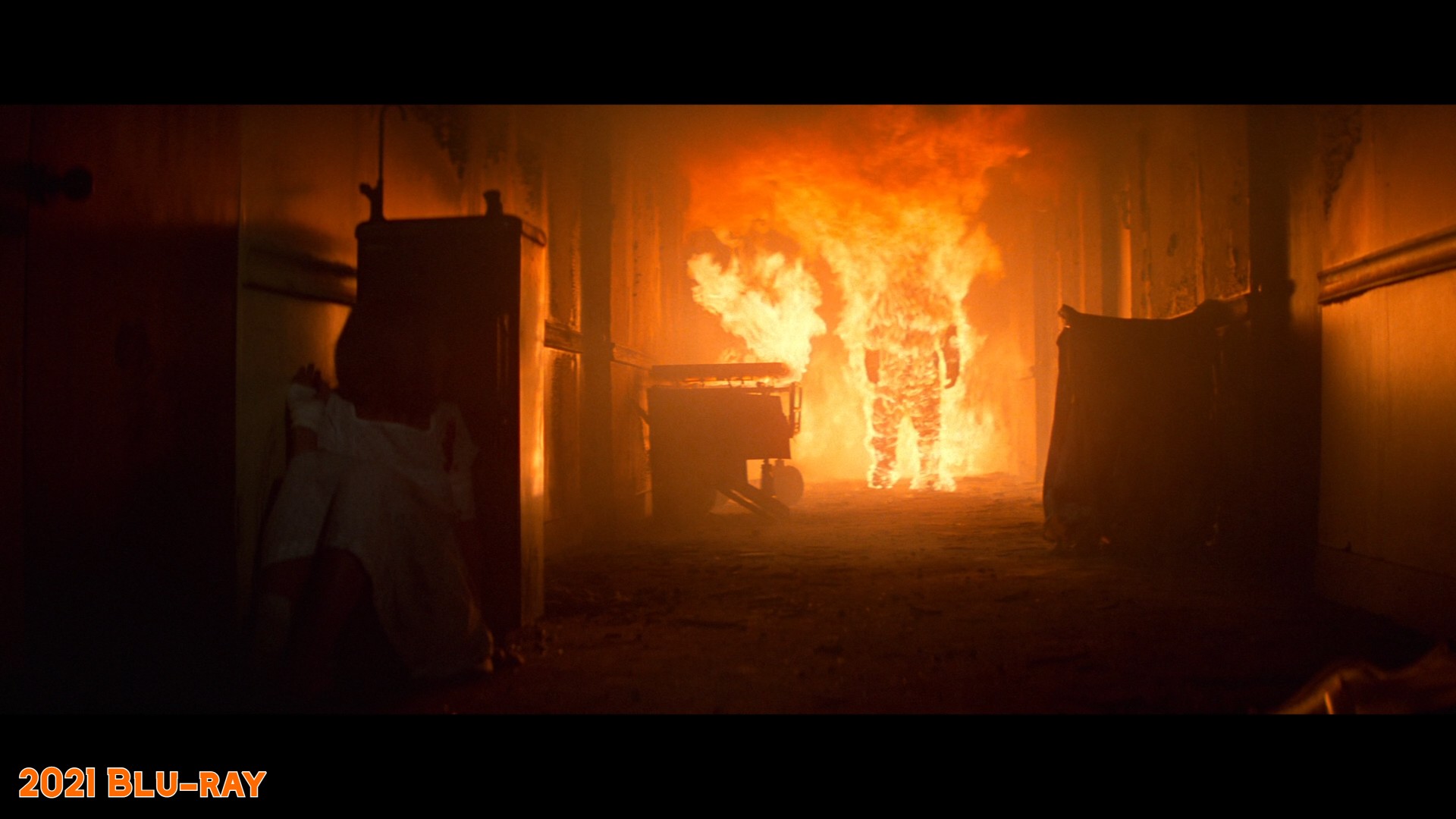 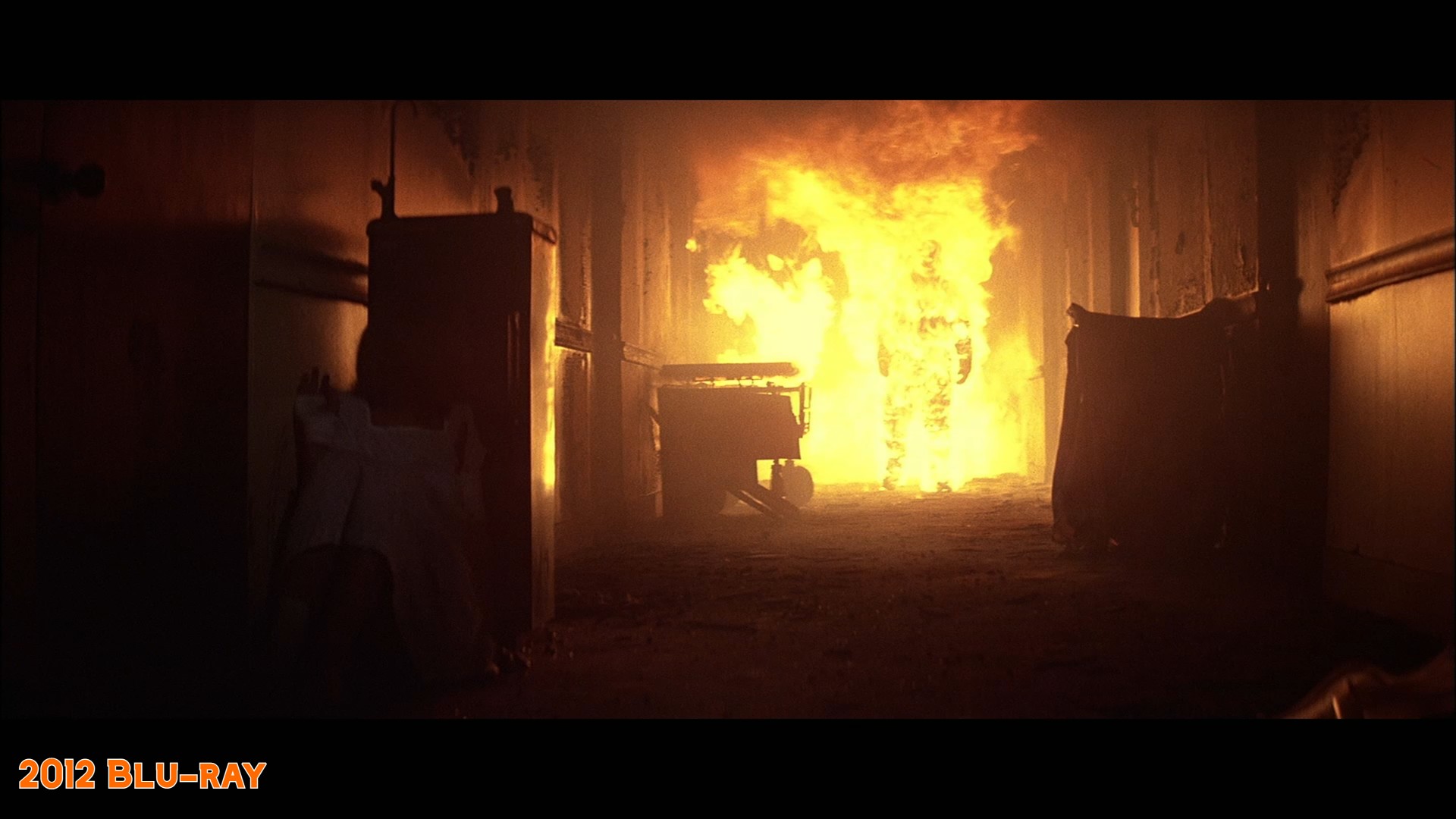 I haven’t felt the need to bring this up with the other releases, but a quick note about the included 1080p Blu-ray presentation - while I liked the color timing and how it’s darn close to the actual 4K disc, it looks a bit softer than expected. Compared to the 2012 disc, it’s not as sharp-looking. You might have noticed this from the screencaps I’ve included for this review. You get a sense of the color timing, and details are strong in the 2021 Blu-ray, they’re just not as crisp as I’d expected. I thought I was seeing things so I did a long disc flipping session between the 2012 Blu-ray, the 2021 Blu-ray, and the 4K disc. The 4K disc doesn’t have this issue and offers much cleaner details over the 2012 disc. So, fair warning there if you're buying this set for the 1080p Blu-ray and aren't rolling 4K yet. I hope to be able to rip the 4K disc and update the image selection for all of the reviews very soon so you get the full range of details. 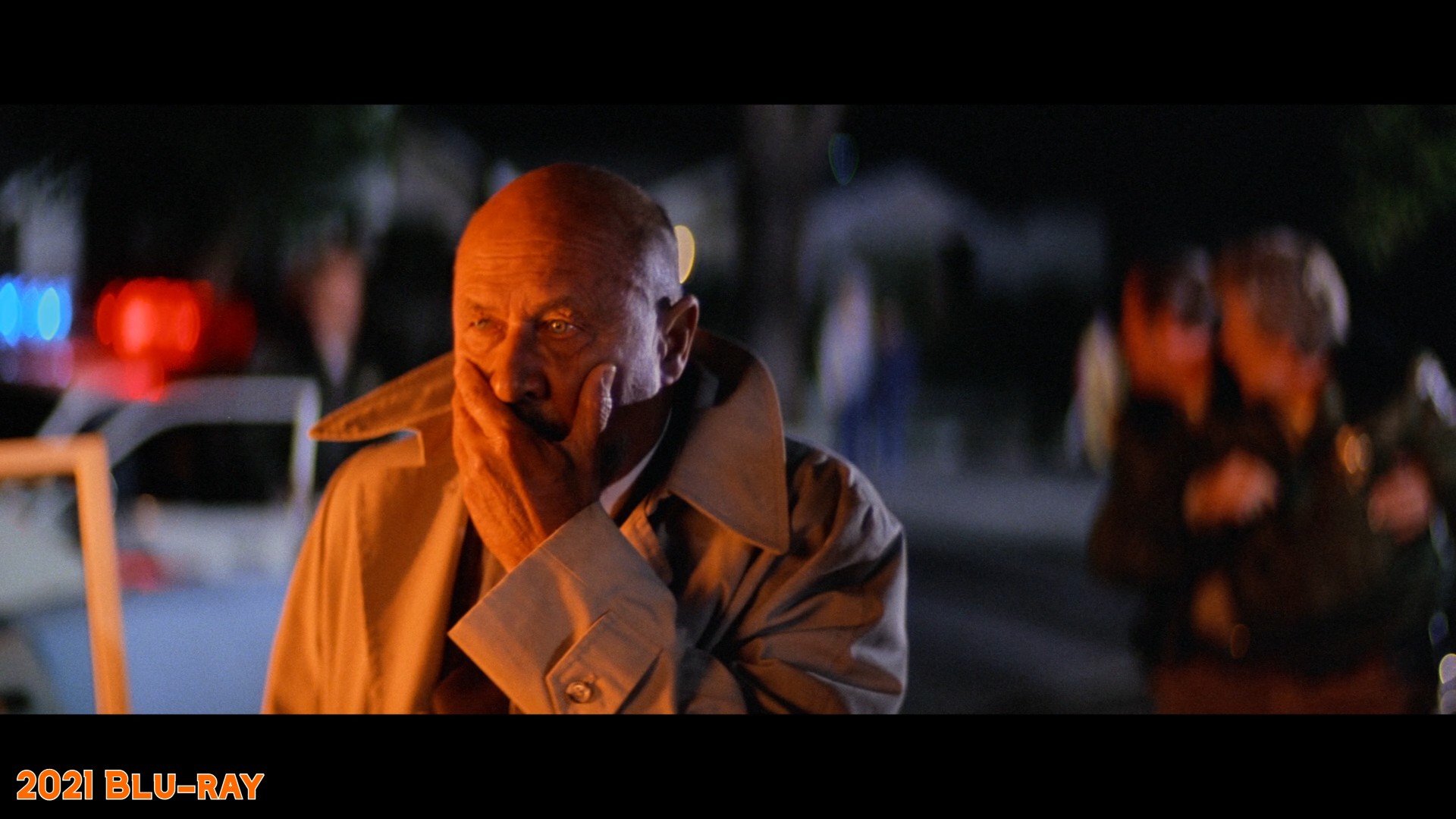 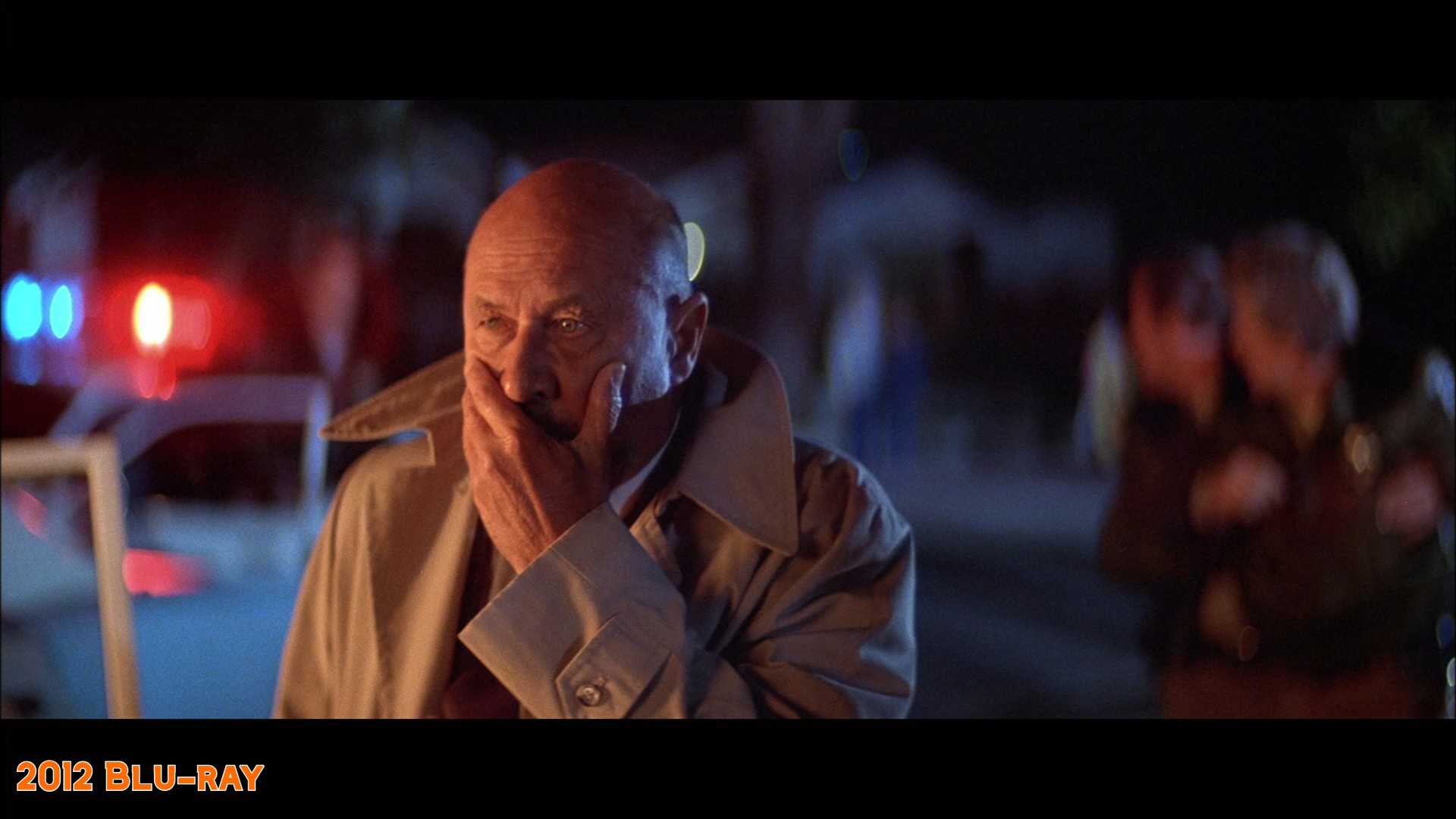 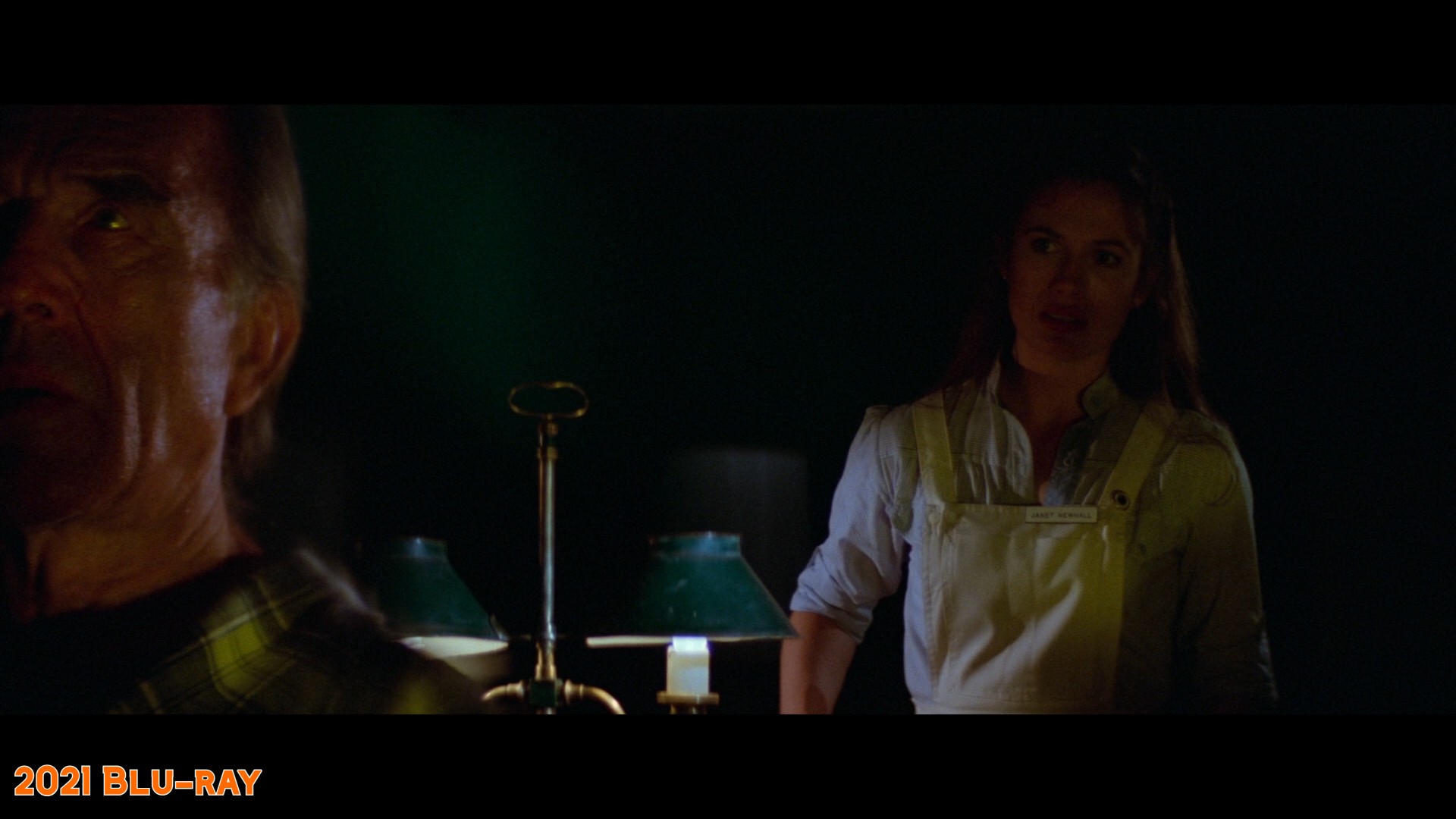 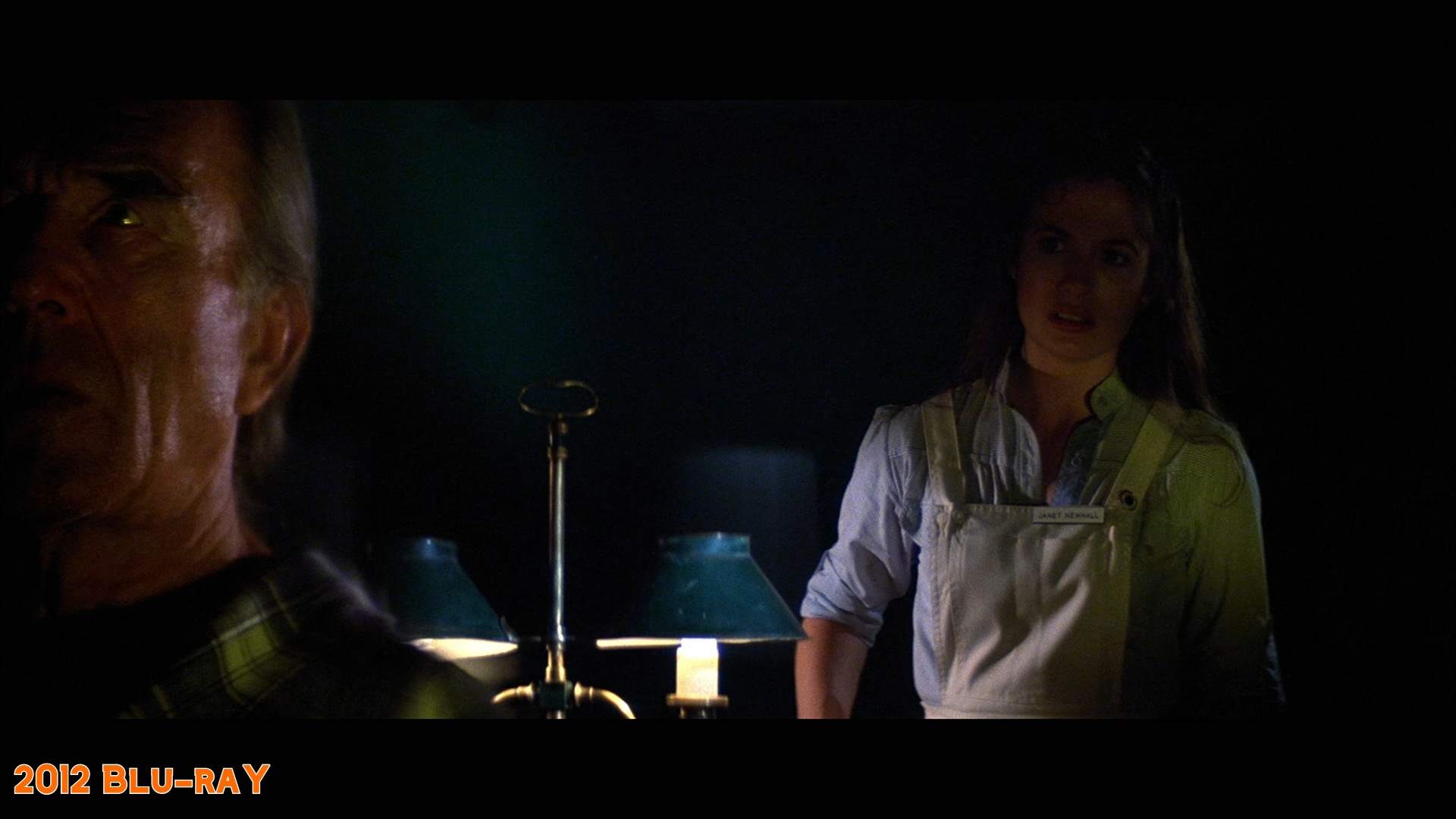 Once again, Scream Factory loaded up this disc with a variety of audio options for you to chose from. You get the solid DTS-HD MA 2.0 mix and the DTS-HD MA 5.1 mix that sound virtually the same as the 2012 disc. Which is great. Of that generation of Halloween releases, Halloween II certainly had the best of the bunch in its pocket. The 2.0 is a strong mix and the 5.1 track gave a nicely immersive surround experience.

Now we have a new Dolby Atmos track that essentially takes all of the best aspects of that 5.1 mix and dials them up. Height channels are active most of the time giving rooms or corridors extra echo, but that big car crash and explosion and the finale get a lot of great object placement. It’s great to hear those screeching tires slide across the soundscape into that fan followed by a huge explosion! Dialog is well represented here without any issues. The more 80s-skewed synth John Carpenter/Alan Howarth score comes through really filling up those front and side channels. Imaging was just fine for this one, I didn’t feel the need to play it loud - but I wanted to play it as loud as I could without waking up my napping kid! There are a couple of stretches where things feel front-loaded, similar to how they did for the 5.1 mix, but when the mix comes alive, it’s a nicely immersive experience!
DTS-HD MA 2.0 - 4/5
DTS-HD MA 5.1 - 4/5
Dolby Atmos - 4.5/5 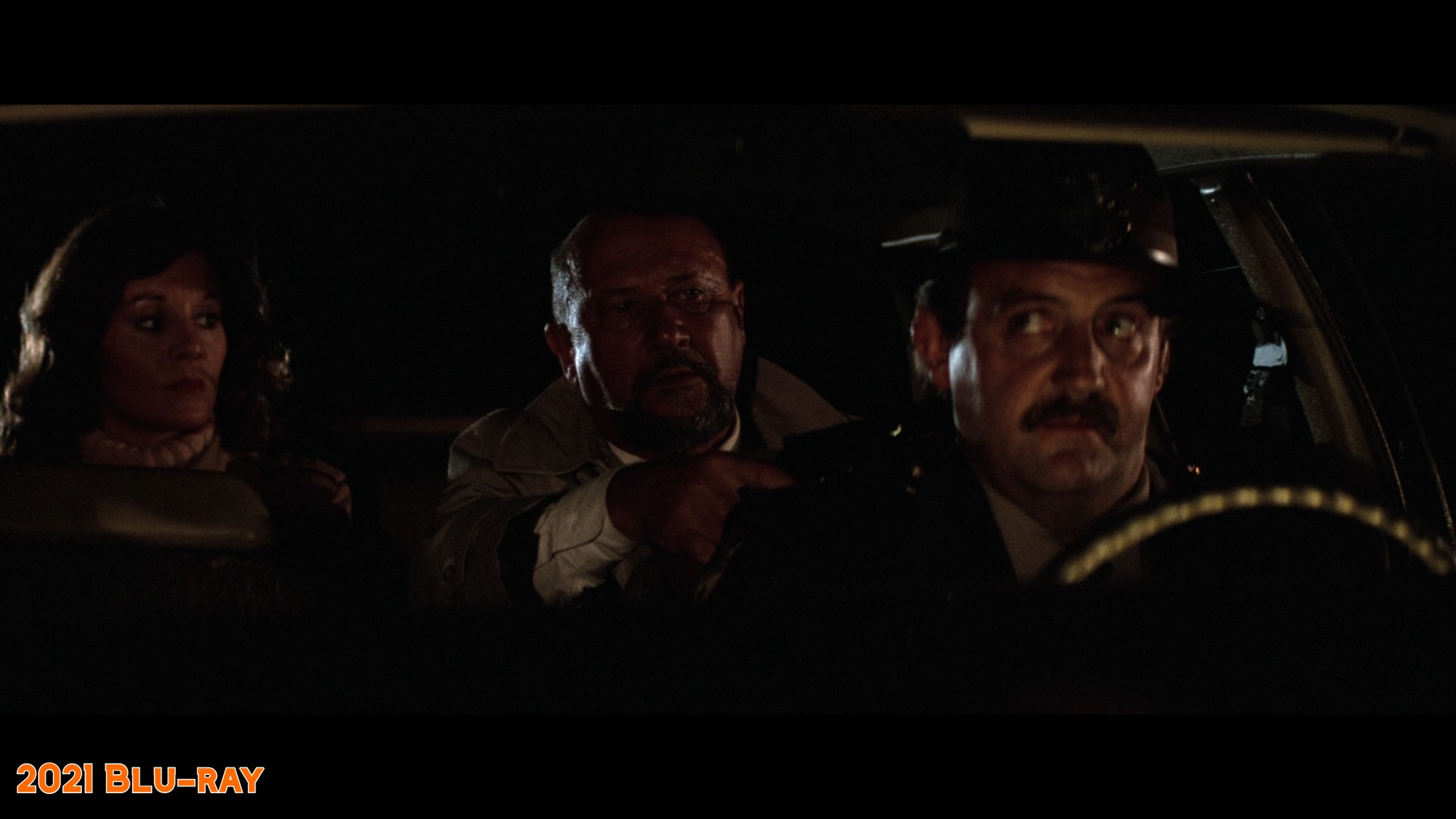 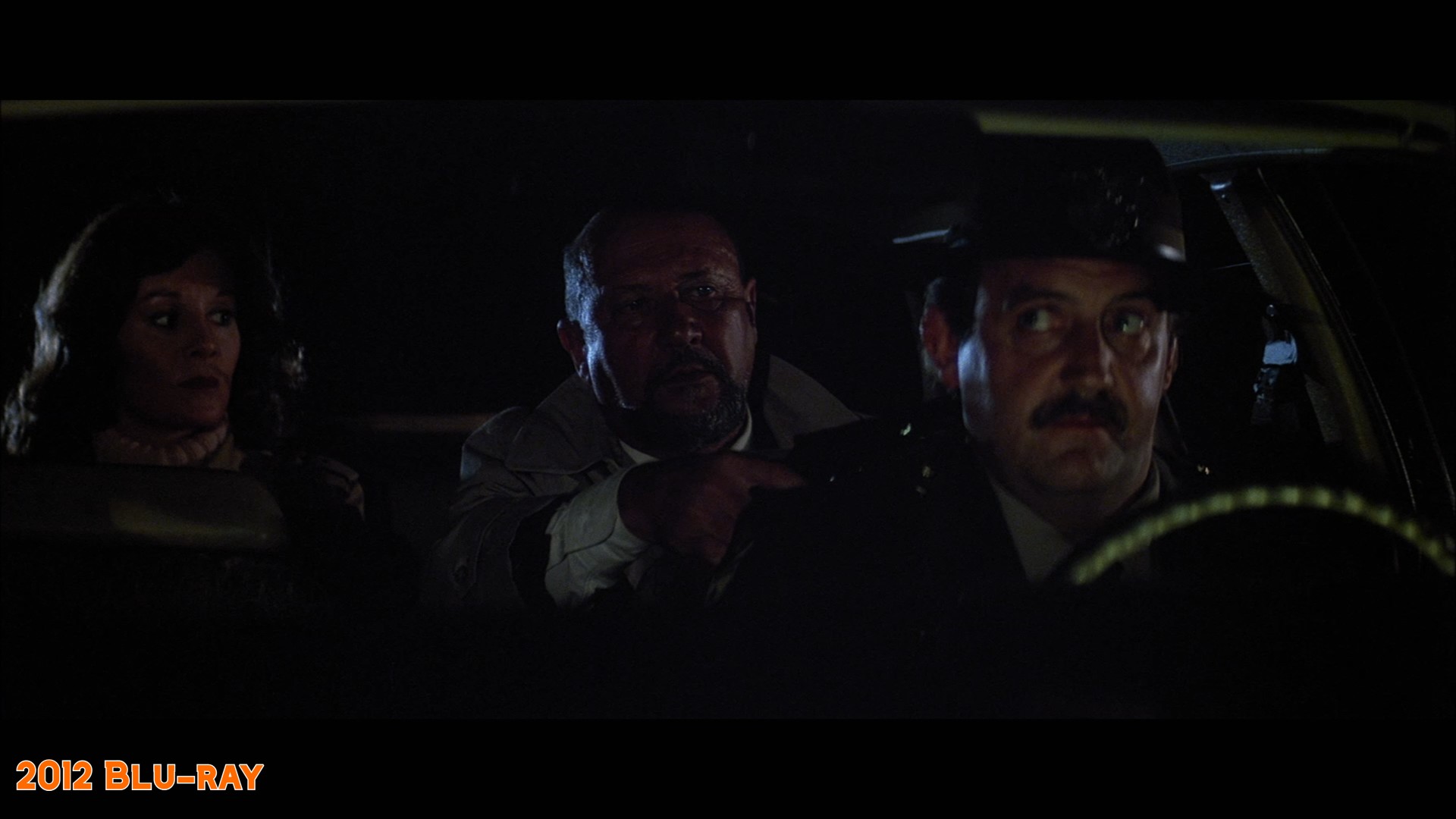 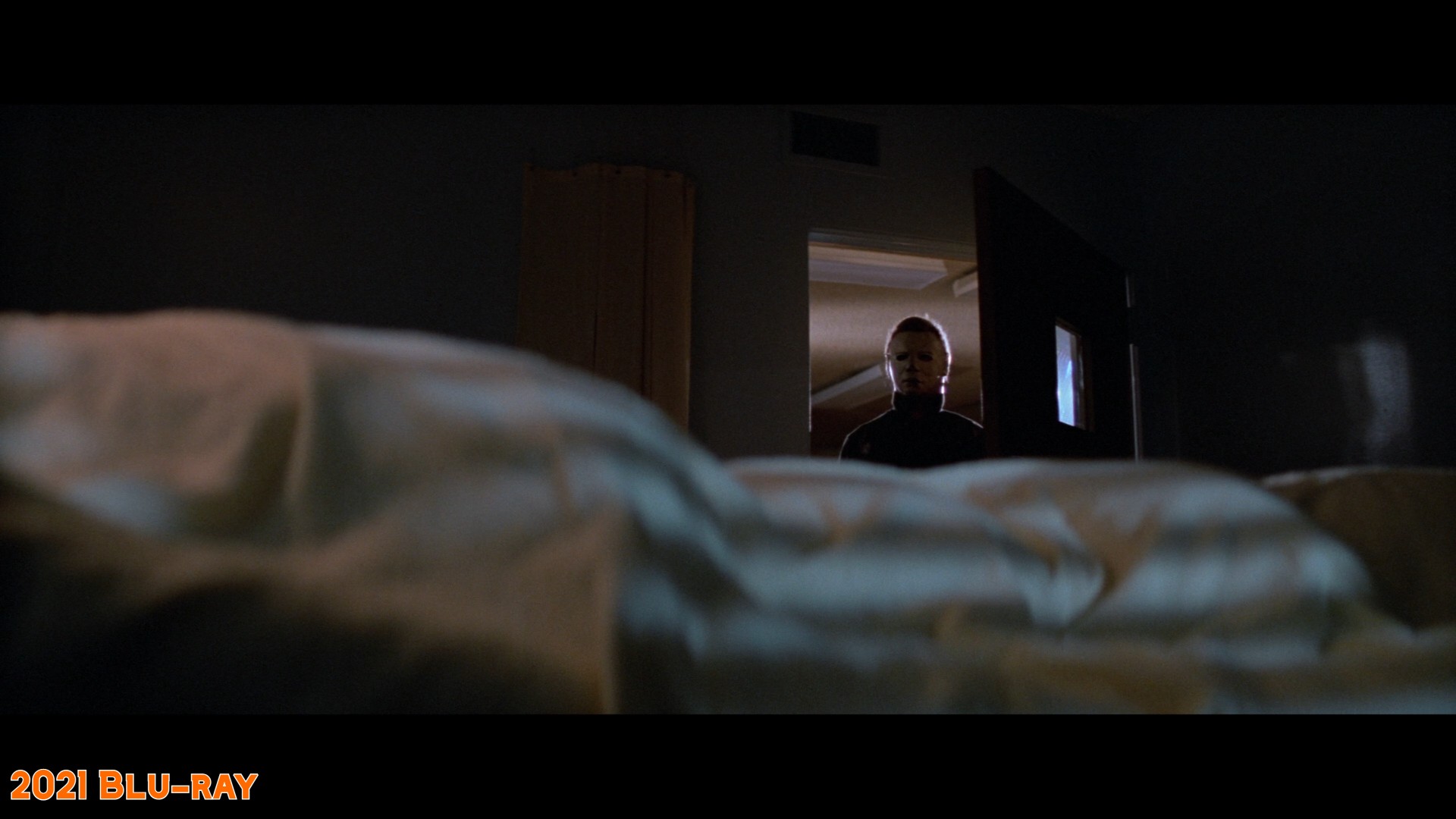 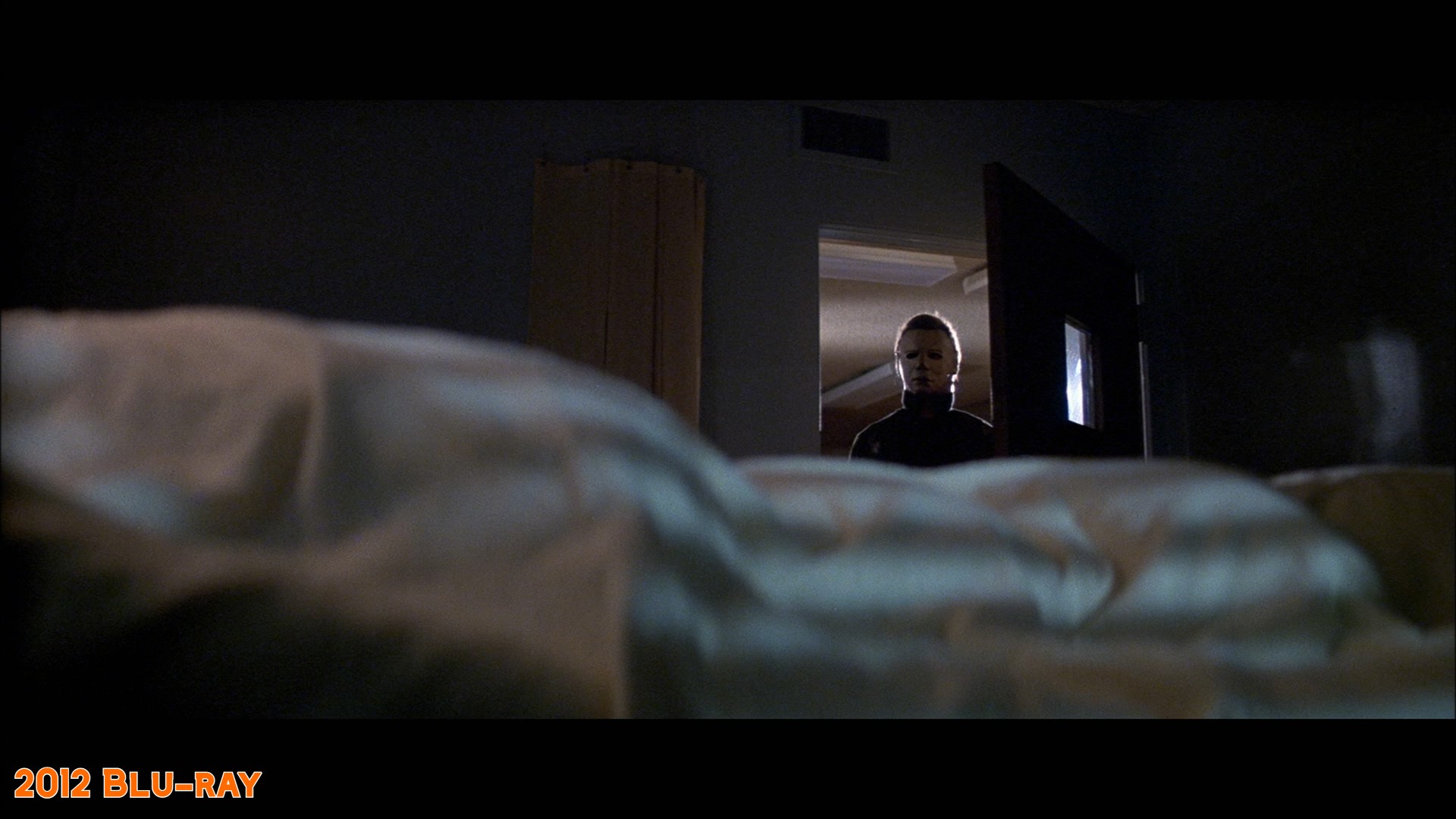 Again, Scream Factory has done a damn fine job of assembling a vast selection of bonus features to pick through. The audio commentaries are great listens if you haven’t gone through them before. The making of materials is nice to glance through again, the deleted materials are interesting to see where the movie could have gone and of course, the television cut is a great inclusion. It’s too bad we haven’t gotten a restored version of this edition, but it’s still nice to have even in SD.

Now unless I’m blind, on the case artwork, a new interview with production manager Jeffrey Chernov was listed, but I’d be damned if I can find it anywhere on these three discs. It doesn't appear to have made it to the final disc. 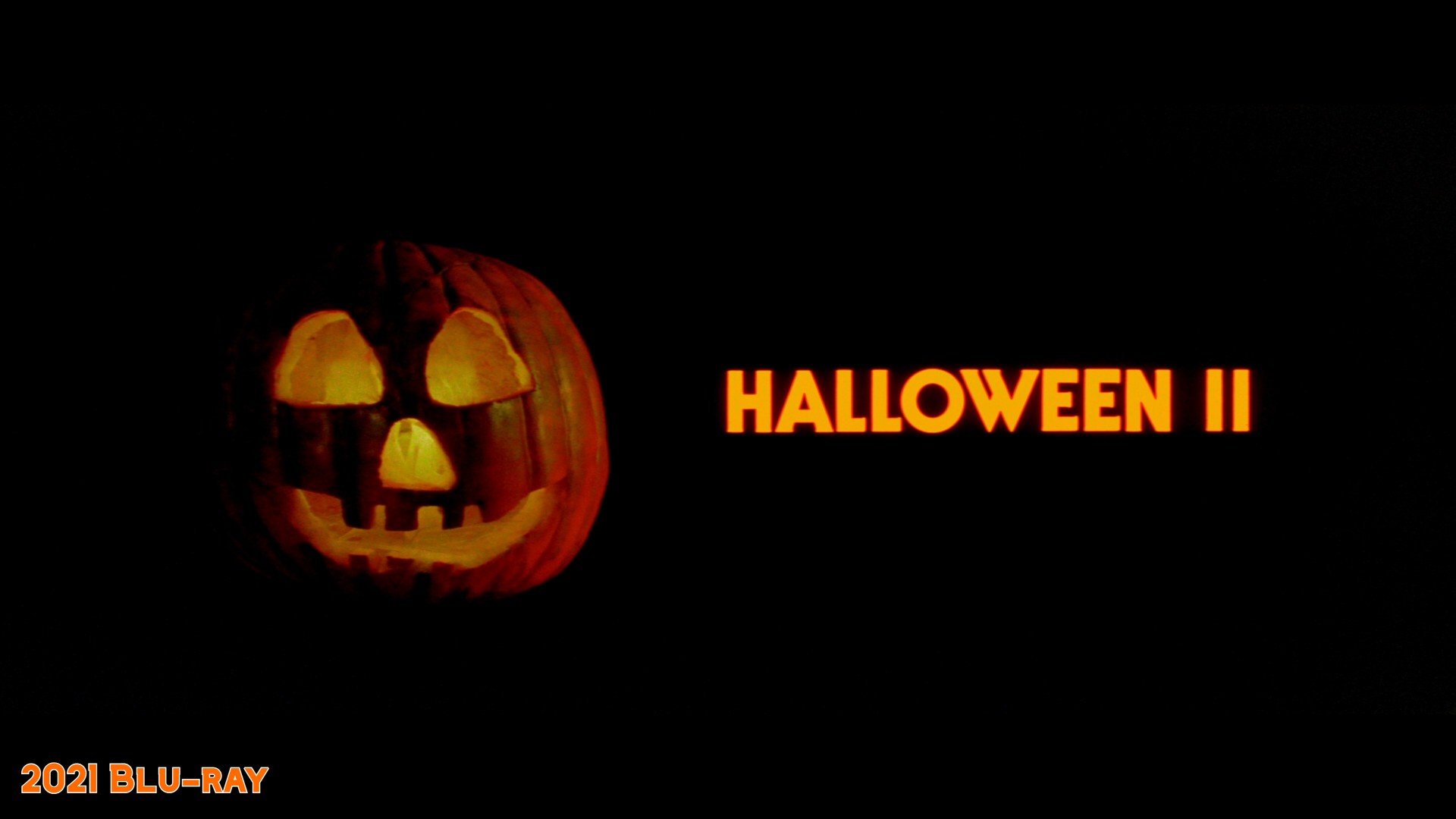 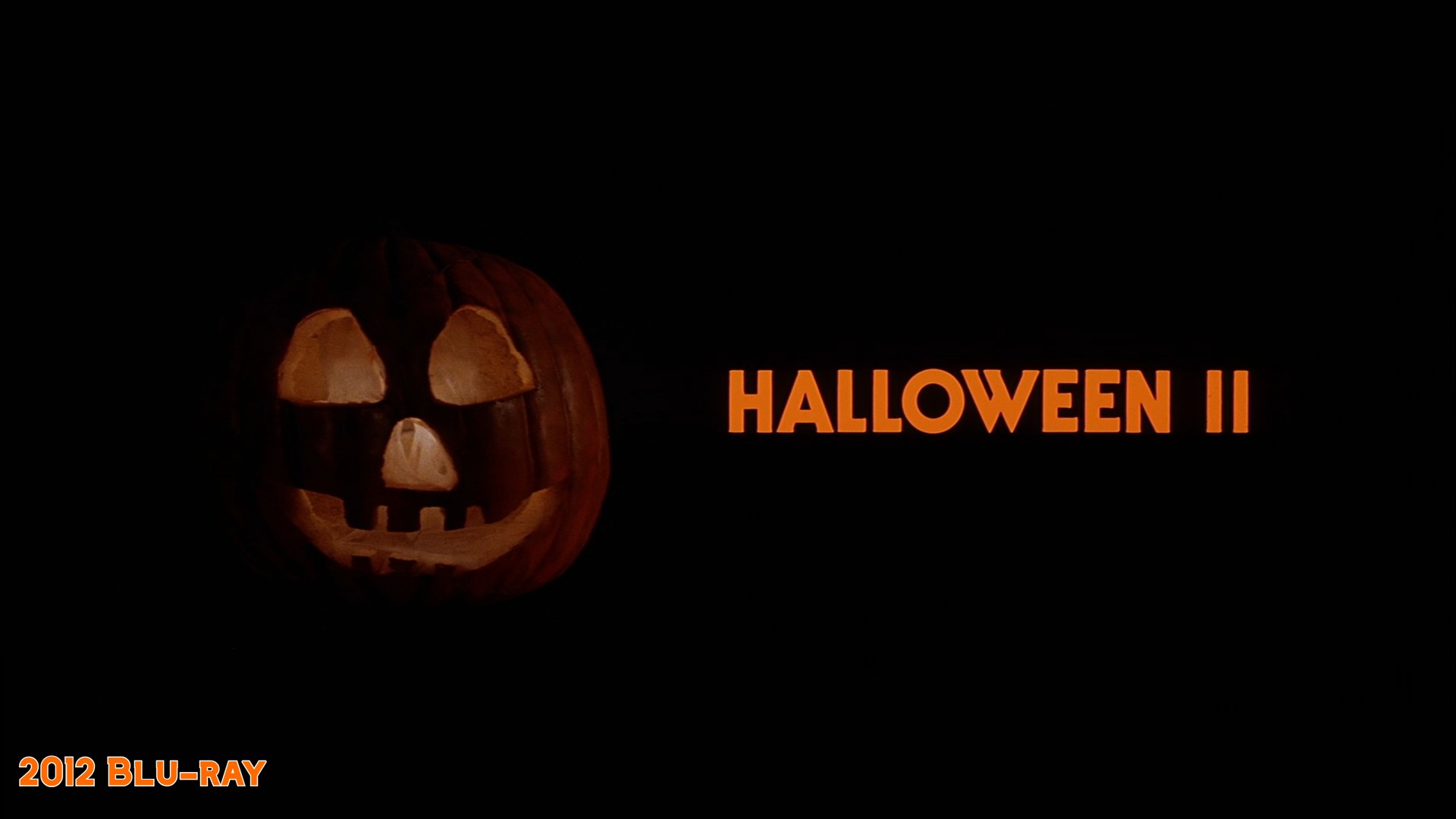 Halloween II is the special kind of rare sequel that picks up the action a scant few seconds after the conclusion of the previous film. While it may not be as strong as the classic first film, it’s a solid follow-up, damn creepy with some intense sequences and a much larger more brutal kill count.

Scream Factory upgrades the continuation of Michael’s rampage to 4K with an excellent 4K Dolby Vision transfer joined with a moody and atmospheric new Dolby Atmos audio mix. The included Blu-ray may be a tad softer than I’d expected but it’s still a solid transfer. Bonus features are extensive well worth picking through if you haven’t done so already. Highly Recommended