The chills and thrills continue with the thematic sequel Halloween III: Season of the Witch. Separate from the Michael Myers canon, the film is a bit weird at times but writer/director Tommy Lee Wallace finds a nice and creepy energy to create something unique. Scream Factory gives this third film of the franchise another round on home video with it's first 4K Ultra HD Blu-ray with a new scan, Dolby Vision HDR, a respectable Atmos audio track, and a nice collection of bonus features. Recommended

We previously reviewed Halloween III: Season of the Witch back in 2012 for Scream Factory’s first Collector’s Edition Blu-ray set.

In the dead of night, an old man carrying an orange Halloween mask is admitted to the hospital. Because the old man was delirious, Dr. Daniel Challis (Tom Atkins) ordered him sedated. Mere moments later, a man in a suit walks into the hospital and into the old man’s room and brutally murders him, and then proceeds to set himself on fire. Together with the old man’s daughter Ellie (Stacey Nelkin), Challis aims to find out why this man was murdered and how it all connects to a random Halloween mask made by the popular Silver Shamrock novelty company. 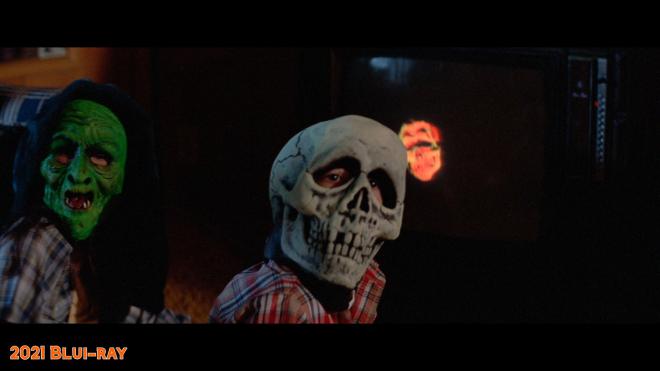 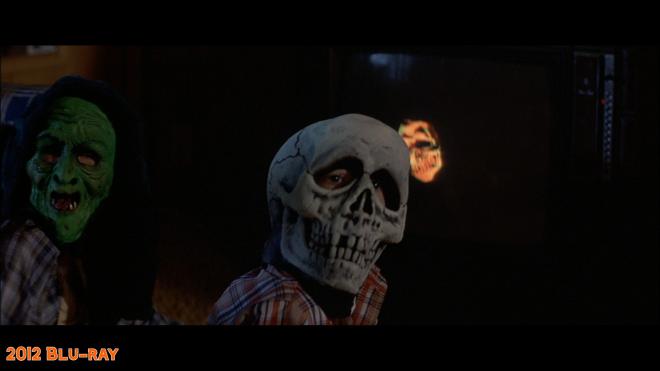 Like my colleague M. Enois Duarte, I’ve always had a soft spot for this one. Growing up it was the film of this franchise that always felt like it was on WXON TV 20’s Thriller Double Feature presentation on Saturday afternoons. Admittedly the nostalgia runs deep with this film, the idea that my Halloween mask could kill me was a terrifying thought.

As an adult, I still appreciate this bonkers movie. I understand a studio wanting to keep a franchise alive, but after its main villain was effectively permanently killed, that’s a difficult challenge. The idea of thematic sequels was a smart notion and I feel like writer/director Tommy Lee Wallace was on the right track. Coupled with Carpenter and Hill producing with Carpenter’s chilling score - it’s an entertaining movie. And I stand by the notion that this one has one of the most shocking endings. It also has one of the best and worst earworm pieces of music with that damned television commercial! Certainly not the greatest film ever made, and it is a fun weird entry in the franchise, but I always pull out Halloween III: Season of the Witch every year. 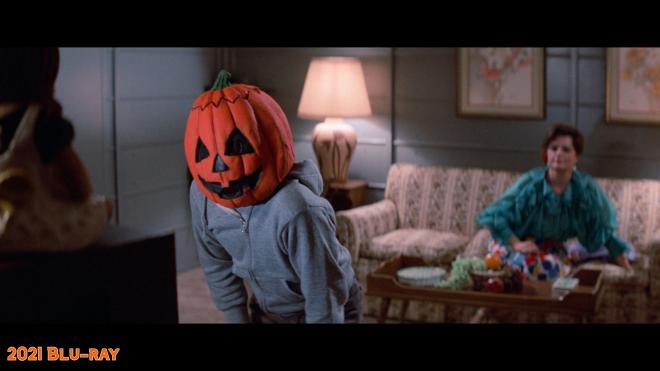 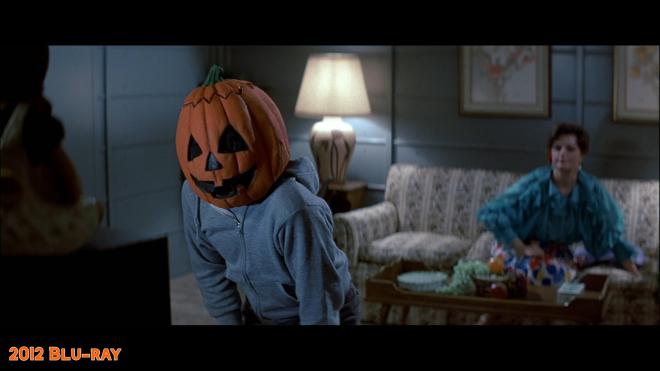 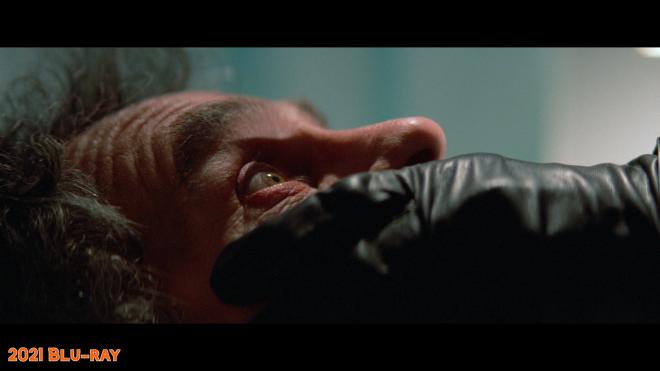 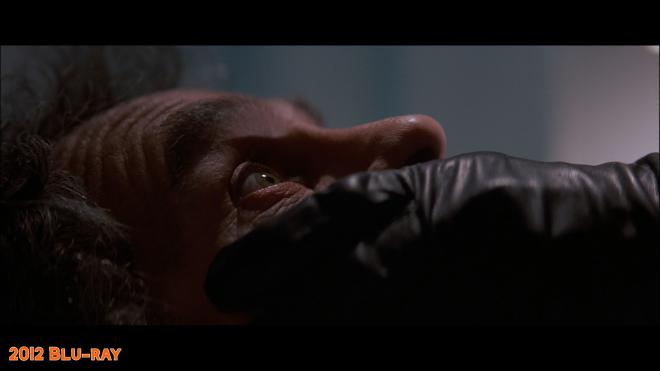 Before I dig into this review, my only basis of comparison to this new 4K Ultra HD Blu-ray transfer is the old 2012 Collector’s Edition disc. I never picked up Universal’s solo release from 2015 or Scream Factory’s SteelBook from 2018. I had that 2012 disc in the Halloween Collection Deluxe set and just didn’t feel the need to upgrade or repurchase. I enjoy the movie but not that much.

To that end, this 2160p 2.35:1 Dolby Vision (HDR10 included) transfer is very impressive. Given its stature within the franchise, Halloween III just never seemed to get much home video love until now. Sourced from a new scan of the OCN, the amount of detail and clarity really popped. I felt like I was seeing new details in facial features, costuming, and the set design and production values. Especially when the action moves to Santa Mira, I felt like I was spotting more little pieces of important detail in bricks, the factory, signage, and those slick Halloween masks. There are still some soft shots here and there where details don’t quite come alive, but those have always been there. Throughout there is a natural and organic film grain appearance. 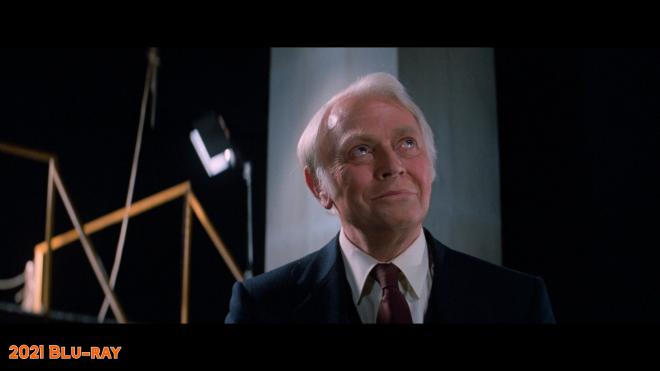 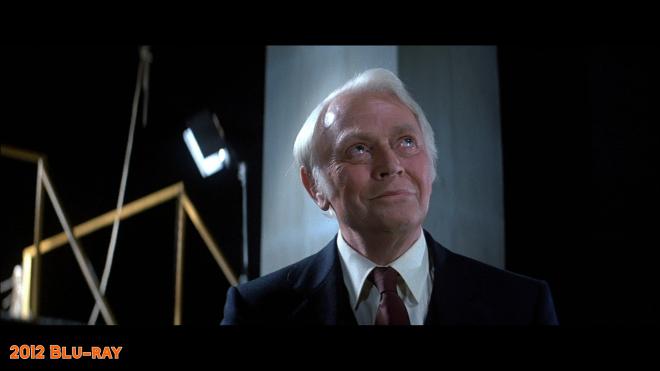 With Dolby Vision HDR (and HDR10), colors this time out are much more healthy with an overall brighter appearance but still maintaining deep incky blacks and nuanced shadow gradience. Oranges are much more natural and bold. Reds and Blues get a lot of time in this film given all of the blood and the signature Dean Cundey cinematography. Greens also pop a lot better - the sign leading into Santa Mira is nice and Irish green. The bricks in the factory look more natural deep red than the light burnt orange tone of the 2012 release. Skin tones are healthy, there are a couple of odd shots where folks could look a bit too sunburnt pink, but those are really only fleeting moments.

Black levels and contrast also feel vastly improved over the 2012 disc. Image depth is much stronger - especially during the dark shadowy scenes of Challis creeping around Santa Mira or when he’s getting information out of the drunk. Whites also look brighter and more natural than before - the walls of the motel are a particular standout. Elements are in terrific shape. There are still a couple of speckling pops here and there, but they’re hardly noticeable and certainly not as abundant as the 2012 disc. 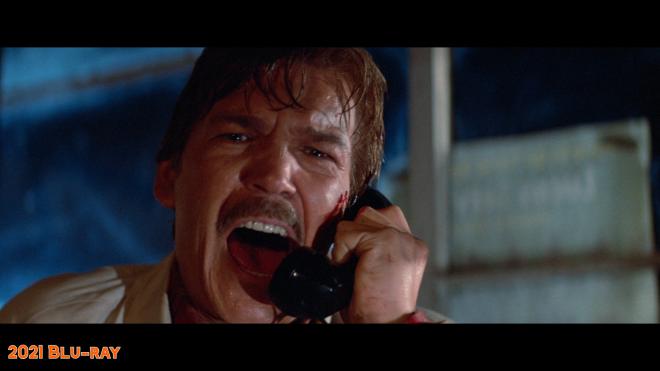 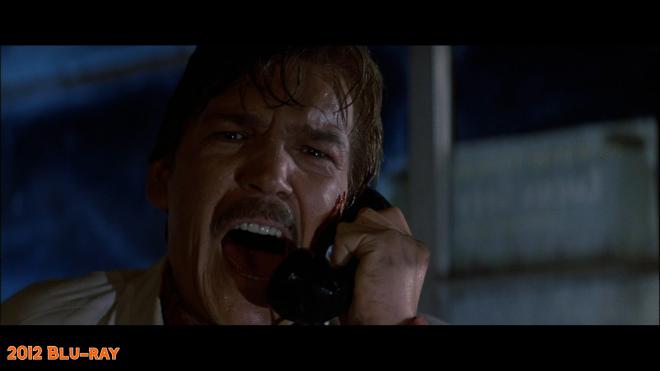 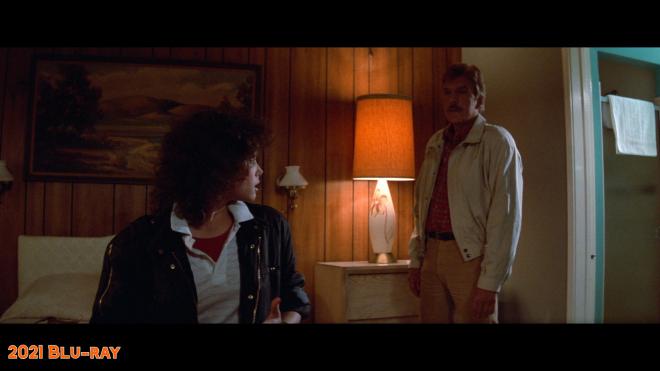 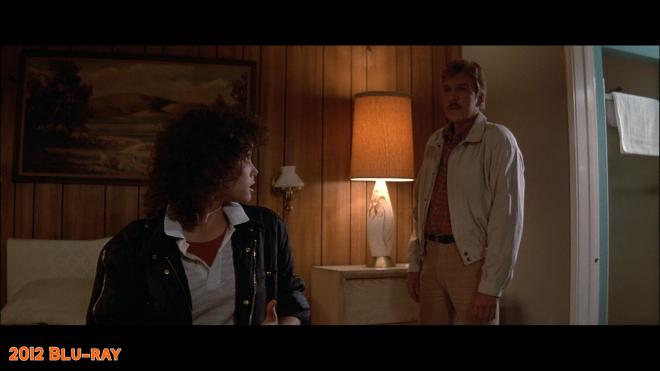 Again, Scream Factory is giving fans a choice of audio tracks. The original DTS-HD MA 2.0 mono mix - which is pretty good and gets the job done as well as a robust Dolby Atmos track. First up, this DTS-HD MA 2.0 mono track. This mix sounds virtually identical to the DTS-HD MA 2.0 track from 2012. Which isn't bad at all. It was a decent enough mix for the time and was true to the film. I did a lot of disc flipping through to listen for any differences and I just couldn't detect anything specific enough to put a stamp on it.

Now, while I’ll say the Atmos mix may not be the most engaging track ever made - there are some long stretches where sides and rears aren’t really all that active - it is my preferred way to watch this film. The biggest thing I noticed with the opening credits is how the John Carpenter score is now spread out throughout the channels and hits the subs much harder for better bass response. The opening rain storm offers more height, the climax in the factory gives those little falling medallions more presence and the finale offers up a stronger blend of dialog against the deep bass pulsing of the Silver Shamrock song. Sides and rears really only offer some extra mood and atmospheric effects than pinpoint on-screen object sounds and often feel silent, but during key moments they come to life to give this movie a little more presence and strength when and where it counts most. 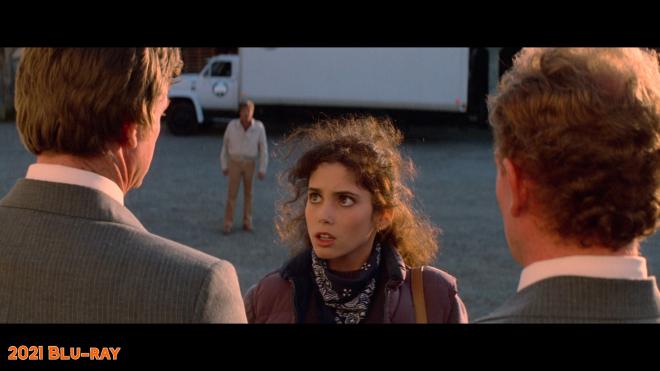 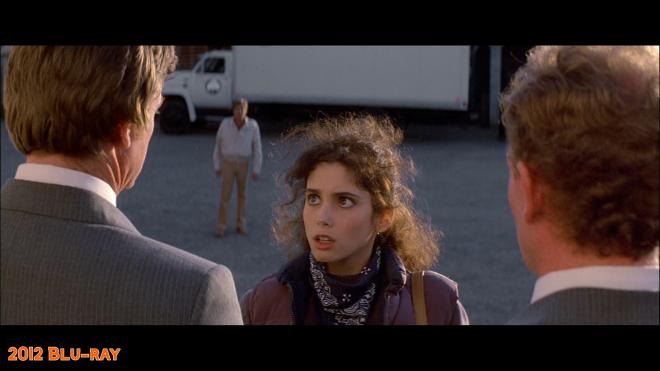 Good news for fans of the film, it doesn’t look like any bonus features are missing from past releases. The two audio commentaries are always a strong highlight so if you haven’t heard them before definitely give them a listen. Apparently new to this set - or at least I’ve never come across it - is a cool Make-up featurette with Tom Burman that’s well worth checking out. 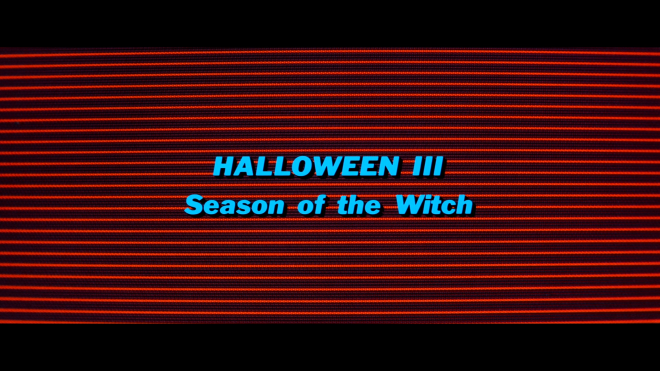 Halloween III: Season of the Witch may be a franchise outlier, but it’s still a solid film. It’s one of those cases where there just wasn’t a good decision one way or another. You either invalidate the ending of your last installment, or you strike out in a different direction. With a better marketing campaign, this new direction could have worked, but audiences expecting that pasty Captain Kirk mask was left in the cold until Halloween IV brought back the living embodiment of pure mindless evil.

Scream Factory gives Halloween III: Season of the Witch a devilishly good first 4K Ultra HD Blu-ray release. The new 4K transfer is a night and day improvement over the past 2012 disc, the two audio options fit the film - especially the new Atmos track, and fans get the full package of bonus features. It may not be everyone’s favorite, but it’s a solid creeper classic for the spooky time of year. Recommended.