One of the most infamous of the original “Video Nasties,” The Toolbox Murders drills, chops, nails, and hammers its way onto 4K Ultra HD Blu-ray from Blue Underground. Starring Cameron Mitchell, Tim Donnelly, and Pamelyn Ferdin, the film gives genre aficionados plenty of gore with ample nudity. Those expecting a smart take on horror may not find what they’re after outside of some shocking final twists. Blue Underground once again sets the stage for an excellent year of 4K Ultra HD Blu-ray releases with another exceptional Dolby Vision HDR transfer, an engaging new atmos mix, and hours of new bonus features to pick through. If you’re a fan, this is a more than worthy upgrade. Recommended

“This modest exploitation offering has an interesting style. While not the type of material normally associated with the video nasties, Toolbox Murders possesses a kind of maliciousness, despondent and morose air commonly found in Italian thrillers, known as Giallo -- a subgenre of the exploitation universe. It's a methodical, stylish, and very cinematic display of murder sequences set within some bizarrely dramatic plotlines. And Donnelly's Toolbox revels in this. Not only are the death scenes funnily exaggerated (neighbors are welcomed to walk right in and stare at the butchered victims), but it actually tries to tell a truly weird and freakish story to explain the mayhem. If for nothing else, the movie is an interesting attempt to create the American Giallo. 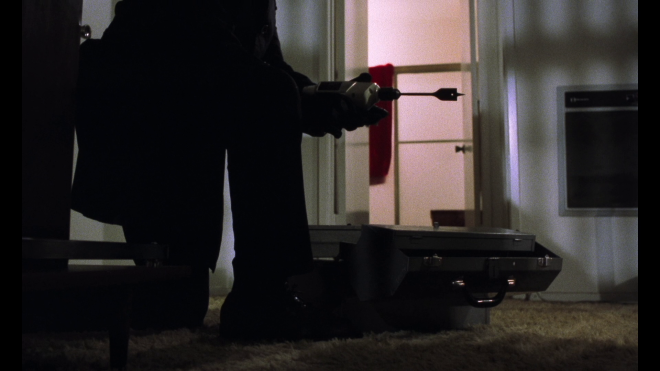 For about the first half-hour of the movie, an unknown assailant wearing a ski mask goes on a brutal killing spree at a small apartment complex in Los Angeles. The influences are made fairly clear with a killer slowly wielding his instruments of death so that they shimmer and glisten in the light before being drenched in blood. At one point, he even holds an electric drill in front of the camera to build suspense, which is nicely done. Unfortunately, things grow a bit stale going into the third act when the entire film becomes a kidnap/captivity/torture scenario. While at once creepy and disturbing, the story's edgy beginning simply isn't well supported or complemented by these events. The sudden and abrupt ending only compounds matters and leaves even the most hardened horror fanatic feeling somewhat short-changed.”

For myself, I feel pretty much the same with what E. shared in his review. The Toolbox Murders was the Video Nasty you heard about growing up but never actually saw - because it was so damn hard to locate. My local mom and pop rental shops never had a copy. So by the time I got around to it, it was one of those legendary titles that couldn’t live up to the reputation I’d built in my head. The first half is pretty gnarly and fun with our ski-masked killer dispatching attractive relatively unclothed coeds with wanton abandon. But then about halfway through the film decides it should have a plot - or at least attempt one. For a film that shares so many similarities to Fulci’s New York Ripper, it doesn’t know what to do with itself. So when our killer is unmasked and their intentions are known, it’s a big left turn plot change that’ll either hook you in or expel you from the rest of the flick.

So far as the cast goes, it’s pretty solid for a low-budget bloodfest. Pamelyn Ferdin does a fine job as the kidnapped woman in peril. Wesley Eure is solid and brings in some great character turns while Nicolas Beauvy lives up to the part of the dedicated brother trying to find his sister. For Mystery Science Theater 3000 fans you get two series heavy hitters. First, there’s Space Mutiny and Stranded in Space star Cameron Mitchell who appears to be having a great time hamming it up earning every penny of that paycheck. Then as our dedicated detective, we have Parts: The Clonus Horror star Tim Donnelly who must have been doing his director brother Dennis a favor lending his Emergency! star power to this film. 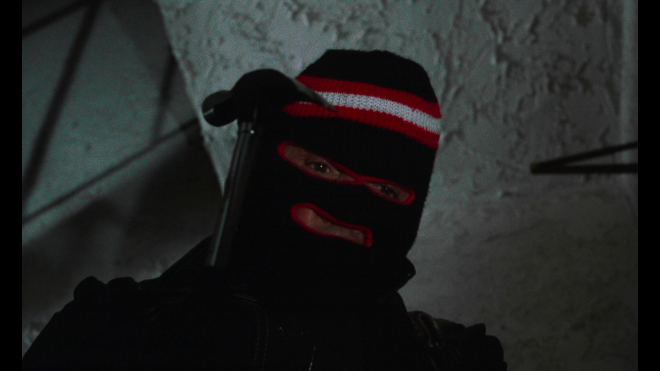 For a film of such notoriety, newcomers probably won’t be all that impressed with what The Toolbox Murders brings to the screen. Even with ample bloodletting, it’s an odd duck movie. For me, the thing that saves it is that twist ending. It’s definitely more weighty and thematically interesting than anything else in the film after a soft second act so admittedly it feels out of place. But I give credit to Dennis Donnelly and his writers for coming up with a genuine shocker for a finale. Not one of my favorites, but it’s a gory fun flick to revisit every once in a while.

Vital Disc Stats: The 4K Ultra HD Blu-ray
The Toolbox Murders comes home to 4K Ultra HD Blu-ray in a new 2-disc set from Blue Underground. The 4K disc is pressed on a BD-66 disc with the 1080p version and the bulk of the bonus features get a BD-50 disc. Both discs are housed in a sturdy Black case with identical slipcover with raised textures on the front image and spine. The discs load to animated main menus with traditional navigation options.

NOTE: All images for this review were sourced from the included 1080p disc - as soon as we can we'll swap out for 4K sourced images and if we can add a video clip... if we can find a scene that's actually appropriate for our channel. 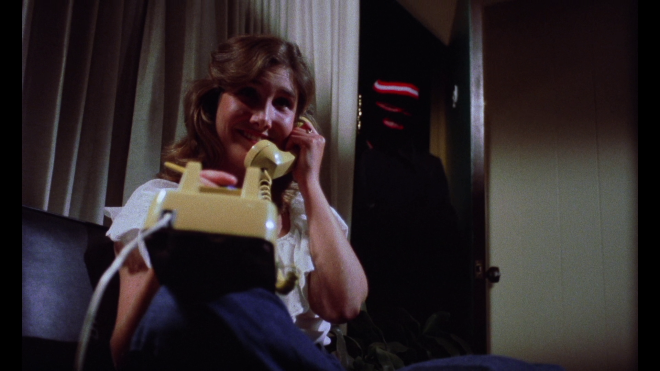 After a decent but underwhelming release in 2010, Blue Underground returns to The Tool Box Murders newly scanned in 4K from the original uncut negative for another incredible deep catalog Ultra HD release. The label routinely sets the high bar for the format and this is no exception. The Dolby Vision HDR (and HDR10) transfer is magnificent… well at least such as can be for a gnarly little low-budget gem like this.

From the start, details are sharper and clearer than ever before with a healthy organic film grain presence. My worry for these films is that the restoration effort may somehow make them look too “clean” but Blue Underground’s team always manages to make things look sharp and clear without betraying the film’s gritty grimy nature. Facial features, the 70s decor, and clothing, the nasty gore effects - everything is appreciable.

The Dolby Vision HDR pass is also right on point. Colors are appropriately clean and clear giving primaries - especially reds -plenty of pop. Past releases always struggled with muddy shadows and black levels and that isn’t an issue here. There’s plenty of shadow separation so that when our black-clad masked killer stalks around the darkness it doesn’t drift into crush, nor is it too bright and “gray” instead of true black. Flesh tones, and there’s an ample amount of that to observe, are healthy and natural. The elements are in terrific shape without any serious or notable age-related wear and tear to report. As a whole - another excellent turn from a label that knows how to treat their catalog. 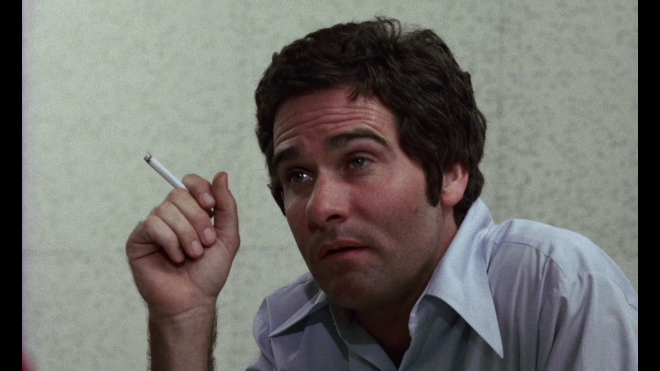 The Toolbox Murders picks up a trio of audio tracks to work with - a new Dolby Atmos mix, a DTS-HD MA 5.1 mix, and a DTS-HD MA Mono track. As has been the case with past Blue Underground releases, the Atmos track is pretty impressive filling out the soundscape nicely - however some of the films inherently muddy dialog never really quite comes to life. But then the dialog never really has sounded that great so it’s a cooked-in issue. The settings and locations don’t really call for a lot of distinct surround activity but there are some clever uses of the extra channels to give some pinpoint usage - but mostly the channels lend to the atmosphere of the film. Next in line is the DTS-HD MA 5.1 which again is pretty decent and like the Atmos mix offers some element spacing but not quite as impressive. After that, we come to the DTS-HD MA 1.0 Mono track - which is actually my favorite track of the disc. Even expanded for Atmos or 5.1, the film has a pretty narrow soundscape and this mix just feels and sounds more organic. Truthfully you can’t go wrong with any one of these tracks so it’s the dealer’s choice. My personal preference is the Mono mix. 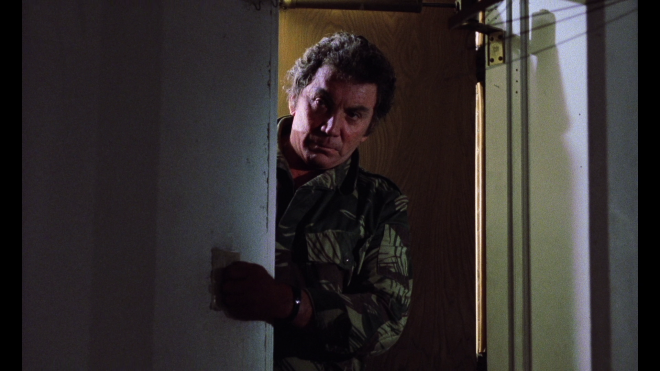 Not to leave anything in the box, Blue Underground pulls out a terrific collection of new bonus features combined with their old archival materials. Leading the charge, the new audio commentary track with Troy Howarth and Nathaniel Thompson is great and another worthy listen. On top of that, you get new interviews with Dennis Donnelly, Wesley Eure, Kelly Nichols, with David Del Valle turning in a nice remembrance for the iconic actor Cameron Mitchell. You have several hours of materials here and all are worth digging into. 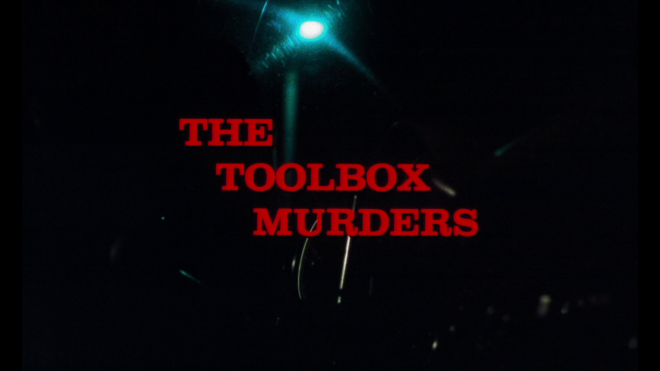 The Toolbox Murders is entertaining enough for horror hounds, it certainly has plenty of blood and guts and ample exposure to live up to its exploitation cult classic status. I personally wouldn’t call it a “great” movie - but there are far worse movies you can burn 90-minutes with. This one is at least inventive with a couple of solid performances to appreciate.
Blue Underground once again does right by their catalog upgrading The Toolbox Murders with a fitting 4K Ultra HD Blu-ray release. Sourced from a new scan - this 4K Dolby Vision transfer is excellent giving cleaner details than ever before with bold colors while retaining the film’s natural grimy low-budget charm. The new Atmos audio mix is pretty good, but I side with the mono track as the way to run. Throw in hours of new and archival bonus features including new interviews and commentary tracks and you have a great release on your hands. If you’re a fan of The Toolbox Murders this is an easy upgrade to call Recommended