Lucio Fulci puts the "psycho" in "psycho-sexual-thriller" with 1982's The New York Ripper out now on 4K Ultra HD Blu-ray from Blue Underground. The film is a bizarre horrifying combination of shocking grindhouse horror and comic relief that may test the limits - and patience - of the audience's thirst for hyper-graphic violence. It every bit lives up to its reputation and then some. Blue Underground adds another masterful restoration to their list of accomplishments giving this film a gorgeous native 4K transfer with Dolby Vision HDR and Atmos audio that retains all of the raw grit and grime this movie requires while giving it the best home video presentation it's ever had. Throw in a terrific set of bonus features and this giallo treasure earns respectable space in your splatter horror collection. Highly Recommended

There is a killer on the loose in New York City. That's not so strange - it's New York, and homicide detective Lt. Fred Williams (Jack Hedley) has become inured to the carnage he sees day in and day out. But this killer shakes him. Someone is stalking and violently slashing and dismembering attractive young women. Knives, broken bottles - any sharp edge can become a weapon of choice. As the body count grows, the killer brazenly leaves taunting phone messages to Williams while quacking like a duck! In order to stop this fowl madman, Williams must enlist the help of psychotherapy professor Dr. Paul Davis (Paolo Malco) to help narrow the search. 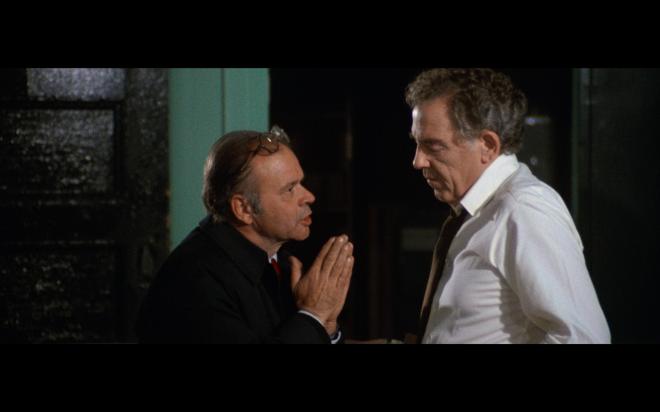 In the long, long ago days of VHS tapes, I went on a kick where I would rent random movies that came out the year I was born in 1982. A local video store offered 6 for $5 5-night rentals for "classics" making that job very easy. While my parents were celebrating an anniversary abroad, I spent a week of summer vacation making near-daily trips to recycle a selection of movies I'd never seen and I grilled virtually all of my meals. It was a hell of a week. I saw some amazing films - but I made the mistake of trying to watch The Last House on the Left and The New York Ripper back to back. I'd never seen either of them and I truly struggled to finish Last House. Then comes The New York Ripper and I didn't know if I should be laughing at this quacking killer or horrified at a woman being slashed repeatedly in graphic detail. I just remember standing in front of my grill in a daze while I smoked some ribs feeling like I should have made a salad. Bloody meat just wasn't appetizing.

It took me a few years, but eventually, I did come back to New York Ripper and was finally able to fully appreciate it. Zombie is still my favorite Fulci movie with House by the Cemetery a close second - but in terms of sheer unsettling brutality with this odd sense of humor - New York Ripper is a contender. I love how deceptively comical it can be. The opening of the movie perfectly sets this playful tone:

The first time I saw this scene, I knew what was going to happen, I was just waiting for that dog to come back with a body part. Having seen Zombie for the first time a couple of days earlier, I thought I was going to get something similar where the horror and gore were more funny than scary. Then the first murder happens and this film takes on a disturbing edge that only escalates with every brutal killing. The movie then follows the standard, tried-and-true serial killer procedural where the killer continues unfettered while the cop investigating turns to academia to help solve the case. Throughout Fulci deftly peppers clues about who the killer could be with plenty of misdirection to keep the mystery alive right to the very end.

The big difference with The New York Ripper and other serial killer flicks is the brazen marriage of sexuality and murder. They're one and the same here and any character that offers any kind of outward sexual quality may as well have a target on their back. There's gratuitous nudity aplenty throughout - but nothing about it is titillating. Especially after Fulci is done reveling in a staged sex performance in a theater, the female performer is brutally assaulted and murdered with a broken bottle. You often need an iron constitution to make it through this movie - that scene in particular.

The New York Ripper isn't the first movie I think of when I need a Fulci fix. Often it's the last because it is just so unsettling the "entertainment value" just isn't there for me. That said, when I do sit down to this movie I appreciate Fulci's skills behind the camera to craft horror that is genuinely disturbing. So many giallo movies play up the carnage as a joke. You're just waiting for the blood to start flowing. That's true here - but often when the slashing starts you wish it would stop but it just keeps going. Not at all for the squeamish and certainly not for every horror fan out there, The New York Ripper can be a challenge - but one worth attempting if you're getting into Italian Horror and discovering what Lucio Fulci has to offer the world.

Not having seen The New York Ripper in some time I was amazed with this restoration. I passed on the 2019 Limited Edition as I already had Blue Underground's 2009 disc and didn't feel the want or need to upgrade. But damn, flipping between this new 4K UHD release, the included 2019 Blu-ray and my old disc from 2009 - it's amazing the clarity and condition this film is in.

For this review, I picked through the 2019 Blu-ray before jumping into the 4K disc so I'd be able to offer the best comparison possible. The incredible details of the 2019 disc gain a modest improvement. What you're going to see with this 2160p 2.39:1 transfer is a lot of simple refinements. Clothing, production design, all of the 80s New York locations come with an extra layer of refinement and clarity. Stray threads on clothing or textured patterns or the grime on the police station walls come through. This movie loves close-ups of faces - often zooming into the mouth or the eyes and those facial textures take on true life-like qualities. If you're making the jump from the 2009 disc to this one, that difference is incredibly obvious.

With Dolby Vision HDR in play, colors offer gorgeous primary saturation. Blues and yellows offer plenty of pop - but red is a dominant color (for obvious reasons) and the shading gradience between the bloody crimson and the bright piercing red lighting or the velvet chairs of the theater all come through. This is also a movie that loves to live in the shadows and the deep inky blacks provide terrific image depth while allowing the lighting extra nuance to the shading and lighting for our quacking-mad killer to hide.

Film grain is apparent throughout - as it has been for all of Blue Underground's recent Blu-ray and 4K releases. This is a good thing. While a notable presence, it's refined and never overly distracting giving the image a natural gritty film-like quality. The New York Ripper like Maniac is a slimy grimy movie and the clean clear restoration effort never pulls back from that aesthetic. This movie may look better than ever - but it's still a beautifully ugly beast.

The New York Ripper gets to quack things up with a brand new Dolby Atmos mix, in addition to an English DTS-HD MA 5.1 track, an English DTS-HD MA 1.0 mono mix, and an Italian DTS-HD 1.0 mono track. Again - as was the case with the 4K releases of Zombie and House by the Cemetery it's dealer's choice. All of these audio tracks are excellent. The traditional mono mix is first-class stuff and the 5.1 track nicely expands the offering. But watching through with the Atmos mix, I have to tip my hat in that direction.

While there may not be overly distinct object placement, the sides, rears, and height channels offer a terrific sense of atmosphere and directionality while the front/center channels carry the primary workload. When the killer is chasing a victim or pounces out of the shadows the sound effects travel about the channels in a nicely organic and shocking way. The Atmos mix - and likewise the 5.1 track - never feel overly processed like new sound effects were added or distorted to create a surround sound effect. Regardless of your setup, you're in good hands with any one of these audio mixes offering unique listening experiences.

As with any release from Blue Underground - they pulled out some great bonus features for the 2019 release that have been ported over here. The Troy Howarth audio commentary is an essential listen as he details so much about Fulci's career but also specific tidbits about the production and shooting of this film in New York. The cast and crew interviews are also great - especially any interviews with one of the victims in the movie as these women discuss working on the film, but also the grotesque way they were killed. Most of the interviews are in Italian with English subtitles. All of this content is great stuff so with the commentary and interviews you're looking at nearly four hours of great bonus features.

Lucio Fulci movies are an acquired taste. You're either down for his brand of splatter horror, or you're not. His films can be a hell of a fun time mixing comedy and graphic gore in equal measure. Even then - you get movies like The New York Ripper where the visceral on-screen sexualized violence can be too much - or - the quacking killer can spoil the mood. This one isn't my favorite of his films, it can be tough to get through, but I love the gritty grimy nature. Fulci didn't shrink back or pull any punches. Even when this film is at its darkest, there is an offbeat sense of humor to lighten the load.

Blue Underground continues their winning streak with 4K Ultra HD Blu-ray releases. While the restored release for 2019 is very good - they found room for notable improvement with a native 4K transfer with Dolby Vision HDR and a new Dolby Atmos audio mix with 5.1 and mono mixes also included. Top things off with hours of worthwhile bonus feature content and you have another impressive release to satisfy genre fans. Highly Recommended.