Blue Underground resurrects Lucio Fulci's iconic Zombie to 4K Ultra HD Blu-ray with stunning results. After already delivering one hell of a release in 2018, the new master is upgraded to a full native 4K transfer with Dolby Vision HDR and the results are often breathtaking along with a chillingly effective Dolby Atmos mix! Even if you already have the excellent 2018 release, you'll want to consider another run if you've upgraded your gear for 4K UHD Blu-ray! Very Highly Recommended. 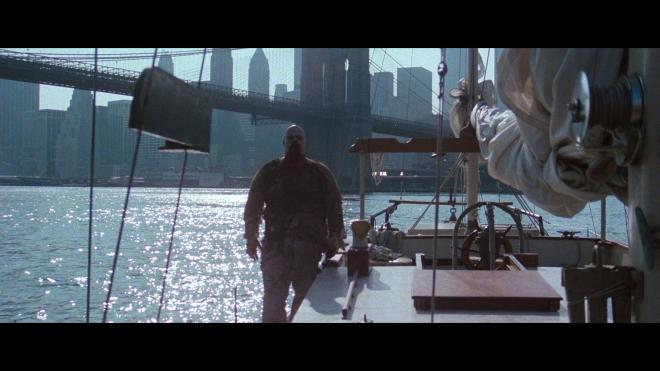 As I mentioned in that previous review - I love Zombie. That hasn't changed in the last two years and probably half a dozen viewings since I wrote that review. It's just a damned entertaining flick! If you love zombies, you're getting plenty of undead. If you love gore - well choose a scene and you're sure to experience and iconic moment. That eye-gouge and the guttural screaming still hits me every time I see it! On top of that, it's an Italian horror film so it knows when and where to dial things up to 11. Where else are you going to see a half-naked scuba diver fight a zombie underwater while also trying to escape from a shark?

From DVD to Laserdisc to Blu-ray to digital and now 4K UHD - I'm starting to amass quite the collection of Zombie. There's something about the bleak nihilism of this movie and the oddly timed but effective comedic elements that make me want to revisit it over and over again. That shark scene is impressive if you watch it and marvel at what it took to film a stuntman in full makeup fight a shark - but it's also completely ridiculous. It doesn't add anything to the plot. It's never mentioned once they get to the island. It could be cut from the movie entirely and the plot wouldn't suffer - but the overall entertainment value of the movie would lose a great cinematic moment. When movies can be holographically recreated or beamed directly into our brains - I'll still watch Zombie again and again.

Zombie gets another chance to infect your home video library from Blue Underground - this time as a two-disc 4K Ultra-HD Blu-ray + Blu-ray Bonus Disc set! This set does not include the film in 1080p. This release is strictly for people who can watch it in 4K. Both discs are housed in a sturdy black 2-disc UHD case with identical slipcover artwork. The disc loads to an animated main menu with traditional navigation options.

While I'd hoped that Zombie would reach 4K UHD - I didn't expect Blue Underground to execute this release so soon after their amazing 3-Disc Limited Edition and make yet another purchase of this film so completely worth it! This new  2020 release is arguably the best visual presentation of this film - and I honestly didn't think I would be saying that so enthusiastically.

The 2018 release was amazing. That new restoration made me feel like I was seeing things I'd never noticed before for the very first time. That same 4K restoration has been fully unleashed on UHD Blu-ray and with Dolby Vision HDR I'm once again feeling like I'm catching small details I'd never noticed. Some little, some blatantly obvious - but as a whole this was a highly satisfying upgrade! One of the first things that stood out for me was the New York City skyline cast in fog as the abandoned cruiser drifts into the harbor. Before that always looked like a simple gray silhouette but now I felt like I was seeing details in the buildings through that fog. Likewise little pieces in production detail - like in the news office there are signs for "No Smoking" and immediately underneath "No Dumping" I'd never caught before. Another more obvious detail was Brian's Daily Planet t-shirt. After dozens, if not a hundred viewings over the years - I don't know how I never noticed he was wearing a Daily Planet shirt - but this was the first time that little goofy nod struck me! While I wouldn't quite say this is the night and day detail improvement as I would say for the 2018 release over the 2011 disc, but here every frame gets a little extra detail refinement with a natural film grain presence for a richly film-like image.

With Dolby Vision HDR employed, colors, black levels, and bright whites all enjoy extra refinement. As the tone and the lighting of the movie gets darker and darker, the shading and shadow effects become much more nuanced. This is also true for the infamous underwater shark battle. Past presentations suffered from being overly bright, here the deeper Susan swims - the darker it gets with a more natural aquatic shift from shimmering blues to deep aqua-green.

It shouldn't be of any surprise that the gore effects get a little extra crimson punch here as well while other primaries pop off the screen. After that, the other appreciable enhancement is with the white blooms baked into the film. They've always been there for various scenes, but now there's some finesse and grading in the light. Throughout image depth is maintained offering a nicely three-dimensional presence to the image - that splinter of wood never looked better! If this is an indicator of what Blue Underground has in store for future 4K Ultra HD Blu-ray releases, genre fans have a lot to look forward to.

The audio for Zombie is another area where I would have been perfectly satisfied if Blue Underground had recycled the previous DTS-HD MA 7.1 and mono tracks. When it comes to Italian horror movies or westerns, I like them mono - as they were originally recorded. Previous surround mixes - while effective - I never felt really added anything to the show. I'm slightly changing my tune for this new Dolby Atmos audio mix. Whether you chose to stick to the original mono mix, the included DTS-HD MA 5.1 track or this new Atmos audio mix - you'll have a terrific experience, but each mix is rather unique to themselves.

The mono mix is obviously front-loaded and very blunt with restrained imaging. Which is fine - that's what an Italian mono track should sound like complete with awkwardly dubbed voiced and odd canned sound effects with an iconic score looming over everything.

This new Atmos mix manages to offer up some genuine channel separation for specific audio elements so that it doesn't just sound like a mono track stretched out - as I felt with the previous 7.1 mix and this new 5.1 track. Those other surround mixes are fine, they used your full sound system nicely - but again I didn't feel like it added anything to the show. This Atmos track allows for some distinct element separation with welcome imaging through the channels. It remains faithful to its mono roots with a lot of front/center dominate material, but now in the opening for example, when the helicopter passes the drifting cruiser it has a more defined upward presence or later in the film when the zombies lay siege to the hospital, distinct but natural sound effects have a more nuanced pinpoint presence than before.

This new Atmos mix doesn't sound like they added new effects unnecessarily - but simply slightly moved things around allowing for a nice sense of atmosphere and presence within the soundscape. I think I still prefer the mono track personally - that's just me - but those expecting an engaging and more immersive audio experience will find it here. I rate the included audio tracks as follows:
Mono - 5/5
DTS-HD MA 5.1 - 4/5
Dolby Atmos - 4.5/5

There aren't any new bonus features offered for this set, but between the actual 4K UHD Blu-ray and the standard bonus Blu-ray disc, you get a fantastic assortment of extra features to pick through. The audio commentary with Troy Howarth and the archival commentary with actor Ian McCulloch and Jason J. Slater are well worth the time.

Leave it to the niche studios like Blue Underground to show the big guys how to restore and release a catalog film on 4K Ultra HD Blu-ray with Zombie! Considering we're less than two full years between home video releases, I really didn't expect to be wowed by the native 4K transfer with Dolby Vision HDR. I figured it'd look good - but this is beyond my expectations. Likewise the new Atmos audio mix - considering the original mono source - I was very pleasantly surprised. Maybe not enough to call it my preferred track, I do love that mono mix, but it's impressive and much more effective and immersive than any previous surround track released. If that wasn't enough - all of the previously available archival bonus features are included! The only thing missing from the 3-Disc set from 2018 is the soundtrack CD. Again - this set doesn't include the film on 1080p Blu-ay so it's strictly for fans rocking 4K Ultra HD Blu-ray and to that end - Zombie is Highly Recommended.