The original Saw film made a permanent imprint on cinema and took the horror world by storm with its new likable villain in Jigsaw. this film, with its great twist ending, stylized edits, and a wonderful story went on to make seven sequels and a remake. Prior home-video releases of this film didn't bode so well with its video and audio presentations, but this new 4K transfer with Dolby Vision and HDR, along with a new Dolby Atmos track is nothing less than stunning. Previous commentary tracks, bonus features, and what looks to be a brand new hour-long extra are included here, making this HIGHLY RECOMMENDED!

One of the biggest horror franchises to ever splash onto the big screen was 2004's Saw, written and directed by newcomers James Wan (The Conjuring) and Leigh Whannell (The Invisible Man). This little horror film was made on a shoestring budget for only one million dollars. But with its excellent, dark, scary premise, and the ability to cast a couple of amazing actors (Cary Elwes and Danny Glover) amongst others, along with its fresh new, stylized edits and cuts that were hip at the time, and of course the decent amount of carnage and gore - this film went onto gross more than $100 million financially, which spawned seven sequels, a toy line, a comic book, and a reboot with Spiral. There's good reason for it too because nothing had been done quite like this before and the twist ending could make M. Knight Shymalan wish he had a hand in Saw. And still, almost twenty years later, this original first film stands the test of time as a smart, inventive, and highly entertaining horror flick. 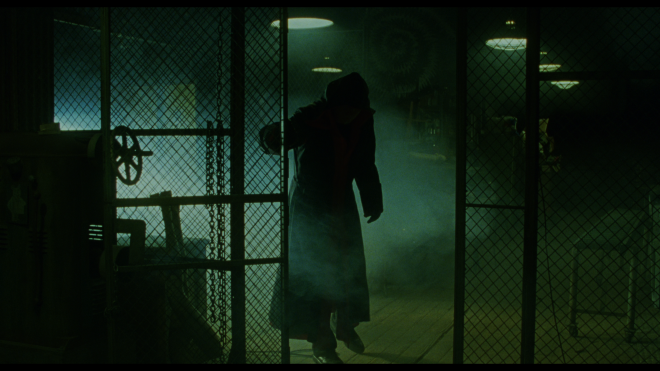 Getting personal for a moment, one of the best movie-going experiences for me was watching Saw opening night in the biggest theater that was completely sold out. The buzz was in the air and people were clamoring for a thrilling jolt to their horror roots. It was the best audience for the film as it was packed with cheers, applause, gross-out yells, and more. That is until the twist ending, where everyone but one sole survivor in the audience felt the need to stand up and walk slowly out of the theater when the big reveal was presented and yell "BOOOO" as he continued to walk out. The entire audience laughed out loud, but it didn't phase anyone, as each audience member was fascinated and in love with all that was Saw in the little moment in the midwest. It's one of those rare moments where an entire group of people, sans that one person collectively loved a horror movie and expressed it loudly. Let's hope that this sort of connection can happen again real soon in the real world once more.

The film opens up in a dirty, gross gigantic, industrial bathroom where two men Adam (Whannell) and Dr. Gordon (Elwes) are handcuffed to iron pipes in this room. In the middle of the room is a bloodied dead body with a recording device that says, "PLAY ME". Once the two men somehow get ahold of that device, there is a mysterious, scary voice that states it wants to play a game with them, stating they can save their own lives if they use the hand saws to cut themselves free. Meanwhile, on the outside, a few police detectives are finding elaborate "games" setups that kill individuals whether it be a barbwire maze or a metal contraption that will explode someone's head unless they unlock the mechanism within a certain time. 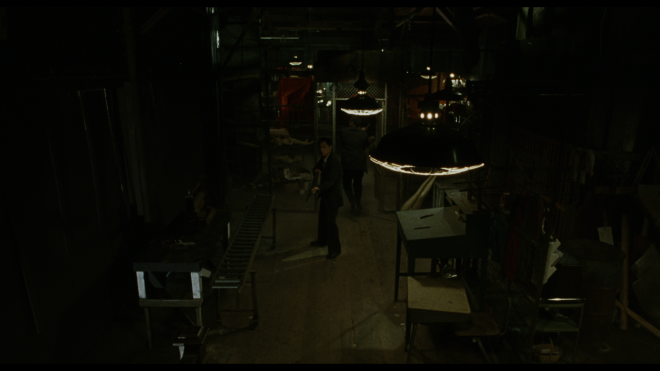 As clues are discovered, it's revealed that this mastermind serial killer has a precise motive and is not just targeting innocent people, but rather certain humans with an extremely checkered past, who he forces into a life or death physical challenge to "see the light" and error of their ways. The clock is ticking on these two characters as the detectives try to make heads or tails on who the killers are while discovering other grisly crimes across town. This all culminates in one of the best twist endings of all time and became the constant in this film franchise with its "Usual Suspects" finale moment.

Luckily, a lot of the film all takes place inside this disgusting bathroom, where Wan uses some impressive camera angles to keep things lively and full of terror, which he also enhances when inside the other sadistic game contraptions. Whannell and Wan also explore the noir genre with the detectives, taking cues from films like David Fincher's Se7en as the police try and solve the case. With some decent performances, specifically from Whannell and the excellent script he wrote that felt fresh for the early 2000s, Saw still remains one of the coolest and most fun horror films of the century, which inspired in a whole line of films from other filmmakers in this sub-genre of torture-horror movies.

After this first film, each movie was more or less the same pattern and twist, but with this original Saw, the mythology it built, and the characters it created were simply fantastic and again, changed the horror world forever. And it's quite telling that still to this present day, studios are still in business with Saw, which all started it out in a bathroom that nobody would want to occupy.

Vital Disc Stats: The 4K Ultra HD Blu-ray
Saw games its way to a brand new 4K UHD release from Lionsgate with a 4K Disc + Blu-ray Disc + Digital Copy of the film. The discs are housed in a hard, black plastic case with an insert for the digital copy. There is also a cardboard sleeve with artwork of a painted Jigsaw puppet. 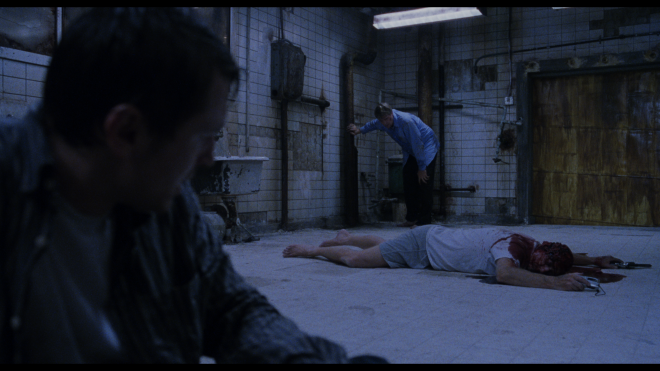 Saw comes with a brand new 2160p UHD transfer with Dolby Vision and is a huge leap forward from its previous releases. The past few Blu-rays and DVDs of this film in either of its sets or solo releases haven't exactly had the best video presentations, but Lionsgate has finally given their hit film the much-needed love and care it rightfully deserves with more vibrant colors and sharper detail.

Right from the very first scene, there's a huge difference with the grimy and dirty white tiled bathroom walls with a faint blue and purplish glow to them. Dr. Gordon's blue shirt now contrasts perfectly with the background and his facial wounds have a better shade of red and purple. The bloody corpse on the floor looks amazing as well with some deep red tissue and brings scattered about. Each color is more vibrant than the last here and each tile on the floor is distinguishable this time around, where nothing bleeds over. The flashback sequences of the torturous games have a great green tint that is brighter and brings a bit more life to the carnage. The Dolby Vision really enhances these nuanced colors of rust on the metal contraptions and barbwire in the different lighting conditions, as it does with the many uses of blue in the wardrobe. It's more natural and realistic this time around. Back levels are now deep and inky with zero crush or murky shadows and the skin tones are in their proper shade

The detail is more vivid as well, revealing more individual stubble hairs on the actor's faces, bloody practical effects that reveal veins, muscle, and brains, and better textures in the costumes, such as the grotesque rubbery pig mask that now shows all the detailed rubber and lines that went into making it. Wider shots of the city and of the bathroom look sharper and not as soft as in past releases. This really is a great new video presentation with virtually no video issues to speak of. 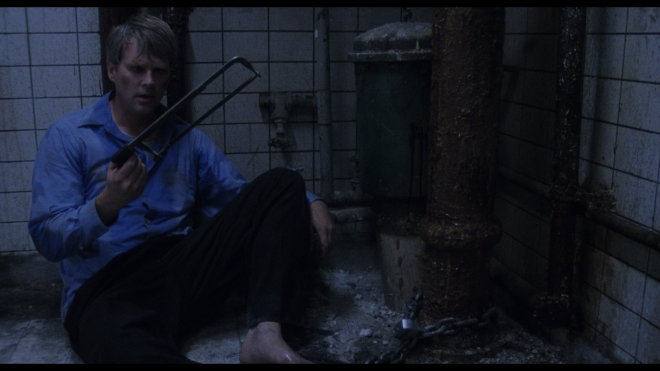 This release has finally come with a Dolby Atmos track that sounds remarkable. The film is mostly dialogue-driven, but it's the small atmospheric sounds in the bathroom, the Jigsaw games, and when the detectives are hot on the pursuit is where this Atmos track truly shines. It's a fully immersive experience with the little sounds of glass breaking, pipes squeaking, and metal-on-metal scraping sounds that truly make this track amazing again. Gunshots are explosive, providing a loud bang with a surprisingly good low end of bass that has a nice rumble to it, never crossing into rocky territory.

The screams from the many people in the film never sound like they're in a tin can, but rather have some heft to them now. Overhead speakers bring well-balanced pipe drips and falling debris from buildings quite nicely, along with faint screams heard from other rooms. The score always adds to that noir and horror factor, which really kicks in with its famous title track as the big reveal this the screen. Dialogue is always clear and easy to follow with zero audio problems. 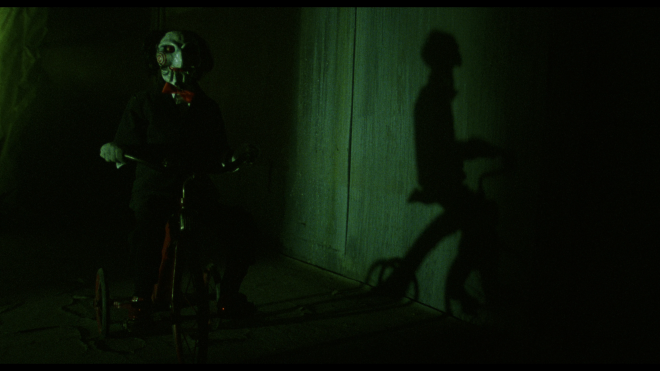 There are 109 minutes of bonus material, one of which seems to be brand new with cast and crew interviews talking about the production, characters, and revisiting the film after all these years. There are also two commentary tracks from previous releases that have been imported over. The commentary tracks and the new hour-long bonus feature are located on the 4K Disc, while everything else, including the commentary tracks and new extras, are on the Blu-ray as well. 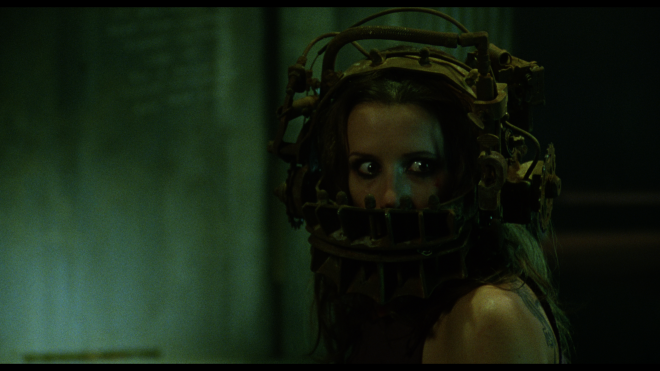 Saw in 4K is pitch-perfect once again as Jigsaw stakes his claim on the horror realm forever. The brand new UHD transfer with Dolby Vision is insanely good, while the Dolby Atmos track adds some much-needed nuanced noises to make it a fully immersive movie-watching experience. There are a ton of excellent bonus features, one of which is brand new that is worth the time. HIGHLY RECOMMENDED!