Leigh Whannell's psychological thriller The Invisible Man is a modernized retelling of H.G. Wells's 1897 sci-fi classic, a parable for the #MeToo movement featuring a remarkably powerful performance by Elisabeth Moss. The sci-fi horror materializes on 4K Ultra HD with an outstanding Dolby Vision HDR and Dolby Atmos presentation, but a small set of bonuses. Still, the overall UHD package is Highly Recommended for horror lovers everywhere.

The mind behind horror franchises Saw and Insidious, Leigh Whannell injects new life into H.G. Wells's The Invisible Man by modernizing the 1897 sci-fi classic for contemporary audiences. Taking up both writing and directing duties, he reimagines the tale of a scientist who turns invisible as a psychological thriller and parable for the #MeToo movement. Whereas Wells cautioned the hubris of human aspiration and the dangers of unchecked ethical restraint in scientific progress, Whannell's take is a cautionary tale of narcissism devolving into unwanted obsession, intimidating surveillance and the post-traumatic effects of sexual violence. Granted, the plot's themes artlessly brought to the forefront and made transparent leaves very little room for a more artfully crafted film, but what Whannell ultimately delivers is nonetheless an entertainingly engaging and satisfying thriller.

From the same filmmaker who surprised horror fans with 2018's Upgrade, Whannell manages some genuine creeps in this new paranoid retelling. He draws our attention to the victim unlike Wells's original novel focusing on the moral descent of the gifted research scientist Griffin — renamed Adrian Griffin, played with creepy effectiveness by Oliver Jackson-Cohen. His story has been told plenty and is familiar enough to serve as stereotypically satisfying a boy's sexual fantasies. But here, this is her story. It's about Cecilia (Elisabeth Moss) falling prey to a man's over-inflated and rather psychotic ego. This is a tale spotlighting the psychological aftermath of abuse and how that abuse loiters in the mind like some imaginary, invisible presence constantly watching, making it difficult for others to see or understand, as with Cee's sister (Harriet Dyer) and friends (Aldis Hodge & Storm Reid). 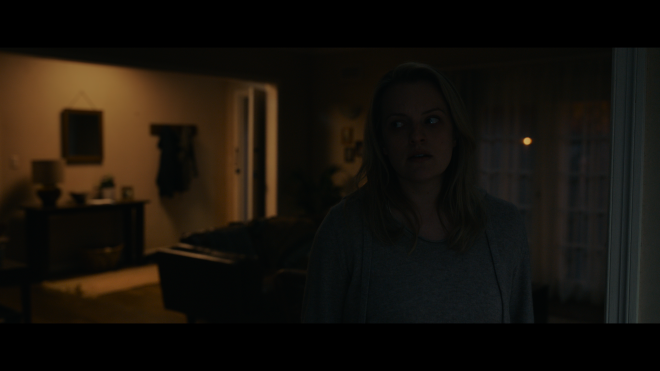 In that, Whannell displays some fascinatingly creative choices in his camerawork that are worth noting and admiring. Working with cinematographer Stefan Duscio (Sweetheart), Whannell deliberately and consciously ensures the camera doesn't come across as an unsolicited gaze or feel as though encroaching in her space. One such way the filmmakers demonstrate this happens in the opening moments as Cee attempts to quietly creep out Adrian's minimalist yet oppressive house, and while she dresses into more comfortable clothing, the camera looks away to empty hallway. Later, they repeat the same camera movement while Cee hangs clothing on a rack to simply show empty space, effectively establishing an eerie feeling of someone watching just before Cee also feels it. The movie displays other highly-stylized choices cleverly generating an atmosphere of paranoia.

By its very nature, the horror genre has historically and characteristically been sociopolitical, informed and even to some large extent driven by the cultural anxieties of the period in which the fictional story was produced. Stories of terror are ripe metaphors and allegories for societal fears. They naturally carry the potential to encapsulate the terrifying experiences of a few and extend those experiences to a larger audience, and Whanell's The Invisible Man undoubtedly participates in that long tradition, ingeniously modernizing a classic story for a topical and still contentious conversation. My only complaint is really the lack of subtlety and nuance when expressing those very serious themes. Of course, none of this — which are really just my own personal gripes — in no way take away from an otherwise spine-tingling thriller and Moss's remarkable performance sucking audiences in for every frightful turn.

Universal Studios Home Entertainment brings The Invisible Man (2020) to 4K Ultra HD as a two-disc combo pack with a flyer for a Digital Copy, which can be redeemed via sonypictures.com and Movies Anywhere, granting users access to the 4K Dolby Vision HDR version, some with Dolby Atmos audio while others in Dolby Digital 5.1 Plus. Inside a black, eco-elite case with a glossy slipcover, a triple-layered UHD100 disc sits comfortably opposite a Region Free, BD50 disc. At startup, viewers go straight to a menu screen with full-motion clips, music playing and interactive options along the right side.

The sci-fi horror thriller materializes on Ultra HD with a gorgeous and stellar HEVC H.265 encode that delivers a strong upgrade over its day-and-date Blu-ray peer. Shot entirely on the Arri Alexa camera system at 4.5K resolution, the native 4K transfer creeps around with appreciably sharper definition throughout. We can better make out the threading in Adrian's suit and its tiny unique features, and the smallest object decorating his meticulously minimalist home is plain to see in the background. The individual hairs in the fabric of clothing and in the cast are discrete, the fine lines in the woodwork of the Lanier home are distinct, and facial complexions are incredibly revealing, exposing the most negligible blemish and imperfection.

In fact, when comparing the two households, we can really see where this Dolby Vision HDR presentation surpasses its HD SDR counterpart. The Lanier home is more welcoming, bathed in a fuller, warmer arrangement of sepia tans, marigold oranges, caramel browns and light amber hues. Mixed into all that, we also see livelier emerald greens and more animated, deeper reds. On the other hand, Adrian's home is flooded in steely, cold blues and teals that not only create a moody, creepy atmosphere but also add an oppressive feel that seems to follow Cee everywhere she goes. Meanwhile, flesh tones appear more lifelike and accurately rendered, showing a rosier glow in the entire cast.

Throughout, the 2160p video also flaunts a crisper, more vivid contrast balance, outfitting the terror and thrills with resplendently intense whites and excellent clarity into the far distance, which is greatly appreciated in some of the camerawork that tends look off into seemingly empty spaces. Likewise, specular highlights supply a welcomed improvement with a better, tighter glow in the hottest spots while maintaining excellent detailing and giving metallic surfaces a realistic polish. Moreover, brightness levels shower the action in richer blacks, providing the 2.39:1 image with an attractive cinematic quality. However, as is sometimes the case when making the jump to UHD, much of the photography is noticeably darker than the HD version, occasionally making visibility of the finer details within the darkest corners a bit challenging. Still, the shadows have an inky, velvety quality to them and don't completely ruin or take away from the film's overall enjoyment. (Dolby Vision Video Rating: 90/100)

It is worth noting that this UHD edition of The Invisible Man also features the HDR10+ video format. However, as of this writing, we are not yet equipped to evaluate the quality of the said format.

The reimagined chiller creeps into home theaters with a terrifyingly awesome Dolby Atmos soundtrack sure to deliver the spine-tingling goods.

Granted, the musical score does much of the leg work utilizing the entire system for generating an ominous and foreboding atmosphere, exhibiting outstanding definition and separation within the midrange. But other subtle effects also partake in the moody fun by employing the surrounds at various times, such as the sound of rain pouring directly above the listening area, the occasional bird chirping in the distance, the loud crash of waves echoing overhead or the chatter of restaurant patrons spreading through the sides and rears. There is one moment, however, that stands out as an odd missed-opportunity for effectively using the top heights, which is the scene when Cee calls Adrian's phone and the ringing supposedly comes from the attic space above but nothing is heard. Admittedly, that's just personal and very minor quibble, but I still think it worth mentioning.

On the flip side, the sound design packs an unexpectedly impressive and robust low-end, delivering a shockingly powerful presence that digs deep and hard during several choice moments, adding a surprisingly suspenseful air of apprehension. Amid the action and scares, vocals are always prioritized and distinct with appreciable intonation in the performances, making for a great, frightfully hemispheric listen. (Dolby Atmos Audio Rating: 94/100)

The same set of supplements is shared between both formats.

The Invisible Man is a modernized retelling of H.G. Wells's 1897 sci-fi classic from horror filmmaker and director of the unexpectedly good Upgrade, Leigh Whannell. Featuring a remarkably powerful performance by Elisabeth Moss, the film is a genuinely creepy psychological thriller and parable for the #MeToo movement. The sci-fi horror thriller materializes on Ultra HD with an outstanding 4K Dolby Vision HDR presentation, providing a welcomed upgrade over its Blu-ray counterpart, and a terrifyingly awesome Dolby Atmos soundtrack. Although the assortment of bonuses is on the light side, the overall UHD package is highly recommended for horror lovers everywhere.