Nobody is a sibling to the John Wick universe that stars Saul Goodman himself Bob Odenkirk who after his family is victim to a home invasion, he reconfigures his past as an assassin and sets out on a violent journey to kill every last one of the bad guys. It's a ton of fun. This release comes with amazing video and audio presentations that included Dolby Vision and Dolby Atmos, along with some great bonus features. Highly Recommended!

Read our original Theatrical Review of Nobody 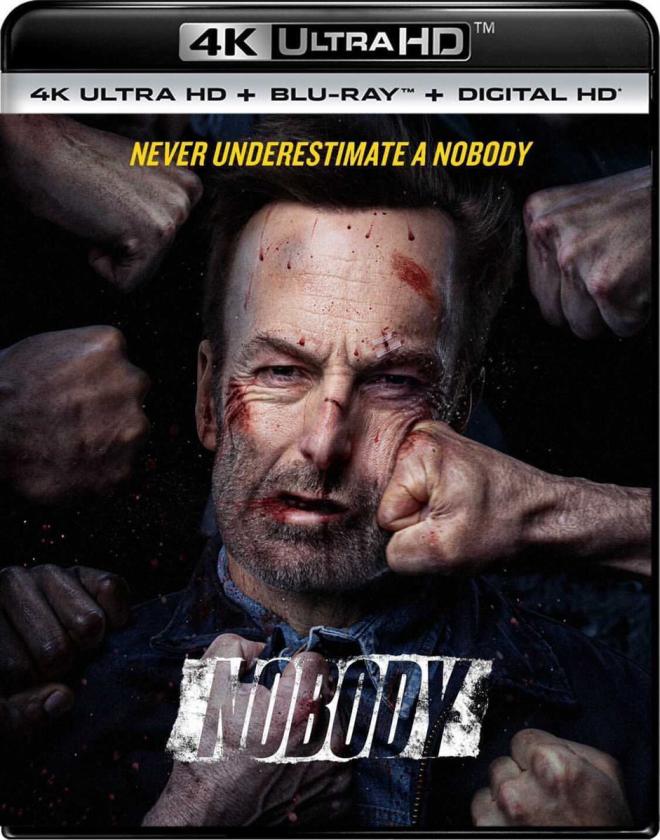 Bob Odenkirk hangs up his briefcase and mighty pen of the law offices of Saul Goodman and turns it all in for guns, knives, explosives, and hand-to-hand combat in Nobody, which is a less serious sibling to the John Wick universe. It's a fun ride, even though a lot of the elements have been seen very recently before on the big screen, but the cast led by Odenkirk is top-notch and delivers fantastic performances along with an impressive climactic fight scene that guarantees audible cheers. Nobody is a good start to another fun action franchise, despite some small issues.

Nobody is helmed by Ilya Naishuller (Hardcore Henry), who is no stranger to action films, and written by Derek Kolstad, who wrote all three John Wick films, which is blatantly evident in almost every sequence in this movie, although there is no mention of Wick or that specific universe here. Nobody centers on Hutch Hansell (Odenkirk), an average-joe family man, who is quiet, does his repetitive job at his wife Becca's (Connie Nielsen) family's company, and comes home and is almost non-existent to the point where he is too timid to speak to his kids or even have a fruitful relationship with his beautiful wife. He even misses trash day consistently every week and will do anything to avoid confrontation and conflict with anyone.

One night, a group of masked thugs breaks into his house to rob it and end up getting in a scuffle with his teenage son Blake. Hutch has an angle on these robbers where he can easily take them out with a weapon, but he chooses not to do anything, which results in his wife and son being extremely disappointed in him where their relationship deteriorates fast, as he becomes a metaphorical punching bag and the laughing stock of the family - even more so than he was. Hutch then transforms into his true self, a former hardcore killing machine assassin, trained by an elite force of the government, who has kept his real identity hidden from his family as he tracks the thugs that broke into his house and stole some heirlooms.

By chance on a bus, he gets in a huge fight with a Russian gang and completely obliterates all of them, but he gets more than he bargained for when they are connected to a giant Russian mafia. This sets in motion all the henchmen coming after this seemingly gentle and dorky middle-aged man to meet their extremely violent end. Of course, he has help on his side with two phenomenal and exciting performances by Christopher Lloyd and RZA.

As Nobody plays out, it's very easy to see and count the many similarities to John Wick, from the backstory to character arcs, to even a small pet friend the main character takes a liking to. This all being said, it's different enough to keep its core alive and entertaining from start to finish, even if the film has a relatively slow start in setting up characters that are so familiar. But once the action hits the ground floor, it keeps blasting at full speed and doesn't really stop, culminating in an applause-worthy action-packed finale full of bloody carnage and gun-fu, made famous by John Wick, but with an added Home Alone element of a place being rigged with deadly traps.

Naishuller knows explicitly how to shoot an action sequence, but never uses his full ability into the final act, making for some interesting and odd edits up until the climax, by using quick cuts and never allowing the entire sequence to play out in full and see the full damage - that is until the end, which again is something special. Odenkirk plays it straight and narrow here but turns on the violent rage when he needs to and it's completely believable. None of this slimy charm from Saul Goodman is evident or on display in Nobody. RZA is a fantastic addition to this universe and film and Christopher Lloyd out of nowhere deserves his own film because he definitely steals the show.

Nobody walks the same line as John Wick does, but doesn't really live up to that franchise, at least with this first film in telling small bits of this elite assassin universe or even with its action until the final battle scene. That being said, there is still much to explore with these characters and settings, which may or may not tie into a John Wick world at some point in time. Nobody is a perfectly fun and lively action film that brings some hard-hitting punches that will knock anyone's teeth out.

Vital Disc Stats: The Ultra HD Blu-ray
Nobody executes its way to 4K UHD + Blu-ray + Digital Copy from Universal. The two discs are packed inside a hard, black plastic case with a cardboard sleeve. The artwork features the artwork of Odenkirk. There is an insert for a digital copy inside, along with member points for Universal. 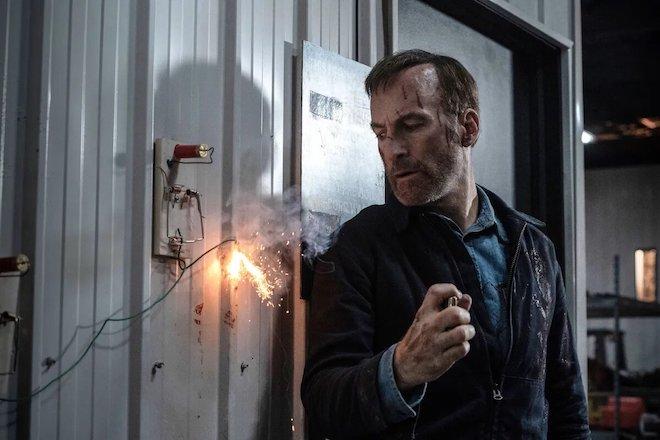 Nobody comes with a fantastic-looking 2160p UHD transfer with Dolby Vision and HDR10 that looks better than its 1080p Blu-ray counterpart. The detail and colors are improved here, making for a visually wonderful action movie.

The colors are bolder and richer in each lighting condition. From the dark home interior during the break-in which has elements of blues and silvers lighting the way to the bus fight sequence where dirty white colors and browns and primaries seem to pop nicely. The club scenes showcase some bright neon lights and the warehouse reveals some muted industrial colors of greens and oranges. The Dolby Vision elevates these colors into a brighter territory, along with allowing the black levels to be deeper in the low lit scenes. The basement room where all the records and whisky are stacked, looks amazing with its '70s style color palette with all nuanced colors coming across well balanced. Skin tones are also natural throughout.

The detail is very sharp and vivid with excellent closeups that reveal practical makeup effects of wounds, gunshots, and mangled flesh. individual hairs, wrinkles, age lines all look great here in all lighting conditions. The textures in clothing all reveal the fine stitching as do all the shades and metallic-like weapons that are rampant throughout. With this 4K presentation, there is a more filmic look to the movie, making every sequence have more depth and crisper. There were no big issues with banding, aliasing, or video noise to speak of. 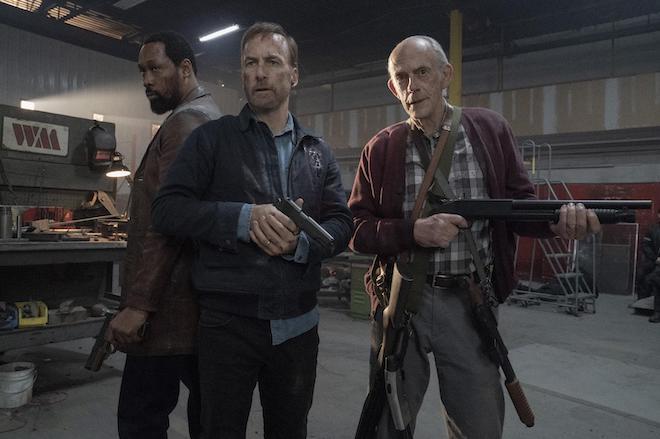 This release comes with an impressive action-packed Dolby Atmos mix and is a ton of fun. This is one of those action films where the volume is turned up on every sound effect to make it ooze that much more and create a more powerful impact. Every gunshot, punch to the flesh, and bone crack is robust and allows for a ton of low-end bass that drives each violent act home and back again. Each gunshot sounds different depending on the weapon and all have a phenomenal rumble to them. The vehicle engines roar nicely as well.

The ambient noises of background gunfire, people dancing at a club, and even the screams of those poor victims that meet their fate at the hands of Odenkirk can be heard in the surround speakers. The height element brings the volume up with explosions, gun blasts from above, and more. The score is energetic and adds to the chaos of the film. The dialogue is crystal clear and clean, free of any audio problems. 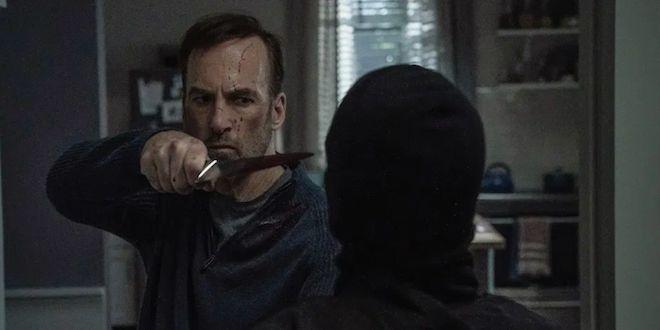 There are about 40 minutes of bonus material here, including deleted scenes, behind-the-scenes, and cast and crew interviews. There are also two different audio commentaries with the director and Odenkirk. 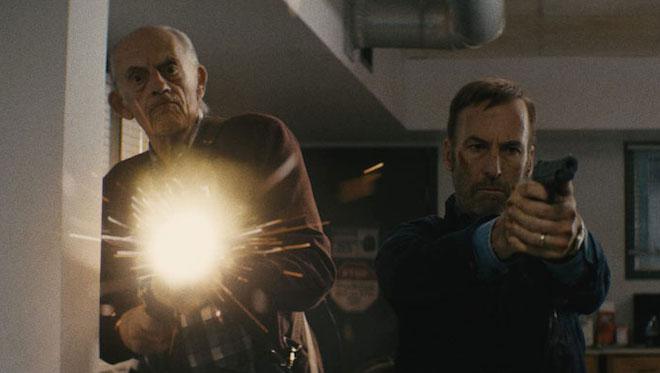 Nobody is a super-fun and action-packed film with some great performances, surprises, that feels like a dark comedic sibling to the John Wick universe. Odenkirk is fantastic. This 4K release looks and sounds amazing with its 2160p UHD transfer with Dolby Vision, along with its impressive Dolby Atmos track. The bonus features are worth watching as well. Highly Recommended!