The painful and hilarious holiday classic Home Alone gouges fans in the eyes with a brand new 4K Ultra HD Blu-ay release with HDR10. You've seen the movie a hundred times, but now thanks to the new transfer, you'll see new details, and the judicious HDR grading highlights the film's already beautiful color pallet. Without a new audio mix or any new bonus features, fans have to ask if the improved video quality is worth the purchase - again - of this holiday comedy. Recommended.

Two working-class guys are just trying to earn a little extra scratch for the holidays. At the end of their ropes, Harry (Joe Pesci) and Marv (Daniel Stern) have turned to burglarize the rich homes of a Chicago suburb while families are away on their Christmas holiday vacations to get by. They thought they had it made until they targeted the wrong home - the McCallister's. Harry and Marv soon learn why Kate (Catherine O'Hara) and her husband Peter (John Heard) "accidentally" left their demon child Kevin (Macaulay Culkin) home while they skipped off to Paris. From the moment Harry and Marv first attempt to enter the house and plunder the riches, they'll be subjected to a painful fiery hell at the hands of a tiny psychopath where they'll be lucky to survive until Christmas morning. 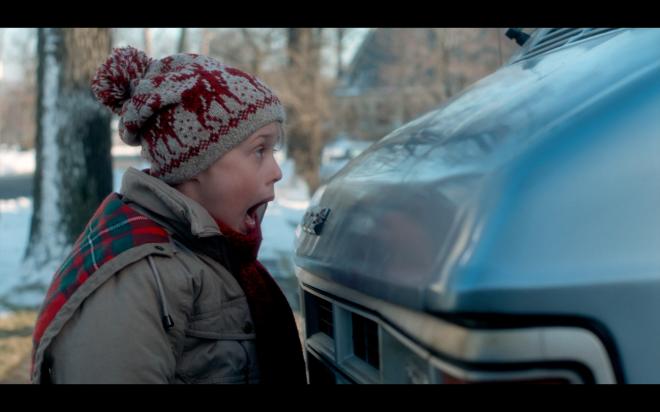 As I wrote for the Ultimate Collector's Edition set in 2015, there's not a whole lot to say about this movie that hasn't already been said. You're either a fan - or you're not. For some, the nostalgia of sitting in the theater watching a small kid take down grownups with a variety of diabolical traps is well worth revisiting. I love how the film has grown into this meme of equating little Kevin to Rambo setting traps and picking off the bad guys one-by-one. Years ago I made a mashup trailer where I turned him into the killer from Red Dragon - but the Rambo meme is just as funny. Hell, I love the videos that try to scientifically prove all the ways Harry and Marv would have actually died from any of the injuries they sustained in this movie let alone the sequel.

30 years later, Home Alone is still a fun show. As a new father, it's wild to realize I was 8 years old when my parents took me to see this at the theater over Thanksgiving - and then for the next several weekends after. We certainly did our part to contribute to the film's massive domestic box office haul. And then as soon as it hit VHS I forced my parents to pre-order a copy so I could pick it up from the mall video store and watch it a dozen more times when and where I wanted. I'm waiting for the day that I get tired of ever seeing this movie again. I'm sure that day will come when my son discovers it and watches to watch it every day all day. Until then, it's a nice little piece of childhood nostalgia to pull out during the holidays.

Given that I usually wait to watch this one until closer to Christmas, I was surprised at how easily I got caught up in this little adventure again - even in full sunny 70-degree weather. Sure, some of the gags haven't aged well in three decades, but that's more due to familiarity at this point than any actual problem with the movie itself. Home Alone 2 certainly isn't a fresh film since it's a beat-for-beat rehash of this one, but the pair make for a welcome double feature every winter. Don't try to overthink it - just kick back and have fun.

Home Alone makes its 4K UHD Blu-ray debut thanks to Disney and their retitled 20th Century Studios brand in a 2-disc 4K UHD + Blu-ray + Digital set. My digital slip was blank, no code was printed on it - so that could be a thing or just my dumb luck. The 4K disc loads to Disney's usual structured Language sub-menu and then lets you proceed right to the movie or to a static image main menu. None of the bonus features are on the 4K disc so the only reason to visit the main menu at all is to turn on subtitles if you need to. While the image printed on the standard Blu-ray is different, the disc itself is identical to the 2015 remastered disc.

Home Alone lands on 4K UHD Blu-ray with a pleasing 2160p/HEVC H.265 HDR10 1.85:1 transfer. Right away the color benefit of the HDR10 pass is apparent. That blue house graphic already picks up significant pop. While initially soft on fine details due to the credits, the image immediately takes on a warmer tone and feel when we enter the family home. The original Blu-ray and previous home video releases were always nice and bright and colorful, but now there's a feeling of warmth to the colors that are befitting of a holiday movie. Skin tones are healthy and reds, blues, and yellows have a lovely pop. Christmas lights throughout the movie offer a nice glint to the lighting.

Details don't gain a substantial improvement from 1080p to 2160p, but for close-ups, middle shots, and sequences with any heavy patterns there's a notable uptick in clarity. I felt the things that stood out the most were patterns in clothing or the wallpaper throughout the McCallister house took on a little extra refinement. The next benefit came for the makeup effects of Harry and Marv's painful torture. The iron outline in Marv's face or the burn makeup on Harry's head looked cleaner and more painful than ever. Throughout the image maintains a healthy and natural film grain presence for a nice film-like presentation.

There are some soft moments that still pop up from time to time, and any time there's an optical effect on screen the image doesn't pop details. But Black levels and whites are spot on with a nice deep inky presence while whites are bold without any unintentional blooming. The only distracting anomaly I encountered was some banding around Catherine O'Hara's fine houndstooth patterned coat in the beginning. Other than that everything looks pretty damn good offering a notable overall visual improvement over the previous Blu-ray release. I do hope Home Alone 2 makes it to 4K UHD soon as that one could use the restoration.

Instead of opting for a new Atmos or DTS:X mix, Disney was content to recycle the same decent and effective DTS-HD MA 5.1 audio mix from the previous Blu-ray release. This track still holds up nicely with clear dialogue, nice sound effects, and good imaging. Some decent LFE pumps come through from any impacts or the gunfire from the gangster movie. Not a bad mix at all and if you pop on DTS Neural:X the mix takes on a little extra punch.

No new bonus features were created for this release, and what's here - none of them are on the 4K disc. Not even the audio commentary.

Home Alone is a nostalgic holiday classic. It's become a generational favorite as the kids that first saw this movie in theaters now have kids and are introducing it to their brood. With the fun mix of child-focused comedy hijinks and the playful game performances from participants like Joe Pesci and Daniel Stern make this movie. Every kid wanted to be left home alone after this movie - at least I did - because who wouldn't want to have the run of the house and do whatever they wanted? As Home Alone celebrates its 30th Anniversary, it's now getting a grand upgrade to 4K UHD Blu-ray from Disney. The new transfer offers a notable improvement over previous releases, but without a new audio mix or any new bonus features, it may be a tough sell for those who already have bought this title countless times over the decades. However, if you're itching for a new 4K disc this holiday season, you should be happy with the results. Recommended.