J.J. Abram's Super 8 remains a terrifically entertaining homage to 80s cinematic tropes with a heartwarming tale of coping with grief and loss. Celebrating its 10th Anniversary, the sci-fi adventure lands on 4K Ultra HD with a strong Dolby Vision HDR presentation, the same demo-worthy Dolby TrueHD mix and the same set of supplements as before. Nevertheless, the UHD edition makes for a decently Recommended upgrade for loyal fans.

Would it be fair to summarize J.J. Abrams's Super 8 as "The Goonies meets E.T."? The high-concept plot about a small band of teen misfits encountering a misunderstood extra-terrestrial certainly feels that way every single time I watch it. Oozing in 80s cinematic nostalgia, the sci-fi adventure is ultimately a blatant love letter to all things Steven Spielberg, which only further adds to it being perfectly encapsulated in that simple sentence. In fact, if we're being completely honest, everything about the production feels Spielbergian while practically nothing feels like Abrams's unique directorial voice, none of which is intended to knock down the movie. Its genuine love and homage to that radical film decade are amazingly a massive part of its charm, and the tropes never feel like pandering to a nostalgic audience, as he later would do when frustratingly feeding to fanservice in The Rise of Skywalker.

Instead, the era just serves as a simple, coincidental backdrop to the more important thematic elements about grief and coping with loss, and this is at the core of the film's true success. The one feature, in my estimation, that perfectly captures the Spielbergian feel is the kids, their camaraderie and the strong bonds holding them together, especially when their broken families fail them, as in the case of Joel (Joel Courtney) and Alice (Elle Fanning). Beyond all the nostalgia, the heart of what makes Abrams's film work is the kids coming together to solve a mystery larger than themselves, which obviously has to do with a giant alien running amok in the town of Lillian, Ohio, but that also serves as a bigger, metaphorical purpose. For some, that moment of realization can come off rather maudlin and schmaltzy, but it fits with the story as it's meant to and is perfectly in line with the film's larger Spielbergian feel. 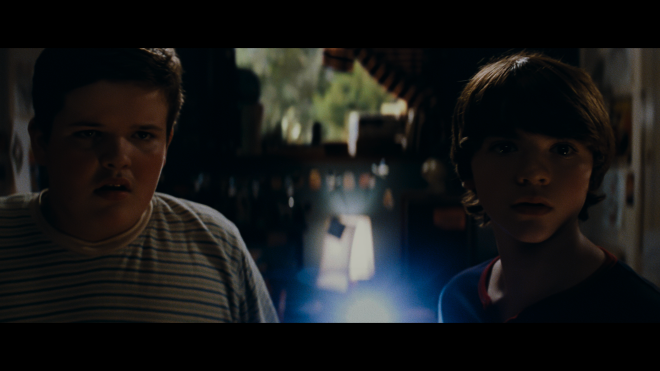 For a more in-depth take on the movie, check out our review of the 2011 Blu-ray HERE.

Paramount Home Entertainment celebrates the 10th Anniversary of J.J. Abrams's Super 8 as a single-disc Ultra HD edition with a flyer for a Digital Copy, which can be redeemed via ParamountMovies.com, giving owners access to a 4K UHD copy with Dolby Vision HDR and Dolby Digital Plus 5.1 audio. The dual-layered, Region-Free BD66 disc is housed inside a black, eco-vortex case with glossy slipcover. At startup, viewers are taken to a screen with full-motion clips, the usual selection along the bottom and music playing in the background.

Nostalgia oozes all over this Ultra HD edition outfitted with a beautiful yet mildly disappointing HEVC H.265 encode, which was reportedly struck from a brand-new 4K remaster. The movie was originally shot on a combination of Super8, Super16 and 35mm mixed with a few digital sequences on the Red One camera system, and the difference between those sources is naturally a bit more apparent here than on the Blu-ray with Charles' zombie movie being the most obvious. More importantly, the native 4K transfer, on the whole, doesn't really offer the sort of night-and-day difference expected in terms of overall definition and clarity. Compared to its HD predecessor, there is an appreciable but still minor uptick with clean, well-defined lines and objects in the background. However, there are several moments that are noticeably softer and blurrier than others, most notably the extreme wide shots and the CG visuals, and there is also a smidge of wavering along the sharpest edges of buildings.

Of more interest is the slight improvement in contrast and brightness balance, particularly with the 2160p picture looking perceptibly darker than the 1080p version. To its benefit, black levels enjoy a nice boost that's consistent throughout, providing the 2.40:1 image with good dimensionality and a cinematic appeal. Visibility within the darkest corners and shadows is mostly strong, but a few moments, such as when characters are running though the alien's subterranean maze, can be somewhat challenging to make out. Daylight sequences offer the best moments and may appear brighter overall with a more energetic pop in the whites, but ultimately, the difference is not by a significant margin. Likewise, specular highlights remain comparably similar even though the hottest spots are marginally tighter and crisper with a whit better detailing, such as in the light fixtures, the bright flashes of light and in explosions.

The best feature of this Dolby Vision HDR presentation easily goes to the small improvement in the colors, furnishing the visuals with a rejuvenated pep and vigor. Most notably, the orange-teal palette in Larry Fong's cinematography is more apparent with blues showing a wider range, from the soft cerulean skies and the sapphire arctic shades of the lens flares to the dark navy and indigo of the clothing and in the nighttime sequences. Moreover, yellows glow with a more dynamic and livelier enthusiasm while browns and tans appear fuller and show better variation, making for a warmer and more welcoming presentation overall. Reds and greens are more nuanced and subtle but nonetheless appear a tad more spirited while facial complexions look more natural with good lifelike textures. A few sequences can seem a hair over-saturated, such as an early dinner scene at the Kaznyk house, but in the end, the 4K video makes for a strong upgrade over its HD SDR counterpart. (Dolby Vision Video Rating: 74/100) 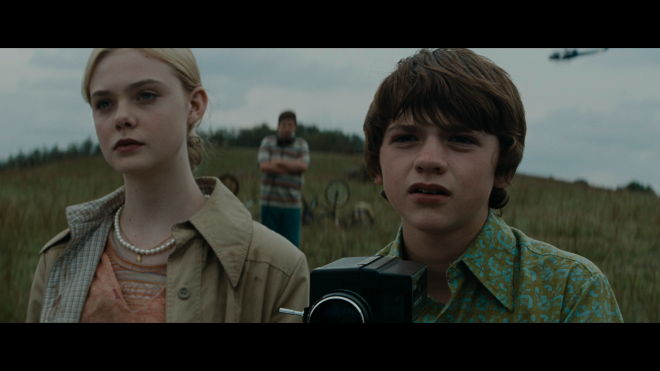 For this UHD edition, the sci-fi drama invades home theaters with the same spectacularly awesome Dolby TrueHD 7.1 soundtrack as the previous Blu-ray release.

Admittedly, an Atmos option would have added some tremendous value to the visuals, but to be fair, this lossless mix nonetheless remains reference-quality audio sure to test anyone's system. The lossless mix is littered with lots of background activity nicely balanced across the entire soundstage while exhibiting a superbly clean and extensive mid-range. Even during the loudest, action-packed segments, such as the notoriously ear-piercing train crash, the various frequencies maintain amazing detailed clarity with precise, well-prioritized vocals. As would be expected, the low-end is incredibly powerful with exceptional response, supplying the action with wall-rattling intensity and a potent, palpable presence. The design also does splendidly well when applying the receivers' Dolby Surround or DTS: Neural:X up-mixing functionality, effortlessly enhancing the various atmospherics from the surrounds into the overheads while wonderfully expanding the song selection and score to all the speakers, creating a mint, highly-engaging soundfield. (Audio Rating: 96/100) 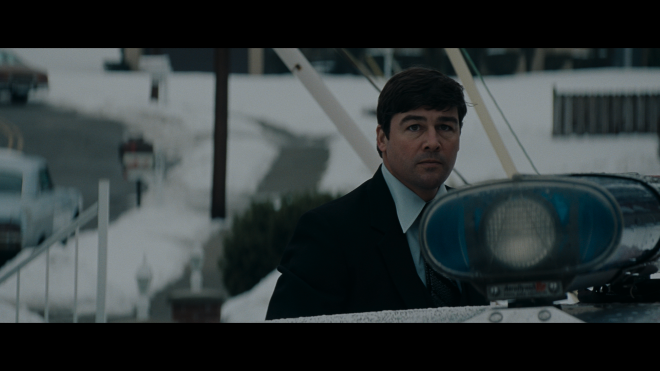 The film celebrates its 10th Anniversary with the same set of bonuses as the previous Blu-ray. 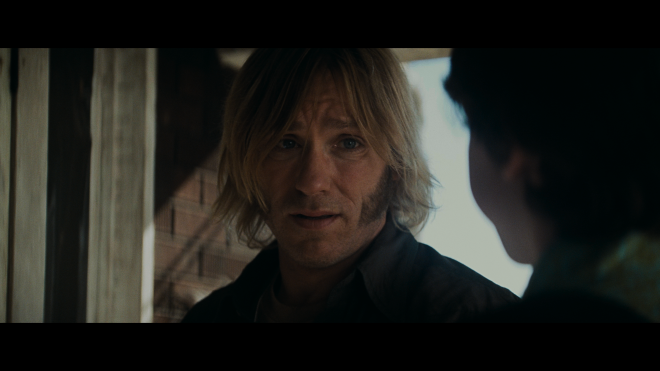 Taking inspiration from a variety of 80s cinematic tropes, J.J. Abram's Super 8 remains a terrifically entertaining sci-fi adventure that also feels like an homage to the monster disaster movies of the 50s and 60s. And what ultimately makes the film work a decade later is a heartwarming tale of friends coping with grief and loss when family fails. Paramount Home Entertainment celebrates the film's 10th Anniversary on 4K Ultra HD with a strong Dolby Vision HDR presentation that offers an appreciable yet minor uptick over it Blu-ray predecessor. The same, demo-worthy Dolby TrueHD mix and the same set of supplements as before are also ported over for this UHD edition, and in the end, the overall package still makes for a recommended, if also somewhat reluctantly, upgrade.