Richard Donner working from a screenplay by Christopher Columbus from an idea by Stephen Spielberg - The Goonies celebrates it's 35th Anniversary with a fresh new 4K restoration from Warner Brothers. This 80s kids adventure classic brings fun and imagination to a big show with a cast of colorful characters, memorable quotes, and one of the meanest ladies this side of a Rocky and Bullwinkle cartoon. With a beautiful new 4K transfer with HDR10, a new DTS-HD MA 5.1 mix that's pretty good, and the same set of previous bonus features, this may not be the biggest or best way to celebrate 35 years of the Truffle Shuffle - but it's certainly better than previous releases. Recommended

Without any shame or hesitation, I admit I am a big fan of The Goonies. It's a movie I still enjoy as an adult, admittedly in part from nostalgia, but I also love the craft that went into making this show. I was a kid of the 80s. I was three years old when my parents took me and my older sister to the theater to see it. The legend goes I completely lost my shit when the kids find Chester Copperpot's crushed corpse. While I don't remember that moment in my life specifically - I do remember having my parents zip past that scene every time we watched our tape my Dad recorded off a rental because skeletons freaked me out. I grew up watching this movie. Living out in the woods on a nice parcel of land, it was an adventure that spurred a lot of fun times tearing things up in the swamps and poison ivy with my friends on our own adventures. 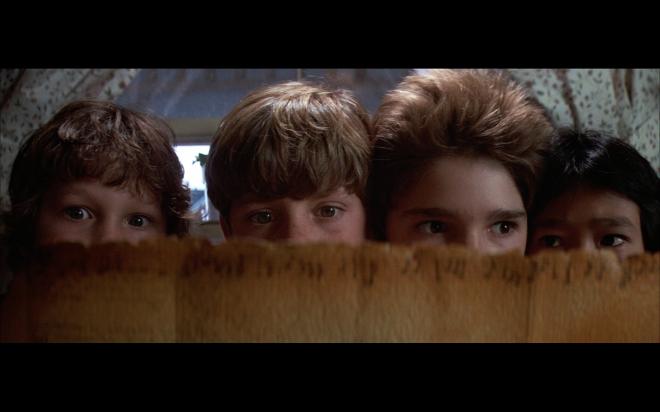 As an adult, I'm not blind to the movie's flaws; there are quite a few that stand out. The evil land developer somehow demolishing an entire neighborhood of houses that appear to rest on some seriously steep hills to… build a golf course? This was an 80s trope that got recycled a lot but this one is a doozy, removing 40-50 homes and then spending the next several years grading the land all for a private country club with limited membership options? There are a few other nitpicks but going out of your way to knock The Goonies is a waste of time. It's just being cynical for the sake of cynicism and who needs that in their lives? Kick back and enjoy the thing because you're supposed to be having fun.

Children in a reasonable amount of peril seem to be one of Steven Spielberg's knacks for storytelling. Somehow the kids always come out on top, but there's an edge to the danger in this movie that is a bit unsettling. Especially as it blends in comedy. Sure a Rube Goldberg machine about to drop 1-ton boulders is bad, but three adults threatening to put a kid's hand in a blender? It's still messed up but then it's also damn funny. This scene only works because of Chunk's hilarious confession - "When I was in the fifth grade I pushed my sister Edie down the stairs, and I blamed it on the dog!" That line cracks me up every time.

Where I love this movie today is it highlights the primary creative contributor's best aspects. Richard Donner was at his peak action-movie directing in the 80s and here he keeps the energy up while building on each Rube Goldberg set piece; the film is constantly moving. The opening credits is one of my favorite sequences as it not only introduces Anne Ramsey's Fratelli family but as they lead the police on a high-speed car chase it introduces each of the main characters and what they bring to the movie. Christopher Columbus' kid-friendly-but-fun-for-adults hijinks that would serve him well for Home Alone. Steven Spielberg's knack for conceiving a great idea for a movie but leaving it to other filmmakers to do the job better is on display plus add in Michael Kahn's editing and Dave Grusin's excellent score and you have a great adventure flick.

There seems to be this odd growing consensus that you had to be a kid the first time you saw it order to enjoy The Goonies as an adult. Again, I'm willing to admit my nostalgic tendencies for this movie, but I also reassert that people just don't need to be so cynical about it. How many kids movies are made that adults enjoy over the years but aren't subjected to that level of cynicism? It's a fun movie. It's not perfect - but it doesn't have to be perfect to be entertaining. Sit back and enjoy it.

The Goonies finds gold on 4K Ultra HD Blu-ray courtesy of Warner Brothers in a two-disc 4K UHD + Blu-ray + Digital set. The discs are housed in an eco-friendly two-disc black case with identical slipcover artwork. The included Blu-ray is identical to the 2010 release and has not been upgraded in any way. The 4K disc loads to a static image main menu with traditional navigation options.

Scoring a fresh new native 4K 2160p 2.40:1 transfer with HDR10 - The Goonies looks better than it ever has on home video. There are still some flaws here and there, the droll color pallet doesn't really leap to life and baked in softness is an ever-present companion, but those are small gripes when considering all things going well for this release.

The 2010 Blu-ray wasn't the best example of what 1080p could offer fan-favorite movies. Sure, it was better than the DVD, but then not by much. It was successfully mediocre. Now, this new transfer isn't going to make you see this movie in a whole new light - but the added detail resolution, natural grain appearance, and color grading certainly go a long way marking up several noteworthy improvements. Facial features, costuming, and the film's impressive production design above and below ground look great.

As a very dark movie - black levels and shadows are the biggest improvements here. When you have scenes lit by an orange lantern, there's more image depth and the glowing light's shadows fall in line giving shading highlights to objects and the cast. Whites that could appear hot or bloom are not much more under control, those overcast skies actually show some cloud details. Flesh tones appear more natural while primaries pick up some extra punch without changing the intended scheme. Some special effects still stick out - bats on wires are a notable example and the final animated pirate ship is a sore thumb compared to the rest of the film. Again - those are largely cooked-in issues that couldn't be fixed without some serious revisionism. All in all, I'm very happy with this new transfer. It's not the prettiest coin in the 4k chest, but it offers welcome improvements over previous home video releases.

In 2010 The Goonies enjoyed a "meh" Dolby TrueHD 5.1 mix on Blu-ray. This 4K disc gives The Goonies a new DTS-HD MA 5.1 mix that is only slightly less "meh" without knocking up many notable improvements. The only thing I felt more was a little extra lower tone and LFE on occasion - when the boulders fall is one point. Doing some disc flipping I felt like there was some ever so slight improvement in the atmosphere - when the boys are in the attic and there's a low rumbling thunderstorm; that whole sequence felt a little more open. Dialog clarity offers another little bit of improvement, but again not leaps and bounds. Dave Grusin's score is still great stuff and when the action comes in there's some great surround activity. All in all, this is a good track but it only offers very slight improvements that aren't always easy to identify over the previous mix. Enabling DTS Neural: X does help add some punch to the track so if you have that function give it a whirl.

The 4K disc doesn't have any bonus features on it - not even the Audio Commentary with Richard Donner and the cast. All of those bonus features are the same slim slate from the original 2010 release - with many already ported over from the 2001 DVD. The commentary is great if you haven't heard it and the deleted scenes fill a few gaps - why were the piano notes partially burned for the bone piano scene or the infamous octopus fight that was wisely cut from the film. It'd been cool to catch up with the cast and crew again - especially as Richard Donner keeps teasing a Goonies II that will probably never see the light of day.

The Goonies is an old favorite. It's a fun childhood adventure movie back in the day when kids could actually ride their bikes for miles, stir up some mischief and still be back home in time for dinner. Sure, not a perfect movie but it doesn't try to be - nor should you expect it to be to have fun. It's a genuine 80s kids classic adults can still enjoy. Long overdue for a proper restoration, Warner Brothers delivers The Goonies to 4K Ultra HD Blu-ray with an excellent native 4K transfer with HDR10, a new and only slightly improved DTS-HD MA 5.1 mix, and sadly the same stale bonus features. I felt the transfer alone was worth the upgrade, but the lack of new bonus features or a full Atmos/ DTS:X mix may be a sticking point for some. Recommended.