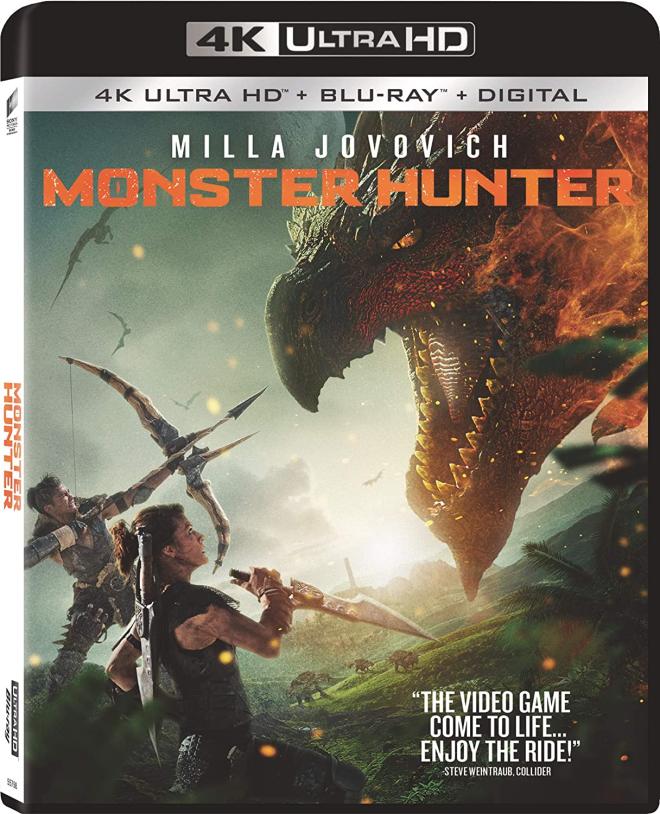 Confessing to actually having fun sitting through the preposterously bonkers mayhem that is Monster Hunter honestly feels a little dirty and even ickier when also admitting to wanting a sequel for this otherwise monstrous mess. And frankly, isn't that at the heart of Paul W.S. Anderson's rather mediocre success. Aside from cult favorites Event Horizon and Soldier, his movies are the furthest from anything that would arguably qualify as good filmmaking. Yet he seems to possess this dumfounding knack of churning out surprisingly entertaining shlock. Then again, a year of theater closures and a limited selection of new releases, which itself consists mostly of a mixed bag of average productions, might be heavily clouding my judgment. In any case, this fantasy-action nonsense based on the video games of the same name delivers just the right mix of rowdy, silly visuals with B-quality escapism to be good, mindless, popcorn fun.

And the silliness kicks off immediately, right from the start with a thunderously loud opening sequence of a pirate ship sailing across a tempestuous ocean of . . . sand? Sailing the high seas of . . . a barren desert? And the ship is captained by Ron Perlman, who looks like the forgotten love child of the Feral Kid from Mad Max 2 and Cha-Ka from the Land of the Lost TV series. The absurdity continues when audiences are then transported to another desert scene with an Army squad in search of another missing squad, and they're captained by Milla Jovovich. Seeing Jovovich as the fittingly named Artemis is not the silly part because she actually does believably well as the hardened, damaged soldier with a past. The silliness comes from the eye-rolling, laughable dialogue of the soldiers regurgitating various stereotypical military jargon that Anderson obviously echoes from other movies.

Unfortunately, much of the movie feels like it was cobbled together from several, better-made action-adventure flicks, or to put it more mildly and politely, Anderson is humbly borrowing from them. Transported by a massive electrical storm to this so-called "New World," Jovovich's Artemis eventually finds herself alone after her squad was attacked by gigantic arachnid versions of the bloodthirsty bioraptors from Pitch Black. To demonstrate this soldier's toughness, Jovovich suddenly goes full-on Rambo III when cauterizing a wound with gunpowder. Later, she makes friends with the local welcoming committee of one, a skilled monster-hunting warrior aptly named Hunter (an awesome Tony Jaa). And at some point in his life, he must have watched Ridley Scott's Gladiator because he sure seems a devoted fan carting around ivory figurines of a wife and child while praying by candlelight.

To be fair, there are some mild hints in Monster Hunter of self-awareness, of the filmmakers knowingly embracing the silly concept and running with it, like Artemis doing the tough one-liner before entering into battle and suddenly realizing Hunter doesn't speak English. In fact, their partnership is perhaps the plot's strongest feature, making it a tolerable watch and the heart beating at the center of the visual absurdity. Despite their language barriers and while Jovovich's character essentially plays the "white savior" trope, their friendship blossoms slowly, and Anderson does well to give them time to reach a synergistic alliance. On top of it all, the movie does have a genuine RPG feel to it, as the pair plan attacks and walk around with over-sized weapons that seem to inflict specific damage points to the monsters. In the end, it's all for the sake of mindless fantasy fun, an easy watch after a year of hardships.

Vital Disc Stats: The Ultra HD Blu-ray
Sony Pictures Home Entertainment brings Monster Hunter to Ultra HD as a two-disc combo pack with a Digital Copy code. When redeeming said code via sonypictures.com/MAredeem or MoviesAnywhere, users are granted access to the 4K digital version in Dolby Vision with Dolby Atmos audio. The UHD66 disc sits comfortably on the panel opposite a Region Free BD50 copy of the movie. Both are housed in the standard black keepcase with a shiny cardboard slipcover. At startup, viewers are directly taken to a static screen with the usual menu options along the bottom while music plays in the background. 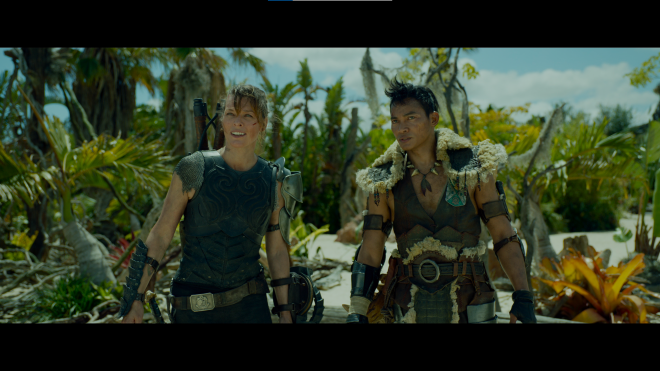 Coming from a 2K digital intermediate, the upscaled transfer boasts a sharper definition for a majority of the runtime and is most apparent during daylight exteriors. The threading in the costume is far more well-defined, and we can better make out the cracks and crevices of the rock formations from a distance. The individual grains of sand and strands of hair are very distinct, and facial complexions expose every pore and blemish in the entire cast. However, there are a few softer and poorly-resolved moments, here and there, most of which are related to the CG visuals and the fast-paced action sequences. It's nothing terribly distracting or enough to ruin the movie but still worth mentioning.

The improved contrast balance also makes for a more vivid and dynamic 4K video, supplying the action with crisp, radiant whites throughout. But the more noteworthy benefit comes from the specular highlights, boasting a tighter, dazzling glow in several areas, like the edge of clouds, the realistic sheen of metallic surfaces and the lightning bolts from the Sky Tower. Likewise, black levels are impressively richer and more precise than the 1080p HD version, providing the 2.39:1 image with a lovely cinematic appeal, and viewers can also enjoy better visibility of the finer details in the darkest, murkiest corners of the frame. Only, the same complaint in the BD is carried over into this UHD, during Artemis' escape from the Nerscyllas lair. Although much better resolved, some very mild chroma noise still remains, and some blacks still look a bit digitized and a shade crushing. Nevertheless, the entire sequence looks better here while brightness is more consistent.

On a more noteworthy side, the cinematography arguably benefits most from a wider color gamut, making the filmmakers' orange-teal palette more prominent and unmistakable compared to its HD SDR counterpart. The HDR10 presentation furnishes the visuals with a sumptuous array of primaries, which is immediately apparent in the cerulean blue skies and the lively, spirited greens of the oasis. Secondary hues, meanwhile, show a more nuanced boost but still add an attractively vibrant appeal to the action. Reds, however, are somewhat of a mixed bag where for a majority of the runtime, they appear fuller and more dynamic, rendering more accurate skin tones that are appropriate for the climate. But they can seem a bit digitized and cartoonish in some spots, particularly the lava and a couple times in the fire plumes from the Rathalos. There are also very mild and easy-to-miss instances of banding here and there, most prominently during Artemis' escape from the Nerscyllas lair while holding the flare. (HDR10 Video Rating: 90/100) 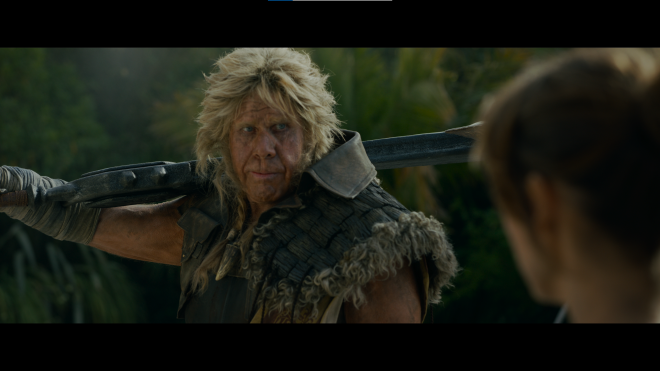 With a thunderous boom and an earth-shattering rumble, the entertainingly bonkers adaptation storms into home theaters with a monstrously awesome Dolby Atmos soundtrack. Like its DTS-HD counterpart, action sequences pack a massive, wall-rattling low-end that'll push the subs to their limits and add a couch-shaking oomph every time a monster wreaks havoc on screen. Some scenes even dig deep into the ultra-low depths, well below 30Hz with palpable weight, adding that little room-energizing extra to the imaginative visuals (bass chart).

With the extra breathing room, the mid-range comes through with slightly cleaner and better distinction into the upper frequencies, even during the ear-piercing shrieks of the creatures or the lightning bolts from the Sky Tower, which reverberate into all the channels with impressive clarity. Also, imaging continuously feels broad and expansive, as a variety of background activity moves into the off-screen sides and top heights with convincing effectiveness, creating a highly engaging half-dome soundstage. All the while, dialogue remains crystal clear and precise in the center, never overpowered by the most boisterous segments.

Likewise, the surround and ceiling channels are constantly employed with the roar of the monsters echoing all around, the violent winds from the sand storm blowing through every speaker, or debris raining down from above. The quieter, dialogue-driven sequences also come with subtle ambient effects or the musical score lightly bleeding into the sides and heights, maintaining a strong enveloping presence. On several occasions, the monsters can be heard overhead directly above the listening area either scratching at rocks, growling or roaring as they flawlessly pan across the room, generating an immersive hemispheric soundfield and making a fun listen to a goofy movie. (Dolby Atmos Audio Rating: 96/100) 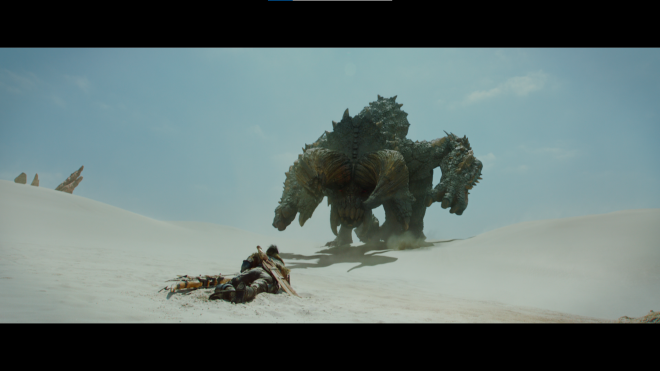 The same set of bonus features as the Blu-ray are ported over for this Ultra HD edition. 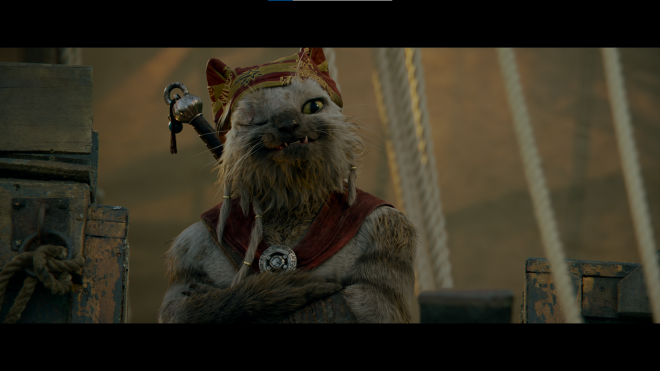 There is only one proper way for watching a Paul W.S. Anderson movie, and that is to set all expectations aside and simply enjoy the mindless, popcorn silliness. Based on the video game series of the same name, Monster Hunter not only demonstrates he has made a career at B-quality escapism, but that he is also decently good at churning out surprisingly entertaining shlock, especially when framing action vehicles for Milla Jovovich. The entertainingly bonkers adaptation teleports to Ultra HD equipped with a monstrously gorgeous 4K HDR10 presentation and thunderously awesome Dolby Atmos soundtrack, offering fans and the curious a notable upgrade over its Blu-ray counterpart. Porting over the same puny set of supplements, the UHD package is nonetheless recommended.