Kingsglaive: Final Fantasy XV is the prequel version of the unused elements from the hit video game Final Fantasy XV from Square Enix. Shot in its usual full motion-capture CGI, the film is a visual work of art with some fun voice acting. However, the story can travel to an extremely dense location, and those not familiar with this game franchise might feel lost in space. The 4K UHD transfer with HDR looks great with fantastic detail, however, there are a ton of soft spots in wider uses of landscapes that makes it feel like a different film. The other audio presentation on the other hand is fantastic. There are some very good bonus features to boot as well, all of which are fun to watch see how the filmmakers utilized the technology and voice actors. Recommended for Fans Only on this one. 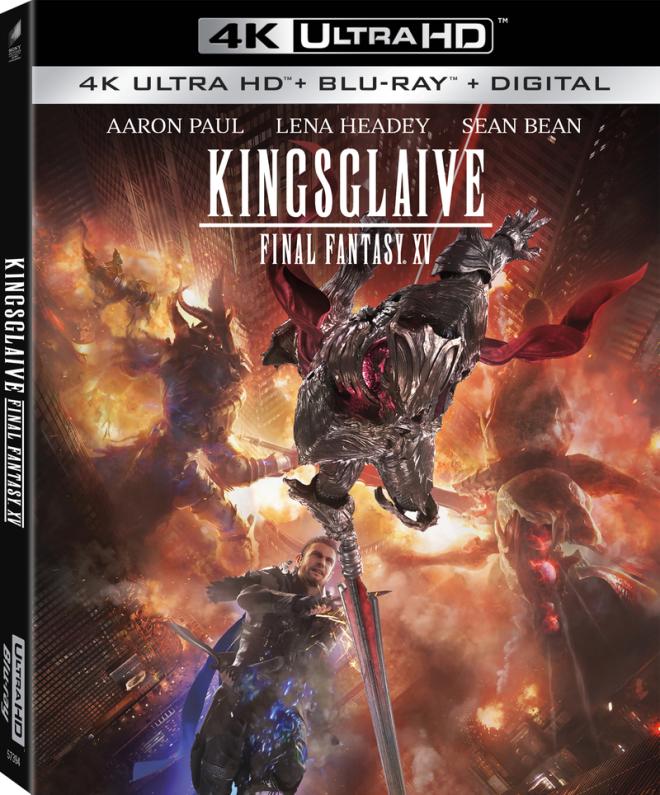 The popular video game company Square Enix has had a ton of success since the 1980s with popular game titles including Hitman, Tomb Raider, and of course their flagship name Final Fantasy. There have been a total of fifteen authentic Final Fantasy games to date with number sixteen on the way, not to mention several spinoffs along the way. With so many video games under their belt, it was inevitable that Square Enix adapt the franchise into the movie realm, which of course they did twenty years ago. But now, to go along with the Final Fantasy XV video game, a third feature film has been released called Kingsglaive: Final Fantasy XV that tells a direct prequel tale leading up to the events of the game. With Square Enix's patented and impressive CGI effects, Kingsglaive is a remarkable work of art, visually speaking. However, there are so many characters, factions, worlds, and history to know before going in that Kingsglaive might overwhelm the casual film watcher, despite doing a decent job of catching everyone up on its giant origin story.

Since 1987, the Final Fantasy franchise of all video games and its three films have grossed over $14 billion, which is to say this is one of the most influential and popular video games ever to be released and played over multiple decades. This iconic game did not start and stop with Final Fantasy VII as most would enjoy saying. There is still plenty of stories to tell. A couple of years ago, Final Fantasy XV was released and Square Enix wanted to jump back into the feature film arena once again to use all the discarded and deleted material for the game, which leads to Kingsglaive. Just Like Final Fantasy: The Spirits Within from 2001 that had every industry professional and movie fan discussing if the motion capture CGI technique was going to replace real live actors at one point, to Final Fantasy VII: Advent Children, and now with Kingsglaive, the CGI motion capture has only gotten better and more lifelike and realistic, where at times, it's difficult to tell a difference. It's stunning, to say the least.

Now, most people were at one point huge fans of a fantasy-like world in HBO's Game Of Thrones, where there were hundreds of different characters, families, histories, and family trees that were to be learned and remembered throughout its duration of almost ten years being on the air. That similar dense material of tons of characters and lore are included with Kingslaive, but now, everyone is given only two hours at the most to bond and care about any particular character. The content is there, but there are too many twists, turns, betrayals, surprises, and other chaotic elements that keep the narrative from walking a straight line, not to mention a jumbled mess of who's who to newcomers as the film progresses.

To break it down lightly, the film takes place on a planet called Eos, which is like a futuristic Earth. There is a kingdom called Lucis, which houses a magical crystal that was given to these humans by Gods and it used to protect the people and give power to the ruling King and his soldiers called the Kingsglaive, so they can ward off any enemies, mostly a militaristic group of crazies from Niflheim, who enjoy a pillaging and conquering those around them. Niflheim has been wanting to defeat Lucis for a long time now but has never been able to break through that magic crystal wall, which is led by King Regis (Sean Bean). Regis is not a young, spry chicken anymore, but rather old and on the verge of death, where he finally makes a peace offering with the Niflheim in exchange for land and his son Prince Noctis to marry Princess Lunafreya (Lean Heady) of a different family.

Of course, the Niflheim had ulterior and sinister motives, and just like The Red Wedding, they kill a ton of people in order to gain the magic crystal and rule the land. In the middle of all of this is a Kingsglaive soldier named Nyx (Aaron Paul), who is the main protagonist of the story as he makes some big sacrifices to save Lucis, the Princess, and his Kingsglaive colleagues. Friends are stabbed in the back, characters are not who they say they are, and mega monsters, demons, and spaceships riddle the landscape that climaxes into one big epic final battle, leading up to Final Fantasy XV the video game.

The visuals here are stunning for the most part. In fact, they are some of the best motion capture and CGI work seen on the big screen, but there are certain wide shots of cityscapes that still seem to be working on a Windows 95 computer, which is strange. But every character and action sequence is thrilling and comes with a bang. The voice acting by the Japanese and English actors is solid as well. The story though is too large and so many elements are in play that it's difficult to convey and execute them all in less than 120 minutes, given the grand nature and spectacle the story is trying to tell. And most of all, the average movie watcher who may have only heard the words Final Fantasy in passing will be mostly lost here. That being said, small-time and big-time fans of the game franchise will eat this all up, while the rest of the population will just marvel at the technical achievements Kingsglaive has mastered.

Kingsglaive: Final Fantasy XV fights its way to Sony Home Video. This set includes the Blu-ray Disc. The sole disc is housed in a hard, blue, plastic case with a cardboard sleeve featuring the artwork of the main villains and heroes of the story with fire and brimstone in the background. There is no insert for a digital code. 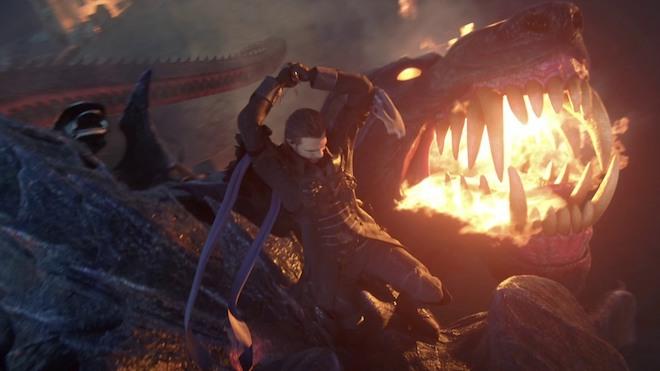 Kingsglaive: Final Fantasy XV comes with a good 2160p UHD transfer with HDR abilities, and is presented in a 2.39:1 aspect ratio. Being an entire motion captured and CGI film that was originally on a 2K master and upscaled to 4K for this release, the colors and detail look mighty good in certain ways.

The color palette is wonderful and with the added HDR, these different color spectrums are lively and bold. The beautiful neutral colors of the forest with green leaves, brown bark, and grays skies look amazing here that contrast nicely with the high-end technology flying overhead. When these landscapes are thrown into a literal hell of wartime explosions and blasts, the screen lights up with excellent bursts of orange, red, and yellow. This is a rather mild color palette that looks more grounded than any other animated feature from Pixar and that's a breath of fresh air. Black levels are deep and inky too.

The detail on the motion-captured faces is incredible. Individual facial stubble, pores, skin and wardrobe textures, and even the smallest dents and differentiating surfaces in body armor are visible. Again, it's s modern marvel to see visual effects this good. That being said, there is a reverse to this greatness. The establishing wider shots of locations are extremely soft and murky at times.

Nothing is really happening in these fast sequences, but it's such a stark contrast from every other action beat or closeup of a character that it doesn't feel like the same movie and looks like something out of the vintage CG animated Saturday Morning Cartoon, Reboot. This 4K presentation is a nice upgrade from the Blu-ray version and has minimal video issues.

This release comes with a DTS-HD MA 5.1 audio mix and sounds fantastic. It's surprising there is no Dolby Atmos option here because this film and its action sequences beg for something that impressive. Still, this 5.1 audio track is no slouch by any means. The sound effects are robust and loud on a consistent basis. Every explosion, epic battles, and crumbling building sounds impressive. The way debris flies around when something is destroyed is wonderful as every piece of metal or dirt transitions smoothly from one speaker to the next.

There is a good low end of bass as well, especially when the spacecrafts fly and the giant monsters stomp their feet on the ground, making a good rumble to each noise. The atmospherics of smaller and quieter sounds are great as well in large rooms and spaces that have the necessary reverb and echo that is needed. The score always adds to the suspense and drama in each scene, and the dialogue is clean and free of any audio problems. 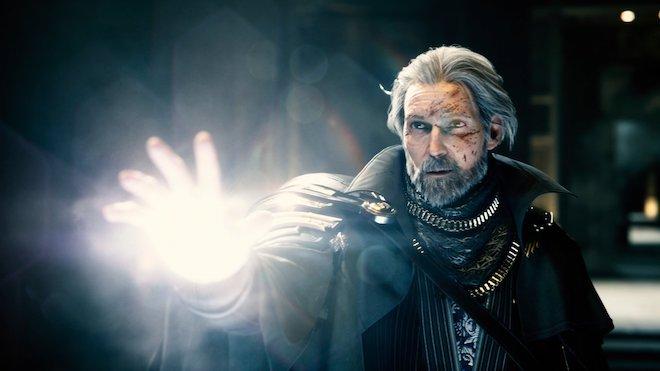 With around 23 minutes of bonus material, these extras, are quick, concise, fun, entertaining, and informative. There's not a ton of content, but what's here is worth the watch.

Kingsglaive: Final Fantasy XV is a great story and prequel to the hit video game Final Fantasy XV with some extraordinary visuals, good voice work from a stellar cast, and a wonderful story. That said, the history and characters can get convoluted and dense in the two-hour run time to fully understand the scope of what's being shown, and people not keen on this franchise will be lost. The 4K UHD video presentation with HDR is very good and elevates the visual style with a superb DTS-HD 5.1 audio mix to match. The extras are worth picking through as well. If you're a stalwart fan of the franchise, this 4K Ultra HD Blu-ray is the way to go. Recommended.