There's yet another new Complete Series Set available for one of the best shows on tv - Game Of Thrones. Only this time around we're getting the visual splendor of 4K Ultra HD Blu-ray. The 4K Discs are neatly packaged with Dolby Vision and HDR10, along with new Dolby Atmos audio tracks on each episode. Almost all the previous bonus content with each season and release has been ported over to this set that follows the lives, deaths, wars, and romances between several families in Westeros. The 4K transfer on each season is excellent and the Dolby Atmos tracks are magnificent. This is a great purchase and HIGHLY RECOMMENDED replacement for the individual seasons or if you haven't purchased the series yet. 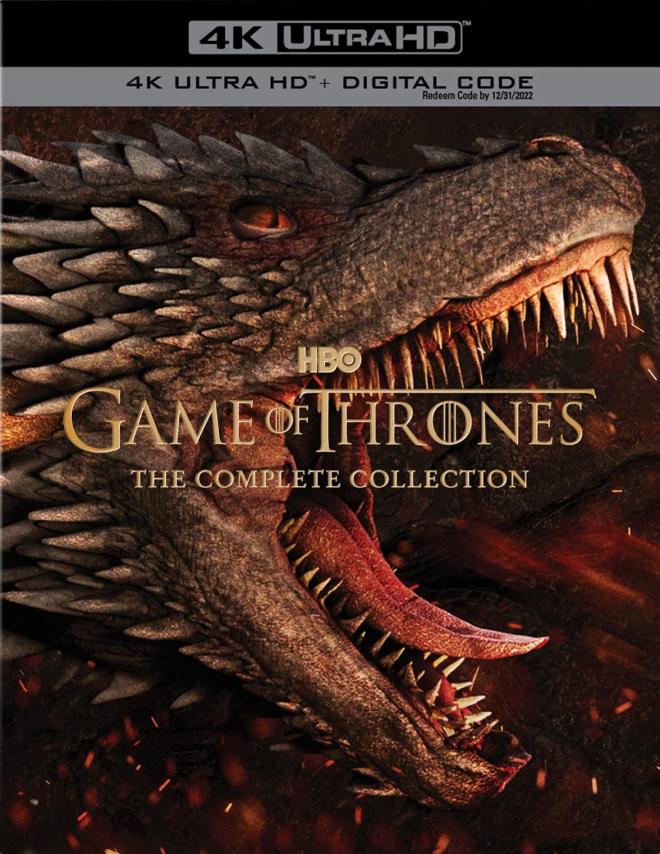 A television show that took place during a magical medieval time period, populated with zombies, mystical creatures, monsters, giants, and dragons was not expected to be one of the best shows on television. But that's what Game Of Thrones became - the best, most-watched, and talked about the show for eight years showcasing the lives and deaths of several kingdoms in the fictional land of Westeros. Closely following a group of families known as the Starks, the Targaryens, and the Lannisters, all of who are vying for the iron throne to rule the world, cross vicious paths of blood, betrayal, torture, and sex before winter shows up on the front lawn.

Through eight seasons, this HBO series grew in popularity by the millions, crossing over into not just genre fandom, but mainstream pop culture, weaving in and out of detailed and complex storylines, family drama, and carnage alike for almost a decade. Through large surprises, twist season cliff hangers, outrageous deaths, and wonderful romances, Game Of Thrones set the high bar for future tv shows and stories to be told over the course of several years - that is until its final season which is arguably its worst season. Still, it's about the journey and not the destination, correct? The amount of time, detail, love, and nuanced performances that went into this series is uncanny and might never be replicated again. There's a lot to love and enjoy in this immersive world of Game Of Thrones.

Below are the links for the individual seasons for those wanting a more elaborate review of the story in each season.

Game Of Thrones Complete Series flies its way to a new 4K Set from HBO and Warner Bros with thirty-three discs (three of which are 1080p Blu-ray Discs that contain bonus features, and a digital code for the complete series. The discs are separated across nine hard-black plastic cases with an average of four discs per case - depending on the season. Each case has new artwork on the front and back with info about the season. There is a booklet with new artwork that lists out every episode from each season and all of its bonus content. All of the case and booklet are housed in a cardboard case featuring the main dragon of the show. A complete series digital slip is included but only redeems in HD on VUDU. 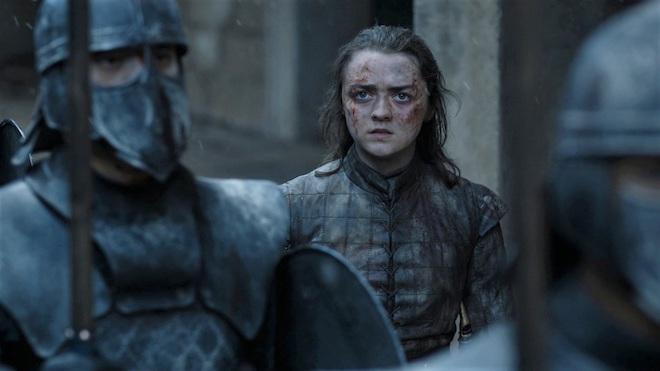 Game Of Thrones The Complete Series is presented in 4K with a 2160p UHD transfer with an aspect ratio of 1.78:1 for each episode. Dolby Vision and HDR10 enhance the detail and color palette for those equipped for the upgrade.

The color palette is quite bold in any lands of Westeros and it is revealed in each season that boasts both earthy tones and magical realms with everything in between to a tee. Season one, episode one of Game Of Thrones started in April of 2011, which was the same year that the first Thor film was released and Fast Five drifted onto the big screen. It was that long ago. The point is that some ten years ago, the video technology wasn't as advanced and clear as it is today so as each season progresses, the detail and the color get a bit better with of course season seven and eight being the stand-outs of the series.

Still, those early seasons have been cleaned up and look amazing here in this new 4K set. The harsh cold of Winterfell boasts some series of blue and icy tones that mix well with the black and brown structures that house their citizens. Flashes of yellow hay and occasionally red or blonde hair contrast nicely with the steely cold look of the area. This is consistent with each season as well whereas time goes on, the color shifts to even a darker and bluer tone as Winter is Coming. Across the landscape to much warmer climates are Casterly Rock and Essos where amber, orange, yellow and red are the main colors on display. The red, gold and stone-like structures in Casterly Rock look fantastic and bright that goes well with the blue sky and ocean that surrounds it.

The greenery comes in when characters travel through the woods, which is always superb. The intense orange and red fire the dragons breathe looks amazing as well with eery breath looking meaner and brighter than before. That HDR10 and Dolby Vision works wonders with these colors, bring them new life in a more realistic transfer this time around. Black levels are definitive and inky with some great detail revealed even in the darkest of scenes without any murkiness or crush. Skin tones are also natural.

The detail is vivid as well and has a great uptick in closeups as well as wider shots. The heavy CGI in the later seasons is phenomenal with every scale on a dragon easily seen, along with the textures of their mouths, tongue, and fire. The white walkers themselves reveal their decayed skin and mystical blue eyes perfectly. Other close-ups showcase individual hairs in beards, faces, violent gory wounds, amputations, and first around suits of armor and blades of steel.

The wider shots both practical and computer-generated are incredible from gigantic castles and thrones to small bursts of battles with big armies running in all directions. During season one and two, some of the bigger action sequences can be on the softer looking side, but as the series went on, the technology got better and therefore the image is presented in a cleaner and crisper manner. There are no video issues to speak of here either. This 4K set looks even better than the already wonderful looking Blu-ray releases. 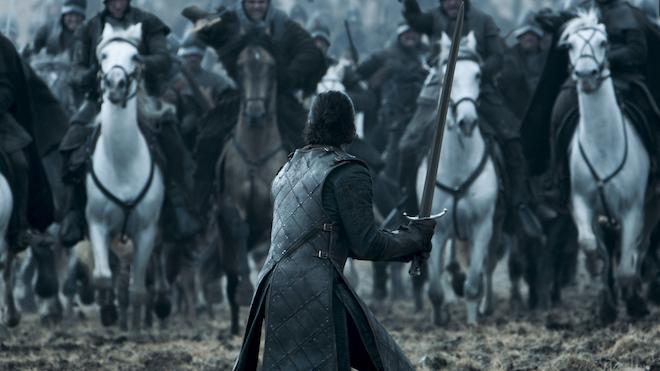 For fans that are clamoring for a complete 4K video collection will also be impressed by the inclusion of a Dolby Atmos audio track on every episode. The discs default to Dolby Digital 5.1 though, so it will require some remote control handling to switch over to the impressive Dolby Atmos mix. After that, the sound is phenomenal. The final two seasons really bring the guts and glory to the audio landscape with some intense battles with thousands of characters fighting each other, along with some wonderful atmospherics of dragons swooping in and out of frame to great effect. These sound effects are robust on a grande scale and always packs a powerful punch.

The big epic war scenes have an incredible amount of noise from all speakers that completely immerses the viewer with tons of sword clanks, arrows flying by, yells, screams, and more that have exceptional directionality. The smooth transition of audio between each speaker is seamless and perfect with great ferocity. The quieter sequences all have the necessary reverb in large spacial environments with an abundance of ambient noises of nature and animal noises, and more. The height channels bring forth the raindrops, storms, fire arrows from on high, and dragons flying in the air. For gorehounds,  the crunching of bones, slices of flesh, and gooey entrail explosions all pack a great amount of squish and goop to remarkable effect. Lastly, there are no issues with dialogue as it's all cleanly presented and full of life. 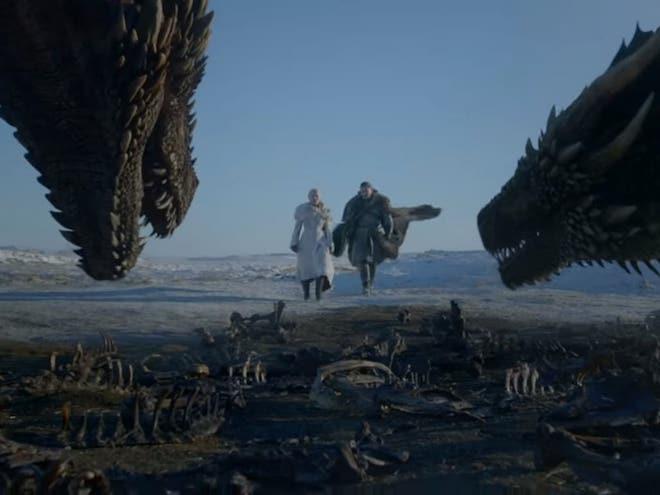 Spread across the eight seasons comes many, many hours of bonus material, including behind the scenes, auditions, deleted scenes, audio commentaries, stunts, visual effects, and more. There are NO new extras on this release, however, most all the previous bonus features have been ported over with the exception of a few. There are three bonus discs (1080p Blu-rays) with even more content.

See the linked reviews above for a breakdown of those bonus features. 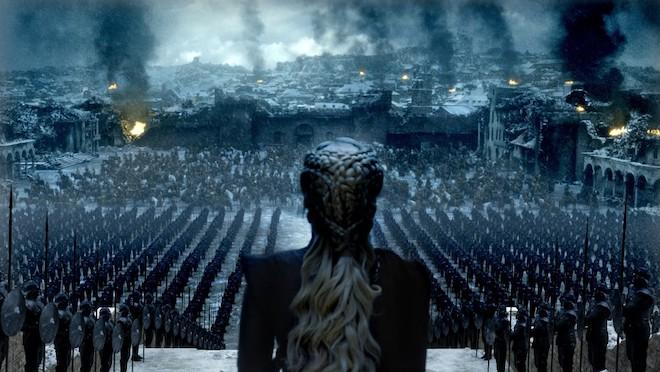 There have been many releases of Game Of Thrones since 2011, including the Blu-ray versions of each season, Collector's Sets, and even 4K seasons and their respective Complete Gift Sets. Is there a definitive edition yet? Yes to some. No to others. With this 4K Complete Collection though, each episode has a wonderful upgrade with Dolby Vision and HDR10, along with a Dolby Atmos track on every episode, which might be worth the purchase alone. Additionally, most all the previously released bonus features and commentary tracks have been imported over here from past releases. This set is supposed to replace the individual seasons that have been purchased every year since the show started and it's a fantastic replacement. However, if you haven't bought each season or complete series or Collector's Sets along the way - this is the best way to get the complete adventure of Westeros - Highly Recommended!