Over the last couple decades, Daniel Craig has become such an established actor — in large part due to his role as James Bond — that I always forget he once starred in Lara Croft: Tomb Raider alongside marquee headliner Angelina Jolie. Looking back at the movie, it's easy to see why Craig's performance is unmemorable. He plays a terribly pointless character, either tacked on simply because director Simon West (Con Air, The Expendables 2) wanted Craig in the movie or the writers were forced to pen a love interest for Jolie's tough yet voluptuous heroine Lara Croft. Early on, Craig's Alex West is established as a competitive rival and possibly former lover, but his crooked, gun-for-hire roguishness lands him a job with the Illuminati and the ruthless tactics of Manfred Powell (Iain Glen, better known as Ser Jorah Mormont of Game of Thrones fame). When Alex's talents prove less than satisfying, Lara is brought on to search for a pair of mystical stone keys called The Triangle while revealing latent feelings for Alex, which leads to a later dire decision.

Based on the popular video game about a talented and skilled treasure hunter, the plot is ultimately made up of fantastically silly nonsense — something about the planetary alignment of the solar system and the power of God. But those familiar with the original source material already know that going into the movie. The point of this 2001 action adventure blockbuster is, after all, about seeing Jolie in skin-tight outfits performing death-defying stunts. And in that respect, the high-concept movie delivers, mixing practical effects with CG imagery as though aspiring to be the next Indiana Jones franchise. Gravely falling short of its intended goal, the end result is a tepidly entertaining popcorn flick with nearly all the action sequences feeling flat and so orderly structured, it seems easy for the heroine, which in turn, feels routine and lacking any sense of danger. Nevertheless, the movie was enough of a box-office success to warrant a sequel that amazingly is not any worse but arguably better. 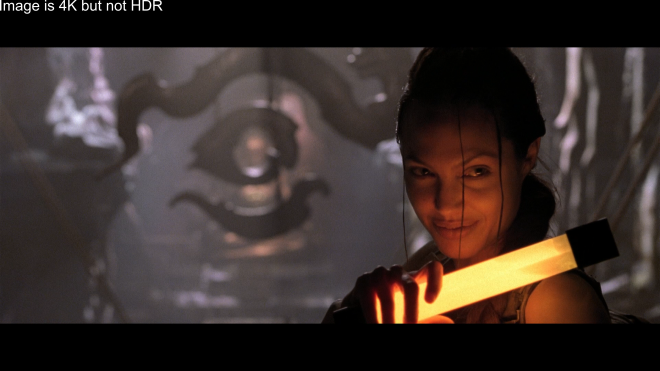 Paramount Home Entertainment brings Lara Croft: Tomb Raider to 4K Ultra HD Blu-ray as a two-disc combo pack with an UltraViolet Digital Copy, which can be redeemed via ParamountMovies.com, giving users access to a 1080p HD copy, or VUDU, which unlocks the 4K Dolby Vision version. Inside the black, eco-vortex case with glossy slipcover, the dual-layered UHD66 disc sits comfortably opposite a Region Free, BD50 copy. At startup, viewers are taken directly to a static screen with the usual selection along the bottom and music playing in the background.

The world's most beautiful and athletic archaeologist raids the tombs of 4K Ultra HD with a strong HEVC H.265 encode in Dolby Vision HDR, but the jump from her previous treasure hunt in HD won't likely leave much of an impression.

Granted, the transfer shows many welcomed improvements, starting with a small uptick in overall resolution, revealing better textures and fine detailing in the clothing and the faces of the cast. However, this is a very small jump, and the majority of the picture falls on the softer side of things with several glaringly blurry sequences throughout. Most of these are understandably due to the dated CG visual effects, and the wide-shot photography of certain locations that look more like matte paintings. The arguably worst aspect of the 4K presentation is the severe ringing around the edges of buildings during high-contrast shots, which is not evidence of edge enhancement but is as equally distracting. Added to that, a few fast-paced action sequences tend to look a bit noisy while calmer, more dialogue-driven scenes show a nice, thin layer of natural grain, occasionally giving it a welcomed film-like quality.

On the whole, the HDR transfer displays average contrast levels, giving much of the picture a slightly grayish, toned-down appearance, which could be the deliberate, stylistic choice of cinematographer Peter Menzies Jr (The Expendables 3, Gods of Egypt). Nevertheless, whites are not any brighter or significantly different from its HD SDR counterpart. On the other hands, specular highlights provide a better, more realistic shine along the edges of guns, the various metallic objects and the stone pieces everyone is chasing after. Blacks also show an appreciable improvement, providing the 2.35:1 image with richer, darker shadows than before. Lara's hair appears silkier and of a noticeably different shade than her jet-black belt, gun holster, and other straps. The overall color palette seems affected by the somewhat subdued contrast, as secondary hues appear limited and lack variety while skin tones waver between natural and sickly flushed. Primaries, however, are fuller and a tad more vivid, but not by a great deal, making the Dolby Vision presentation a welcomed improvement but not particularly impressive overall.

When the action-adventure flick first raided HD home theaters in 2006 — just a few months after the Blu-ray format was officially released into the market — Paramount Home Entertainment ported over the same DTS and Dolby Digital 5.1 track heard on DVD, which was not bad for the time. Twelve years later, the studio has finally upgraded the 2001 blockbuster to a DTS-HD Master Audio 5.1 soundtrack, and overall, it sounds fantastic, sure to rock anyone's system.

However, the movie is also arriving at the party pretty late in the game and can't really compete with some of the best high-resolution tracks currently available. It's a sad case of too little, too late, starting with feeling somewhat limited in the upper ranges and lacking the sort of warmth and extension needed to make the many action sequences more engaging. That's not to say, the design doesn't display plenty of clarity and distinction between the various noises because it does. Thing is that explosions and gunshots come off hollow and empty while the many electro tunes lack fidelity, creating a noticeably flat and level range. The rest of the soundstage, on the other hand, enjoys good balance and fluid movement between the three channels while vocals remain clean and well-prioritized. Low bass is responsive and plentiful, adequate for providing the action with appreciable weight and oomph, but it's not particularly impressive or standout. The surrounds are fairly active for a majority of the runtime with excellent directionality and good panning effects, creating a generally satisfying soundfield that can feel immersive at times.

As a fan of the video game, I was initially excited to see director Simon West's adaptation, Lara Croft: Tomb Raider, when it released nearly twenty years ago. But as is often the case with productions based on video games, I left theaters sorely disappointed, not so much with Angelina Jolie's or Daniel Craig's performances but with the lack of thrills and excitement due to rather banal action sequences. Over ten years since it originally arrived on Blu-ray, Paramount Home Entertainment brings the action-adventure flick to 4K Ultra HD with an average-looking but still strong Dolby Vision HDR presentation, but the win here is the new DTS-HD soundtrack offering a more notable improvement. With the same set of supplements as before, the overall package is ultimately for fans.

Sale Price 18.99
List Price 25.99
Buy Now
3rd Party 10.32
In Stock.
See what people are saying about this story or others
See Comments in Forum
Previous Next
Pre-Orders
Tomorrow's latest releases