In this spectacular action-adventure, the survival of mankind hangs in the balance as an unexpected mortal hero Bek [Brenton Thwaites] undertakes a thrilling journey to save the world and rescue his true love. In order to succeed, he must enlist the help of the powerful god Horus [Nikolaj Coster-Waldau] in an unlikely alliance against Set [Gerard Butler], the merciless god of darkness, who has usurped Egypt's throne, plunging the once peaceful and prosperous empire into chaos and conflict. As their breathtaking battle against Set and his henchmen takes them into the afterlife and across the heavens, both god and mortal must pass tests of courage and sacrifice if they hope to prevail in the epic final confrontation.

Geoffrey Rush flying across the heavens on a boat towing the sun while he shoots fire at the ancient Egyptian demon Apophis might sound like a so-bad-it’s-good movie, but Gods of Egypt doesn’t quite reach those heights. Sure, Rush as the Egyptian god Ra provides some chuckles in an otherwise drab film, but it’s not enough to lift it from its lifeless grave.

Dark City is great science fiction. I’m an ardent defender of Knowing, but Alex Proyas’ latest is a CGI wasteland of spent tropes and uninteresting themes. His take on treating the Egyptian myths as if they were reality is a curious one, however it fails to realize its potential. Perhaps that’s because the movie is far too interested in its own visuals to care what’s beneath the surface.

Here we have the story of how Horus (Nikolaj Coster-Waldau) is forced from being the next in line to rule Egypt by his jealous uncle Set (Gerard Butler). Butler seems tailor-made for these kinds of roles. Throw some generic armor on him, give him a sword, and watch him scowl. Just as Horus is about to be crowned king of the gods, Set shows up and spoils the party. That’s not before we’re inundated with superfluous exposition about the gods, how they’re taller than normal people, how their blood is actually molten gold, and how all this we’re looking at came into being. The prologue seems to go on forever. Mercifully, it ends right around the point Bulter shows up and starts yelling at everyone.

There’s part of me that wants to embrace this malformed spectacle as something that most people just didn’t get. Unfortunately, I’m positive the unanimously under-enthused reactions are simply spot on. 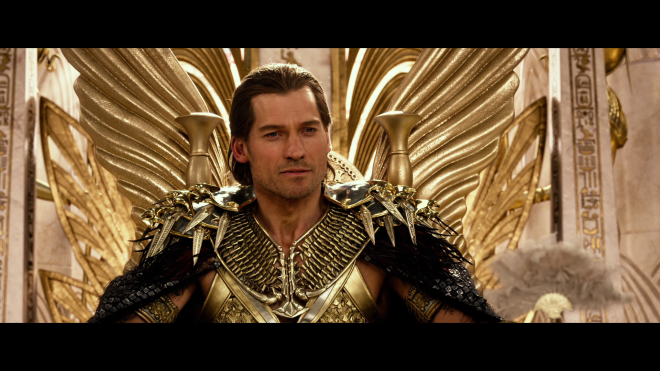 Proyas tries dressing up this ho-hum big-budget blockbuster with special effects that appear instantly dated. It’s strange that a movie with the most attention applied to special effects can appear the phoniest. Less is more, right?

I wanted desperately to like scenes where female warriors ride around on giant fire-breathing cobras and when it happened I could barely muster a smile. Because beneath all that CG is a soulless movie that has no narrative direction whatsoever. Sure, Horus is trying to regain his throne with the help of a mortal named Bek (Brenton Thwaites). That could be an interesting dynamic, but it’s simply an odd coupling thrown together, because odd couples make the best road trip duos.

Then there are these times where the gods transform into large metallic creatures resembling the animal-headed Egyptian gods. They fight exactly like you’d expect large computer-generated creatures to fight – awkwardly. Each time it happens it feels the same as the last time it happened. Even now I’m trying to remember one memorable action scenes and I keep on thinking about the fire-breathing snakes and that’s it.

The movie’s not a total loss though. As I mentioned earlier Geoffrey Rush is cruising the skies fighting a demon and chewing up the scenery of outer space. He sports his I’m-cashing-a-paycheck grin and throws all he has into this silly movie. His performance is a bright spot amid the doldrums of Butler scowls and Coster-Waldau smirks. At least Rush is trying to do something with his character. I found myself wishing that the Gods of Egypt could’ve been called the "God of Egypt" and simply been the story about how Geoffrey Rush’s Ra created everything. Perhaps then it would’ve been an interesting way to waste a couple hours. As of right now, it’s just a waste.

Summit Home Entertainment brings Gods of Egypt to 4K Ultra HD Blu-ray as a two-disc combo pack with a flyer for a Digital HD Copy. At the moment, we are unable to verify the correct size of the content, but the double-layered UHD66 disc sits comfortably opposite a Region A locked, BD50 disc inside a black, eco-cutout case with a glossy slipcover. At startup, the disc goes straight to the main menu with full-motion clips and music.

By the glory and grace of the gods, the fantasy adventure flick bursts unto the screen with a wildly colorful and highly-detailed HEVC H.265 encode. Definition and clarity is a step-up, exposing the threading and stitching in the various costumes while hairs are thin and resolute. With healthy-looking flesh tones throughout, the faces of the cast come with a natural, revealing complexions that's appropriate to the fantasy climate. The stone architecture of the buildings come with plainly visible pockmarks and scratches. However, there are also several softer moments worth taking into consideration, many of which are related to the 2K CGI visual effects, which also are made all the more distractingly obvious in this 4K transfer. Nevertheless, a majority of the picture is sharp and detailed.

Shot digitally on the Red Epic Dragon camera system, capable of 6K resolution, the presentation displays a wider array of colors than its BD counterpart. Although it may seem at first minimal, primaries are actually richer, such as the reds in the body armor of Set's army, which are fuller and more in the shade of crimson blood. The greens in the few scenes with grass and trees really pop. Much of the palette, however, deliberately favors softer pastels and earth tones with lots browns and yellows. While the gold in the gods' blood and their protective combat gear shines with incredible brilliance, the various neons in Nephthys' metal-like wings glimmer and glow with intensity. The bright blue sky is often overflowing with flashes of pink, orange and magenta, depending on the time of day.

Presented in a 2.40:1 aspect ratio, the 2160p video also comes with excellent, comfortably-bright contrast level. It's not dramatically brighter than the HD version, but discerning viewers will note cleaner, sparkling whites in many of the outfits and some of the marble architecture. The most notable improvement is in the specular highlights, providing the brightest edges of clouds a realistic silver lining while the metal of swords, armor and other costumes glisten and twinkle against the sunshine. Noteworthy scenes are those with the specks of gold shimmering in the waters beneath Ra's divine vessel. Though the darkest shadows tend to engulf the finer details in a couple sequences, black levels are often rich and opulent, providing the 4K presentation with a lovely cinematic quality.

The gods elevate their celestial battles to a DTS:X soundtrack that's sure to make the house rumble and crash as if it were the end of the world.

Granted, the design was originally made for legacy Dolby Digital, but engineers did a great job in expanding several sound effects into the extra ceiling speakers. Most of the action and chaos spreads into the sides and rears, generating a satisfying soundfield busy with subtle atmospherics, like the cheers from crowds, the booming screams of Apophis and the howling winds in the black desert of the underworld. However, on several occasions, the violent gusts of sand, the roaring waters during Horus and Bek's fall and the thunder of Apophis' attack on the Nile flawlessly pan into the overheads. The final fight of the last quarter, where Horus and Set duke it out while in their true form, comes with a variety of noises, as the two gods take to the sky and swing one another to the other side of the room.

The design's real strength though is in the front soundstage, which feels expansive and spacious throughout. With clear, precise vocals in the center, the action fluidly travels between all three channels with convincing off-screen effectiveness and excellent balance. When the action erupts, imaging is layered with various, discrete sounds showering the screen and generating an immersive half-dome wall of sound, such as the metallic, almost crystalline debris from the weapons of the gods clashing or their armor shattering everywhere. A deeply powerful and sometimes commanding low-end adds a great deal of impact and oomph to each clash, providing the object-based format with an appreciable sense of presence and weight.

On Location: Shooting in Australia (HD, 13 min): A tour of some of the shooting locations seen in the movie but nowhere near recognizable beneath all the CGI.

A Divine Vision: Creating a Cinematic Action Fantasy (HD, 12 min): The typical short making-of piece with interviews focusing on the visual effects and bringing the story to life, mixed with lots of BTS footage.

The Battle for Eternity: Stunts (HD, 12 min): As the title suggests, viewers can learn more about the fight choreography and the amount of work that went into it.

Transformation: Costume, Make-Up and Hair (HD, 11 min): The title leaves little to the imagination, but for those interested, the discussion can be decently informative.

A Window into Another World: Visual Effects (HD, 11 min): A collection of BTS footage on the incredible amount of VFX and everyone endlessly praising it.

Of Gods and Mortals: The Cast (HD, 11 min): More interviews and BTS footage on the actors involved, their individual roles and performances.

For a major, big-budgeted visual extravaganza, Gods of Egypt has got to be one of the most beautifully boring movies ever made. Then again, beautiful is also a very subjective thing, but as long as Gerard Butler and Nikolaj Coster-Waldau is beautiful in your eyes, then Alex Proyas's latest action fantasy might be decently entertaining. The Ultra HD offers a nice step up over its Blu-ray counterpart and includes the same excellent DTS:X soundtrack. Supplements are pretty lackluster, but the overall package is worth checking out for UHD enthusiasts hungry for more 4K goodness.

Sale Price 32.99
List Price 42.99
Buy Now
3rd Party 24.75
In Stock.
See what people are saying about this story or others
See Comments in Forum
Previous Next
Pre-Orders
Tomorrow's latest releases