John Carpenter's iconic slasher Halloween takes another stab on 4K UHD Blu-ray with a SteelBook repackaging that is exclusive to Best Buy in the U.S. - The exact same discs are included, there hasn't been any sort of remastering or anything of the sort. The lone difference is the artwork for the standard Blu-ray is different than Lionsgate's original release. This set also includes a digital copy slip that redeems in HD on VUDU. If you haven't picked this one up, this SteelBook is one way to go even if it forgoes the iconic artwork. Worth A Look

NOTE: This set is currently no longer available online at Best Buy, but check your local store there are copies floating around out there. My local store had a few on the shelf in the SteelBook dedicated section.

"One of the most financially successful independent motion pictures of all time, John Carpenter's highly influential Halloween is the kind of horror movie that creeps out at you from behind the bushes and taps you on the shoulder, sending a long, ice-cold chill down your spine. And like its star boogeyman, Michael Myers, it is a film whose legacy just won’t die. With its cheap budget, simple premise and highly imitable conventions — girl, monster, knife, blood — Halloween begat one of the most incredible phenomena in recent motion picture history: the slasher movie. Yet Carpenter's stylish scare-fest is so much better than its imitators as to be almost incomparable; it has been called the most terrifying motion picture next to Psycho and The Exorcist, and for once, the hyperbole is not that far off the mark."

"Although it presents an admittedly simplistic modern fable — Myers returns home on Halloween, fifteen years after brutally murdering his sister, to wreak even more havoc on a trio of babysitters — Carpenter's minimalist brilliance proved impossible not to copy. Simply put, upon its debut in 1978, Carpenter and co-scenarist Debra Hill's skeleton-thin narrative was the perfect film at the perfect time, tapping into America's then-growing fear of random, faceless, unmotivated violence. Myer's "The Shape" remains a terrifying cinematic creation because of its very blankness — the white mask (actually a painted visage of Star Trek's William Shatner!), black eyes and almost robotic walk suggest pathology at work but never explain it. Myers is just smart enough to be truly dangerous but lacking the intelligence to allow for reason, and he's the archetypal boogeyman, evil personified in human form and blown up to mythic proportions."

Between the previous Blu-ray releases, the amazing Scream Factory set that has sadly now gone out of print, and the first 4K UHD Blu-ray release, John Carpenter's Halloween has enjoyed a long home video shelf life. Like many kids of the 80s, I didn't get to discover this slasher icon in the theater - I had to watch it edited for television. In fact, that's actually how I saw the entire series of films until I snuck my way into the theater for Halloween: The Curse of Michael Myers. I remember it being so strange when I got to see the original film uncut and without the added television footage - it honestly felt like a different movie. It also helped there weren't any commercials to break the tension, but that's how I got to see all of the slashers of the day. They shaped my childhood and now that I'm closing in on 40 I'm hip-deep in reconnecting with the things I loved then that still bring me joy. I've seen Halloween a thousand times by now I'm sure, but every time I start it I can't look away.

With each release, I'm always compelled to pick it up. From VHS to DVD to Blu-ray and now 4K, I didn't need a SteelBook of Halloween - I just really wanted one! When you have SteelBooks for every other classic Carpenter movie, your collection starts to look strange without one for a true classic. And generally, I like this off-white tribute to fall and the Halloween season with Laurie and the Shape rising out of fallen leaves. It's a pretty slick looking piece to be sure - but it's not the kind of iconic artwork one would hope for. If you're not going to use the amazing original poster art, there's so much amazing imagery throughout the film that could have served for more inspired custom artwork. This is still pretty nice though and looks cool on a shelf. 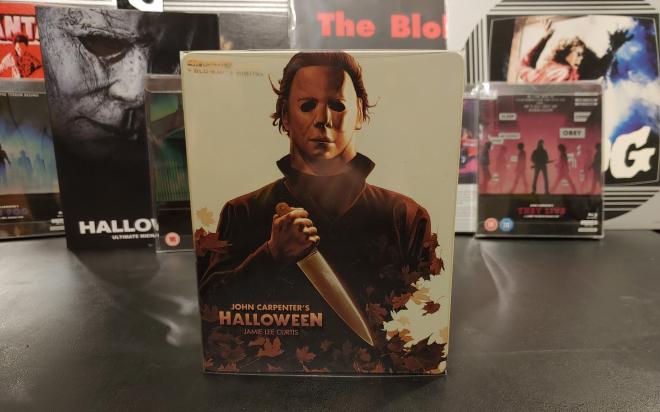 Lionsgate and Best Buy have teamed up to give fans the same release of Halloween 4K UHD Blu-ray with some slick new SteelBook packaging. The SteelBook has a plastic slip protecting it but also providing the title on the front and the disc specs on the back instead of a flimsy piece of paper. The two-disc set now also comes with a digital slip that redeems in HD through VUDU. Each disc gets its own ray and aren't stacked on top of each other. Worth noting compared to the original Lionsgate release, the standard Blu-ray disc has different disc art. It's the exact same Blu-ray disc originally released in 2007 from Anchor Bay. Apparently, they just have a lot of those discs laying around and need to put them somewhere.

The 4K disc is just as before and loads to a static image main menu with traditional navigation options.

"Sadly, Cundey's color timing change doesn't appear to have translated well in its ride to the HDR neighborhood, showing rather bland and weak contrast levels. Granted, whites remain clean and crisp throughout, but they also fall on the lower end of the grayscale, often looking more like a very light gray and giving daylight sequences a spiritless overcast feel. Specular highlights are notable in a few occasions, yielding a welcomed sparkle and dazzling pop to some of the brightest spots without ruining some of the finer details. In spite of riding in a new fancy Dolby Vision HDR vehicle, the palette also seems to suffer quite a bit and looks severely toned down, greatly affecting what was once the lush, vibrant greens of the neighborhoods. Reds, on the other hand, appear slightly deeper and fuller, and there is tad more variation in the secondary hues, like the animated orange of the jack-o'-lanterns, the warm yellow glow of the lamps or the various shades of browns from the 70s clothing to the furniture and other home furnishings. The blue tint of nighttime sequences is also much more apparent, giving Michael's iconic mask a steely arctic tone in many scenes."

"The seminal horror classic makes its way to Ultra HD with the same Dolby TrueHD 7.1 soundtrack as the Blu-ray. And like before, as much as the lossless mix is greatly appreciated with excellent dialogue reproduction, the design ultimately feels restricted while lacking fidelity and warmth. The mid-range isn't particularly dynamic or extensive, mostly coming off flat and uniform, and a hearty low-end is ample enough to give the music a bit of weight and depth but noticeable falters during the action sequences and gunshots. The surrounds don't really offer much to the experience although there are various attempts of atmospherics between the channels. Unfortunately, the subtle ambient effects feel forced and hollow, serving better as a distraction than a complement to the on-screen action. In all honesty, a lossless mono — or maybe, even a stereo — mix of the original track would have been an awesome option for audiophiles."

All the of same supplements are ported over from previous home video releases and can be enjoyed on the UHD, which can be read in more detail in our review of the standard Blu-ray HERE.

The perfect movie for the fall season, Halloween enjoys a SteelBook packaging upgrade on 4K UHD Blu-ray from Lionsgate and Best Buy. Aside from the artwork change and the inclusion of a digital copy, there's nothing new to this release. It still offers the somewhat controversial video transfer that's sparked a fair amount of debate as well as the middling 7.1 audio mix. So it comes down to asking yourself "do need this set - or if the original 4K release from 2018 is good enough?" It's worth mentioning this set can no longer be purchased on Best Buy's website, but I found my copy at my local store semi-buried in their dedicated SteelBook section. If you're hot to find this SteelBook and haven't located it yet, that's where to look first. All in all, this latest release of Halloween is Worth A Look.