John Carpenter's seminal horror classic Halloween IS the king of slasher films! After forty years of remakes, homages, parodies, and torture porn flicks, Carpenter's well-crafted, massively influential, and iconic film remains a simple, effective genre piece oozing with style and a creepy atmosphere that still delivers the goods. Death comes home to 4K Ultra HD Blu-ray with a somewhat disappointing Dolby Vision HDR presentation, features the same passable Dolby TrueHD soundtrack, and ports over the same set of supplements as before. The overall UHD package is Worth a Look for the most devoted and hardened fans. (Check out our Blu-ray review HERE.)

One of the most financially successful independent motion pictures of all time, John Carpenter's highly influential Halloween is the kind of horror movie that creeps out at you from behind the bushes and taps you on the shoulder, sending a long, ice-cold chill down your spine. And like its star boogeyman, Michael Myers, it is a film whose legacy just won’t die. With its cheap budget, simple premise and highly imitable conventions — girl, monster, knife, blood — Halloween begat one of the most incredible phenomena in recent motion picture history: the slasher movie. Yet Carpenter's stylish scare-fest is so much better than its imitators as to be almost incomparable; it has been called the most terrifying motion picture next to Psycho and The Exorcist, and for once, the hyperbole is not that far off the mark.

Although it presents an admittedly simplistic modern fable — Myers returns home on Halloween, fifteen years after brutally murdering his sister, to wreak even more havoc on a trio of babysitters — Carpenter's minimalist brilliance proved impossible not to copy. Simply put, upon its debut in 1978, Carpenter and co-scenarist Debra Hill's skeleton-thin narrative was the perfect film at the perfect time, tapping into America's then-growing fear of random, faceless, unmotivated violence. Myer's "The Shape" remains a terrifying cinematic creation because of its very blankness — the white mask (actually a painted visage of Star Trek's William Shatner!), black eyes and almost robotic walk suggest pathology at work but never explain it. Myers is just smart enough to be truly dangerous but lacking the intelligence to allow for reason, and he's the archetypal boogeyman, evil personified in human form and blown up to mythic proportions.

Though slow by today's quick-cut standards, Halloween is arguably one of the most expertly constructed modern horror movies. All ranking a cut above are the film's sharp cinematography by future Oscar-winner Dean Cundey, memorable performances by a cast of then-unknowns, including Jamie Lee Curtis in her debut performance as Laurie Strode and still the genre's honorary "scream queen," and Hill's fine ear for teenage "girl talk," which effectively counter-balances Carpenter's sometimes nihilistic worldview and his unrelenting need to scare the audience, occasionally at the expense of logic. 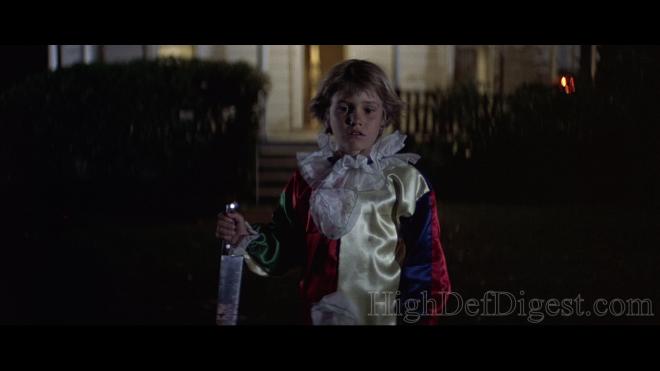 The film's most noted stylistic features have also been those most exploited by its imitators. The spooky haunted house interiors, cat-and-mouse games and "Gotcha!" scares are the cinematic equivalent of peek-a-boo, but they don't rely on a drop of blood to work up our nerves. Carpenter's sometimes sluggish pacing can tax our patience to the breaking point because he stretches the suspense to such a degree that we almost want him to kill his next victim just to get it over with. Yet, unlike so many of the copycat slasher pics and most of Halloween's own dreadful sequels, we never cheer Myers on, but instead, we are always emotionally on the side of his targets. Carpenter is an intuitive filmmaker who understands that it is not the blood and violence that gets the audience off but the build-up.

Sadly, the years have not been totally kind to Halloween if only due to the sheer dreck that it inspired. As was so evidenced by the recent, utterly horrid Rob Zombie remake, the material itself is not foolproof, and its elements are now so familiar that those seeing Halloween for the first time may wonder what all the fuss was about. But it is Carpenter's innate respect for craft — and absolute glee in playing the audience like a piano — that has earned Halloween its rightful place in the horror film canon as a must-see classic (and, it is worth noting, a fresh slot in the National Film Registry). It is the one American franchise horror film of the past three decades to rightly earn comparisons not only to Browning, Whale, Hitchcock, and Murnau but as one of the true greats of an ill-reputed genre.

Lionsgate Home Entertainment brings Halloween to 4K Ultra HD Blu-ray as a two-disc combo pack. The triple-layered UHD100 disc sits comfortably opposite a Region A locked, BD50 disc, which is the same 2007 Blu-ray with the warmer color timing. Both come inside a black, eco-cutout case with a glossy slipcover. At startup, the disc goes straight to a static menu screen without music.

Death comes home on 4K Ultra HD Blu-ray with yet another questionable, likely controversial, and perhaps even disappointing home video presentation. This new HEVC H.265 encode was recycled from the same highly-controversial 2013 remaster supervised and approved by cinematographer Dean Cundey.

Sadly, Cundey's color timing change doesn't appear to have translated well in its ride to the HDR neighborhood, showing rather bland and weak contrast levels. Granted, whites remain clean and crisp throughout, but they also fall on the lower end of the grayscale, often looking more like a very light gray and giving daylight sequences a spiritless overcast feel. Specular highlights are notable in a few occasions, yielding a welcomed sparkle and dazzling pop to some of the brightest spots without ruining some of the finer details. In spite of riding in a new fancy Dolby Vision HDR vehicle, the palette also seems to suffer quite a bit and looks severely toned down, greatly affecting what was once the lush, vibrant greens of the neighborhoods. Reds, on the other hand, appear slightly deeper and fuller, and there is tad more variation in the secondary hues, like the animated orange of the jack-o'-lanterns, the warm yellow glow of the lamps or the various shades of browns from the 70s clothing to the furniture and other home furnishings. The blue tint of nighttime sequences is also much more apparent, giving Michael's iconic mask a steely arctic tone in many scenes.

On the plus side — meaning the better-appreciated improvements — the 4K presentation displays a welcomed uptick in overall definition and clarity. It's not a leap and bounds upgrade, but fine object details and textures are sharper while exposing every nook and cranny in the background. The individual blades of grass and the leaves of trees are detailed, and the thick, rough stitching of the fabric on the sofa is distinct. Facial complexions appear largely pale and flushed, but they are nonetheless highly revealing. And viewers can better make out every wrinkle and blemish in Michael's iconic mask. The only nitpick are the several instances of aliasing along the chrome trim of the cars, which was also concern on the Blu-ray. Brightness levels also enjoy a tremendous boost, looking inkier and silkier than ever before and making the shadows seem more sinister. Delineation is brought down a notch but thankfully, not enough to completely ruin visibility in the darkest corners. The 2160p is also awash in a fine layer of grain throughout, providing the 2.35:1 image with a lovely film-like quality but other aspects are sadly lackluster. (Video Rating: 64/100)

The seminal horror classic makes its way to Ultra HD with the same Dolby TrueHD 7.1 soundtrack as the Blu-ray. And like before, as much as the lossless mix is greatly appreciated with excellent dialogue reproduction, the design ultimately feels restricted while lacking fidelity and warmth. The mid-range isn't particularly dynamic or extensive, mostly coming off flat and uniform, and a hearty low-end is ample enough to give the music a bit of weight and depth but noticeable falters during the action sequences and gunshots. The surrounds don't really offer much to the experience although there are various attempts of atmospherics between the channels. Unfortunately, the subtle ambient effects feel forced and hollow, serving better as a distraction than a complement to the on-screen action. In all honesty, a lossless mono — or maybe, even a stereo — mix of the original track would have been an awesome option for audiophiles. (Audio Rating: 64/100)

All the same supplements are ported over from previous home video releases and can be enjoyed on the UHD, which can be read in more detail in our review of the standard Blu-ray HERE.

Celebrating 40 years of creepy scares, John Carpenter's seminal horror classic Halloween remains a well-crafted and impressively stylized genre piece, featuring Donald Pleasance, the film-debut of Jamie Lee Curtis and the iconic masked monster Michael Myers. Simplistic and straightforward in both its plot and filmmaking, the movie essentially kickstarted the 80s slasher craze, inspired countless imitators — some more memorable than others — and influenced generations of filmmakers and horror hounds. Death comes home to 4K Ultra HD with a rather average but also disappointing Dolby Vision HDR presentation made from the same 2013 remaster approved by the original cinematographer and featuring the same passable Dolby TrueHD soundtrack as the Blu-ray. Porting over the same set of supplements as before, the overall UHD package is worth a look for the most devoted and hardened Halloween fans who must own the film on every home video format.

Sale Price 14.99
List Price 22.99
Buy Now
3rd Party 14.99
In Stock.
See what people are saying about this story or others
See Comments in Forum
Previous Next
Pre-Orders
Tomorrow's latest releases