Pixar Studios delivers another heartwarming, tear-jerking winner in Onward, but the fantasy adventure film doesn't quite cast the magical spell expected of the studio. The CG-animated flick crashes into 4K Ultra HD with a strikingly gorgeous HDR10 presentation, an excellent Dolby Atmos soundtrack but the same set of bonus material. Nevertheless, the UHD edition makes for a Recommended watch on family movie night.

After twenty-one feature-length films, the always-invented visionaries at Pixar have certainly mastered an established formula for churning out sure-fire hits, and their twenty-second CG-animated feature Onward is clear evidence of that. This is not to suggest the plot about two elf brothers on a quest to resurrect their deceased father is bad or even the least bit disappointing. In fact, it's quite good and guaranteed to draw approving cheers from younger viewers, but there is also something much too familiar and predictable about their mission, leaving little room for unforeseen surprises or the usual tear-jerking emotional insight we've come to enjoy from the animation studios. For a story set in a world full of magic and mythical creatures, the film is charming enough but ultimately, doesn't feel all that magical.

On the one hand, this is a relatively simple story of elf siblings Ian (Tom Holland) and Barley (Chris Pratt) given the prospect of spending a day with their deceased father. For Ian, this is a particularly momentous opportunity since his father passed away before he was born, knowing him only through pictures and a very brief tape-recording of his voice. But for Barley, it is a chance to hopefully make more than the three memories he has with his father, one of which involves the way he tapped his feet, which the filmmakers use to amusing effect. When the rare gem for casting the spell breaks, conjuring only the bottom half of their father, the metaphor becomes all too clear. Admittedly, it is a creatively touching way for expressing how the boys have been living on vague memories and clinging to them, even defining them. 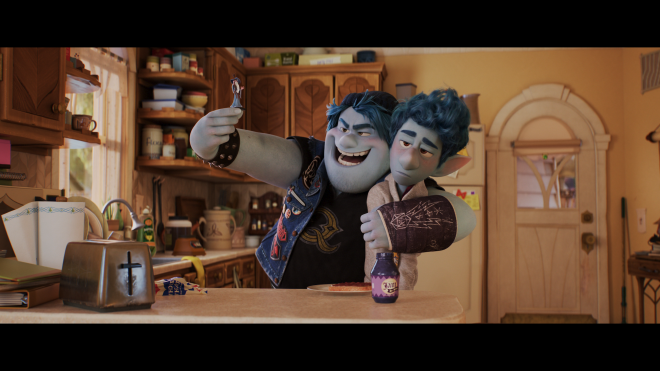 On the other hand, as they climb into Barley's beat-up old van, which he affectionately named "Guinevere," the story suddenly becomes a fantasy road movie about a pair of brothers and how they coped with the loss and absence of their father differently. Perhaps unsurprisingly, sixteen-year-old Ian lacks confidence, feels insecure and is awkwardly timid inviting others to his birthday party. Of more interest, however, is Barley, a history buff who loves playing fantasy role-playing games. The nineteen-year-old brother is a frustrating embarrassment to Ian and understood as the jobless family screw-up who lives in his mother's (Julia Louis-Dreyfus) basement. His journey in all this is, honestly, the more heartfelt and meaningful as it caught me off-guard whereas Ian's mission is like raven statues pointing from a vast distance in the direction of where it's all going to end, especially after his list of goals with dad.

Thankfully, there is a great deal more to enjoy and admire in Onward than what the above would imply. Visually imaginative and continuously mesmerizing, the film easily ranks high on the list of Pixar's most beautifully animated features though Wall-E, Ratatouille and Toy Story 4 remain the studio's best. And there is something to be said about the characters living at a time when magic and wonder have been ostensibly replaced by technology, handheld gadgets and a host of other modern conveniences — a sly, understated commentary on our world, our disconnect with history and the value of learning from the past and confronting death through the lens of magic and fantasy even though the subject matter was arguably handled better in Up and Coco, making this mid-tier Pixar. Nevertheless, there's plenty of heart and laughs to make Onward a good choice for a family movie night.

Walt Disney Studios Home Entertainment brings Onward to 4K Ultra HD Blu-ray as a three-disc combo pack with a flyer for a Disney Digital Copy. When redeeming said code via RedeemDigitalMovie.com or MoviesAnywhere, users have access to the 4K digital version in Dolby Vision HDR with Dolby Atmos audio. The dual-layered UHD66 disc sits comfortably opposite a Region Free, BD50 disc that's atop another BD25 disc containing all the bonus material. All three are housed inside a black, eco-vortex case. At startup, viewers are taken to a static screen where owners can choose between the start of the movie or look through the menu.

The urban-fantasy road movie casts its whimsical spell on Ultra HD with a magically gorgeous HEVC H.265 encode that immediately bursts with a kaleidoscope of colors from the opening moments. Much of the palette favors practically the entire spectrum of blues, from the deep indigo of the night sky and the electrifying arctic glow of the dad's missing half to the darker shades in the elf hair and the fuller teals of their skin. Action sequences, especially those involving magic, animate the screen with a vibrant array of pastels, beaming with sumptuous purples and violets, radiating with lavish magentas and luminous pinks. One of the more impressive sights is the close-ups on the faces of elves where their teal skin smoothly blends to soft blushing pinks around the cheekbones and the tips of their ears.

Likely coming from a 2K digital source, the freshly-minted 4K transfer also boasts a brighter and more spirited contrast balance, showing more intense whites throughout while also showing slightly sharper lines and objects of the Lightfoot home and the city of New Mushroomton. The HDR10 presentation further displays crisper, tighter highlights while revealing better detailing within the hottest spots, such as in the dazzling glow of Ian's staff, the tiny sparkles from sprites, or the blooming red orb of the golem. On the other end of the grayscale, the 2160p video showers every scene with significantly richer, silkier blacks. Likewise, shadows have an inkier, velvetier sheen that penetrates deep in the screen without ruining the finer background details of Barley's van and providing the 2.39:1 image with an occasionally stunning three-dimensional quality.

Overall, the UHD edition offers a striking upgrade and a feast for the eyes. (Video Rating: 94/100)

The latest Pixar feature crashes into home theaters with an excellent and spirited Dolby Atmos soundtrack that offers a very slight step-up over its DTS-HD MA counterpart, but not by a significant margin.

As is typical Disney fashion, this mythical creature has been tamed somewhat, requiring to boost the overall volume a few decibels to fully appreciate the small improvements. For one, imaging feels wider and more spacious with better balance and movement between the three front channels, and some of that background activity very subtly bounces into the top heights, creating a highly-engaging, half-dome soundstage. Like its lossless brethren, the surrounds and heights are not employed often and frankly, fail to generate an effective immersive experience, but on a few occasions, some atmospheric effects move into the sides and overhead, nicely expanding the soundfield during certain sequences.

More impressive is the musical score by sibling duo Mychael & Jeff Danna. With the extra breathing room, their music benefits most, exhibiting detailed clarity in the mid-range and outstanding separation in the orchestration while also spreading better into the sides and heights. Meanwhile, the vocals are regularly precise and very well-prioritized above the enchanting mayhem. The low-end could be a tad more aggressive given the visuals, but a punchy, fairly potent mid-bass is enough at providing a palpable weight to the action, making the animated flick a fun listen at home. (Dolby Atmos Audio Rating: 84/100)

All supplemental material is contained in the accompanying pair of Blu-ray discs.

Demonstrating a clear mastery of their craft, Pixar Studios delivers another heartwarming, tear-jerking winner in Onward. Starring Tom Holland, Chris Pratt, Julia Louis-Dreyfus and Octavia Spencer, the fantasy adventure film about two brothers on a quest to spend a day with their deceased father offer a charming tale with plenty of visual delights, but it doesn't quite cast that magical spell expected of the usually reliable studio. The CG-animated flick crashes into Ultra HD with a strikingly gorgeous 4K HDR10 presentation and an excellent Dolby Atmos soundtrack, offering a welcomed step-up over its Blu-ray counterpart. While featuring the same set of bonus material, the UHD edition nonetheless makes for a recommended watch on family movie night.