Celebrating the lush, vibrant tapestry of life, Pixar Studios, once again, hits audiences right in the feels with Coco, the imaginative tale of a young aspiring musician's journey through the Land of the Dead and learning to cherish our loved ones. The animated film crosses over to 4K Ultra HD with a lovely HDR10 presentation and an excellent Dolby Atmos track, making the overall three-disc package Recommended for the family.

Pixar has been pushing the boundaries of imagination since their inception, from visiting the world of toys, monsters, and superheroes to journeying the depths of the ocean, the mind of adolescence, the far reaches of outer space and alternate realities. With little left to explore, the computer-animation studio keeps things more grounded and familiar in Coco, taking audiences on a tour of Mexico and its rich culture while simultaneously traveling to the Land of the Dead. Marking their 19th feature-length film, the theme of confronting and dealing with death is, of course, nothing new to anyone versed with the vast majority of Walt Disney-owned content. However, what makes this introduction to a traditional Mexican holiday and the festivities surrounding it particularly special is a story celebrating the dead and loved ones who have passed away. Whereas previous Pixar movies cope with the pain of saying goodbye, this tale tackles the idea of remembrance. Rather than tearful farewells, we welcome their memories into our home and never forget.

Amid this cloak of memorials and reminiscences, we follow young adolescent Miguel Rivera (Anthony Gonzalez) preferring his dream of becoming a famous musician instead of joining the shoemaking family business. Little Miguel's ordinary world is always looking to the future with little care for the past, taking inspiration from his hero Ernesto de la Cruz (Benjamin Bratt), an iconic folk singer and actor that continues to be celebrated and cherished. His family, on the other hand, seems stuck in the past without a concern for the future. Or better yet, they live with the pain of some bygone event that strictly forbade music for future generations. And Abuelita Elena (Renée Victor) strictly enforces this ban, even going so far as using her chancla (leather slipper) as a deadly weapon to repel musicians from her grandson. The tension of following family tradition or pursuing one's personal goals is a universally relatable subject that's interestingly met with Miguel learning a lesson rather than the familiar Disney formula where the hero achieves their objective. 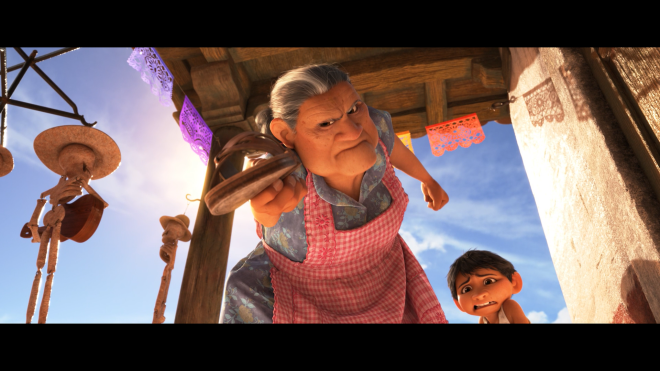 Within the Pixar canon, such themes are arguably more common, where the central protagonist learns selfish pursuits are not always for the better. But this is precisely what makes the studio extraordinary, along with the fact that they manage to captivate the youngest in the audience while charming older folks, building towards a conclusion that should leave even the hard-hearted blubbering in tears. And this journey begins when Miguel selfishly steals from the dead — or more specifically, de la Cruz's legendary guitar — and is punished with a trip to the Land of the Dead, which is more a tapestry of passionate, enthusiastic activity showered in a kaleidoscope of vividly flamboyant colors and energy than a gloomy world where life ends. Here, our would-be hero makes an ally in Héctor (Gael García Bernal), a charming down-and-out grifter who serves as both a mentoring guide through the afterlife and the key to Miguel's primary aim of returning home without sacrificing his dreams of playing music. And as expected, things are not as they first appear.

Much as they did in The Good Dinosaur and Inside Out, Pixar surprises moviegoers with an unexpectedly poignant tale that will pluck at the heartstrings like a talented guitarist soothing the ears of a troubled mind. And Héctor's "Remember Me" tune provides the central core of that plot's deeply emotional message of never forgetting our ancestors, those who have shaped and influenced future generations. Be it positive or negative, they left their mark on the family, and as Mamá Imelda (Alanna Ubach), the matriarch where the story originally began, essentially puts it, we don't have to forgive them but we also shouldn't forget them. Along the way, the exceptionally beautiful film is showered with several hilarious Easter eggs and cultural references, from the obvious, such as Frida Kahlo making a spot-on appearance, to the more obscure, like the de la Cruz characters being an amalgamation of Mexican icons Pedro Infante and Jorge Negrete. With other blink-and-you'll-miss-it moments — Was that Cantinflas partying with de la Cruz? — Coco is an absolute joy to be cherished as another Pixar classic if not highly ranked among their best achievements.

Walt Disney Studios Home Entertainment brings Coco to Ultra HD Blu-ray as a three-disc combo pack with a flyer for a Disney Digital Copy. When redeeming said code via RedeemDigitalMovie.com, viewers can enjoy the HD version through the MoviesAnywhere app. Via VUDU, it seems like the 4K digital version with Dolby Vision and Dolby Atmos is also available. But as past experience has shown, this will vary between users.

The physical copy is a dual-layered UHD66 disc that sits comfortably atop a BD25 disc with all the bonus material, and a Region Free, BD50 disc is on the opposing panel. All three discs are housed inside a black, eco-elite case with a lightly embossed, glossy slipcover. At startup, viewers are taken directly to the movie.

Fans can remember the animated feature on 4K Ultra HD thanks to a lovely and vibrant HEVC H.265 encode that'll hypnotize viewers right from the opening moments. Definition and clarity is a welcomed step up, exposing the individual threading in the traditional clothing of the women or the smallest imperfection in the wooden houses in the Land of the Dead. The separate rocks of the cobblestone roads and the cracks in the buildings of the marketplace are tad more distinct and easy to make out. The same goes for the individual hairs in both the living and the wigs worn by the dead while viewers can better appreciate the intricate, elaborate silver threading of the mariachi suits. The only issues holding this 4K presentation from a higher score are the same instances of aliasing in several shots, which are made all the more apparent here, from the edges of candles burning in the background or the lit edges of buildings and stairs during wide shots to the guitar strings in a couple moments. But this is also an issue present on the Blu-ray.

Overall, contrast isn't really any brighter or more dramatic than its HD SDR counterpart, but whites remain crisp and brilliant, if not also a bit tighter and narrow in some areas. Interestingly, the makeup worn by Miguel is clearly of a different tone to the bones of the dead, which now come with a slightly yellowish, aged tinge to make them more realistic while still revealing the tiniest scratch, blemish, and pockmark. Specular highlights are more impressive and appreciable within the flames of candles and lanterns where the glow of the fire is better constricted, allowing for better detailing within the brightest areas. De la Cruz's famous guitar shows a more realistic sparkle when the light hits it just right, while the cracks in the lacquer finish are also clearer. Black levels are significantly inkier and richer in the hair of characters and some of the outfits, and much of the picture comes with luxurious midnight shadows provide a lifelike three-dimensional feel that never take away from the tiniest detail within the darkest, poorly-lit moments.

Arguably, the best aspect of the 2160p video is definitely the improved color palette, but again, like its SDR counterpart, the differences are not quite as dramatic as one would hope. Without a doubt, the 2.39:1 image is continuously showered with a splendid array of sumptuous colors, and primaries appear a tad fuller and abundant, especially in the reds like Miguel's sweater or the blues in the sky. Miguel's journey through the Land of the Dead is still glowing with energetic purples, soft pinks and lots of resplendent magentas, but there's a more fervent tangerine bloom in the marigold petals. The same goes for when characters are in the process of the Final Death as they suddenly burst into a marigold orange radiance before fading into a golden hue. On the Blu-ray, it was just a bright yellow burn. Also, the neon colors radiating from the alebrijes, especially Mamá Imelda's Pepita, come with a more flamboyant incandescence that are simply hypnotic to watch. In the end, the HDR10 presentation is a dazzling, mesmerizing splendor for the family.

The festivities continue with an awesome Dolby Atmos soundtrack that'll surely have viewers cheering and singing along, but owners will want to be sure to select their preferred track in the pop-up menu because the disc automatically defaults to the DTS-HD MA 5.1 configuration. There is also the choice for a DTS-HD 7.1 track, as well. However, the spatial audio option is not a leaps-and-bounds improvement over the other two choices. Granted, a few atmospherics travel into the overheads with flawless movement across the room, such as when Pepita soars through the air and the animal's roar echoes all around. But such moments are far and few in between, leaving a great deal to be desired in the space above the listener. Instead, as mentioned on the Blu-ray, the surrounds are more active and continuously employed with the chatter of the marketplace or the dead walking the streets of the afterlife. The room is drowned in the cheers, applause and eventually boos of the crowd, displaying excellent directionality and fully immersing the viewer in the middle of the mass while action sequences come with superb panning effects.

A broad and welcoming soundstage is the real showstopper, as background action fills both sides of the screen with convincing off-screen activity and the occasional splatter of noise spreading into the front heights. The lossless mix exhibits outstanding clarity and detailing in the mid-range, revealing exceptional distinction and separation in the upper frequencies and during the loudest sequences. The music and song selections benefit from the jump to 3D audio the most, delivering plenty of warmth and fidelity as every note reverberates to the sides and overheads effectively. Added to that, the music and action enjoy a hearty and responsive low-end that delivers a punchy, ample bass without being too aggressive or calling attention to itself, but simply supplying the visuals with a great sense of presence and space. Amid the fantastical festivities, vocals always maintain priority and are always intelligible, providing each line and inflection with an emotional depth that will bring tears to anyone's eyes.

All the same supplements are ported over from its other day-and-date home video release, which can be read in more detail in our review of the standard Blu-ray HERE.

For their 19th feature-length film, Pixar Studios' Coco takes audiences on a tour of the Mexican holiday of Day of the Dead, and the theme of remembering loved ones. Following a young aspiring musician's journey through the Land of the Dead, the CG animated film is a lush, vibrant tapestry of a rich cultural history celebrating life and those who have shaped our lives. The Ultra HD brings the afterlife to . . . well, life with a beautiful, vibrantly colorful 4K presentation and an awesome Dolby Atmos soundtrack. With a healthy, informative assortment of supplements, the three-disc package is recommended for the whole family.