Sonic the Hedgehog zooms its way to 4K UHD Disc as the blue-haired hero sets up shop on Montana, befriends a couple of humans, and tries to survive the destruction of Dr. Robotnik in this videogame adaptation for the big screen. It's one of the best video game movies to date and is full of charisma and fun. The 2160p transfer with Dolby Vision is excellent and the Dolby Atmos track is wonderful. There are several short bonus features to boot that is worth the time. Recommended!


We Also Reviewed Sonic the Hedgehog on 1080p Blu-ray 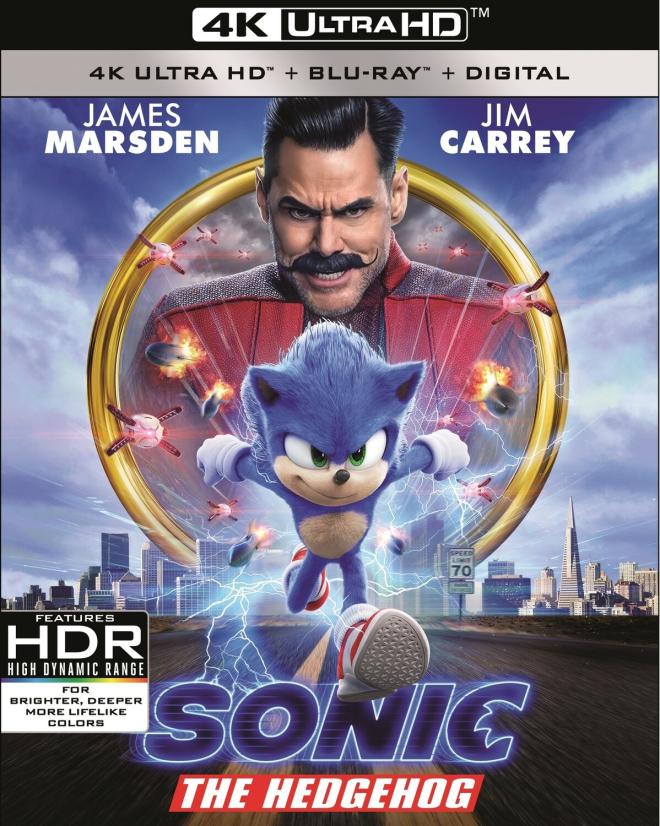 Maverick isn't the only one who feels the need for speed. The Sega pop-culture videogame star Sonic also must feed that need and has done so in his new live-action feature film Sonic The Hedgehog. Sonic debuted in the early 1990s where Nintendo and Sega were the two big rival companies pumping out their own unique video games. As time went on, both game consoles were more or less phased out for other systems, but that didn't stop Hollywood from dipping their hand into the movie market with several video game characters. From Super Mario Bros. to Assassin's Creed, video game movie adaptations have had a less than stellar reputation. With Sonic The Hedgehog though, there's enough passion, fun, and charm for a highly entertaining movie despite a canned and predictable storyline.

Those not familiar with Sonic the Hedgehog or its many iterations of the video games need not fear as the opening sequence explains just what Sonic is - a blue hedgehog alien with super-fast powers who lives on a planet far, far from Earth. After a battle with some evil mammals on his own planet, Sonic's teacher and mentor Longclaw the Owl saves Sonic from certain death, gives him a bag of golden rings that form portals to other planets and sends him to Earth, specifically Montana.

Sonic stays out of sight from everyone but grows to like over the years a happy couple named Tom (James Marsden) and his wife Maddie (Tika Sumpter), even though they have no idea he exists. Sonic (voiced by Ben Schwartz), just wants a friend and is suffering from a bout of loneliness. Trying to ease his sanity, Sonic plays a game of baseball by himself in all positions and pulls a Superman-like feat and runs incredibly fast over long distances that leads to part of the United States having a major blackout.

The government gets involved and thinks a scientist named Dr. Robotnik (Jim Carrey) has all the answers as to what caused this with his fancy trucks and drones. Turns out, the mad scientist and his large mustache only wants the power of Sonic for world domination and will stop at nothing to get it. Cue the cat and mouse chase, Sonic gaining a few friends, and for Jim Carrey to reprise his over-the-top roles from the 1990s as Dr. Robotnik in this delightful film.

While the plot has been done many times over before, there's a certain freshness to this film. This might be the case in not taking itself too seriously like many other video game films have tried to in the past. Not only that, but there also isn't an overly long and drawn-out origin story or explanation of where Sonic came from. On the contrary, much like his own speed, everything is explained in a fun and remarkably quick way and jumps right into the story.

Performances are solid with Marsden playing the likable hero while Schwartz provides enough pizazz and charisma to the blue-haired critter. Jim Carrey is the shining star though, as he conjures up those old, first film roles that made him famous in that whacky animated way. It looks like he had a blast jumping into that mode again. The action sequences are shot very well and even wink at some former superheroes of recent.

The visual effects are solid and look great in the real world here. Sonic himself had a makeover midway through filming due to some harsh criticism but now looks like the Sonic fans have come to love from decades ago. I'm sure there is more Hedgehog on the way as the finale and credit sequence alludes, which wouldn't be the worst thing in movies.

Sonic The Hedgehog zips its way to 4K UHD Disc + Blu-ray +Digtial Copy from Paramount. The discs are housed in a hard, black, plastic case with an insert for the digital code. The artwork of Sonic and Dr. Robotnik is posted on the case as well as the cardboard sleeve. Additionally, there is a mini-comic book that comes with this 4K version called The Adventures of Sonic and Donut Lord. The artwork is less than stellar as it is 8-bit artwork. 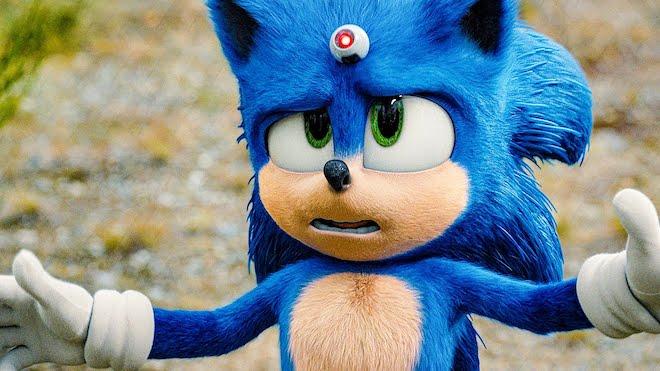 Sonic the Hedgehog runs to 4K Disc with a glorious 2160p transfer with Dolby Vision that has sharp detail and a fantastic color palette.

This 4K video is a good upgrade from the 1080p Blu-ray version for a few reasons. One being the Dolby Vision color enhancement. The varying shades of blue on Sonic's fur and quills are more pronounced nuanced in every type of lighting. From the bright sunny exteriors to the nighttime shots in the wild, all look great. Even the night baseball games with stadium lighting showcase Sonic's blue hues perfectly. This mixes well with the rural green town in Montana and its brown tree trunks and houses. Dr. Robotnik enters the scene with pitch-black SUVs and trucks along with his red lasered drones that pop off-screen. It's a colorful looking image that never bleeds or becomes murky. Black levels are consistently deep and the skin tones are always natural.

The detail is vivid, even in the heavier CGI sequences with battle drones and Sonic running at full speed. The slow-motion sequences reveal all of the intricate details of spilled drinks and food exploding everywhere, as well as, electrical sparks and hair blowing in slow motion. It's quite the marvel. Closeups also showcase individual hairs on the human's faces as well as Sonics, along with eyeball detailing, and Jim Carrey's robust stache. Wider shots have depth and reveal the structural detail of on set locations and visual effects quite nicely. Lastly, there are no major problems with any banding, aliasing, or video noise. 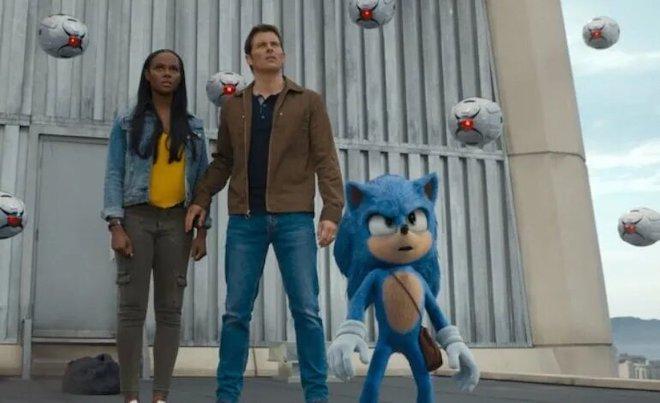 Sonic delivers a wonderful Dolby Atmos track that provides a ton of great sound elements from start to finish. The sound effects are lively and energetic right from the start as Sonic outruns Dr. Robotnik in the big city with tons of audio effects that resemble a zoom or zip. What is truly astonishing are the effects of both Sonic and the human perspective in the film. For instance, the scene in the bar, Sonic runs lightning-fast and can hear detailed audio noises in slow motion and real-time as the human perspective will hear the quick zoom or zip in the background. There are several moments with these types of sounds in the film and they all work perfectly.

Other ambient noises of people talking, yelling, or the Montana weather can. be heard discreetly in the surround and rear channels that are perfectly balanced. The bass kicks into high gear during the big chase sequences with Dr. Robotnik as vehicles and drones try to destroy Sonic and other elements of certain cities. The height speakers offer up of the high flying drone noises along with some of Sonic's speed bursts that add a good addition to the soundscape. The music always adds to the charm factor and suspense of the action scenes without drowning out any other aspect. Lastly, the dialogue is clean and clear with some good directionality, and free of any audio problems. 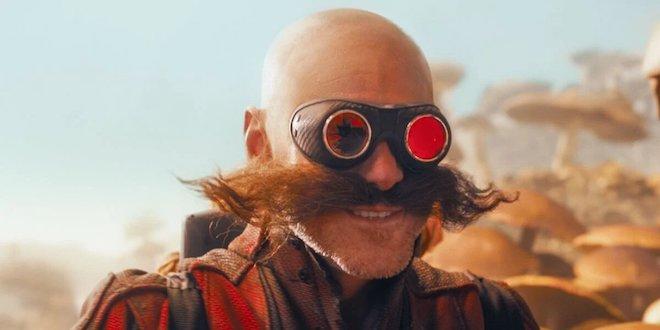 There are about 41 minutes of bonus material included here, along with an audio commentary track. None of it is long-form or particularly informative, but it's fun none-the-less with some quick explanations on the origins of Sonic. None of the extras are included on the 4K UHD Disc. All extras are located on the Blu-ray version. 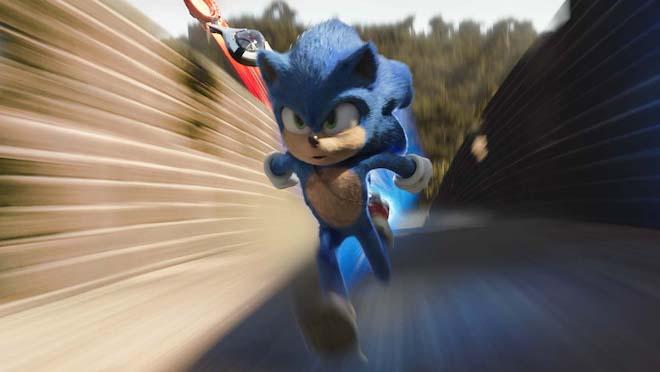 Sonic the Hedgehog does nothing new for video game movies or stories, but it's captivating enough and endearing while never trying to be something it's not. It's practical and reasonable for a movie of this caliber and is fun for the whole family. The video and audio presentations are both top-notch and the extras are quick and enjoyable. Recommended!