Through a revolutionary technology that unlocks his genetic memories, Callum Lynch (Michael Fassbender) experiences the adventures of his ancestor, Aguilar, in 15th Century Spain. Callum discovers he is descended from a mysterious secret society, the Assassins, and amasses incredible knowledge and skills to take on the oppressive and powerful Templar organization in the present day.

For gamers, and even those who simply enjoy the occasional videogame-based movie, Assassin's Creed is sadly not the godsend some were anxiously awaiting. It's not exactly a terrible movie, but it's not great either, littered with several head-scratching details in an aloof and rather mediocre plot that aspires far beyond what the filmmakers are capable of achieving. To put it in another perspective, some might argue this action-adventure film based on the popular Ubisoft series is the best video game adaptation, but seeing as how we have yet to actually see a good video game movie, that's not exactly high praise for a high-concept, high-budgeted production. It would be like pointing out the pretty flower growing atop a dunghill. Sure, it's a sight to behold from a distance — a feast for the imagination, perhaps — but trying to pluck it is more work than it's worth and probably smells just as bad. I'm sure I have better things to do than analyzing something that requires little more than to comment, "Oh, fancy that pretty flower growing on a dunghill."

I know it sounds as though I'm coming down harshly on the movie while also weirdly praising it in a backhanded sort of way, and the reason for that it really simple. It's actually a well-made production that makes for a visually impressive one-time watch. Director Justin Kurzel, who made a name for himself with Snowtown and Macbeth, which also starred the highly-talented Michael Fassbender, brings his talents for composition to an adventure tale with several spectacular shots that energize various action sequences and sweeping camera movements over parkour stuntwork that often mesmerizes. With cinematographer Adam Arkapaw, the whole fantasy of traveling back in time through genetic memories, thanks to some mechanical-arm-like contraption called the "Animus," is beautiful to behold. Production designers who brought Late Medieval Spain to life should also be commended while Jed Kurzel's score can serve a variety of scenes with people leaping through the air. Altogether, the film rightfully earns some acclaim for its technical achievements. 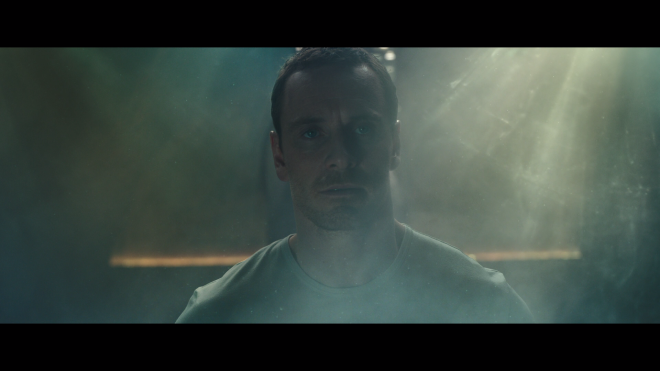 However, having watched it a third time, the story is ultimately boring, more likely to cause drowsiness than even the slightest bit of enthusiasm. Even during the first watch, I kept battling sleep paralysis while Fassbender, as convicted murderer Callum, enters a sleep paralysis machine created by Marion Cotillard's Sofia, a scientist with the lofty goal of curing our hereditary tendency towards violence, which should immediately sound the alarm bells. However, she works for father, Alan Rikkin (a dour, sinister-looking Jeremy Irons), and his Abstergo Foundation, which is itself a front for modern-day Templars, which is secretly run by the even more shadowy Charlotte Rampling. It all sounds overly complicated — and it is! — nearing cartoonish levels of silliness while failing to earn sympathies for Callum's situation and predictable journey into hero status. There isn't even a redeemable quality to the character — a bland, two-dimensional pawn in his own story — or a sense of him searching absolution for his criminal past.

But the filmmakers have a backup plan that overlooks this with a byzantine plot about sending the descendants of a secret society of assassins into the memories of their ancestors. Apparently costing upwards of billions of dollars each year, all for the sake of finding the hidden location of a device called the "Apple," which contains the genetic code for removing free will.

Philosophy has never been a strong feature of video game stories, and Assassin's Creed clearly demonstrates this gratified surface level appreciation for the most abstract ponderings into our existence. Neither the filmmakers nor the characters ever attempt to explain how the Animus machine works, even in the most haphazard, rudimentary terms. Memories carried through the genes? There's potential for fascinating explorations concerning free will, which ironically the machine requires for it to function optimally, and Cartesian dualism. But the filmmakers of this adaptation don't ever commit to transcending genre trappings, taking a leap of faith moviegoers won't be bored by the pretty flower.

20th Century Fox Home Entertainment brings Assassin's Creed to Ultra HD Blu-ray as a two-disc combo pack with a flyer for a Digital HD Copy. At the moment, we are unable to verify if the correct size of the content, but the dual-layered UHD66 disc sits comfortably opposite a Region A locked, BD50 disc inside a black, eco-cutout case with a glossy slipcover. At startup, the UHD goes straight to a main menu screen with full-motion clips and music.

The "Assassins" take a leap of faith on Ultra HD with a strong and often beautiful HEVC H.265 encode in HDR10 that bursts onto the screen with a comfortably bright and well-balanced contrast.

Whites sparkle and radiate with brilliance, such as when the Animus is in use or when Callum travels back to the 1490s, while specular highlights in fluffy clouds in the sky and various metallic objects dazzle with a true-to-life glow. The same vibrant array of colors exudes with gorgeous intensity, bathing various scenes in a wide range of secondary pastel hues, much of which is thanks to the stylized teal-orange cinematography. The best scenes are the exterior shots of the sun's warm rays showing a wonderful mix of yellow, orange and red with subtle hints of purplish blue in the distance. Primaries, on the other hand, are slightly subdued, but remain accurately rendered and occasionally shine in a few scenes with energy.

The movie was shot digitally on a combination of Alexa 65, Arri Alexa XT and Red Weapon Dragon cameras with a few shot in GoPro Hero3 with resolutions ranging from standard HD to 6K, and the results actually show. On the whole, the digital-to-digital transfer offers a nice uptick over its 1080p counterpart with slightly sharper details and a few more visibly distinct lines in the costumes and the stone architecture of medieval Spain. Facial complexions are more revealing and lifelike here, exposing every negligible wrinkle, pore and blemish, while the tiniest stubble on Mr. Fassbender's face is pointed and crisp. However, there are many scenes that are noticeably blurrier and softer than others, most of which are related to the sweeping aerial shots, so it's not clear if the softness is intentional or due to the camera being used at the time.

Of more interest is the heavily stylized cinematography looking grittier with a more film-like appeal. In this 4K presentation, the teal-orange photography appears more natural and makes the 2.40:1 image a bit more attractive. Brightness levels also improve slightly with a tad richer and truer blacks for the most part, but once again, the finer shadow details tend to get lost in several poorly-lit sequences while shadows and some clothing simple look like black blobs.

Still, the video game adaptation looks great on Ultra HD, but despite being the best way to watch the movie, it sadly is not a massive upgrade over its Blu-ray counterpart.

The action-adventure adaptation also debuts with a fantastic and satisfying Dolby Atmos soundtrack, which is exclusive to the UHD version and defaults to Dolby TrueHD 7.1 for those not yet equipped.

As with its DTS-HD counterpart, much of the action frequently take place in the sides and rears with random noises periodically employing the extra four channels. The design is layered with subtle atmospherics discreetly moving all around and surrounding the listener. Occasionally, these same noises lightly move into the ceiling speakers, nicely expanding into a dome-like soundfield. Inside the Abstergo Foundation, prisoners chatting in the distance echo into the space above and sometimes, the building sounds strangely silent where we can almost hear the breeze lightly blowing through the concrete hallways or the sound of fluorescent bulbs hum overhead. The musical score does most of the work by bleeding all around and enveloping viewers. When traveling back to the 1490s, action sequences are layered with the commotion of crowded streets as characters parkour across buildings while arrows fly above and across the room with superb directionality.

Meanwhile, the front soundstage feels a tad broader and more spacious where various background activity fluidly pans across the screen and into the front-height channels. Imaging exhibits excellent fidelity and warmth even during the most tumultuous action-packed sequences. The score displays distinct clarity and separation in the orchestration while vocals remain intelligible and precise amid the loudest, most chaotic moments. A robust, palpable low-end provides the design with a powerful presence and a few wall-rattling bits, though it never really digs into ultra-low depths.

In the end, and as with the video, this object-based format doesn't offer a significant leap over its multi-channel counterpart, and fans will be satisfied with either choice.

All supplemental material are available only on the Blu-ray disc.

Take the Pledge (HD, 41 min): An assortment of BTS featurettes with cast & crew interviews talking about various aspects of the production, the plot and performances.

Deleted Scenes Conversation with Justin Kurzel & Justin Tellefson (HD, 22 min): The director and editor talk over excised footage and the reasoning behind their removal.

Deleted Scenes (HD, 16 min): Can be watched individually or in order:

"Out of the Shadows"

Despite director Justin Kurzel and cinematographer Adam Arkapaw making arguably one of the best looking videogame-based adaptations, Assassin's Creed, unfortunately, is not the godsend some were anxiously awaiting for. Starring Michael Fassbender, Marion Cotillard and Jeremy Irons, the story is needlessly complicated and ultimately boring with little soul attached to the amazing visuals.

The Ultra HD Blu-ray arrives with strong video, an excellent Dolby Atmos track, and an enjoyable set supplements, but it's not a huge upgrade over the Blu-ray. In the end, this UHD package is for fans only.

Sale Price 17.99
List Price 29.99
Buy Now
3rd Party 5.73
In Stock.
See what people are saying about this story or others
See Comments in Forum
Previous Next
Pre-Orders
Tomorrow's latest releases