Sam Mendes delivers the personal intensity of the great war with the stunning 1917. With a break-neck pace, the film is pitch-perfect action suspense beautifully captured by Roger Deakins. It may not reinvent the War Film genre, but it's a harrowing addition that stands alongside the best. Universal Studios delivers a truly first-rate reference-quality 4K UHD Blu-ray experience with a gorgeous Dolby Vision transfer and an endlessly intense and immersive Atmos audio mix. Bonus features aren't half bad either but a full court of behind the scenes material would have been very welcome. ALl the same, if you love war films, incredibly well-shot films, or need a new demo disc for your rig - 1917 is a Must Own on 4K UHD.

The mission is simple. Lance Corporal Blake (Dean-Charles Chapman) and Lance Corporal Schofield (George MacKay) are to swiftly cross enemy lines to prevent a charge towards German lines that will result in the deaths of thousands. Blake's brother among them. Blake and Schofield will have to rely on their experience and training as soldiers as well as each other if they hope to reach the regiment and stop a catastrophe from happening. 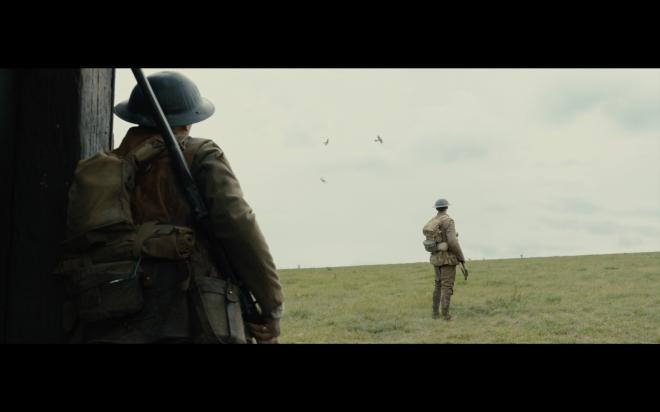 To be truthful, I didn't fall in love with 1917 until my second viewing. After the first teaser trailers came out I was so excited I didn't want to see any more previews or read anything about the movie. I wanted to go in as cold as I possibly could. Then people started talking. I did my best to avoid overhearing conversations but then as soon as someone mentioned that it was shot to look like a near-single continuous take - it's all I could think about once I was sitting in front of that massive IMAX screen.

Roger Deakins is second to none in his field. I knew 1917 would be a beautiful movie and it would be a unique experience, but hearing that it was shot to look the way it was I was too aware of it. Like hearing about a magician's trick before he's performed it, I was looking for the cuts and edits. I was distracted. I still enjoyed it quite a bit, but I wasn't enthralled with it as much as others.

That changed when I finally got my hands on this glorious 4K UHD Blu-ray. Maybe it was something about being able to control the viewing environment that helped me just focus on the story and the film itself, rather than trying to figure out the trick. But I now love 1917. I'd previously pinned Knives Out as my favorite movie of the year with Parasite a deserving Best Picture winner. Now I'm not sure how I feel in that order. Knives was certainly the most fun I had at the movies all of 2019, but the year as a whole was populated with incredible cinematic achievements deserving of any number of accolades.

Simplicity is what makes 1917 work. Two men on a mission. With Sam Mendes' deft direction, Deakins' incredible eye, and two impressive performances from Dean-Charles Chapman and George MacKay - with a host of famous cameos - that makes 1917 an intense often emotional rollercoaster war film. It's a hell of a film to experience and it demands to be seen on the largest screen you can find.

1917 was made to be seen on the big screen. It's a large canvas movie with incredible photography and imagery. This native 4K 2160p 2.39:1 transfer with Dolby Vision HDR almost does this film picture-perfect justice. My only single gripe is that Universal didn't opt to replicate the film's 1.90:1 IMAX presentation which was just jaw-dropping to see on the big screen. With that caveat set aside - this presentation is perfection. Everything from facial features, costume, and scenery details to colors, black levels, and contrast - everything benefits from the 4K Dolby Vision experience.

Again, this transfer was sourced from a 4K DI so it's as close to perfect as it gets. After zipping through this disc and the included 1080p Blu-ray there are numerous improvements, but I was most impressed with low light details. From the opening mission briefing to the mid-point segue through the bombed-out city lit seemingly only by firelight - I was really impressed to see clear facial and clothing details. In those moments the gradience from bright orange/yellow light to deep inky black was stunning allowing near-invisible objects to hide in the shadows and just barely be seen.

The Dolby Vision HDR grade does what it should do by not radically altering the appearance but offer those sort of improvements. Primaries pop off screen, red stands out, but the bright blue sky adds to the spectrum. Whites are clean and crisp without blooming and in the darkest of scenes, there's never any unsightly crush. Throughout there's always an amazing sense of three-dimensional depth to the image. It's Roger Deakins, people - there's no way 1917 wasn't going to be a stunning release on 4K - on disc.

Because I help family stay entertained through my collection I often redeem my digital slips so out of curiosity I took a look at the 4K UHD stream and as expected, it looks nice but doesn't hold a candle to the disc. Speed dependency and streaming bitrate caps punch this one in the gut - namely in the dark scenes with low orange light. The shadows are chunky without any smooth gradience. There are a few other inconsistencies in detail clarity but how well it handles low light is the key criticism. If you were hoping on the digital 4K being "good enough" you're missing out on a beautiful disc.

Both the 4K UHD Blu-ray and the 1080p SDR Blu-ray release enjoy an Atmos audio mix that is an auditory marvel. For a war film, it's not all guns and explosions - most of the film is actually very quiet as two men make their way through trenches, bunkers, across rivers - it's not about the action sound effect you're expecting to hear, it's about the subtleties you don't expect to stand out.

This mix offers up pin-point perfect vertical, side, and rear sound effect placement. The vertical channels give plenty of space through open fields but then come crushing in when our heroes enter an abandoned enemy bunker. Likewise, when soldiers leave the trenches and the bombs start falling around them the channel movement and impact provide this beautiful cacophony of imaging and LFE. That airplane sequence is a highlight moment.

For the standard marks of dialog clarity, scoring, and surround effects - everything is an A+ effort. The mix is perfection from start to finish. You never once lose a line of dialog against a background of Thomas Newman's exceptional score and warfare. Levels are spot on without any need to ever adjust things. I simply say turn up the volume and let the movie suck you in.

1917 offers up a solid assortment of worthwhile bonus features. The two audio commentaries with Sam Mendes and Roger Deakins are the main highlights of this package that are must listens. The rest of the bonus features offer some insight into the production but aren't really much more than the typical EPK talking head pieces. They're still worth digging through but the commentaries are the true standouts.

In a year packed with great films, 1917 was one of the top contenders. I didn't love it the first time I saw it simply because I was playing a stupid game of "spot the edit." Upon second viewing with that dumbass part of my brain turned off - I fell in love with this movie quickly devouring it several times in just a few days to soak it all in and enjoy the excellent commentary tracks. The War Film genre has many impressive entries and 1917 charged the field as a shining example of precision storytelling, deft directing, and incredible visual style.

Universal Studios delivers the 4K UHD Blu-ray to end all 4K UHD Bly-rays - not really but this is a damn beautiful disc. Featuring a stunning native 4K transfer with Dolby Vision HDR, a fully immersive Dolby Atmos audio mix, and a solid set of bonus features, there's nothing much more to say than to call 1917 your next reference-quality demo disc. Quite simply - it's a Must Own