A deed most foul - Murder! With a family of suspects, it requires Daniel Craig as a world-famous detective to crack the case in Rian Johnson's superb Knives Out. With an all-star cast including Ana De Armas, Chris Evans, and Jamie Lee Curtis, this film is a true ode to the great works of Agatha Christie bringing wry humor and delightful suspense to an endlessly entertaining murder mystery. Lionsgate pulls out the stops delivering a beautiful 4K UHD Blu-ray to the crime scene featuring a gorgeous Dolby Vision HDR transfer, a crackling Atmos mix, and an amazing set of bonus features to match. One of the most entertaining movies of 2019 gets a 4K UHD Blu-ray release that's easy to call a Must Own - especially if you're a fan of the genre!

We also reviewed this film on Blu-ray

Under normal circumstances, I would be giving you dear readers (or deer readers, I'm not biased towards animals) a brief recap of the plot of Rian Johnson's Knives Out. But then these are not normal circumstances. As a fan of murder mysteries - in particular, Agatha Christie mysteries, I don't want to tell anyone a damn thing about this movie beyond "just go see it! Now!" I was writing up a version of this review with a little plot lowdown and even then I felt like I was giving away too much of the show. 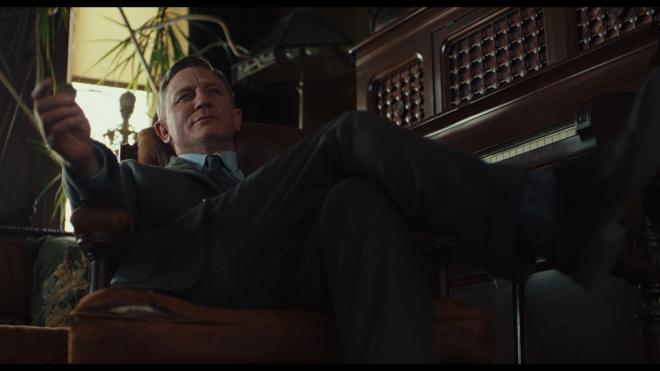 So much of Johnson's clever script hinges not only on plot twists and turns but character descriptions and relationships. Yes, I know this is the age of the internet and terrible marketing gives away an entire film in 90-seconds, but I don't want to contribute. If there is just one reader out there that's going into this movie like a cold fish at the Friday fish fry, I don't want to spoil a single thing about the movie.

At this point, you've probably surmised that I loved this film. Knives Out was everything I wanted from a comically inclined murder mystery thriller - and more! I was going into this film having seen only the briefest of trailers hoping for another Clue or Murder By Death that takes the tried and true Agatha Christie mold and spins it around a bit for some fun. What we get with Knives Out is probably one of the best cinematic versions of Christie's Hercule Poirot in the form of Daniel Craig as Benoit Blanc - the dashing gentleman detective. Craig ticks off all of the character boxes of the role while bringing his own deadpan comedic delivery that made his time in Logan Lucky such a delight. Bond this is not.

On top of Craig, this movie features a variable who's who of character actors including Ana De Armas in a breakout role with Jamie Lee Curtis delivering her pat pissed off persona that crops up when an interviewer asks a stupid question. If that wasn't enough Michael Shannon gets to bring a dry comedic touch to his traditional creepy character with Don Johnson turning in a hell of a role as Curtis' husband while Chris Evans gets to play bratty and entitled as their son. Christopher Plummer again turns in a delightful performance but the true comedy queen of this show is Toni Collette delivering her best Goop impression.

I don't usually like to call any particular film of any given year a "Favorite." I always have a list. Parasite was an incredible movie, I loved The Lighthouse, Jojo Rabbit touched my childish absurdist heart, Dolemite Is My Name hit me in my aspiring filmmaker feels, while 1917 was a thrilling entry in the often bloated war movie genre. But this year, in addition to that wide range of movies I just listed, I am pinning Knives Out as my favorite movie of 2019. It was pure entertainment from start to finish that didn't pander or take the intelligence of its audience for granted. After multiple theater viewings and now a couple at home, I'm still overjoyed with this movie. There are so many nods and homages to the genre it's damn near impossible to catalog them all. Every time I watch this I see something new detail that sucks me into the plot or catch a line delivery that makes me laugh. It's a great movie. I wouldn't call it the "Best Picture" of the year exactly, but it's my personal favorite and one I'll be pulling out for multiple viewings again and again.

Lionsgate delivers Knives Out to 4K UHD with a splendid 2-disc 4K UHD Blu-ray + Blu-ray + Digital release. The discs are housed in a standard black eco-friendly case with identical cardboard slipcover artwork. The disc loads to trailers for other Lionsgate releases before arriving at an animated main menu with traditional navigation options. All of the bonus features are found on both the 4K disc and the 1080p Blu-ray.

Knives Out arrives on 4K UHD with a particularly interesting 2160p 1.85:1 Dolby Vision transfer upsampled from a 2K Digital Intermediate. While a native 4K DI would have been incredible, this transfer is a rousing success in a large part because of cinematographer Steve Yedlin's work behind the scenes to write special algorithms to replicate the look and feel of 35mm digitally. Outside of a couple establishing shots that don't quite make it, the image is impressively organic and film-like looking. Going into my first viewing I didn't know it was shot digitally and was thoroughly convinced by the results. That behind the scenes work pays off for this transfer allowing fine details in costuming and production design room to flourish. That sense of a "grain" structure appears more natural and organic here than in the already impressive 1080p Blur-ay.

So on top of that "film-like" appearance looking more natural, this transfer gains the added riches of Dolby Vision HDR. The film comes with a warmer, yellow/brown vibe throughout and those effects are nicely amplified while also preserving the rich primaries, enhancing black levels, and giving bright whites more balance and nuance. If you run down the list of everything a UHD transfer should bring to your home screen, this one delivers. Small subtleties in shadow gradience, the balance to bright whites - in particular during the opening interrogation scenes - just looks gorgeous. The whole show looks amazing from start to finish - whether or not it was actually shot on film.

Knives Out carves out a delightfully subtle Dolby Atmos audio mix. Not like your typical blockbuster, Knives Out uses Atmos for more specific plot-oriented sound effects - of which I can't give too much detail other than to say they work! As a light sleeper, I feel Jamie Lee Curtis' pain in this one. While a 5.1 mix probably would have been just fine, Atmos really helps give each room of the house a distinct feel. The study crime scene is tight and cramped whereas the study or the drawing room feel much larger and more open. The front/center channels deliver much of the heavy lifting while sides, rears, and verticals give you that added sense of space and dimensionality. Even during the quietest of moments, the surrounds remain active in subtle ways. Some things you're supposed to pay particular attention to so keep your ears open! As for the rest of the elements; the dialog is clean and clear throughout with scoring taking a nice prominence as key pieces of evidence come together. Levels are spot on without any need for monitoring.

Tip of the hat to Lionsgate for going all out with the bonus features here. It's pretty damn rare outside of a niche studio release to see this sort of attention paid to delivering top quality extras. You get two commentary tracks along with a feature-length making-of with plenty of extra tidbits and pieces well worth watching!

I rarely like to call any one film a favorite film of the year, but even with the stacked competition of 2019, I have to call Knives Out my favorite of the year. I love murder mystery thrillers and Rian Johnson delivered a delightfully entertaining show that plays homage to the great works of Agatha Christie while crafting something that feels truly unique and fun. I'm overjoyed that this film became an unexpected sleeper hit of the holiday season ensuring that a sequel is already in the works.

Lionsgate delivers one hell of a 4K Ultra HD Blu-ray release for Knives Out worthy of a true "Collector's Edition" status. Featuring a beautiful 4K transfer with Dolby Vision HDR as well as a subtle but effective Atmos mix, Knives Out is packed to the scabbard with a variety of terrific worthwhile bonus features that'll keep you busy for hours. If you're a fan of the genre this is a no brainer. If you're after something entertaining that'll make you want to revisit the movie again and again, Knives Out on 4K UHD Blu-ray is a Must Own.