A young boy living in the waining days of WWII learns the true power of love by befriending a young Jewish girl living in his attic - against the wishes of his imaginary best friend, Hitler. Taika Waititi's charming, daffy, and wonderfully heartwarming and even heartbreaking satire Jojo Rabbit is practically a crash course in how to deal with hate in a culture. 20th Century Fox delivers Jojo Rabbit to 4K UHD Blu-ray with an often gorgeous video transfer and an engaging audio mix. Bonus features are a bit light. Just the same, it's not difficult to call to release Highly Recommended.

Check out our Blu-ray Review

Jojo (Roman Griffin Davis) is like any other boy his age. He goes to camp. Participates in social activities. He has friends - imaginary and real. He strives to be the best he can be to the adults he looks up to. The problem is it's the last days of World War II Germany. Jojo desperately wants to fit in with the other Nazi youth despite his mother's (Scarlett Johansson) wishes. After an unfortunate grenade incident sidelines Jojo from the action, he'll learn things that directly challenge the rhetoric he was taught when he discovers Elsa, a Jewish girl being hidden by Jojo's mother in their attic. With all of these conflicting messages, Jojo must turn to the one person he trusts most - his imaginary friend Adolph Hitler (Taika Waititi). 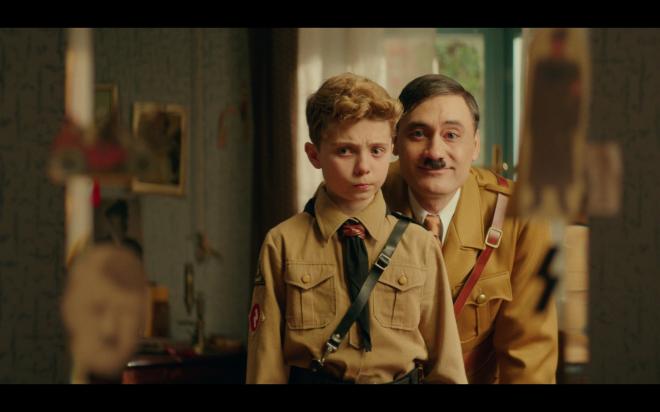 I never had any doubt that Jojo Rabbit would be a good film. After Waititi's previous efforts of Hunt for the Wilderpeople, What We Do in the Shadows or even far back material like Eagle vs. Shark; there's an undeniable charm to the human characters he commits to screen. For myself he was the perfect fit for Thor: Ragnarok to inject humor but also inject some personal drama to the character. For Jojo, I'd only heard of the novel, I never sat down to read it but I knew the gist of it. But I don't think I was fully prepared for what Waititi managed to craft with this story.

Making fun of Nazi's is easy. Mel Brooks banked his early film career on doing just that. Waititi doesn't just make fun of Nazis - again a welcome thing - he makes fun of the notion of hate. Through little Jojo, we're pulled along on a journey that shows his indoctrination - all of the bull that he was told to make him feel superior to other people. His people are the best people - and more importantly, his race is purer than any other. He's one of a very special club. But all of that is a lie. Through his mother and then when he actually takes time to get to know Elsa, he learns that everything he's been told to by zealots like Deertz (Stephen Merchant) was a lie. Making Adolf imaginary is pitch-perfect satire. We get to dissect Der Fuhrer's own beliefs and like the character in this film - they're imaginary.

That alone would have been enough for a pretty solid film. However, Waititi goes one step farther with Sam Rockwell's Captain Klenzendorf. On the surface, we're supposed to assume he's your tried and true paper-hanging Nazi that's disenfranchised with the party because an injury that doesn't inhibit his ability to fire a weapon or lead men into battle has relegated him to being little more than a camp counselor. Normally he would be a villain, but he's far from it. Yes, he's a part of the Nazi party - but he's also apparently a closeted homosexual with his assistant Finkel (Alfie Allen) at a time when that would get you killed or have you shipped out on the next train. In addition to several small gestures of humanity, he's proof you can within a system of hate to prove it wrong. He's obviously the best soldier in the army - even has the best sense of style - but he himself doesn't hate other people. He's out to prove no one is better than anyone else - least of all him - just because some guy says so.

I could go on and on about this movie dissecting every little character beat - but then I'd be spoiling a lot of the movie. I already feel like I've said too much, but I just want to keep talking about Jojo Rabbit! I realize now I didn't even mention Scarlett Johansson who was a gem in this movie. I feel like my appreciation comes and goes on a case by case basis, but this year she killed it with A Marriage Story and again here in a supporting role in Jojo Rabbit. Yeah, her Deutsch accent may not be the most convincing, but it's the motherly spirit of trying to raise her son with love in a world of hate while living up to a cause she feels is larger than even herself.

So enough of me blathering. If you haven't seen Jojo Rabbit - treat yourself. 2019 was a great year for very good movies and this was one of my favorites. I wouldn't call it best picture, it's a great movie - one I'll watch over and over for years to come. Even when you think you don't want to watch it again - as was my attitude before sitting down to this review - you're quickly swept up in the energy and pure joy this film brings. It's got heart, love, humor, tragedy all wrapped into one wonderful little package.

Upscaled from a 2K digital intermediate - Jojo Rabbit offers an often beautiful 2160p with HDR10 transfer. Intentionally shot with a warmer, softer visual aesthetic, there is only a modest improvement in overall details between the included 1080p Blu-ray and this disc. However, where it counts most is in closeups and middle shots where I felt like clothing textures, skin pigmentation, hairstyles, etc. were all greatly improved over the 1080p disc. Faces in particular as there are a number of close intimate moments where you're intended to look into the eyes of the character and the added resolution here leads to that emotional empathetic payoff.

HDR10 is a welcome addition as well. Colors for this film already favored the yellow/browns, with the added color range refinements the image feels warmer and adds to the film's wholesome vibrancy. Primaries still have impressive pop - red is, in particular, a standout. Blues also get their day to shine in the sun. This isn't a dour dark and depressing looking film. Part of the impact of even the saddest moments is that it's featured in full bright color. Where I saw the largest improvement is with shadows and black levels being nice and inky. The added shading and shadow separation give the image a welcome three-dimensional effect. Honestly, aside from it not being a native 4K source, I have nothing bad to say about this transfer. Maybe not reference quality, but still excellent.

Jojo Rabbit makes the most of its DTS-HD MA 5.1 mix. Here's a case where even Atmos may not have helped much. I noticed that during my couple theatrical viewings that there really wasn't much of a "surround" effect. Most of the film was very front/center with occasional drips of side/rear work and that experience is largely replicated here. While there may not be a lot of action-packed surround material, there is terrific object spacing. The sound effects, music, dialogue all work to give the soundscape some appreciable imaging. Moments in the camp, scenes where Jojo investigates sounds in the attic, the final war sequence does open up the surround range, but even then they're not intended to be overly dramatic. So strictly from a surround sound experience, maybe this one's lacking some punch, but it's still very good. Dialog is clean and clear throughout and levels are spot on.

Bonus features for Jojo Rabbit are a slight tad bit on the thin side. The Taika Waititi audio commentary that's found on the 4K disc as wells as the Blu-ray is great - listening to it as I write this review in fact - and he's got great energy that he brings to the discussion about the making of the film. The deleted scenes are pretty good but you can see why they got cut. Outtakes are outtakes and are some decent cutups. The making of is better than your average talking head EPK is welcome.

Jojo Rabbit is a ridiculous film but it's earnest and sincere at the same time. It's a poignant comedic satire that's also an honest dramatic tragedy. The film works tirelessly to remind the audience that love is far easier in life than hate. The cast is wonderful, the energy is magnetic, the writing and directing witty and sharp. It walks a thin line with comedy, but it's a delightfully human film that never loses itself.

Jojo Rabbit races to 4K UHD Blu-ray with an often beautiful 4K UHD with HDR10 transfer, an effective audio track, and a decent assortment of bonus features. 2019 was packed with great movies and this was in the top tier of the year. Highly Recommended.