Midway is the Roland Emmerich passion project about Pearl Harbor and the following battles between America and Japan. Instead of focusing on character development, Emmerich went for the historical accuracy of the story, which was the ultimate flaw in this film. With the 4K UHD Dolby Vision picture and the Dolby Atmos audio mix, along with some worthwhile bonus features, this release is Recommended!

We also reviewed the film on 4K Ultra-HD Blu-ray. 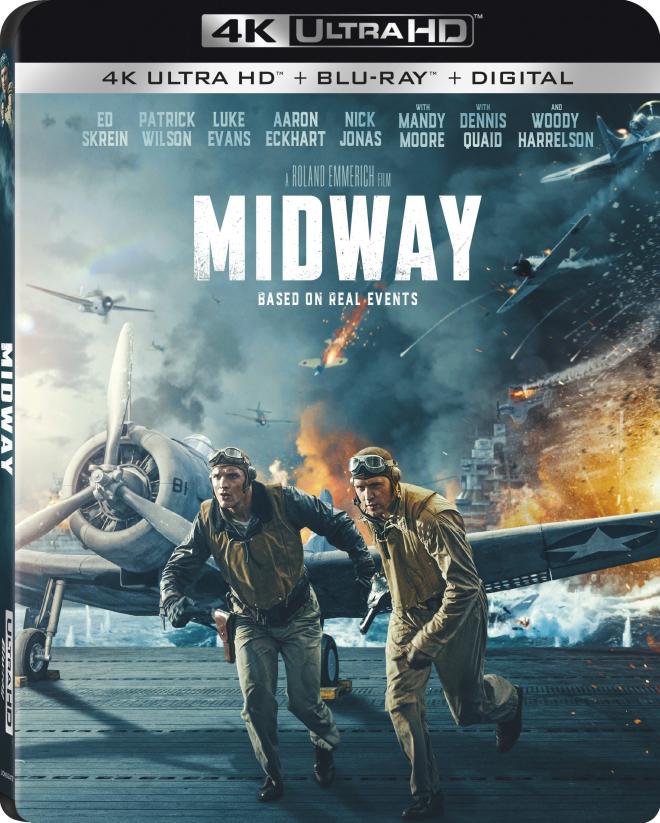 The infamous director Roland Emmerich once told a story about a giant alien invasion and war on modern-day Earth led by Will Smith and Jeff Goldblum in Independence Day. That film catapulted the filmmaker to superstardom that paved the way for many future big blockbuster disaster pictures. But in 2019, Emmerich couldn't get a studio to raise all the money for his WWII passion project about Pearl Harbor and the subsequent battles that followed in his film Midway. Somehow, he managed to score a $100 million budget from investors, marking Midway one of the biggest budget independent movies ever made. The result was a lackluster script that doesn't stay focused on the story at hand, despite it's phenomenal attention to detail and keeping the characters and their actions as close to the history books as possible.

With an all-star ensemble cast, the movie starts out with the attack on Pearl Harbor that evokes such memories from the Michael Bay film Pearl Harbor in 2001. Once the surprise attack is over, the hardcore history buffs will be excited to know that the rest of the film goes back and forth between the Japanese command team and the USA efforts to win the war with many long, drawn-out sequences of strategy, character development or lack thereof, that culminates in the titular Midway battle. It's unfortunate that first-time screenwriter Wes Tooke provided a misguided and tangent laden screenplay that leaves most all the large dramatic moments on the backburner. Still, Emmerich gives the action all the highflying visual effects of pilots and their jets hailing through a series of bullets and debris, but again, this all is done better in his alien-invasion film from 1994.

Ed Skrein plays real-life Navy commander Dick Best, who walks, talks, and acts like Tom Cruise in Top Gun. In fact, Maverick might have been the fictional child of Dick Best, who doesn't follow orders well, takes a hazardous approach to flying, and can save the day in the end. Meanwhile, Nick Jonas plays a sailor who is immediately promoted for bravery, Patrick Wilson is the unapologetic Edwin T. Layton Lt. Commander Intelligence officer, and even Woody Harrelson shows his face for a brief moment for good measure to ensure the safety and success of the USA winning the war and furthering their maneuvers and attacks on Japan.

Emmerich went to great lengths to tell an accurate portrayal of what happened during this time, but the screenplay doesn't allow its characters to have those big cinematic hero moments. Instead, there are a ton of cheesy dialogue between all the men that seem completely out of place, which is where Emmerich will insert and action sequence before the actor finishes their line of dialogue. The fact that Emmerich showcases the Japanese side of the war is commendable, but it's nothing more than talks of tactics and plans of travel, which arrives at the redundant yard line early on. There's just no big development with the enemy side here, although it's feature prominently.

Midway does a good job with its historical accuracy, but with that detail, the film never allows for that grande cinematic quality to really connect or cheer for any of the characters. With that lacking element, the characters and action sequences are less than exciting, despite a decent effort for a passion project.

Midway fights through the enemy ships to arrive on 4K UHD with a great 2-Disc 4K UHD Blu-ray + Blu-ray + Digitial Copy. The discs are housed in a hard, black, plastic case with a cardboard cover. The artwork features a couple of characters running from battle. There is an insert for the digital code. 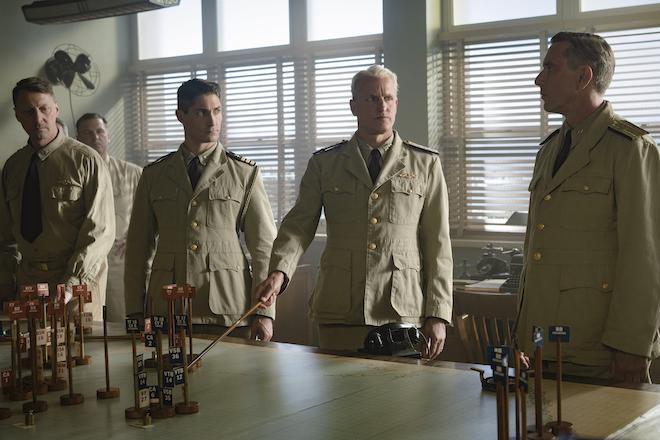 Midway dive bombs into a 2160p 4K Ultra-HD transfer in Dolby Vision that is a noticeable upgrade from its 1080p Blu-ray version. The rich color palette and vivid detail are a delight to watch here.

Right from the start, the colors are more vibrant and enhanced with the Dolby Vision enabled. The dark blue ocean waters contrast nicely with the light blue skies above with the angelic white clouds. In between these varying shades of blue is the giant battle in the air and on the sea. There are huge plumes of black and gray smoke, riddled with bright orange and red fiery explosions along with the silver ships and planes. Up close, colors of green, yellow and red are featured in costumes that look amazing and are well balanced in each chaotic sequence. These detailed colors in the uniforms are enhanced with the Dolby Vision and look great. Black levels are deep and inky in the night time scenes and lower-lit interiors that rarely come with crush, however, some bleeding cropped up in a scene or two. Skin tones were natural throughout.

The detail is very sharp for a heavy CGI effects film. Wide shots of the many planes and battleships attacking each other look amazing with all of their intricate details and textures, along with the intense smoke fumes, explosions, and debris that cover the screen. Bullets and missiles flying by also look realistic and can be seen at all times. Closeups reveal some wonderful facial features, including individual hairs, facial pores, wrinkles, makeup effects, gory wounds, and more on the actor's faces. The WWII uniforms showcase the necessary textures that all look realistic. Some slight video noise and aliasing cropped up during some big CGI sequences and the inevitable green screen in 4K can be easily noticeable, but it never detracts away from the picture at hand. There's a lot to like about this video presentation. 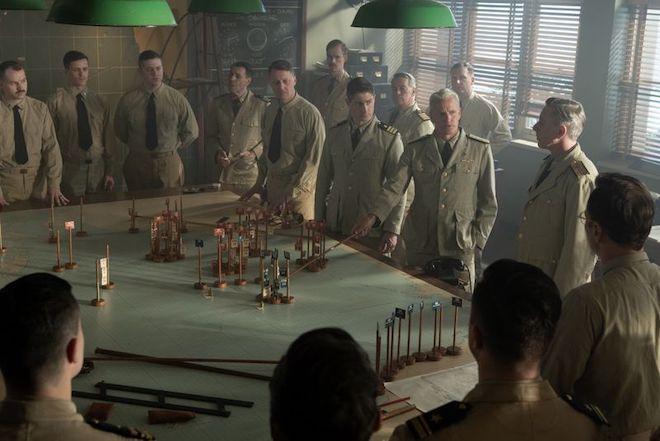 Early on in the film, the entire speaker system received a full workout during wartime. Loud plane engines roaring, bullets flying by, giant explosions everywhere on the screen, big battle guns releasing their missiles, along with bombs being dropped on their targets all sound incredible with fantastic directionality. On top of this, noises of people screaming, opening doors, footsteps on stairs and the deck all sound incredible. The rear speakers are robust and thrilling on a consistent basis that fully immerses you in the battle.

It's also in the big action sequences where the height speakers come into play with large sounds of planes flying overhead and dropped missiles that seem to fall through the media room. The low end of bass has a constant rumble that is heavy but not rocky that always amplifies each gunfire and explosion. The quieter moments provide the necessary reverb and echo when in large rooms or on Navy ships. The score by Thomas Wander and Harald Kloser always adds to the suspense and action and the dialogue is clear and easy to follow along with in the frantic fight-scenes. 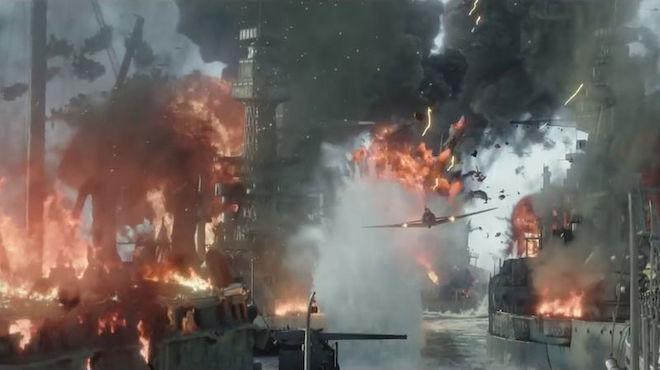 There are about 68 minutes worth of bonus features located here, including discussions about the real-life people and events of the movie, an audio commentary, and a sweet talk with two veterans.

Midway gets in the way of itself by leaning all the way over on being historically factual more than telling a cinematic story with good character development and thrilling action sequences. There is a great cast available, but the material they're given doesn't allow for something memorable, which is a shame, because this is a magnificent story. On the other hand, this 4K UHD presentation with Dolby Vision is a good uptick in quality and the Dolby Atmos audio track is demo-worthy. The bonus features are worth the time, but there is a lack of behind the scenes and visual effects work discussions, which would have been fun to watch. Still, this comes Recommended!