Nearly four decades later, legendary horror maestro Stephen King revisits the deeply upsetting terror of the Overlook Hotel in Doctor Sleep, a novel sequel to his 1977 genre favorite The Shining. For the film adaptation of the book, writer, director and editor Mike Flanagan took the unusual but nonetheless captivating approach of being somewhat faithful to King's story while also serving as a direct follow-up to Stanley Kubrick's 1980 psychological horror masterpiece. Flanagan even goes so far as replicating many scenes shot-for-shot from the terrifying classic while simultaneously showing little Danny and his mother Wendy (Alex Essoe doing her best Shelley Duvall impression) recovering after the events, living in the sunshine state: Florida. It's in these moments we also learn Dick Hallorann (Carl Lumbly) teaching Danny to use his psychic abilities to lock away the evil spirits still haunting him.

It's a cleverly fascinating but also a dispiriting visual metaphor for repressing painful memories in lieu of confronting the trauma and learning to heal from it. And we soon discover this to be the case when introduced to an alcoholic and homeless Danny (Ewan McGregor), a man in his forties finding that alcohol provides a better comforting tool for dulling not only the pain but his powerful psychic skills as well. Even as he stumbles his way onto the not-so-figurative road of recovery in a small New Hampshire town and with the help of friend Billy Freeman (Cliff Curtis), Danny sadly remains cursed by the ghost of his father, which Flanagan displays in a job interview that feels like an eerie homage to Kubrick's film. Working as a hospice orderly, a sober and rehabilitated Danny regains his powers and embraces them as a gift, another cleverly subtle expression for one's trauma as an empowering tool to help others. 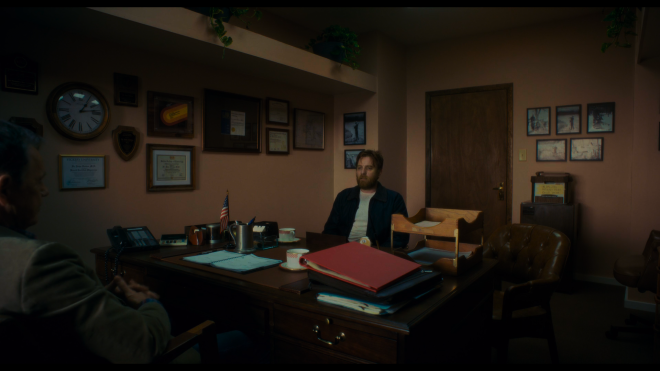 During those years of sobriety, Danny befriends the more powerful and talented Abra Stone (Kyliegh Curran), an amazingly gifted kid who can communicate telepathically and astral project her consciousness from thousands of miles away. This attracts the attention of the Rose the Hat (Rebecca Ferguson), the barbarous cult leader of psychic vampires known as the True Knot, inadvertently directing this caravan of killers of innocence hungering for Abra's essence. Ferguson is surprisingly splendid as an unsuspecting fiend with the terrifying talent of luring victims with her devilish charms. She's an attractively enchanting siren for the modern world, forcing Danny to revisit the horrors of his past as the best tool for battling a monster mysteriously lacking one. And a return to the Overlook is both an opportunity for Flanagan to flex his visual creativity and a strong closing chapter in the life of Dan Torrance.

Warner Home Video brings Doctor Sleep on Ultra HD Blu-ray as a two-disc combo pack with a Digital Copy code. When redeeming said code at WB.com and MoviesAnywhere, users have access to both the theatrical version and the Director's Cut in 4K Dolby Vision with Dolby Atmos audio. Meanwhile, the triple-layered UHD100 disc contains only the 152-min theatrical version and sits comfortably opposite a Region Free, BD50 copy with 180-min Director's Cut.

The 28-minute difference between the two versions is relatively small, mostly scenes of dialogue and more of characters displaying their psychic abilities. However, the additional footage surprisingly adds a bit more depth and improves the overall story, making it arguably the better of the two. Both discs are housed in a black, eco-vortex case with a cardboard slipcover. At startup, viewers are taken to a generic static screen with the usual options along the bottom and music playing in the background.

Our telepathic heroes battle psychic vampires on Ultra HD equipped with a gorgeous, often-stunning HEVC H.265 encode. Shot exclusively on the Arri Alexa 65 camera system and later mastered to a 4K digital intermediate, the freshly-minted transfer arrives with sharper overall definition and clarity in every scene. The smallest object decorating the interior of Rose's RV is ever so slightly clearer in the background while the surrounding foliage is noticeably more distinct, and we can better make out the fabric in the costumes, blankets and carpets. Facial complexions reveal a bit more textural details in the entire cast, exposing the individual pores, the lightest wrinkle and tiniest negligible blemish. While the mild banding seen on the Blu-ray may be gone in this 2160p version, there remains a teensy-weensy bit of aliasing along the sharpest edges, keeping the picture just short of perfection.

The traumatic horror of the Overlook is resurrected thanks to the notable improvement in contrast and brightness balance. At first glance, it's not the sort of dramatic leaps and bounds difference over its HD brethren, but the uptick is noticeable and appreciable nonetheless, delivering better, more pronounced whites in the clothing, vehicles and various lights. Specular highlights also earn a welcomed boost, looking crisper and narrower along the edges of clouds and within the brightest spots while also supplying metallic surfaces with a realistic polish and tighter glistening twinkle. Meanwhile, black levels are inkier with a silkier gloss, but the blackest areas still suffer mildly from a tad of crush. Nevertheless, shadows maintain strong visibility within the darkest corners, providing the 1.85:1 image with a lovely cinematic quality and appreciable dimensionality.

Similarly, Michael Fimognari's stylized photography largely limits the overall color palette, favoring a flatter, more restrained approach to the material, which is done to generate an ominously eerie atmosphere. Notwithstanding, the Dolby Vision HDR presentation offers a faint step-up over its HD SDR counterpart, displaying slightly fuller and more lively primaries, especially the blues ranging from deep indigo cobalt to beautiful cerulean sapphire shades. Likewise, reds have more of a dramatic pop, such as the animated candy rose in clothing and makeup or the full-bodied ruby crimson in blood. The orange-teal cinematography is also more animated and vivid, furnishing the scares with spirited fuschia pinks, rich plums and soft violets. As a cool, creative throwback to Kubrick's classic, much of the photography is seeped in an ocean teal tones with vibrant fiery oranges and warm buttery yellows, such as Danny's private conversation with Dr. John Dolton or when he wanders into the Overlook's bar. (Dolby Vision Video Rating: 88/100)

Spooky cult caravans travel into home theaters with an awesomely creepy, demo-worthy Dolby Atmos soundtrack, sure to deliver the scares while immersing viewers into this eerily ominous world of psychic monsters.

From beginning to end, the room is cluttered with the subtle noises of birds chirping above, the wind blowing through the trees and telepathetic voices faintly echoing over the listening area. Some of the best moments are specific instruments in the score, especially the ringing of bells and claves, flawlessly panning and gracefully circling directly overhead, generating a marvelously effective hemispheric soundfield. Other atmospherics travel between the surrounds effortlessly with the sequences at the Overlook being a memorable highlight, creating an endlessly creepy environment.

In the fronts, imaging is continuously energetic and incredibly spacious, swarming with lots of background activity fluidly and convincingly moving between three channels and into the off-screen space. A splendid and dynamic mid-range exhibits rich, detailed clarity in the higher frequencies, allowing for room-penetrating precision and warmth within the orchestration and in the many ear-piercing action sequences. Amid the supernatural chaos, vocals remain precise and very well-prioritized. The low-end delivers a room-energizing presence in the music, scares and the thump of heartbeats, staying mostly within the mid to high 20Hz range. Then, there are times when bass occasionally digs deep into the ultra-low depths, as low as 10Hz at surprisingly high decibels, sending creepy, wall-rattling waves through the room (bass chart). (Dolby Atmos Audio Rating: 98/100)

The same set of supplements is shared between both the UHD and Blu-ray discs.

As both an adaptation to Stephen King's novel and a sequel to Stanley Kubrick's horror masterpiece, Mike Flanagan's Doctor Sleep reawakens old horror wounds and past traumas. Set forty years after the terrifying events at the Overlook Hotel, Ewan McGregor's Danny beats his personal demons only to do battle against Rebecca Ferguson's Rose the Hat and her caravan cult of psychic vampires. The fight to preserve a child's innocence haunts 4K Ultra HD with a terrifyingly beautiful Dolby Vision HDR presentation and a spookily awesome, reference-quality Dolby Atmos soundtrack. With a small collection of bonuses borrowed from the Blu-ray, which contains the Director's Cut, the UHD edition is highly recommended.

Sale Price 23.39
List Price 24.99
Buy Now
3rd Party 12.04
In Stock.
See what people are saying about this story or others
See Comments in Forum
Previous Next
Pre-Orders
Tomorrow's latest releases