Pixar's Brave defies the odds and Disney traditions with beauty and elegance that's as wild and free-spirited as the story's central heroine. The Ultra HD arrives with an excellent 4K HDR10 presentation, a fantastic Dolby Atmos track, and the same supplements as the Blu-ray. Recommended.

One of the best aspects of Pixar's Brave is the studio beating Disney at their own game. Walt Disney Studios is arguably most famous for adapting classic folk tales that often featured princesses, witches, magic and various other tropes. And when Brave hit cinemas, Disney Animation was at the height of their "Revival" under the leadership of John Lassetter, a return to the company's conventional storytelling roots but with a twist. A wholly original tale by Brenda Chapman (The Prince of Egypt, The Lion King), who also served as co-director, this CG-animated fantasy film, on the other hand, embraced well-known fairy tale conceits, improved upon them and even turned them on their heads.

Before Princess Jasmine challenged cultural norms in the live-action version of Aladdin, Princess Merida (Kelly Macdonald) defied outdated customs of medieval Scotland, traditions fiercely enforced by her mother (Emma Thompson) with bear-like assertiveness. She even goes so far as to compete in games for her own hand in marriage, demonstrating her skills as a warrior and her intelligence. However, Chapman's plot complicates matters when The Witch (Julie Walters) shows up with a magical cake and essentially suggests Merida's strength can be just as much a virtue and asset as it can be a fault and shortcoming, feeding into an impulsively stubborn pride.

The end of the second act and into the third is a bit murky with the whole Mor'du subplot feeling somewhat forced and over-staying its welcome. However, it all eventually comes together to a well-earned, tear-jerking and genuinely heartfelt conclusion. Brave is one of Pixar's better films, splendidly imaginative, both in the visuals and in the story, and all-around fun. 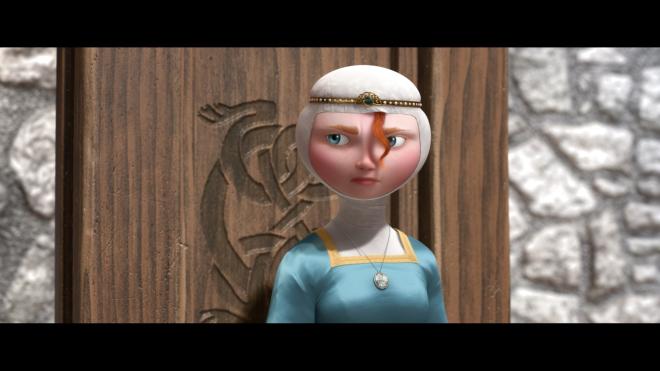 For a more in-depth take on the film, check out David Krauss's review of the 2012 Blu-ray HERE.

Walt Disney Studios Home Entertainment brings Brave to 4K Ultra HD Blu-ray as a three-disc combo pack with a flyer for a Disney Digital Copy. When redeeming said code via RedeemDigitalMovie.com or MoviesAnywhere, users have access to the 4K digital version in Dolby Vision HDR with Dolby Atmos audio. The dual-layered UHD66 disc sits comfortably opposite a Region Free, BD50 disc, which is identical to the 2012 Blu-ray, atop another BD25 disc containing all the bonus material. All three are housed inside a black, eco-vortex case with a glossy, lightly-embossed slipcover. At startup, viewers are taken to a static screen where owners can choose between the start of the movie or look through the menu.

Merida takes aim at Ultra HD and hits her mark thanks to a great-looking HEVC H.265 encode that delivers a worthy upgrade over its Blu-ray competitor. Granted, the differences between this 2160p picture, upscaled from a 2K digital intermediate, and its 1080p HD brethren are relatively small, but this transfer comes with a welcomed uptick that fans will appreciate. The fine lines and stitching in the ornate clothing and hair are slightly sharper, and the leaves, blades of grass and moss growing on the surrounding foliage are a bit more defined. The wood and stone architecture of the castle looks aged and weathered, and the wrinkles and blemishes of the witch's face are plainly visible. Some of the extreme wide shots are on the softer side and even poorly-resolved in some instances, but overall, the animation is sharp.

Likewise, the 4K video doesn't seem to gain significantly from the higher dynamic range, but contrast and brightness balance nonetheless enjoy a small boost with black levels showing the best improvement. The hair of some characters and the fur of bears are inky with an impressive velvety gloss. Shadows are also richer without sacrificing the finer details within the darkest corners, providing the 2.39:1 image with a lovely cinematic appeal and excellent dimensionality. The whites of fluffy clouds, hairs of older characters and some articles of clothing are cleaner with better brilliance at its brightest. Specular highlights may not show a dramatic push, but the hottest spots display a tighter, crisper glow in the will-o'-the-wisp, torches, flashes of lightning and the gleam of sunshine off faces and metallic surfaces.

The original Blu-ray of Brave came with a stunning parade of colors, and this HDR10 presentation nicely improves upon its HD SDR counterpart with deeper shades of reds in some spots and dramatically brilliant blues in the clothing, tapestries, and will-o'-the-wisps. It may not compare to some of the best CG-animated films we've seen on UHD, but the overall palette benefits with greens enjoying the biggest boost, ranging from lively deep moss of the forest and the shamrock pop in the grass to the fern sage of the witch's hut and the ocean teal of Merida's dress. Of course, the cinematography's most eye-catching aspect is the sumptuous, varied array of tiger orange in Merida's hair, the warm amber hues from the torches' glow and the vibrant marigold yellows of the fires. All in all, it's a welcomed step-up. (HDR10 Video Rating: 78/100)

The fantasy adventure flick is betrothed to an outstanding, near-reference Dolby Atmos soundtrack that is every bit the match of its DTS-HD counterpart and even challenges it some spots. This is especially true in sequences outside wandering through the forest where the noise of wildlife and the rustling of leaves employ the surrounds and subtly expand into the ceiling speakers, creating a beautifully engaging and enveloping soundscape. At other times, arrows flawlessly pan overhead, and raindrops convincingly fall and distinctly land above the listening area while inside the castle, voices, screams, slamming doors and clanking swords reverberate from all around. The score also joins the fun bleeding into all the speakers, and combined with the many well-placed atmospherics, this object-based mix often generates an immersive hemispheric soundfield.

Speaking of which, Patrick Doyle's score benefits most from the extra breathing room, spreading evenly across the entire soundstage with superb fidelity and acoustical details. Imaging feels expansive and broad, continuously layered with a variety of background activity that fluidly moves between the channels and into to the top heights, exhibiting excellent distinction and definition in the mid-range amid the loudest moments. Vocals are always prioritized and intelligible, even as characters move throughout the castle. To top it off, a palpable and robust low-end provides a weighty depth to the roars, a couch-shaking presence to the bears and an accurate, responsive punch to the arrows, making this Atmos track is a fantastic win over its lossless predecessor. (Dolby Atmos Audio Rating: 94/100)

For this Ultra HD edition, Disney/Pixar port over the same collection of bonus features as the previous release, all of which are spread between a pair of accompanying Blu-ray discs.

Pixar struck gold once again in Brave, the studio's thirteenth CG-animated feature that follows a young woman's journey to forge her own path in defiance of cultural norms and traditions. The impressive beauty and excellence of the film is a wholly original fairy tale plot that essentially beat Disney at their own game, borrowing familiar tropes and surpassing them. Our fiery heroine takes aim at Ultra HD and hits her mark with an excellent 4K HDR10 presentation and fantastic, demo-worthy Dolby Atmos soundtrack, providing a notable upgrade fans will love. Porting over the same supplements as its Blu-ray predecessor, this UHD edition of the wonderfully imaginative and heart-warming film makes a recommended addition to the library.

Sale Price 17.53
List Price 39.99
Buy Now
3rd Party 17.53
In Stock.
See what people are saying about this story or others
See Comments in Forum
Previous Next
Pre-Orders
Tomorrow's latest releases