Guy Ritchie's Aladdin (2019) fails to cast the same magical spell as Disney's original animated classic, but the performances of Will Smith and Naomi Scott make for a tolerable watch. The live-action adaptation takes audiences on a magic carpet ride through 4K Ultra HD Blu-ray with a great-looking HDR10 presentation, a better Dolby Atmos soundtrack, and a small set of bonus features. Worth a Look.

On its own, Aladdin (2019) is a passable but ultimately forgettable musical fantasy, a mix of visual delights disguising some rather banal music, some middling performances, and an uninspiring story. Compared to Disney's 1992 animated classic starring the indelible Robin Williams, however, this live-action remake where Will Smith takes on the role of Genie is frankly terrible, which puts this otherwise elaborate production somewhere squarely in the middle and tolerable. This latest trend of reimagining and updating Disney classics, which I personally don't include in the studios' current Revival Era of CG-animated features, has been losing steam and feeling drained of imagination since Alice Through the Looking Glass from producer Tim Burton, the filmmaker who essentially kick-started this craze with his Alice remake. I'm not referring to the box-office success of these movies but to the stories, which are largely repeats of their counterparts with changes that add nothing or serve little purpose.

In the case of this musical fantasy, the alternations are unwieldy and ineptly executed, particularly Aladdin (Mena Massoud) and Jasmine's (Naomi Scott) meet-cute in Agrabah's street bazaar. From a script by long-time Burton collaborator John August and filmmaker Guy Ritchie, the director has seen fit to introduce both characters at the same time rather than allowing audiences to be familiar with them as individuals. Yet the British filmmaker of cult favorites Snatch and Sherlock Holmes wants to have it both ways by echoing the same scenes as its predecessor almost beat by beat before awkwardly bumbling into the well-known "One Jump Ahead" song-and-dance number. In fact, Ritchie clearly doesn't possess the eye for musicals and dance choreography, and with editor James Herbert, who has demonstrated a talent for piecing action sequences together to great effect, the camerawork feels too chaotic and frenzied, denying audiences from better appreciating or being wowed by the spectacle. 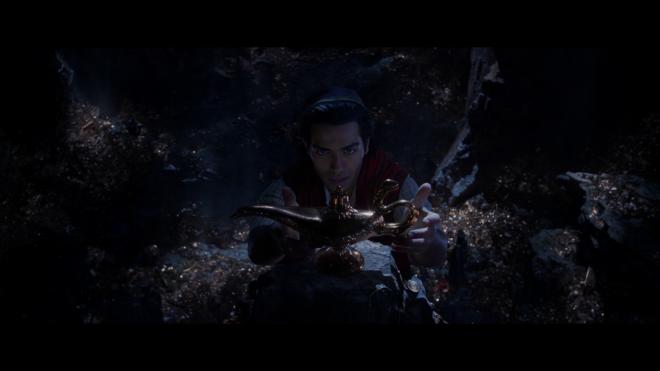 The same can not be said of Smith's flamboyantly bombastic pageantries when performing the celebrated "Friend Like Me" and "Prince Ali" songs. Thankfully, Ritchie's shortcomings behind the camera can't take away or botch Smith's natural charisma in front of the camera. It may not be quite as memorable or feel as timeless as Williams' Genie, but Smith brings enough of a unique spin to make it his own, casting a magical charm in those aforementioned songs that are hypnotic and enchanting. Moreover, Scott is the true standout star of the entire production, the only actor deserving to walk away from this otherwise pedestrian adaptation unscathed. Despite the two "Speechless" additions to the soundtrack, which feel oddly out-of-place and coldly forced, Scott brings is a thoughtful, intelligent presence to a Jasmine fighting not only to break from the outdated restraints of tradition but also find her individual voice and challenge a culture blind to a woman being sultan.

Unfortunately, the spell cast by Smith and Scott is deflected by the downright dull and drearily monotonous performances of Massoud and Marwan Kenzari as Jafar. Massoud doesn't possess the charm and presence to carry a feature of this magnitude. Kenzari is the better of the two, but he simply is not suited for or ever feels comfortable in the role of the nefarious, Machiavellian villain. Ritchie's Aladdin is also hampered by poorly-constructed CG work that continuously distracts from the enjoyment of the otherwise amazing efforts in the stage design. This is most evident in the unpolished and rather unsettling rendering of Smith as the Genie while Abu, Iago and the magic carpet can never make up their minds to be noticeably cartoonish or photorealistic. Even if we overlook these drawbacks, this adaptation simply lacks the magic and wonder of the original.

Walt Disney Studios Home Entertainment brings Aladdin (2019) to Ultra HD Blu-ray as a two-disc combo pack with a flyer for a Disney Digital Copy. When redeeming said code via RedeemDigitalMovie.com or MoviesAnywhere, users should access to the 4K UHD digital version in Dolby Vision HDR with Dolby Atmos. The dual-layered UHD66 disc sits comfortably opposite a Region Free, BD50 disc. Both are housed inside a black, eco-vortex case with an embossed, glossy slipcover. At startup, viewers are taken directly to the movie. 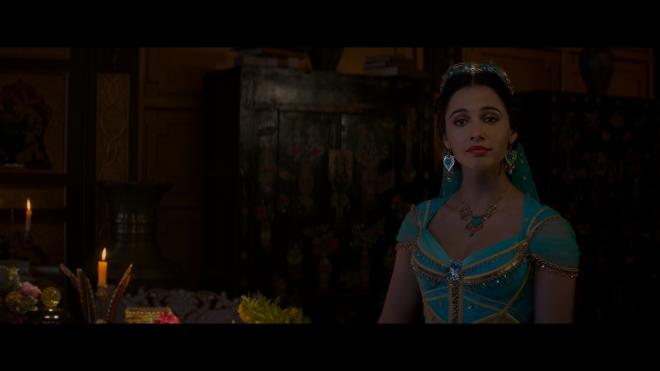 The live-action remake takes a magic carpet ride to the new world of Ultra HD with a great-looking if also somewhat ordinary HEVC H.265 encode that ultimately doesn't look much different to its day-and-date Blu-ray brethren.

To be sure, there some appreciable tweaks and gains sprinkled throughout to make the 2160p picture an admirable step-up, but they are relatively few and small. Coming from a 2K digital intermediate, the upscaled transfer enjoys an incremental bump in overall definition. The fine stitching in the intricately ornate costuming is a tad sharper. There's a bit better clarity in the weathered streets of Agrabah and the extravagantly baroque design of the palace, and faces are a little more distinct. However, resolution levels, on the whole, waver between occasionally striking to passable with a fair amount of softness. Much of this can be excused as the result of the cinematography and the CGI work, in particular, which is made more distractingly apparent and cartoonishly unnatural on Ultra HD.

In similar fashion, the 4K video sails into home theaters with spot-on contrast, displaying slightly crisper whites, but frankly, the overall balance is not any more dynamic or improved, floating comparatively the same as the HD version. To be fair, specular highlights are bolstered somewhat, displaying a moderately brighter and tighter glow around the sun or the way light glistens on jewelry and various metallic surfaces. Brightness levels, on the other hand, enjoy the biggest improvements, parading about with boosted, inkier blacks in the clothing, some of the furniture and the hair. Much of the action is also relatively darker, bathing many sequences with rich, velvety shadows. Thankfully, delineation remains strong with good visibility of the finer details, providing the 2.39:1 aspect ratio with a lovely cinematic appeal.

On a sadder, if not also rather disappointing, note, Alan Stewart's otherwise vibrant and colorfully flamboyant cinematography doesn't benefit much from the wider color gamut, largely looking about the equivalent of its HD SDR counterpart. Granted, the HDR10 presentation still showers the fictional city of Agrabah with a captivating array of tans, yellows, and oranges, and they arguably appear fuller, especially in the primaries. However, the gain is, in short, minimal, which is a shame considering the extensively elaborate costumes and stage design. Don't get me wrong, the photography remains beautiful and quite stunning, such as the Bollywood-style dance sequence, but it's simply not the sort of dramatic jump and difference over the already outstanding Blu-ray or compared to some of the best we've seen from the UHD format. 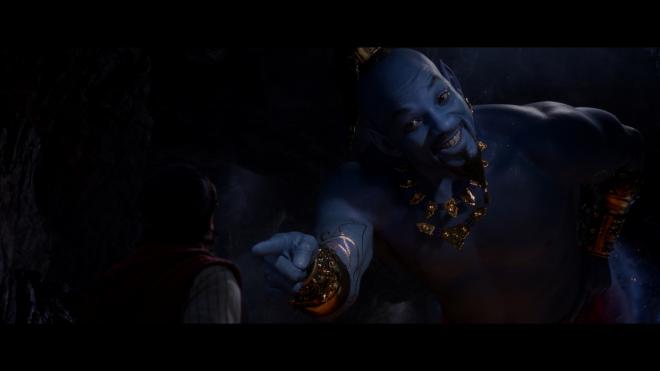 The musical fantasy soars through the skies of Ultra HD with an outstanding and delightfully enjoyable Dolby Atmos soundtrack, offering a few notable improvements over its DTS-HD MA counterpart to make this the preferred listen.

Granted, the track remains a very front-heavy affair with a majority of the background activity moving across the screen. Imaging is a bit broader and more spacious, as various ambient effects fluidly travel between the channels and into the top heights, nicely expanding the soundfield into a half-dome soundstage that's continuously engaging. The mid-range also feels more extensive with better distinction and clarity in the loudest segments. But like the lossless version, the design doesn't push far into the higher frequencies, suggesting that it's intentional although the volume had to be boosted up to -5 from reference to better appreciate the minor improvements. Nevertheless, the song and dance numbers enjoy a great deal of warmth and acoustical detailing. Meanwhile, the low-end provides the fantastical visuals and music with a weighty presence and some palpable oomph, and the vocals are well-prioritized with excellent intonation in the singing.

Similar to the DTS-HD track, this object-based mix doesn't quite make the best use of the format — at least, not compared to some of the best we've heard from similar releases, like The Greatest Showman. Certainly, there are several amusing moments where the chatter of crowds and people gathered at the party are heard in the surrounds and lightly bleed into the overheads. Occasionally, random effects also pan effectively and smoothly above the listening area, like when Genie or Iago fly through the air, and the Cave of Wonders sequence is one of the best segments with rocks crumbling and falling around. However, such moments are far and few in between and don't really generate the sort of hemispheric soundfield we've come to expect. Be that as it may and in spite of those minor qualms, this spatial-audio track is nonetheless a step up over its DTS-HD counterpart and complements the visuals well. (Dolby Atmos Audio Rating: 88/100) 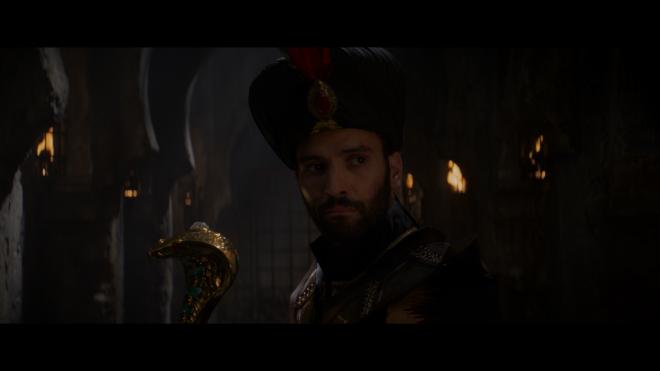 All bonus material is contained in the accompanying Blu-ray disc. 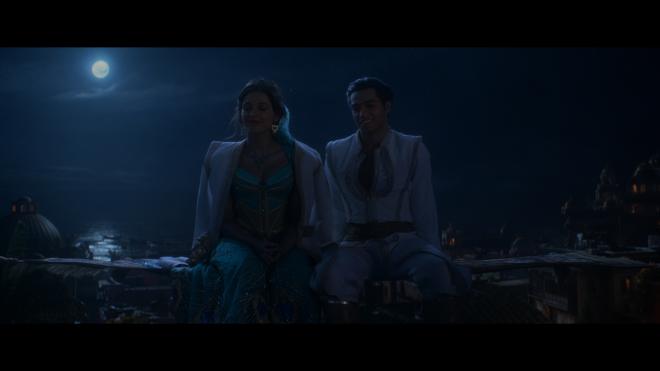 Compared to its dearly beloved predecessor, Aladdin (2019) is a pointless remake, and on its own, the Guy Ritchie production is ultimately a mediocre musical fantasy. With only Will Smith, Naomi Scott and the eye-catching stage production casting a hypnotic spell, the live-action adaptation of yet another of Disney's animated classics is terribly lacking the magic necessary to make it truly memorable. The film takes audiences on a magic carpet ride through 4K Ultra HD with a great-looking HDR10 presentation that doesn't really soar any higher than the Blu-ray while the Dolby Atmos soundtrack provides a slight improvement over its DTS-HD counterpart. Still, with a small set of bonus features, the overall UHD package is worth a look for fans and those curious to see Will Smith's take on the Genie.