Starring Eric Bana and Jennifer Connelly, Ang Lee's Hulk is essentially a superhero melodrama with heavily stylized editing that detracts from the plot's more weighty intentions. The favorite Marvel superhero smashes 4K Ultra HD with a stunningly gorgeous HDR10, an equally satisfying DTS:X mix but ports over the same set of supplements as before. Still, this UHD edition is a Highly Recommended addition to the MCU home video library.

The thought of seeing the name of a film auteur like Ang Lee attached to a comic book adaptation was an odd and surprising choice back in 2003. Sixteen years later, the celebrated filmmaker of such favorites as Crouching Tiger, Hidden Dragon, Brokeback Mountain and Life of Pi still makes for an interesting pick. His approach to making Hulk is more like a heavily-stylized, art-house experiment than a conventional superhero flick, an actioner heavy on character and dialogue centered around a melodrama about parent and child relationships. Eric Bana and Jennifer Connelly star as a pair of adults still dealing with the psychological pain caused by emotionally-distant, career-driven fathers, Nick Nolte and Sam Elliott. This, at least, is the film's strongest and best aspect, as it adds substance and gravitas to Bana's Bruce Banner's transformation into the Hulk resulting from repressed anger. However, Lee's visual experiment to reproduce the style of comics simply didn't work for this story and didn't translate well into a feature-length film, as the panel editing and motion graphics take away from any intended emotional impact. Today, Hulk is an oddity but still an intriguing watch. 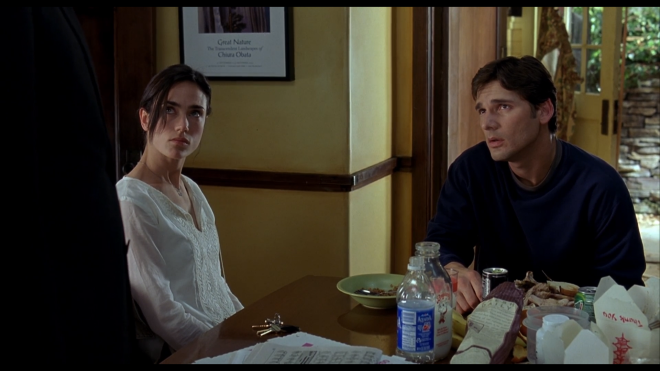 Universal Studios Home Entertainment brings Ang Lee's Hulk to 4K Ultra HD Blu-ray as a two-disc combo pack with a Digital Copy code. When redeeming said code via Universal's website or Movies Anywhere, users have access only to the 1080p HD version with Dolby Digital 5.1 audio. The triple-layered UHD100 disc sits comfortably opposite a Region Free, BD50 disc inside a black, eco-elite case with a slipcover. At startup, the disc goes straight to a static screen with the usual options in the top left corner and music playing in the background.

Originally shot on traditional 35mm film, the 2160p transfer from a 4K digital intermediate flexes its muscles right from the start, flaunting razor-sharp definition for a majority of the runtime. Every nook and cranny inside the Banner houses, the lab and military offices are plainly visible, and the smallest stitch and thread in the clothing is highly detailed. Even from a distance, certain features of San Francisco streets are more distinct, and viewers can better make every pebble and crevice of various rock formations in the desert action sequences. Facial complexions, especially, are exceptionally striking, revealing every pore, wrinkle and negligible blemish with remarkable lifelike textures in the entire cast. Unfortunately, the 2003-era CGI has not aged well, making some of the action look noticeably softer and distractingly cartoonish. There is also some very mild aliasing along the sharpest edges, such as Hulk's escaped from Desert Base and in the lettering and graphics of some monitors.

Notwithstanding, the 4K video presentation continues to dazzle with improved contrast and brightness, supplying the action and Frederick Elmes' photography with an appreciable and resplendent pop. In truth, it's not a hugely dramatic jump from the HD version, but whites are slightly more radiant and luminous throughout. The more significant boost and gain are the specular highlights, showing a much tighter and narrower glow in the brightest spots with distinct differences and better visibility within the hottest spots, such as in the light fixtures or when David and Bruce confront each other right before the climactic battle. The sunlight glimmers and reflects off water, faces and various metallic surfaces with realism and better clarity. At the same time, black levels are richer and more full-bodied with excellent gradations between the lighter and darker portions, providing the 1.85:1 image with a beautiful cinematic appeal. However, much of the picture also falls slightly on the darker side with the blackest corners engulfing some of the finer details, just a tad.

Still, this HDR10 presentation rages on with a spectacularly gorgeous palette that is often stunning and captivating, displaying a sumptuously lush and notably richer array of primaries. Blues range from ecstatic cobalt during David Banner's electrifying transformation to deep indigo in other random objects and a lively cerulean of the sky while reds are more vibrant. The Hulk is interestingly a more flamboyant shade than in its HD SDR counterpart, looking almost neon shamrock, but the surrounding foliage is a fuller, more dynamic emerald green. Being an experiment to reproduce the look and feel of a comic book, Elmes' ornately animated cinematography also boasts some fantastically colorful secondary hues, especially some eye-catching magentas and vivid lavenders when David appears early on. Arguably, the better and more marked improvement is the rosier and healthier flesh tones.

Along with being awash in a nice layer of natural, film-like grain throughout, this HDR10 presentation of Hulk is an excellent improvement and the best the movie has ever looked. (HDR10 Video Rating: 94/100)

Repressed rage erupts onto home theaters with an exceptional and highly-engaging DTS:X soundtrack that delivers several notable improvements over its DTS-HD counterpart.

Starting with Danny Elfman's score during the animated opening credits, the object-based mix is ampler and more wide-ranging, displaying excellent separation and clarity in the orchestration. With the music also bleeding into the sides and top heights, imaging feels broad and spacious, exhibiting superb, detailed distinction in the mid-range and creating an absorbing half-dome soundstage. Background activity continuously keeps the visuals busy with plenty of ambient effects moving between the front channels, and dialogue is always precise and intelligible, never drowned out by the loudest segments. As expected, the low-end is robust and quite commanding in a couple of moments, providing the visuals and action with a palpable, couch-shaking presence.

The surrounds are also employed on several occasions, supplying the hulking battles with a greater, more immersive sense of space. Subtle atmospherics, like birds in the distance, the commotion of city traffic or the sounds of a bustling lab, bounce around the room with outstanding directionality, pulling viewers into the movie's more thrilling moments. The ceiling channels, on the other hand, are not utilized as often, such as when Hulk's first appearance triggers the sprinkler alarm. But when called into action in the second half, they are put to effective use, generating a satisfying hemispheric soundfield. Bullets whizz and ricochet in every direction, the debris from explosions sometimes rains down from above, helicopters speed overhead and the climactic battle delivers a welcomed sense of envelopment. (DTS:X Audio Rating: 88/100)

The same set of bonuses are ported over for this UHD edition but only available on the Blu-ray.

Back in 2003, celebrated film auteur Ang Lee tried his hand at adapting a favorite Marvel superhero in Hulk, starring Eric Bana in the titular role. Centered around a melodrama plot about children and parent relationships, the film is ultimately a dud due to the creative editing stylized after comic book panels, but in the end, the film nonetheless remains an oddly intriguing watch. Uncontrolled rage erupts on 4K Ultra HD with a stunningly gorgeous HDR10 presentation that dominates its Blu-ray counterpart and an equally satisfying DTS:X soundtrack. Porting over the same set of supplements as its predecessor, this UHD edition is a highly recommended addition to the MCU home video library.