A young man who survives a disaster at sea is hurtled into an epic journey of adventure and discovery. While cast away, he forms an unexpected connection with another survivor: a fearsome Bengal tiger.

How do you make a movie out of a book that contains virtually no dialogue, focuses on a single isolated character, features wild animals, and takes place almost entirely in the middle of the ocean? Just ask Ang Lee, who devoted four years of his life to bringing Life of Pi to the screen. The mystical story of a courageous young man who spends weeks adrift at sea in a small lifeboat in the company of a ferocious tiger enthralled readers around the globe, but proved to be a highly challenging motion picture project. Yet Lee, a visionary genius, worked tirelessly to craft a film of unparalleled beauty and brash innovation that captures the essence of the novel. Though the themes of Life of Pi are well worn, its fresh, often dazzling presentation and superior artistry elevate the movie to a rarefied plane and make it a must see.

Shakespeare wrote "the play's the thing," but in the case of Life of Pi, images speak louder than words. The inspirational tale surely possesses the power to move an audience, but the breathtaking visuals stir the soul. While I struggled to connect to the film's narrative and underlying philosophy, its gorgeous imagery instantly captivated me, and when I focused more intently upon it during a second viewing, my admiration for Lee and his crackerjack technical crew multiplied exponentially. Merging live action with heavy CGI is a tough task, yet Lee's feathers never seem ruffled, and the elegant lyricism that drips from every frame of Life of Pi - even during its intense action sequences - are a testament to Lee's enviable sense of space, motion, and composition. It's no wonder the film received 11 Academy Award nominations, including Best Picture, and won four Oscars, the most noteworthy of which was Lee's well-deserved prize for Best Director (the Ben Affleck snub notwithstanding). Almost all the nods came in technical categories, but that's where Life of Pi shines the brightest.

There's not much plot to the film, as it focuses squarely on the survival struggles of Pi Patel (Suraj Sharma), the son of an Indian zookeeper, who finds himself alone in a lifeboat with four of his family's wild animals after their freighter ship capsizes in the Pacific during a raging storm. Along with his father, mother, and older brother, Pi was in the process of moving to Canada (with animals in tow) to pursue a brighter future, but when the ship sinks and all human souls are lost at sea, Pi must live by his wits, rationing supplies and learning how to co-exist with an untamed Bengal tiger, docile orangutan, crippled zebra, and pesky hyena. Challenges galore test his faith and will, as Mother Nature, the ocean's ecosystem, and the disoriented animals both aid and abet Pi's arduous yet strangely wondrous and spiritually fortifying journey. 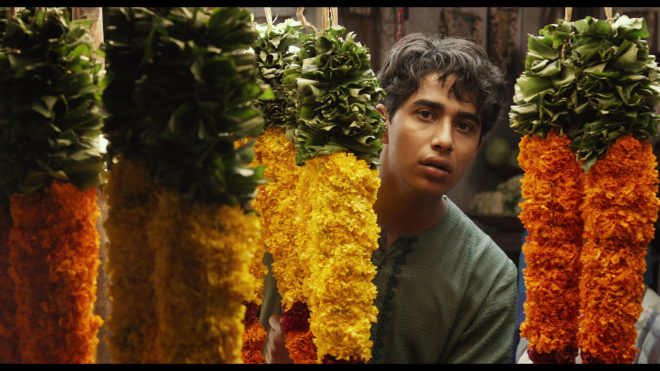 In many ways, Life of Pi reminds me more than a little of The Wizard of Oz in the way it takes a rebellious adolescent on a death-defying voyage of discovery (via a violent storm) and matches him up with members of a different species. Pi's ceaseless efforts to combat dire conditions and ultimately find safe harbor mirror Dorothy's struggles to return to Kansas, and the two mature through meeting various challenges and conquering assorted foes. Pi even comes upon an Emerald City of sorts when he briefly lands on a carnivorous island that's a verdant oasis in the vast oceanic expanse. The movie's payoff also eerily resembles the denouement of Oz, but I won't spoil that here.

And as Oz was a visual pioneer in its day, so is Life of Pi, which features amazingly beautiful (and Oscar-winning) cinematography and astounding special effects, including a CGI tiger that looks just as real as the sparingly used living specimen. The storms, shipwreck and fly fish sequences, and isolated shots of the seascape infuse the film with bountiful passion and artistry, while Lee's fluid camera work and well-pitched pacing lend it the lyricism of a tone poem. Whether or not you embrace the spiritual themes, Life of Pi quietly feeds the soul in the same manner as a fine painting or work of sculpture.

For someone who never acted before (or even knew how to swim), Sharma files an excellent portrayal, perceptively exhibiting the gamut of emotions Pi feels throughout the movie's course. It's a highly physical role, but Sharma handles the stunts well. The rest of the cast (which includes Gerard Depardieu in a small, but effective, role) also turns in thoughtful, understated performances, but all of them take a back seat to Lee's virtuoso work.

Life of Pi is an impressive technical achievement, but it's so beautifully shot and presented, the wizardry becomes invisible and we lose ourselves in the splendor of the moment. The story may not absorb you, but the visuals will instantly carry you away. More than a celebration of the human spirit, Life of Pi is a celebration of what movies can do and where they can take you, and from an artistic standpoint, this journey is unforgettable.

20th Century Fox Home Entertainment brings Life of Pi to Ultra HD Blu-ray as a two-disc combo pack with a flyer for a Digital HD Copy. At the moment, we are unable to verify if the correct size of the content, but the dual-layered UHD66 disc sits comfortably opposite a Region Free, BD50 disc inside a black, eco-cutout keepcase. At startup, the UHD goes straight to a main menu screen with full-motion clips, the usual options along the bottom and music playing in the background.

The survival adventure tale finds its way to the shores of Ultra HD aboard a gorgeous and often stunning HEVC H.265 encode, sure to make it the preferred way to ride these treacherous waves.

Shot on the Arri Alexa cameras, capable of up to 3K resolution, the transfer provides a noticeable uptick in definition and resolution. The individual hairs of both Richard Parker or Pi Patel are razor sharp and resolute, the tiniest scratch and blemish on the lifeboat is plainly visible, even from a distance, and the fine lines in the threading of the boat's coarse canvas covering are distinct beneath the water. Facial complexions expose negligible blemishes and pores with likelike textures, and the small veins of leaves and the rough, jagged edges of tree bark are very discrete and well-defined. Even during the many nighttime sequences, visibility remains strong and definite in the darkest portions of the frame.

Because of the way it was shot — aside from it being digital — much of the film comes with an unusual sterilized look that's more akin to a documentary. However, the photography of Claudio Miranda is simply spectacular, benefiting tremendously from the higher dynamic range. The 4K presentation displays a brighter, pitch-perfect contrast, giving the whites a intensely vibrant splendor. And with much of the story taking place in the open ocean, this is much appreciate, as every tiny detail in the background is as distinct as anything in the foreground. With superb specular highlights, the edges of objects glisten while the waters glisten and twinkle in the beneath the hot sun. This is all the better appreciated at night where blacks are richer and more opulent, but those same nights come with brilliant, sparkling stars and the ocean is teeming with various creatures that seem to glow in the dark.

Speaking of which, the wider color gamut is by far the biggest and most obvious improvement over its Blu-ray counterpart. Early on, viewers can enjoy deeper reds, more animated greens and vividly electrifying blues in either the flowers, the surrounding buildings or the beautifully colorful sarees worn by the women. In many of the same clothing, softer pastel hues — like shades of pink, cyan, turquoise and golden amber — are sumptuous and can easily serve as demo material. While stranded in the ocean, the morning clouds glow with variations of pink and magenta fading into smoky edges while the warm sunlight surrounds its area with intense orangey yellows that quickly dull into a faint shade of green before dissolving into a deep, bluish purple washing over the rest of the sky. The aforementioned sea creatures dazzle the water with a stunning spectacle of various colors surrounded by energetic blues, making this a gorgeous 4K presentation that fans and enthusiasts will want in their UHD collection immediately.

Ang Lee's shipwrecked journey through spiritual self-discovery ports over the same DTS-HD Master Audio 7.1 soundtrack as before, which is great but it also would have been nice to enjoy the film in either of the object-based formats (it was among the first titles to master Dolby Atmos theatrically).

On the other hand, the design still makes excellent use of the surrounds on various occasions, from the original score engaging viewers to the thunderous roars of a massive storm. When Pi is chasing after his crush through a street market, the chatter of the crowd is heard all around, and when stranded in the ocean, the silence makes for a chilling contradiction to the loud, ear-piercing tempest where the sound of pouring rain employs all seven channels. Occasionally, that silence is also broken by some of the sea creatures coming to the surface or the thousands of meerkats on the carnivorous floating island. The best moment, of course, is during the initial shipwrecked and the terrible storm which changed Pi's life forever.

It's doing such moments as well that we enjoy a broad and expansive soundstage where various effects fluidly pan between the three front channels. The mid-range is dynamic and extensive with distinct clarity between the quietest and loudest moments. Bass is not quite as effective given some of the imagery and action, but it's nonetheless potent with appreciable weight and presence. Vocals are precise and well-prioritized in the center, making this a fantastic lossless mix.

The same set of supplements from the 2D Blu-ray are ported over and only available on that disc.

A Filmmaker's Epic Journey (HD, 63 min): An exhaustive but also captivating four-part documentary that detail every aspect of the production, starting with the movie's genesis and the long process of adapting the novel. It also touches on the challenges, stage design, the performances and the CG technology & its implementation.

A Remarkable Vision (HD, 20 min): A more in-depth look at the production's technical aspects and the visual effects with special attention on some of the more challenging CG sequences.

Based on the fantasy adventure novel about spirituality through survival, Ang Lee's Life of Pi is an emotional and inspiring journey about a young man's self-discovery while overcoming hazardous challenges. Thanks to the latest in CG technology, the film is a lovely and thrilling accomplishment of cinematic art. Landing on the shores of Ultra HD, the 4K presentation is a dazzling feast for the eyes, offering a noteworthy improvement over its Blu-ray counterpart. Although it features the same excellent DTS-HD soundtrack and bonus material, the overall package is recommended.