Shazam! is a family-oriented superhero comedy that doesn't shy from more serious subject matters. The movie magically debuts on 4K Ultra HD with a gorgeous Dolby Vision HDR video and a near-reference Dolby Atmos mix, but only a few bonus features. The overall UHD package is Highly Recommended.

Being a lifelong comics fan, I never imagined seeing a hilariously entertaining and terrifically satisfying film adaptation of Shazam, the original Captain Marvel. But much to my surprise, Shazam! delivers an uproariously marvelous superhero movie. The character has never been as popular or as celebrated as others in the DC universe, so it was a shock to learn Warner Brothers was working on a standalone feature-length film about a troubled teen granted with the powers of ancient gods every time he uttered the magical word "Shazam." And as though taking a note from the MCU's efforts to adapt lesser-known serials like Guardians of the Galaxy, the filmmakers fully embraced the silliness of the premise and infused it with a great deal of heartwarming comedy and a subtle tongue-in-cheek awareness while also not shying away from more poignant subject matters.

One such aspect worth admiring in this story by Henry Gayden and Darren Lemke is the similar tragic backstory of our hero and the central villain. They are both damaged souls wounded by heartbreaking events involving their parents. But how they each deal with their respective childhood trauma is what makes this an interesting and engaging story. In one brief confrontation with his father and older brother, we see Thaddeus Sivana deprecated and maligned before being further undervalued when summoned by an ancient wizard (Djimon Hounsou). The boy grows up to be the angry and obsessive Doctor Sivana (Mark Strong), one of Shazam's greatest archenemies who uses his intelligence and science to possess magic. Resentful and motivated by vengeance, he unleashes the Seven Deadly Sins. He's a man full of anger towards the world, who has essentially lost hope and confidence in humanity. 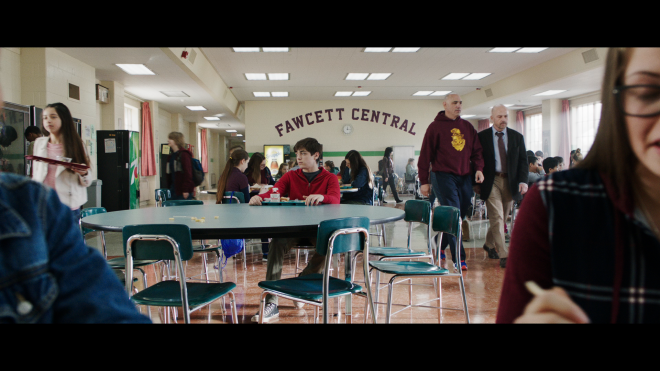 By contrast, runaway orphan Billy Batson (Asher Angel) still retains some semblance of hope despite the misfortunes he's had to endure and shown in his continued search for his mom. At his newest foster home with the Vasquez family, he acts the part of an embittered, cynical teen, but it's that little remaining bit of hope which proves otherwise. After defending his foster brother Freddy (a wonderful Jack Dylan Grazer) from a pair of violent bullies, Billy is magically teleported before Hounsou's wizard and chosen to instantly transform into an adult with superpowers, known as Shazam (Zachary Levi). One of many favorite moments in this charming farce is the interaction between Grazer and Levi and a good chunk of the story dedicated to two teenage boys testing Billy's god-like powers and other mischievous behavior. Better still, the filmmakers allow Billy's immaturity and instinct to run away from problems to be the central issue he must overcome, learning to trust in a family that wants him.

Adding to the amusement and fun of Shazam! are the several allusions to the original comics, from the plainly obvious to very subtle Easter eggs, littered throughout the movie's 132-minute runtime. Not only do the filmmakers make a point of integrating this story into the larger DC Extended Universe in delightfully clever ways, but they also drop hints of future installments when seeing Mister Mind wriggling inside a glass case or Hounsou's wizard summarizing Black Adam's backstory. Playing a bit of fan service is the plush tiger dolls referencing Mister Tawny, the Crocodile-Men playing poker and the school named after Fawcett Comics. Director David F. Sandberg -- whose involvement honestly worried me after the terrible Annabelle: Creation and Lights Out -- handles the silliness in witty fashion, even throwing a couple nods to the Annabelle doll and Penny Marshall's Big. Along with Wonder Woman and Aquaman, this inclusion to the DCEU finally feels as though the franchise is heading in the right direction.

Warner Home Video brings Shazam! to Ultra HD Blu-ray as a two-disc combo pack with a flyer for a Digital Copy. When redeeming said code via WB.com and Movies Anywhere, users unlock the 4K UHD version in Dolby Vision HDR with Dolby Atmos. The triple-layered UHD100 disc sits comfortably opposite a Region Free, BD50 disc, and both are housed inside a black, eco-cutout case with a shiny slipcover. At startup, viewers are taken to a static screen with the usual options along the bottom and music playing in the background. 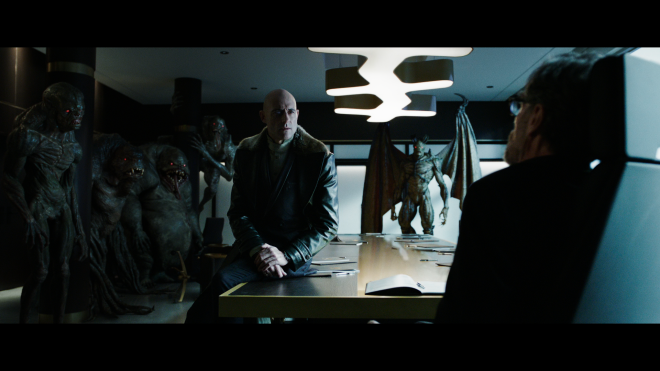 Shazam! crashes onto Ultra HD with a fantastically awesome HEVC H.265 encode that flexes some notable enhancements over the Blu-ray along with a couple of not-so-super moments.

The superhero flick was shot entirely on the Arri Alexa camera system capable of 3.4K resolution, but those elements were likely mastered to a 2K digital intermediate, given the heavy amount of CG visuals throughout. Still, the upscaled transfer shows a welcomed uptick, displaying a tad more definition in the unique features of the foster home, buildings and the Rock of Eternity temple. Background information is clearer and more distinct while the details in clothing are sharper, such as the little fuzz in Billy's jacket collar or Freddy's knit cap. We can also better make out the ornate design and threading in Shazam's costume. Sadly, there are several instances of mild aliasing along the sharpest edges, like the windows of buildings in extreme wide shots, the blinds and in some graphics on screens. Also, the yellow glow from Shazam's lightning bolt reveals some noticeable banding.

Overlooking that, the 4K video boasts a significantly improved contrast, giving Maxime Alexandre's photography a brighter, more spirited appeal throughout. The intended downcast, winter feel of Philadelphia still comes through, but whites are resplendent and more brilliant with intensity, such as Shazam's cape or whenever he shoots lightning with his hands. Specular highlights arguably don't enjoy as much of a dramatic jump, but the brightest spots nonetheless radiate with a crisper, narrower luminosity with slightly better detailing. Prime examples of this are, again, the scenes with lightning, but there's also the incandescent glow in the ancient wizard's staff and around the Eye of Sin orb. Black levels are also inkier and truer than in HD with velvety shadows that penetrate deep into the screen, providing the 2.40:1 image with excellent dimensionality and a lovely cinematic appeal. Along with the enhanced contrast and strong highlights, the Philly skyline at night is a gorgeous, photo-realistic sight.

The biggest and most appreciable upgrade in this Dolby Vision HDR presentation is easily the improved color gamut. With wider, more dazzling variation throughout, the primaries are richer and more sumptuous, particularly the reds and blues associated with specific characters. Billy's sweater is a lustrous crimson red while Shazam's costume is a distinctly deeper, animated cherry shade, and the Sins' eyes glow a neon rose. Likewise, Freddy's jacket is a vibrant cobalt shade to differentiate it from Dr. Sivana's more menacing yet electrifying blue. Meanwhile, Shazam's lightning bolt is a buttery yellow that fades to white in the center while other aspects of his costume like the bracelets are a deep, golden marigold. Other secondary hues also benefit and are just as mesmerizing, such as the warm orangey lights of the foster home and the climactic battle at the Christmas-themed carnival, showering the action with a stunning array of purples, magentas, and hot pinks. (Dolby Vision Video Rating: 90/100) 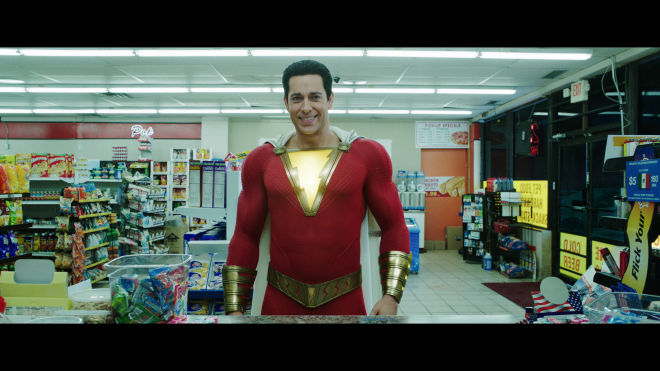 The magical superpowers of a loving family are shared with an equally exceptional Dolby Atmos soundtrack that is sure to thrill and inspire kids to be their own superhero.

The front soundstage is continuously welcoming and expansive, displaying a great deal of warmth with lots of background activity and movement between all three marvelously balanced channels. With outstanding fidelity and brightness, the mid-range displays precise clarity and definition, exhibiting superb separation between the mids and highs, delivering clean, detailed action sequences without falter or the slightest hint of distortion. Dialogue is clear and distinct in the center, even during the loudest segments. The low-end is impressively powerful and accurately responsive with a few authoritative moments that provide the story some commanding weight and presence, especially when the Sins make an appearance.

Speaking of those monsters, their voices echo and resonate from above, giving them amusingly creepy proximity as though floating directly atop the listening area. In fact, when they glide in this smoky apparition form, they move and circle about the room with outstanding directionality, creating an awesome sense of envelopment. The overheads appear more reserved for intense action sequences, such as the thunder strike from Billy's transformation into Shazam, when debris scatters everywhere or the climactic battle when everyone is flying in every direction. Interestingly, the bustling commotion of city traffic is largely maintained in the fronts, leaving the surrounds noticeably lacking. Occasionally, a random effect, like a car horn or police sirens, is heard in the distance, but it's not enough to feel fully convincing.

Nevertheless, the best sequences in this object-based mix provide a few demo-worthy moments, such as the aforementioned final showdown, and a satisfyingly soundfield. (Dolby Atmos Audio Rating: 94/100) 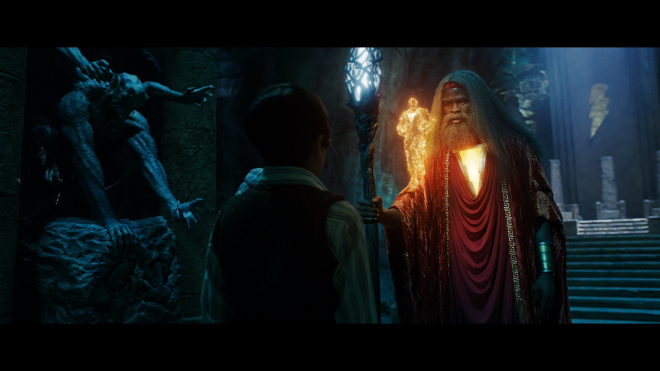 The supplements are only available on the accompanying Blu-ray disc. 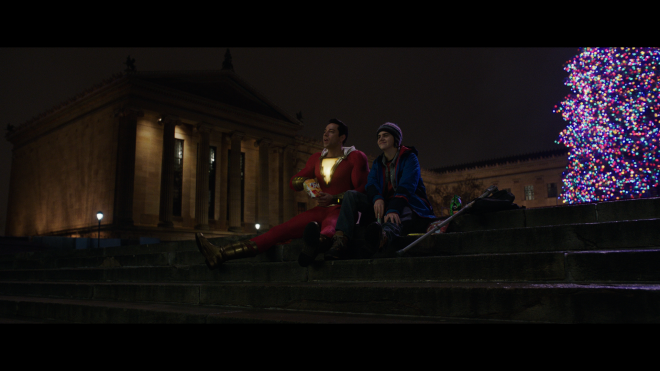 From horror filmmaker David F. Sandberg, Shazam! is an absolute hoot for the whole family with the promise of better things to come for the cinematic shared universe. The superhero magically appears on 4K Ultra HD with an electrifyingly gorgeous Dolby Vision HDR presentation that splendidly improves on its Blu-ray counterpart, joined by a fantastically satisfying, near-reference Dolby Atmos soundtrack. With the same set of supplements as the BD, the overall UHD package is Highly Recommended for 4K enthusiasts and anyone who wants to experience the best-looking version of the movie at home.

Sale Price 22.53
List Price 41.99
Buy Now
3rd Party 7.47
In Stock.
See what people are saying about this story or others
See Comments in Forum
Previous Next
Pre-Orders
Tomorrow's latest releases