In James Wan's capable hands, Aquaman swims ashore with spectacular action sequences, dazzlingly striking visuals and an awesome performance by Jason Momoa, a welcomed and fun course-correction for the DCEU franchise. The standalone sequel saves the Ultra HD oceans with a reference-quality Dolby Vision HDR presentation and demo-worthy Dolby Atmos soundtrack, but a small set of supplements. Still, the overall package is Recommended for enthusiasts hungry for more HDR goodness. (We have also reviewed the Blu-ray and 4K Digital releases.)

Along with Patty Jenkins's Wonder Woman, the DC Extended Universe may finally be hitting its stride in Aquaman, delivering just the right balance of action and comedy. While tackling bleakly somber themes — which frankly, are none too subtle — Warner Bros discovers superhero movies can still be fun, full of life and satisfyingly entertaining. And it would seem as though all the franchise needed was someone other than Zack Snyder steering and course-correcting the direction of this massive ship into better waters. Here, James Wan sits at the helm, and once again, he surprises with a talent for creating visually-mesmerizing spectacle, much like he did when sitting at the driver's seat of Furious 7. Granted, the plot can feel needlessly convoluted at times — do we really need Atlantean politics explained to us by an aquatic Ivan Drago? — but overlooking some relatively small hiccups, the latest DC entry is simply a good, popcorn-munching time at the movies.

And when looking at the dark, dreary path the series was going — slowly meandering into a joyless forest to dig its own grave — this action-packed, colorfully-vibrant adventure tale is exactly what the DCEU needs. And as it turns out, the franchise also needed the sarcastic, bewitching smirk of Jason Momoa, who quickly rose to prominence after his memorable turn as Khal Drogo in HBO's Game of Thrones. The actor brings a sly comedic charm and cynicism to the titular character, a meta-human who wants to protect humanity without really participating in it and couldn't care less of his ancestry but still carries a colossal chip on his shoulder. This makes for an interesting origin story that actually functions more as a sequel to the events of Justice League, following our reluctant hero on an odyssey to claiming his rightful place as a superhero from Atlantis. All the while, he scoffs at the notion that's precisely what he's doing in order to stop a cataclysmic war between humans and Atlanteans. 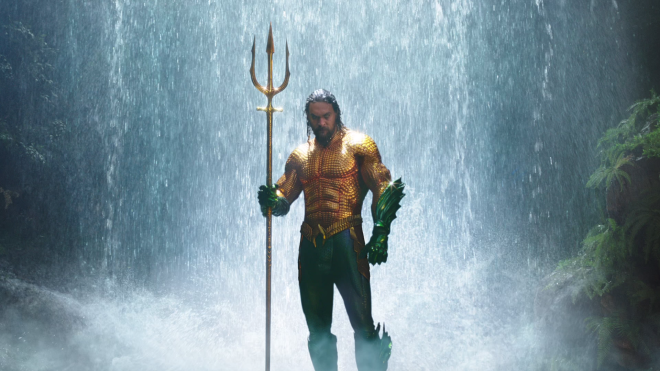 As much fun as it is hearing Momoa's Arthur Curry's sneering, occasionally immature comments — to the surprise of everyone, especially Amber Heard's Mera — the script from Wan and three others can somewhat drag in a few areas. The story makes blatant allusions to the Pinocchio fairy tale even though the filmmakers clearly take more inspiration from the King Arthur legend, but its execution ultimately feels like a retread of The Sword in the Stone. We can sense the writer's adherence to The Hero's Journey template, sometimes literal, as when entering the cave to retrieve the Trident of Atlan, Nuidis Vulko (Willem Dafoe) as the mentor and Mera as the doubting ally. However, it's not until well over an hour Arthur is finally sent on his adventure after confronting his half-brother and ruthless tyrant Orm (Patrick Wilson). Then, there's Black Manta (Yahya Abdul-Mateen II) as another villain with a subplot deserving its own film and tests Arthur into performing super-heroics.

In spite of this, Wan nonetheless manages to keep the action going in mesmerizing fashion, even when Arthur and Mera as simply wandering the globe searching for clues in tongue-in-cheek Indiana Jones style. However, I'm pretty sure audiences could probably do without the couple eating rose petals in Sicily and Nicole Kidman's scenes outside the prologue feel like a bathos nosedive. Still, Aquaman is arguably the best-looking installment in the DCEU, which is not in any way a snub to the superior plot of Wonder Woman. But from the start, Don Burgess's photography hypnotizes with charming photorealistic landscapes of the Curry lighthouse by the shore and picturesque sceneries of the wildly-imaginative underwater cities. The CG action sequences, too, as remarkable to behold with a few haunting scenes as though ripped straight from the comics. With a good storyline, fantastic performance by Momoa and extraordinary visuals, Aquaman is a submerged freight car of fun.

Warner Home Video brings James Wan's Aquaman to Ultra HD Blu-ray as a two-disc combo pack with a flyer for a Digital Copy. When redeeming said code via WB.com and Movies Anywhere, it includes the SD, HDX (1080p) and 4K with Dolby Vision and Dolby Atmos on various streaming platforms. The triple-layered UHD100 disc sits comfortably opposite a Region Free, BD50 disc, and both are housed inside a black, eco-cutout case with a glossy slipcover. At startup, viewers are taken to a generic static screen with usual options along the bottom and music playing in the background.

The Marine Marvel swims the treacherously rough and choppy oceans of Ultra HD with a spectacularly marvelous HEVC H.265 encode that blows its Blu-ray counterpart out of the water, making it the definitive choice for enjoying this latest DCEU installment.

Shot on the Arri Alexa camera system capable of to 3.4K resolution but later mastered to a 2K digital intermediate, overall definition and clarity doesn't quite make a massive jump over the HD version, largely looking about the same actually. Nevertheless, the upscaled picture enjoys a welcomed uptick throughout, revealing every pore, wrinkle and blemish in the face of the cast, especially during close-ups, and we can still make out the smallest detail in the remarkable production design. Arguably, the stitching and threading in the Atlantean costumes, the thick nylon belts and the minute flaws in the various weapons are a tad sharper, and the many CG battle sequences are distinct. However, the difference is relatively small with some mild softness in a few areas compared to the best moments, and occasionally, the sharpest edges waver from a short distance.

On the other hand, the primary reason we're swimming these hazardous waters is ultimately where the freshly-minted 4K transfer decidedly wins and earns the title of reference-quality. With enhanced contrast, the video looks significantly brighter and immensely more vivid. Crisp, pitch-perfect whites radiate with an intensity that will not only marvel viewers with spectacularly dynamic and striking screensaver moments but will also be squinting at the screen much like the amphibious monsters of the Trench. Specular highlights in the sunrise, explosions and underwater cities come with a gorgeous lustrous glow while watery surfaces, metallic edges and various sparks have a dazzling, glistening quality to them. Meanwhile, black levels are inkier and richer, particularly underwater where dark, stygian shadows penetrate deep into the screen. Visibility of background details remains exceptional, providing the image with a three-dimensional feel and a stunning cinematic appeal.

On top of the superb contrast and brightness balance, the 2160p video also swims to the surface with an astonishing, diverse assortment of colors, affording owners one demo-worthy moment after another. With Dolby Vision HDR at the helm, Don Burgess's cinematography benefits considerably, displaying a better, more improved palette all around. The glowing neon lights of the underwater cities range from hot fuchsia pinks and cotton-candy taffy to vibrant lavender, violets, and spirited lilacs while showered in distinctly different canary yellows, marigolds, and buttery lemon tones. Explosions and the climactic battle come in a mesmerizing parade of fiery reds, deep tiger oranges, and honey ambers. Better still, the blues are incredibly varied, such as the Atlantean technology glowing in teal, cyan and electrifying admiral shades, and the reds have a deeper, ruby shade in many areas. Overall, this a jaw-droppingly gorgeous 4K presentation sure to wow everyone.

Also worth noting, the presentation is not CIH friendly, alternating between aspect ratios often intended for IMAX screens but not actually shot in that format. To be perfectly honest, a majority of the movie and the underwater action sequences are in 1.78:1 widescreen, making the 2.39:1 anamorphic scenes rather moot and questionable, so owners will want to just stick with and use their 16:9 screens to better enjoy the movie. (Dolby Vision Video Rating: 96/100)

The latest DC entry saves the oceans from chaos thanks to a marvelously spectacular Dolby Atmos soundtrack, sure to give the audio system a healthy and exhaustive workout. Only, be sure to select the object-based option as the disc defaults to the DTS-HD MA 7.1 alternative.

Immediately in the opening prologue, the tumultuous deluge of an oncoming thunderstorm fills the room, as raindrops are distinctly heard falling all around the listening area. Afterward, the rest of the design is continuously busy with various atmospherics flawlessly panning in the surrounds during quieter, dialogue-driven sequences, from squawking seagulls and the wind blowing in the distance to fish swimming everywhere. Of course, when the movie erupts into action, debris from explosions rains down from above and the roar of soldiers come from every direction. Better still, the beating and swashing of water in underwater scenes are incessant in the overheads, sides, and rears, generating a hemispheric soundfield that's awesomely immersive and highly satisfying.

Keeping things awesomely engaging as those same ambient effects layering the visuals with fluid movement in the front channels and the top heights, generating a splendidly broad and spacious half-dome soundstage. The mix also comes with distinct clarity and superb definition in the mid-range, exhibiting superb detailing and separation during the loudest, ear-piercing segments. Meanwhile, Rupert Gregson-Williams' score enjoys the extra breathing room, displaying a great deal of warmth and fidelity with outstanding definition and distinction in every note and instrument while lightly bleeding to the overheads. Dialogue is crystal-clear and precise in the center, delivering excellent inflection and emotive intonation in the voices, even in the whispered, more intimate conversations. Most memorable is a powerful, varied and terrifically robust low-end, providing the visuals with a palpable magnitude that energizes the room, reaching impressive ultra-low depths in several scenes, especially the climactic battle (bass chart). (Dolby Atmos Audio Rating: 96/100)

Supplements are the same as the accompanying Blu-ray and can be enjoyed on both discs.

Like other entries in the DC Extended Universe, Aquaman lands ashore with its fair share of mild rubbish floating in the water, but thankfully, its recycled story of the King Arthur legend is set free from the net by spectacular action sequences, dazzlingly striking visuals and an awesome performance by Jason Momoa. In the hands of the capable James Wan, the action adventure tale is buckets of popcorn-munching fun and similar to Wonder Woman, course-corrects the series in the right direction. The standalone sequel swims the choppy shores of Ultra HD with an outstanding, reference-quality Dolby Vision HDR presentation that bests its Blu-ray counterpart and a marvelous, demo-worthy Dolby Atmos soundtrack. With a small but nonetheless enjoyable set of supplements, the overall package is recommended for everyone and UHD enthusiasts hungry for more HDR goodness.

Sale Price 18.99
List Price 41.99
Buy Now
3rd Party 14.12
In Stock.
See what people are saying about this story or others
See Comments in Forum
Previous Next
Pre-Orders
Tomorrow's latest releases