Although not quite as effective or feeling as humorously clever as its predecessor, The Lego Movie 2: The Second Part is nonetheless a strong, wonderfully entertaining follow-up sure to satisfy the imagination of kids everywhere. On Ultra HD, the animated sequel rebuilds with a near-reference 4K HDR10 presentation, a fantastic Dolby Atmos soundtrack and the same bonus material as the Blu-ray, making the overall UHD package a Recommended for the whole family.

Picking up literally where its predecessor left off, The Lego Movie 2: The Second Part almost feels determined to prove that being nonsensically wacky and absurdly over-the-top can be funny and entertaining so long as it is also childishly witty, amusingly self-knowing, and cleverly referential. And this is the filmmakers' most essential ingredient — and most dependable weapon — in building this meta, postmodern adventure comedy into a popular and successful family franchise. Essentially, this sequel is intertextuality taken to the extreme but brilliantly without seeming as though it is. For crying out loud, the actual story proper takes place five years after the cold open, which functions as a reference to the real time it took to finalize and release this production while also serving as an important element to the plot's theme and characters. On top of that, one can't help but imagine the filmmakers were perhaps granted early access to the script of Avengers: Endgame for one more nod with the time lapse.

Of course, that last part is a far-fetched possibility, but it's not without good reason for thinking it. The animated film's title alone is little more than a tongue-in-cheek gag where repetitiveness is simultaneously a source of humor and a promise of the sort silliness in store. Meaning, audiences should expect 100-minutes of goofy allusions and dopy double entendres, and it definitely delivers on that front. In the aftermath of the Duplo alien invasion, Bricksburg becomes a post-apocalyptic wasteland à la George Miller's Mad Max: Fury Road with a voiceover by Wyldstyle (Elizabeth Banks) channeling Tom Hardy's titular portrayal and brooding darker than her usual brooding. Meanwhile, Emmet (Chris Pratt) remains the same upbeat, happy-go-lucky but ultimately naive lad as before, unchanged by the devastation. This is a source of contention for the couple because apparently, seeing the bright side of things and being hopeful in light of the impending "Armamageddon" is not an attractive feature. 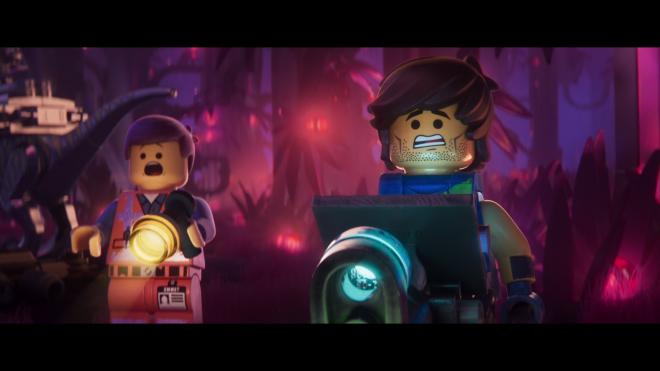 Later, while on a rescue mission to save his friends from a doll named General Mayhem (Stephanie Beatriz) and Queen Watevra Wa'Nabi (Tiffany Haddish) of the Systar System, Emmet's heroic journey is undermined by the fortuitous chance meeting of the rugged and ruggedly handsome Rex Dangervest (also Pratt). And herein lies the issue. Everything about the character is a jumbled ball of references begging to be unwrapped for better appreciating the overall joke, from his introduction as the "galaxy-defender, archaeologist, cowboy and raptor trainer" to the rapid-fire quips about time-traveling. Admittedly, encapsulating Pratt's sudden rise to superstardom, from his plumpier role on Parks and Recreation to his more strapping, athletic physique in Jurassic World, is cleverly funny without seeming labored. However, this laundry-list mingling of various satirical jabs also inadvertently embodies a minor conundrum in a plot that knowingly employs the references as a build-up to a heartfelt theme.

On the one hand, the allusions are continuously clever and endlessly amusing, enough to keep audiences engaged and invested, but on the other hand, the constant barrage of jokes littering The Lego Movie 2: The Second Part distract somewhat from the plot's emotional payoff. Much like the title itself, which it is at once a rib-tickler that can just as quickly lose its appeal, the animated sequel is brimming in optimism and charm, but after a while, the torrent of intertextual details, especially as the primary source of humor, become the main attraction. Eventually, our focus is drawn to anticipating each subsequent allusion, of looking for the next cultural reference and made much too aware of them, which honestly, undermines and diminishes the film's intended impact at the climax. Or, at least, it does for me. Don't get me wrong. Lego Movie 2 remains a great deal of fun and a strong follow-up to its predecessor, but in the story that only implies progress and growth, the conclusion lacks poignancy and weight, ultimately coming off forced and overly-sentimental.

Warner Home Video brings The Lego Movie 2: The Second Part to Ultra HD Blu-ray as a two-disc combo pack with a flyer for a Digital Copy. When redeeming said code via WB.com and Movies Anywhere, it includes the SD, HDX (1080p) and 4K UHD with Dolby Vision and Dolby Atmos on various streaming platforms. The dual-layered UHD66 disc sits comfortably opposite a Region Free, BD50 disc, and both are housed inside a black, eco-cutout case with a glossy slipcover. At startup, viewers are taken to a generic static screen with usual options along the bottom and music playing in the background.

Upscaled from a 2K digital intermediate, the freshly-minted 2160p transfer enjoys a welcomed uptick in overall definition but it's not a drastic jump from the Blu-ray. Still, viewers can make out more tiny details on each interlocking block, such as the textural bumps along the walls or the slight wear and tear around the studs. The most trivial detail, tiny nuance in the background is as sharply-defined as any object in the foreground, and minor blemishes -- like the scratches around Emmet's vest or along the stripes of Wyldstyle's all-black outfit -- are also a bit more apparent and distinct. Even from a distance, the fine lines along each block, building design, and landscapes are arguably a tad more detailed.

However, the real upgrade in this HDR10 presentation is a spectacularly awesome color palette that is often stunning and jaw-dropping. Right from the moment Emmet's peace-offering is devoured, the action becomes a dazzling, hypnotizing feast for the eyes. Granted, the movie proper opens on a desolate, Mad Max wasteland, saturated in dynamic, true-to-life yellows, golden ambers, and various earth tones. But the ensuing battles throughout light the screen with spirited bursts of hot bubblegum pinks and brilliant purples mixed with electrifying cobalt blues. Other primaries are also notably richer and fuller, yet the showstopper is every scene in the Systar System, brimming with a boldness and vitality that splendidly adds to the lighthearted humor of the story. This imaginary land of love and kindness boasts a sumptuous array of violets and periwinkles, fuschia and cotton-candy pinks, and a crazy, energetic mix of arctic blues, cerulean and navy, making for a mesmerizing adventure tale.

The excitement continues with an improved contrast that's right on the money, allowing for remarkable visibility of the most minute feature and facet in the far distance. Whites are radiant and ecstatic with brilliant luminosity, providing the fluffy clouds an amazing, realistic glow and surprisingly revealing a bit more clarity within the hottest spots, such as when the sun's rays glisten along a character's face or hair. In fact, specular highlights are simply outstanding, looking significantly tighter and narrower than its HD SDR counterpart, which again, is greatly appreciated when entering the overly-jubilant world of the Systar System where everyone loves to break out into a song and dance number. Black levels are immensely richer and silkier while also displaying excellent gradational differences between the various shades. Inky dark, velvety shadows maintain extraordinary visibility within the darkest corners, providing the 2.39:1 image with a beautiful three-dimensional, cinematic quality. (HDR10 Video Rating: 92/100)

The rescue mission, betrayals, and ultimately bonkers plot boasts an equally fantastic Dolby Atmos soundtrack, sure to suck viewers into the gonzo adventure right from the beginning.

As the Lego-ized production logos appear on screen, the music quickly swells and bleeds across the front three channels and into the top heights, immediately establishing a half-dome soundscape where the rest of the movie is mostly maintained. This means there's not much going on in the surrounds or through the other heights for a decent chunk of the runtime, and the lack of activity is occasionally evident enough to mildly draw away attention, given some of the most outlandish silliness. That's not to suggest the design doesn't come with its share of appreciably enveloping moments. When the action erupts on screen, many effects discretely move and pan across the overheads, but it's not quite as aggressive to feel convincing, immersive or as active as the animated visuals would suggest. On the other hands, there's plenty of movement in the sides and rears to generate a very satisfying 360° soundfield.

All things considered, the CG-animated sequel nonetheless makes for an awesome listen at home, kicking off with a highly-engaging and terrifically welcoming soundstage. Imaging is continuously broad and spacious as background activity travels between the channels and into the off-screen space with immaculate, fluid movement and balance. The mid-range is extensively dynamic and far-reaching, exhibiting superb definition and separation in the highs and mids with perfect crystal clarity. As mentioned above, Mark "DEVO" Mothersbaugh's score arguably enjoys the most benefit from the object-based format, displaying superbly sharp, detailed differentiation within the orchestration and keeping the visuals lively throughout. Although the low-end is generally of the mid-bass variety, it's nonetheless robust with several hearty, palpable moments in action sequences and the music. With well-prioritized and intelligible vocals throughout, the Atmos track makes for a fun and engaging mix. (Dolby Atmos Audio Rating: 88/100)

The Ultra HD features the same set of supplements as the accompanying Blu-ray.

Despite being a strong and worthy follow-up, The Lego Movie 2: The Second Part isn't quite as effective and even somewhat diminishes the conclusion's intended emotional impact. The animated sequel rebuilds on Ultra HD with a gorgeously awesome 4K HDR10 presentation that delivers a more vibrant feast for the eyes than its Blu-ray counterpart and an awesomely fantastic Dolby Atmos soundtrack. The same set of supplements are shared between both formats, making the overall UHD package a recommended addition to the library.

Sale Price 24.99
List Price 33.99
Buy Now
3rd Party 8.23
In Stock.
See what people are saying about this story or others
See Comments in Forum
Previous Next
Pre-Orders
Tomorrow's latest releases