Celebrating its 25th Anniversary, Renny Harlin's adventure thriller Cliffhanger remains a wildly entertaining action blockbuster with memorable performances by Sylvester Stallone and John Lithgow. Thanks to a brand-new 4K remaster, the film climbs the highest peaks of mount Ultra HD equipped with a superb HDR10 presentation and a marvelous Dolby Atmos soundtrack, but only the same set of supplements as before. Nevertheless, the package is Recommended for both fans and UHD collectors.

(Written by David Krauss for his review of the original Blu-ray.)

I must confess, I've never been much of a Sly Stallone fan. Of course, I love Rocky (who doesn't?), and as sequels go, Rocky II is pretty good as well, but Stallone's dumb lug, bulging bicep, superhuman screen persona always seemed cartoonish to me, and his incessant milking of the Rocky and Rambo franchises long after the wells had run dry seemed more about fueling his ego and padding his coffers than producing cinematic art. Yet despite my aversion to Stallone, I must also confess a special guilty fondness for Cliffhanger, a testosterone-infused, over-the-top action movie that showcases the star to his best advantage while providing nonstop thrills set against a breathtaking alpine backdrop. Director Renny Harlin keeps our adrenaline pumping while reining in Stallone, who files one of his most natural and sensitive portrayals, displaying an attractive vulnerability and a bit of uncharacteristic weakness that make him seem like less of a Neanderthal than usual.

Eight months after a tragic accident for which he holds himself responsible, a guilt-ridden Gabe Walker (Stallone) returns to the Colorado ranger station where he once worked as a rescuer in the hope of rekindling his romance with colleague Jessie Deighan (Janine Turner), who resents his self-pitying, hide-from-the-world attitude. As the couple tries to hash things out, a distress call comes in from a stranded party lost high in the mountains, and Jessie urges a reluctant Gabe to confront his demons and jump back into the fold. Yet little does Gabe know he's walking into a trap set by the villainous Eric Qualen (John Lithgow), whose plot to steal millions from the U.S. Treasury has hit a horrific snag, and he needs the expertise of experienced mountain men to find a trio of cash-filled attachés scattered over miles of icy terrain. What follows is a desperate hunt, as Gabe and cohort Hal Tucker (Michael Rooker) try to outwit Qualen and his ruthless henchmen, protect Jessie, and save their own skins.

Cliffhanger is one of those check-your-brain-at-the-door, buckle-up-and-enjoy-the-ride blockbusters packed with enough well-choreographed action to leave even the genre's most discriminating connoisseurs breathless. The breakneck pace never flags, so there's no time to ruminate over the silly story or question the viability of some of the death-defying stunts. And the humdinger of an opening – a harrowing rescue attempt that transpires atop an 8,000-foot-high rocky dome – packs such a wallop, Harlin spends the rest of the film frantically trying to top it. He never quite succeeds, but strings together a slew of riveting, white-knuckle sequences, most of which strain credulity, but provide plenty of bang for our entertainment buck. From the dramatic mountain scenery and violent confrontations to fiery explosions, an avalanche, and the animated (and, at times, deliciously campy) performances of the first-rate cast, Cliffhanger stokes the senses for almost all of its 112-minute running time. 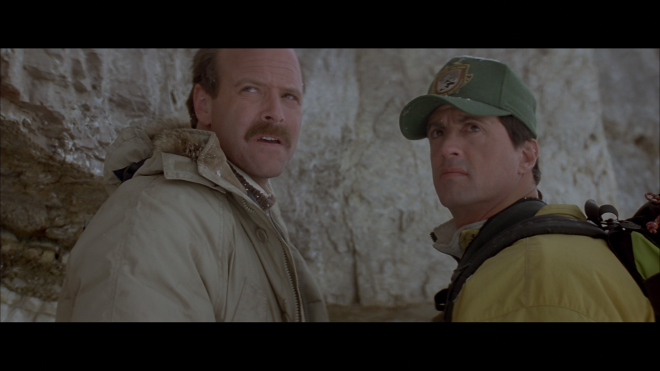 One of the most impressive things about Cliffhanger is the high quotient of real stunts and shots. Harlin used blue screen technology sparingly to enhance the action sequences, so the bulk of the rock climbing, cable crawling, and aerial dives are performed by either the actors themselves or by nerves-of-steel doubles in high-altitude locations, and the authenticity adds considerably to the spectacle and tension. Such commitment to truth raises the film above others in its class, as do the stunning alpine vistas, which continually vie for our attention and ratchet up the impact of both frenetic and sedate scenes.

Stallone commands the screen well, but a strong supporting cast makes Cliffhanger feel more like an ensemble effort than a streamlined star vehicle. Lithgow is an absolute hoot as the suave, heartless Qualen, a bad guy in the Alan Rickman Die Hard mold who'll stop at nothing to achieve his goals. Lithgow knows just how far to push the envelope, and seems to relish both his dastardly role and going toe-to-toe with Stallone in a surprisingly physical climactic fistfight, in which he kicks some serious butt. The expressive Turner also asserts herself well, combining sensitivity with spunk, and creating a more comfortable romantic chemistry with Stallone than many of his other leading ladies. Caroline Goodall as Qualen's devilish partner in crime is another strong female presence, and The Waltons' papa, Ralph Waite, lends some quiet class and heart to the proceedings.

After such change-of-pace debacles as Oscar and Stop! Or My Mom Will Shoot, Cliffhanger marked a return to form for Stallone, but the renaissance didn't last long, and this terrifically entertaining thriller arguably stands as the actor's last great movie. Of course, he'll always be remembered as Rocky and Rambo, but Cliffhanger remains a notable bright spot on the actor's otherwise lackluster résumé, and will continue to captivate action fans over repeated viewings for years to come.

Sony Pictures Home Entertainment brings Cliffhanger to 4K Ultra HD Blu-ray as a two-disc combo pack with a flyer for a Digital Copy. Said code can be redeemed via sonypictures.com or Movies Anywhere, giving users access to the HD version with Dolby Digital 5.1 audio. The dual-layered UHD66 disc sits comfortably opposite a Region Free, BD50 disc inside a black keepcase with glossy slipcover. The accompanying Blu-ray is the same disc as the 2010 edition with an identical HD video presentation and DTS-HD audio track. At startup, the disc goes straight to an interactive main menu that changes screens when switching between the usual options while music plays in the background.

Ill-prepared mountaineers mount a rescue mission outfitted with a shockingly beautiful and eye-catching HEVC H.265 encode that leaves previous home video editions struggling to make the climb. Reportedly coming from a brand-new 4K remaster and restoration of the original camera negatives, the fresh 2160p transfer shows markedly better definition and clarity overall, revealing far more than the previous Blu-ray. Granted, there are a few moments of blatant softness and the optical effects, such as the plane crash and the matte paintings, are more apparent than before, but they are easily forgiven as inherent to the source and when considering the majority of the picture looks so amazing. Fine lines and objects are distinct throughout, showing lots of detailing in the foliage, the clothing of characters and the tiniest pockmarks in the unique rock formations. Pores, wrinkles and minor blemishes are plainly visible with lifelike textures, and individual hairs are razor-sharp.

The most dramatic and notable upgrade is the brighter contrast, which not only makes the movie appear fresher and more rejuvenated but also makes the HD version appear paler and slightly duller by comparison. The white of the snow everywhere pops with an intense, true-to-life brilliance while allowing individual ice crystals to radiate and sparkle in the sunlight. Specular highlights are equally astonishing, giving the individual creases of fluffy clouds a resplendent glow, a realistic shine to wet surfaces, an energetic glimmer to metallic edges and a glistening bloom on faces without ruining the tiniest feature. Interestingly, brightness levels are not a massive jump forward, but the difference is nonetheless appreciable and quite satisfying, showering several sequences with slightly richer blacks and deeper shadows while maintaining exceptional visibility of background details. Along with a thin, fine layer of natural grain, the 2.35:1 image has a beautiful cinematic quality to it.

Although set outside in the open wilderness and mountaintops, Alex Thomson's cinematography has never really been particularly colorful on any home video format, favoring natural earth tones and a cold winter color scheme. Nevertheless, the 4K HDR10 presentation displays enough nuanced variations to appreciate and prefer this transfer over its HD SDR counterpart, starting with the deeper, more full-bodied greens of the surrounding forest, the bright cerulean blues of the sky and the arctic teals of the hardened ice. More surprising is seeing the rescue helicopter as if for the first time, now looking more of a ruby cherry red shade versus the bright orange seen on the Blu-ray. The rest of the photography enjoys a noteworthy boost in the yellows, tans and browns of the mountains and rocks, and facial complexions appear healthier with a lifelike peachy rosiness in the entire cast. This is, by far, the best the adventure thriller has ever looked. (4K HDR10 Video Rating: 92/100)

Taking fans to even greater heights is a fantastically thrilling, reference-quality Dolby Atmos soundtrack that totally blows away its DTS-HD predecessor and avalanches the listener within the first opening moments.

Every time helicopters make an appearance, the propeller blades can be heard directly above, or choppers flawlessly and convincingly pan through the ceiling channels from one side of the room to the other. When climbing the mountains peaks, the snowstorm and loud winds blow all around, encircling the viewer with the howls of the bitter cold weather while distinctly hearing the individual ice crystals moving across the sky. During quieter moments, the room is filled with a variety of ambient effects, like the rustling of leaves, birds chirping or crickets singing in the distance, are endlessly occupying the surrounds and the overheads, generating a splendidly immersive hemispheric soundfield. The echo of gunfire circles the listening area, and the sound of rain pours down everywhere.

The action continues to make the climb of mount Ultra HD many of those same atmospherics littering the visuals with lots of bustling activity that fluidly moves into the off-screen space and to the top heights, generating a splendidly broad and spacious half-dome soundstage. An extensive and dynamic mid-range exhibits superb clarity and definition during the loudest, ear-piercing moments, revealing exceptional distinction in the deafening explosions while also delivering outstanding warmth and fidelity in Trevor Jones' memorable score. Dialogue maintains top priority with excellent intonation, allowing viewers to better appreciate John Lithgow's impressive accent. Although not quite as aggressive as the visuals would imply, the low-end is nonetheless robust and palpable, providing some of the action with a strong room-energizing presence. (Dolby Atmos Audio Rating: 96/100)

The accompanying Blu-ray features the same set of supplements from nine years ago.

After twenty-five years, Renny Harlin's adventure thriller Cliffhanger remains a wildly entertaining and surprisingly memorable action blockbuster with excellent performances by Sylvester Stallone and John Lithgow. Sony Pictures celebrates the production's 25th anniversary with a brand-new 4K remaster of the original camera negatives. This new transfer mounts an absolutely outstanding rescue mission on Ultra HD, equipped with a superb HDR10 presentation and a marvelous, reference-quality Dolby Atmos soundtrack that blows away previous home video editions. Although porting over the same set of supplements as before, the overall package is nonetheless recommended.

Sale Price 14.66
List Price 30.99
Buy Now
3rd Party 23.98
In Stock.
See what people are saying about this story or others
See Comments in Forum
Previous Next
Pre-Orders
Tomorrow's latest releases