Not only will John McTiernan's Die Hard always be remembered for kickstarting Bruce Willis' movie career, but it will also live infamy for changing the action genre forever and continue being dearly beloved as the best Christmas-themed film ever made. Celebrating its 30th Anniversary, the classic seizes the top floor of the Ultra HD tower equipped with an excellent 4K HDR10 video presentation, an awesome DTS-HD soundtrack, and the same set of supplements, making the package Recommended for die-hard fans!

Over the last thirty years, John McClane has become such an iconic part of the action-film landscape that it's hard to remember a time when he wasn't etched in our pop culture consciousness. Starting with Die Hard, and continuing through four sequels, the character has proven to be one of the most durable in a very fickle genre. Aside from James Bond and Indiana Jones, there may be no other action movie hero who has lasted as long or remained as beloved by audiences. McClane redefined the boundaries of the action archetype, bringing warmth, humor, unpredictability, and an almost fanciful sense of masculine derring-do to the genre.

1988's Die Hard, of course, was the film that started it all, and it broke all preconceptions for what an action hero could be. Bruce Willis' John McClane is a NYC cop who has (reluctantly) flown to Los Angeles to reconcile with his upwardly-mobile wife (Bonnie Bedelia), but he ends up trapped in a skyscraper with a bunch of mercenary thugs led by the sniveling Hans Gruber (Alan Rickman). Simple premise, great action, airtight execution. And unlike the muscled action heroes of yore (this means you, Gov. Schwarzenegger), McClane is not a superman, but rather just an ordinary guy stuck in an extraordinary situation. His cocky facade masks a palpable vulnerability, but that only makes him even more courageous. By the time he gets around to kicking Gruber's ass at film's end, he's already rewritten every cliche in the action movie playbook.

Just wrapping up his run in TV's Moonlighting, Willis was at his hungriest in Die Hard, and he almost single-handedly carries the entire movie on his well-oiled shoulders. McClane's got more quips than James Bond and Freddy Krueger put together, but somehow Willis makes the character endearing rather than smarmy. Rickman is also the best villain of the entire Die Hard series, coming off as the kind of uber-nasty psycho who would stab you with a knife, lick off the blood, and then stab you again. And the seemingly incongruous pairing of Willis and Bedelia manages to generate real sparks, making us actually believe that this guy would risk everything to save his wife, instead of just another tired plot device. Add to that John McTiernan's economical direction and a breathless set of stunt sequences that still hold up, and Die Hard stands head-to-head with the absolute best action flicks of the '80s. 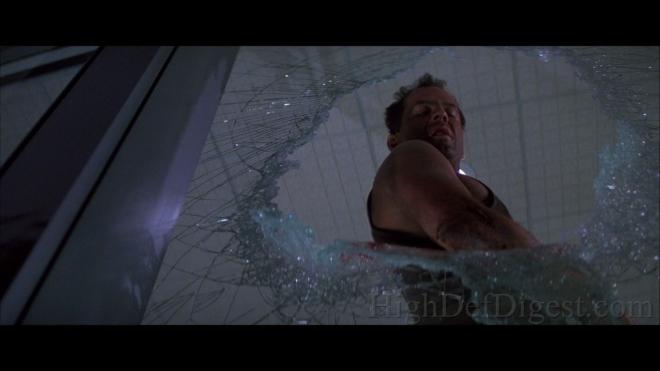 For a more in-depth take on the movie, you can read our review of the standard Blu-ray HERE.

20th Century Fox Home Entertainment brings Die Hard to Ultra HD Blu-ray as a two-disc 30th Anniversary combo pack with a flyer for a Digital HD Copy, which can be redeemed via FoxDigitalMovies.com but only available in HD / SDR and HDX on VUDU. The dual-layered UHD66 disc sits comfortably opposite a Region Free, BD50 disc inside a black, eco-cutout keepcase. At startup, the UHD goes straight to the main menu screen with full-motion clips, the usual options along the bottom and music playing in the background.

The holiday action classic rides to the top floor of the 4K Ultra HD tower with an excellent HEVC H.265 encode, offering devoted loyal fans a noteworthy improvement over its Blu-ray counterpart. The movie hasn't had the best history on home video, but this new 4K remaster is undoubtedly the finest and most beautiful it has ever looked. This UHD version straps a chair of C-4 to previous editions and blows them away in a massive explosion!

The 2160p transfer comes with improved definition and clarity throughout. It may not be the sort of night and day difference some may have been hoping for, but there is definitely a bit more detailing in the clothing and the very 80s design of the furniture decorating the offices. Facial complexions also appear slightly warmer and more natural, exposing pores and wrinkles during close-ups. However, the picture is riddled with several softer, blurrier sequences as well. Then again, this has always been an inherent quality of Jan de Bont's memorable photography, not necessarily a point of complaint. Also, there are a couple instances of very mild aliasing along the sharpest edges of stairs, windows and signs. For the most part, various objects within the darkest shadows of the background are fairly clear and visible, but occasionally, they can be obscured and shrouded due to some minor crush. Black levels are incredibly rich and inky, providing the 2.35:1 image with a gorgeous cinematic quality, but they can be so strong as to erase some of the finer aspects, such as the finer textures of Hans' expensive suits or some of the other buildings in the distance.

But overlooking those arguably negligible issues, the 4K presentation comes with improved, brighter contrast, delivering sharp, crisp whites in every scene. Not only is this apparent in the lamps and various light fixtures, which had a hotter, slightly yellowish appeal in HD SDR, but the several lens flare moments glow with a tad more radiance and brilliance. In those same moments, viewers can also appreciate the tight and narrow specular highlights, allowing for better clarity within the hottest, brightest spots, such as the rapid white bursts from gunshots, while also giving metallic objects a realistic glimmer. On the flip side, the overall palette doesn't receive a dramatic boost though admittedly, primaries are a tad more enthusiast and colorful with reds, in particular, looking deeper and more crimson. On the whole, secondary hues remain relatively the same, but the HDR transfer remains faithful to de Bont's original cinematography and creative intentions, making this the best the movie has ever looked and feeling very much like you're watching it again for the first time in cinemas.

20th Century Fox has opted to port over the same DTS-HD Master Audio 5.1 soundtrack heard on the Blu-ray and, while an object-based audio option would have been a much-welcomed upgrade, this lossless mix remains an excellent audio presentation for a 1980s action classic. And to be perfectly honest, I can't imagine a hemispheric option really offer much improvement without also feeling largely artificial. An appreciably wide soundstage showers the screen with a variety of background and off-screen activity that's continuously sharp and detailed, even during the loudest, ear-piercing moments. Dialogue is crisp and precise while the low-end is aggressive and robust. The surrounds are surprisingly busy with various discrete effects panning from one channel to the next, and even better, they truly come alive when applying the receivers' Dolby Surround or DTS: Neural:X up-mixing functionality.

Thirty years later and John McTiernan's Die Hard remains just as entertaining today as it was when I first saw it in theaters, full of hilariously wry comedy reminiscent of classic Hollywood mixed with the exaggerated explosive suspense of the modern era. The seminal action flick will always be remembered for kickstarting Bruce Willis' career and for changing the face of the genre, and on top of that, it remains the best Christmas-themed film ever made. On Ultra HD, the movie arrives as a 30th Anniversary edition with an excellent 4K HDR10 presentation, reportedly struck from a new remaster, and an identical DTS-HD soundtrack that sounds great when using the receivers up-mixing functionality. The same supplements are ported over, but the overall package is nonetheless Recommended for loyal, devoted fans and UHD enthusiasts.

Sale Price 13.99
List Price 24.99
Buy Now
3rd Party 25
In Stock.
See what people are saying about this story or others
See Comments in Forum
Previous Next
Pre-Orders
Tomorrow's latest releases