Earth: One Amazing Day is a sequel to BBC's 2007 nature documentary. And while not quite as impressive or impactful as the company's other productions, the doc is nonetheless awe-inspiring with extraordinary visuals of our planet's diverse creatures. The Ultra HD sucks viewers into this day in the life journey with a stunning 4K Dolby Vision presentation and a demo-worthy Dolby Atmos soundtrack, making it a recommended disc for those hungering for more 4K HDR goodness.

BBC's Earth: One Amazing Day is a sequel to their 2007 nature documentary Earth, which was released in theaters under the Disney Nature banner and is itself a companion piece to the now-classic Planet Earth television series. And like its predecessor, this 95-minute movie borrows a few sequences from other BBC-produced documentaries, such as 2001's Blue Planet and 2016's Planet Earth II, but it largely features footage that was unused or deleted for some reason or another. Initially, this could have been to the production's detriment, but it surprisingly works to its benefit instead. With excellent editing by Andi Campbell-Waite, the sequences are pieced together seamlessly to construct a fresh and still very much relevant story about the beautiful planet we share with other animals. It's a stunning, awe-inspiring collection of natural wonders serving as a reminder of Earth's fragile ecosystem without also laying some heavy-handed message of responsibility.

Legendary actor Robert Redford provides the narration, and his tranquil, soothing voice is perfect for establishing a sense of peace and calmness to the extraordinary visuals and photography of our fellow cohabiters living another day. It's an effortless invitation for this one-day-in-the-life journey of the animal kingdom, from sunrise to the middle of the night, exploring the planet's vast and astonishingly diverse selection of living creatures. The morning greets a serval cat of the African grasslands as it hunts for breakfast and elegantly leaps through the air to catch its prey. At midday, a brown-throated sloth awakes from its slumber to a female's mating call, swimming as quickly as a sloth can across the crystal-blue waters of Central America's tropical islands. And as the day comes to a close, a swarm of burrowing mayflies basks in the warmth of the afternoon sun while also providing food for the local wildlife. You know, that pesky circle of life thing. 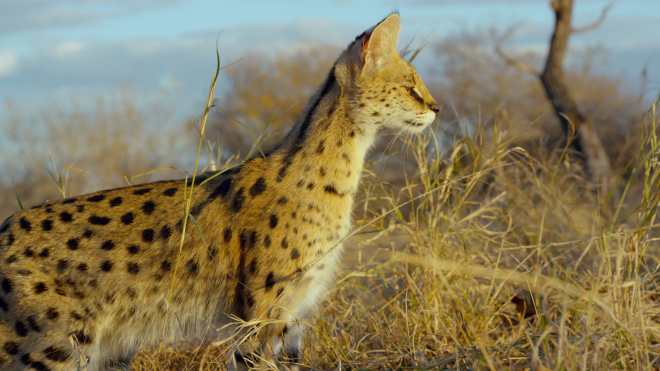 But with Redford's voice at the center, there is a sense of reverence seeing this continuous balancing act within nature, this constant back and forth between life and death, a persistent fight for survival. The cruel indifference of Mother Nature is counterbalanced with examples of sheer beauty and the environment's majesty. The swarm of mayflies is part of their mating ritual, a one-day opportunity to sprout wings is a possibility for more life and the death of a few like an offering for nourishing the continued existence of others. Of course, we also witness moments of near-misses and harrowing escapes, such as the tiny field mouse dodging the claws of an owl or a baby zebra desperately swimming against the current of a river back to its mother. There is also something incredibly moving of seeing the smallest and seemingly most vulnerable fight against the odds and live to see another day, which will undoubtedly introduce a new host of challenges. Naturally.

Compared to other BBC documentaries, Earth: One Amazing Day may not be on par with the best the British broadcasting company has produced, but it's nonetheless entertaining and as equally spectacular to watch. Hummingbirds compete for flower nectar with bees, and a sudden downpour shifts the battle in favor of the tiny-winged beauties while on the other side of the world, a curious baby panda explores its surroundings. Even though I've seen it before, watching sperm whales take a midday nap while floating vertically in the water still astonishes me, and seeing the treacherous swim penguins take in order to feed their young brings a new level of appreciation for the flightless birds. In fact, taking part in witnessing the daily struggles of our fellow animal friends provides a fresh outlook on humanity's role and how we share this beautiful planet. We greatly take for granted the privilege of our position on Earth, and the documentary serves as a reminder.

BBC Video brings the nature documentary Earth: One Amazing Day to 4K Ultra HD as a two-disc combo pack. Inside a black, eco-cutout keepcase with a glossy slipcover, one dual-layered UHD66 disc sits comfortably opposite a second dual-layered BD50 copy. At startup, owners are taken straight to a menu screen with full-motion clips, options along the bottom and music.

The nature doc explores the planet of Ultra HD with a lovely and often stunning HEVC H.265 encode. The BBC-produced sequel was shot on four separate high-end digital cameras, two of which are capable of 4K while the other two are Red Epics maxing at 6K resolution. Arguably, of more interest is that those 4K cameras shoot in the Rec.709 color space, and the Reds are capable of the full DCI-P3 gamut. This is according to the manufacturers of each camera. All the elements were later mastered to a 4K digital intermediate and graded for a Dolby Vision HDR exhibition.

On UHD, the results are fantastic overall, but there are several instances of mild digital noise, which can be quite distracting on a large screen. A few softer scenes also stand out compared to the movie's best and splendid moments. Overlooking these minor drawbacks, however, definition is razor-sharp and extraordinary. Every individual hair in an animal's coat is striking, particularly in close-up, showing the sometimes rough texture of certain creatures. Every leaf and blade of grass is detailed, and each rugged, jagged bump in the iguana's scaly body are incredibly distinct. Of course, it doesn't hurt that contrast is spot-on with pitch-perfect, radiant whites giving the picture a marvelous pop. Exceptional specular highlights provide a lovely sparkling edge to scenes with water and a tight, luminous glow in the many nocturnal creepy crawlies.

Presented in its original 1.85:1 aspect ratio, the 4K presentation also comes with inky-rich, full-bodied blacks, providing the image with a continuously awesome three-dimensional quality. The gradational differences between the various shades are spotless, allowing for clear visibility of the shadows details within even the darkest portions of the frame. From the start, the video dazzles with a sumptuous array of vibrant colors, such as the lush, opulent greens of the forest and the intensely dramatic reds of several exotic animals while the sky is glowing in a beautiful, lush soft blue. Softer secondary hues lavish the screen with hypnotizing brilliance, such as the spectacular scenes of insects swarming a river while basking in the warm orange glow of a tropical sunset. The best, demo-worthy moment of the entire movie is the remarkable shots of the polar lights animating the night sky with phenomenally rich reds and greens while also showing hints of deep magentas, sparkling pinks and zestful oranges. Then, transitioning to jaw-dropping aerial shots of city skylines at night is the absolute perfect touch.

Nature infests home theaters with an absolutely splendid and continuously impressive Dolby Atmos soundtrack, placing the audience right in the middle of the jungle and surrounding them with a plethora of animal sounds. Insects flawlessly buzz across the screen, to the sides and to the back of the room as though literally circling the listener. The wind blows through the grass and rustles the leaves on trees in the distance, and the grunts, howls, wails and chirps of various animals will suddenly break the few moments of silence. Many of those same atmospherics discretely travel into the ceiling channels with impeccable accuracy and are effectively convincing. Occasionally, some random bird or bug will suddenly fly overhead from one side of the room to the other with spotless panning. The best moments, however, are when traveling through a watery cave or scenes with heavy rainfall where individual droplets are distinctly heard from above and come down from every direction.

Meanwhile, the three front channels come littered with a tremendous variety of noises, endlessly filling the off-screen space with random activity and creating a broad, highly-engaging soundstage. The mid-range exhibits terrific detailing and separation in the highest frequencies with room-penetrating clarity, and the soothing, harmonious voice of Robert Redford is crystal-clear and precise from start to finish. Most surprising for a nature documentary is the enormously powerful, couch-shaking low-end, reserved mostly for a couple moments of suspense, but it's effective, adding an authoritative presence and depth to the gorgeous visuals.

Behind the Scenes (HD, 15 min): A series of interviews with various crew members.

Clash of the Titans (HD, 2 min): More footage of the giraffe battle.

Raising a Family at the End of the World (HD, 2 min): Additional footage of penguin parenting.

Pieced together from unused and recycled footage of other BBC documentaries, Earth: One Amazing Day is a day in the life of the various creatures inhabiting our planet. With stunning, extraordinary photography capturing the daily struggle for survival, the nature doc doesn't really feature the sort of heavy-handed messaging usually expected, but it nonetheless carries a reminder we share this planet with a diverse and fragile ecosystem. The Ultra HD comes with a gorgeous 4K presentation in Dolby Vision HDR and a reference-quality Dolby Atmos track that'll leave the listener feeling as though walking through the middle of the jungle. Despite a weak, disappointing selection of supplements, the overall package is worth picking up for some memorable A/V goodness.