Celebrating its 40th Anniversary, Steven Spielberg’s 1982 smash hit family classic E.T. The Extra-Terrestrial celebrates its milestone with a new 4K Ultra HD Blu-ray from Universal. Not content to simply repackage the same excellent HDR10 transfer and DTS:X audio mix, Universal has added a pair of new bonus features to sweeten the deal. If you already have the 35th Anniversary set, you’re good to go, but if you’ve yet to add this now timeless classic to your collection, this is a great disc for the shelf. Highly Recommended

As we’ve covered E.T. The Extra-Terrestrial a couple of times over the years, I’ll let those reviews stand for those who want a more thoughtful and thorough look at Steven Spielberg’s little opus. For myself, I was essentially born into loving this film. I was all of three weeks old when my parents took my older sister to see it and the theater made them buy a ticket for me too (the stub is in my baby book!). It’s a film that still holds a soft spot all these years later. E.T. isn't one I pull off the shelf all that often but when I do I’m still swept up in the magic and wonder of it. I’ve seen people dismiss this as too “family-friendly” or just a “kids' movie,” but I simply don’t share that cynicism. Sure, it’s not the greatest film ever made and it gives me a horrible craving for Reese’s Pieces, but it’s a delightful heartfelt film with great performances, special effects, and complete with a childlike sense of wonder and amazement that only the best movies can provide.

Vital Disc Stats: The 4K Ultra HD Blu-ray
To celebrate the 40th Anniversary of E.T. The Extra-Terrestrial, Universal went all out offering a new two-disc 4K Ultra HD Blu-ray release. This time around instead of using a BD-66 disc, they ponied up for a BD-100 with a BD-50 for the 1080p version along with a digital copy slip. The two discs are housed in a sturdy two-disc case with an identical slipcover with raised features. The disc loads to a static image main menu with the bonus features panel along the right side of the screen.

If you’re not interested in the basic 2-Disc release, Universal dropped a few different options you can check out below: 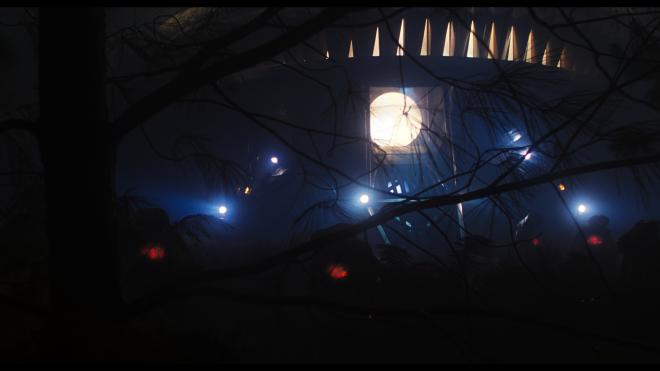 Essentially the A/V presentation is identical to the one Universal issued for their 35th Anniversary 4K release, sadly no Dolby Vision upgrade here. But that’s okay, this is still a lovely transfer so I’ll let E.’s findings stand here. I flipped between discs to see if the newly authored disc offered up any bitrate advantage, but there wasn't a substantial difference. Here are Mr. Duarte's thoughts on the HDR10 transfer:

Celebrating its 35th anniversary, the classic Spielberg film lands on Ultra HD with a surprisingly beautiful HEVC H.265 encode, which more than likely was struck from the recent restoration and remaster from a few years ago. And like in that previous release, the transfer is awash in an ultra-fine layer of natural grain that's consistent, providing it with a lovely film-like quality. Understandably, there are a couple moments of poor resolution and where the grain suddenly looks thicker than normal, but thankfully, they're not so terrible as to distract from enjoying the movie. Overall, the picture is incredibly detailed and well-defined, especially the daylight exteriors, showing sharp definition in the surrounding foliage and the architecture of the suburban neighborhood. Inside the shadow-drenched house, details come through without issue, revealing many of the small trinkets and pieces of furniture scattered throughout the family house. Fine lines are distinct with excellent lifelike textures on the faces of the cast and on a variety of clothing. 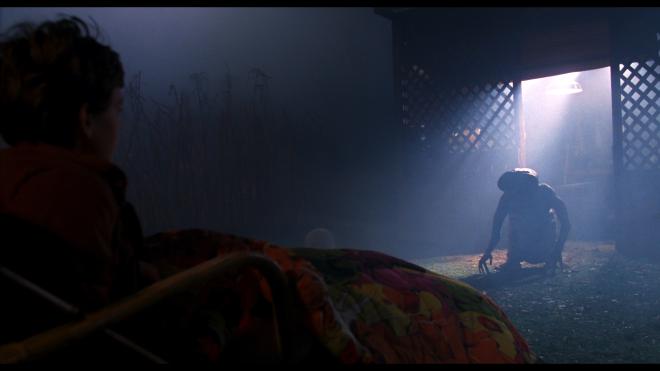 Of course, the real benefit in seeing the beloved film on UHD is the higher dynamic range, displaying better contrast and brightness than its HD counterpart. Immediately apparent in the opening moments, blacks are luxurious and practically oozing off the screen with lots of velvety, inky shadows everywhere and appreciable gradational differences between the various shades. Staying true to Allen Daviau's cinematography, most interior shots of the house are the deliberate result of limited and poor lighting conditions, but background information remains distinct and visible. The 1.85:1 image is also significantly brighter with crisp, true-to-life whites, making the sterilized hazmat suits pop more while also looking dramatically different from other parts of the room. Outstanding specular highlights revealing far more detailing in the brightest spots, such as in the headlights and flashlights that move across the screen or how the light glistens off E.T.'s slimy body while still exposing every wrinkle and pore. The film has never been particularly colorful, but the palette is nonetheless greatly improved with more animated primaries and better warmth in the secondary hues, giving flesh tones a healthier, more realistic complexion.

In the end, the sci-fi drama has never looked better than it does on 4K HDR, almost as if watching it again for the first time in theaters. 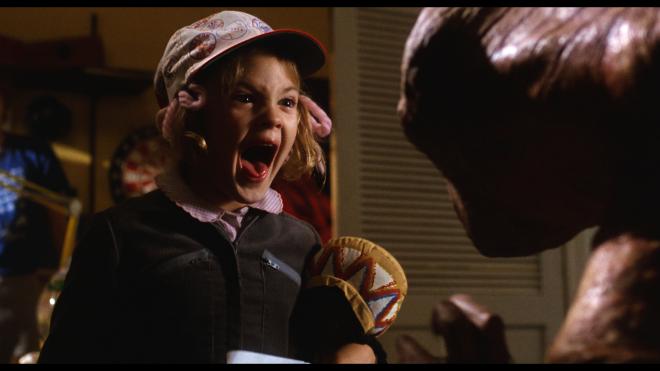 Same goes for the audio - we’re getting the same solid DTS:X audio mix to liven up the adventure and excitement!

For this latest home video release, Universal Studios has also decided to upgrade the audio to a DTS:X soundtrack that doesn't sound that much different than its DTS-HD counterpart, so I'll repeat most of what I wrote in my previous review. Nevertheless, this new track remains just as satisfying and immersive as before with a few welcomed improvements.

Without a doubt, the track's greatest and most thrilling aspect is the memorable score of John Williams, and with the added breathing room, the music energizing the entire room with richer detail and clarity while lightly bleeding into the front heights. Every time the haunting, fairytale-like motif comes on, the front soundstage fills with warmth and fidelity, generating a wonderfully engaging image. Dynamics and acoustics are crisp with sharp, almost lifelike precision in the instrumentation. Vocals are clean and well-prioritized in the center with remarkable intonation, allowing for viewers to hear every tearful piece of dialogue. Low bass is appropriate for a movie of this vintage, mostly reserved for providing depth to the music. 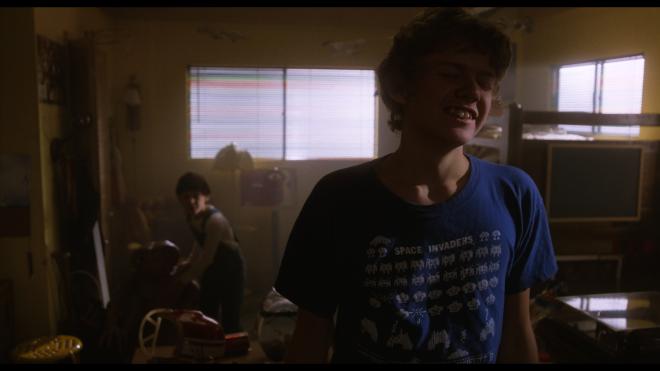 Equally impressive are the surrounds, utilized on numerous occasions to enhance the action with a few choice moments extending into the ceiling channels. Surprisingly, discrete effects never sound artificial or forced. Instead, they create a satisfyingly immersive soundfield with excellent directionality. Subtle atmospherics in outdoors sequences broaden the listening area, which sometimes travel into the space above, while the sounds of cars, helicopters or space ships fly overhead and amazingly move with fluid, flawless panning. The more intense sequences of Williams' score have also been slightly tweaked for greater envelopment, pulling viewers into the middle of the excitement and drama when a few key notes resonating above. It's a fantastic mix that fans will love and arguably even prefer over its predecessor. 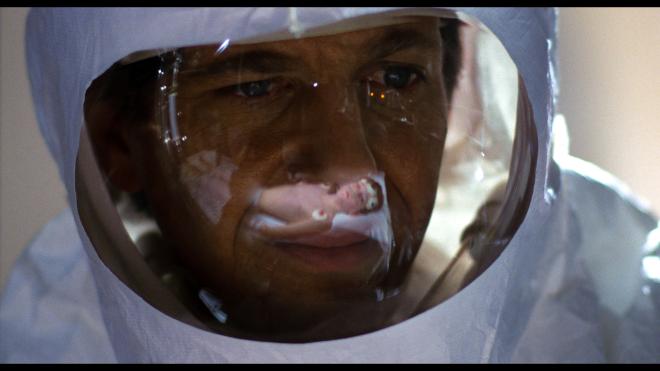 This is where this 40th Anniversary set gets a little more interesting than simply being a routine repackage. Not only did Universal drop the bonus features on the actual 4K Ultra HD Blu-ray, but there are some welcome new extra features that are worth taking a gander at. As a whole, it’s nice to see that they’ve brought together a pretty complete package in that regard - and no, the longer “Director’s Cut” with the daffy walkie-talkies instead of shotguns is not included. Spielberg has been pretty firm in his feelings that was a mistake and it won’t be coming back. 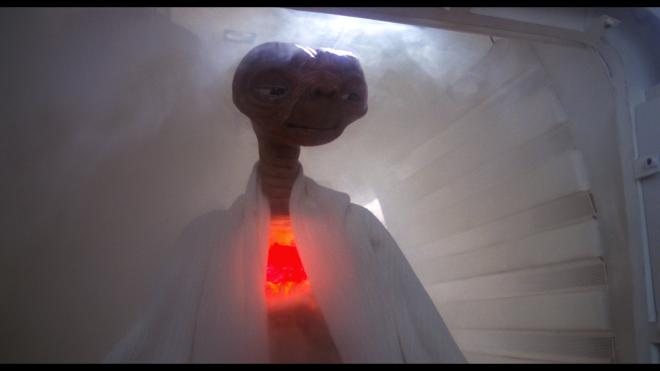 E.T. The Extra-Terrestrial is just a great movie, plain and simple. It’s honest and heartfelt and just a great film. Sure, yeah, historically speaking it dwarfed-out Blade Runner and John Carpenter’s The Thing from succeeding at the box office, but that’s all bicycles over the moon at this point. 40 years on, this film is still delighting families and it will continue to do so for generations to come. After an already great 35th Anniversary 4K Ultra HD Blu-ray, Universal bows another two-disc 4K set for fans. The good news is they offer the same excellent A/V presentation so no pressure to upgrade there. The biggest get for this release (outside of the retailer-exclusive gift sets) is two new featurettes. But those aren’t reasons enough to trade up. If you’ve yet to add this film to the collection, now’s a great time to grab this disc and some Reese’s Pieces. Highly Recommended.