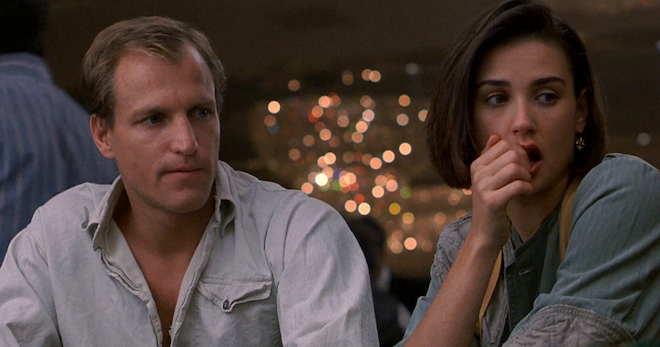 Indecent Proposal asks that age-old question, Would you sell your spouse for million dollars to someone for a night of romance? Well, Robert Redford, Demi Moore, and Woody Harrelson try to answer that question in the 1993 film that still holds up to this day. The new 4K image with Dolby Vision and the DTS-HD 5.1 audio mix are both very good via Kino Lorber, making this the best the film has ever looked. Unfortunately, the twenty-year-old commentary track from the director is the only extra. Recommended!

Thirty years have passed since the film Indecent Proposal hit the big screen. There have been many similar movies and stories where money and a forbidden romance cross paths, but none quite as successful as Indecent Proposal claimed back in 1993. With an all-star cast and a fantastic director and writer, it's easy to see why the small-budget romantic drama grossed more than $230 million at the box office. Whether it is the fantasy taboo subject that might be on everyone's mind at some point in life or the excellent performances, one thing is for sure, Indecent Proposal captures those late '80s and early '90s vibes perfectly - for better or worse.

Indecent Proposal is based on the book from 1988 by author Jack Engelhard and starred Robert Redford, Woody Harrelson, and Demi Moore. Most couples of single bachelors have probably at least thought about this particular scenario at one point in life where someone offers a married couple a large sum of money to spend a romantic night with their spouse. What could go wrong? As director Adrian Lyne (Flashdance, 9½ Weeks, Fatal Attraction, Jacob's Ladder) unravels this seemingly lovely relationship where risks are taken, one big financial offer could change the course of two people's lives forever. With the film's peccadillos in place and given the time period this film was released, the ending is sweeter than it should be, but then again, everyone loves a happy ending.

David and Diana Murphy (Harrelson and Moore) are a great couple who are trying to jump-start their big careers in real estate but are having some issues due to a recession. They need some money in order to succeed, and instead of working something out, they head to Las Vegas to gamble in hopes of turning out something big. That's where they bump into John Gage (Robert Redford), a wealthy man who offers the couple one million dollars for one night of romance with Diana. The couple agrees and things spiral out of control from there. But just like everybody says in Vegas, "The house always wins", which is where Cage is ahead of the curve at every moment as David and Diana's relationship sours to the lowest form.

Indecent Proposal would have been easier to believe if Gage wasn't played by the handsome and amazing Redford. If it was someone else without those great looks and charm, the story would be a bit better, because again, who wouldn't jump at the chance to date Robert Redford for a night? That's where the disconnect lies. Well that and how everything can turn out as precious as it does over the course of a long time in its narrative that feels rushed here and there. But at the end of the day, Indecent Proposal marks a time in cinema where everyone was performing at their best in a taboo subject story by some great filmmakers. The movie still holds up with its perfectly cheesy soundtrack as well.

Vital Disc Stats: The 4k Ultra HD Blu-ray
Indecent Proposal makes the deal to 4K + Blu-ray via Kino Lorber. The two discs are housed inside a hard, black plastic case with a cardboard sleeve. The artwork is the same as the original movie poster with the three main characters caught in that love triangle. There is no insert for promos or digital codes.

Kino Lorber Studio Classics' release of Indecent Proposal comes with a new 2160p UHD 4K transfer with Dolby Vision supplied by Paramount. The original film was shot on 35mm and it looks like this new 4K image was taken from that original camera negative and was ultimately supervised by director Adrian Lyne.

All in here, this is a giant upgrade from that previous Blu-ray release that had an old transfer and now everything is more vivid, and detailed, and has a greater color palette that matches the intentions and tones from Lyne's vision. The film still has a warmer image with those hazy like glows to keep in check the fantasy style of the story. The film gran is still intact and keeps the picture filmic and not looking like it went through a digital carwash. Amber and yellow tinted lighting make for the most of this warm picture in interior shots.

Other sequences showcase the bright lights of Las Vegas with tons of neon reds, purples, greens, blues, and gold. Green felt on the gambling tables look bolder and the roulette reds and blacks are deeper. Exteriors are a bit cooler now with some steely blues and greys that contrast nicely with the fantasy-like scenario. Black levels are now inky without the murky shadows. And the Dolby Vision allows for those darkened rooms to breathe more with other shades of light coming through, along with each of those Vegas lights burning brighter.

The detail is sharp but has a softer quality to it. Nothing is too harsh this time around, which is nice. Closeups reveal facial pores, individual hairs, and. makeup applications nicely. Textures in the felt tables and clothing look amazing as well. There were no big issues with aliasing, banding, or major noise this time around either. This is a major upgrade from the previous release.

This release comes with a DTS-HD MA 5.1 audio mix and sounds great given the nature of the film. This is a dialogue-heavy movie and most of the sounds are focused on the front speakers. Other sound effects of the elements of a las Vegas strip and casino can be heard nicely through the surrounding speakers. People chattering, yelling, casino games being played, slot machines chiming, and glasses clinking all sound wonderful here with some well-balanced dynamics.

There are some decent sporadic low-end bass moments when in Las Vegas or when vehicles are driving. This element also picks up when the song cues and score kick in throughout, which always adds that necessary dramatic and romantic tone. The dialogue is clean, clear, and easy to follow. This is not a particularly loud soundtrack, but it gets the job done.

Indecent Proposal still stands the test of time as that ultimate taboo question most people have fantasized about in their heads. With an exquisite cast of big names, some great performances, and a ton of excellent camerawork, Indecent Proposal is still a lot of fun to watch, even if it feels cheesy at times, especially the ending. But hey, it was the early 90s! The new 4K with Dolby Vision transfer has this film looking the best it ever has and the DTS-HD 5.1 audio mix sounds great. Only a vintage commentary track from the director is included though. Recommended!