Over thirty years later, Adrian Lyne's tight and tense sexual thriller Fatal Attraction still manages to terrify. Glenn Close delivers a phenomenal performance that keeps Michael Douglas on his toes as the terror builds from one scene to the next. The ultimate stalker film of its generation, Fatal Attraction comes to 4K Ultra HD Blu-ray a scant two years after a solid remastered Blu-ray reissue on the famed Paramount Presents label. This 4K release uses the same Dolby Vision transfer found on streaming services offering some modest improvements here and there, but some questionable grain management and reusing the same serviceable audio mix keeps this disc from being a truly worthwhile upgrade. Worth A Look

Fatal Attraction still packs a wallop 33 years later. Watching it again for the first time in probably a decade, it's still a chilling film with a pitch-perfect performance from Glenn Close. The film itself may not do much for the stigmatization of mental illness, it's a little thick in that regard, but it's a hell of a sexual thriller. While Glenn Close continues to receive the lion's share of the acting accolades, I do have to tip my hat to Douglas here. His later filmography may become a bit silly by recycling the theme of how sexual dalliances gets him in trouble - but he's in perfect form here. You never really get to know if his Dan Gallagher habitually cheats on his wife or if this was a first-time offense, but you can see pretty quickly he regrets his choice. While I wish the original darker alternate ending could be worked back into the main feature through seamless branching, Fatal Attraction remains a highly entertaining flick.

Vital Disc Stats: The 4K Ultra HD Blu-ray
Fatal Attraction invades your 4K Ultra HD Blu-ray collection in a new two-disc set from Paramount. The case artwork nor the identical slipcover indicated the same Blu-ray disc from the Paramount Presents release was included - but it's there. The 4K version is pressed on a BD-66 disc. Both discs are housed in a standard two-disc black case and load to static-image main menus. None of the bonus features are included on the 4K disc. 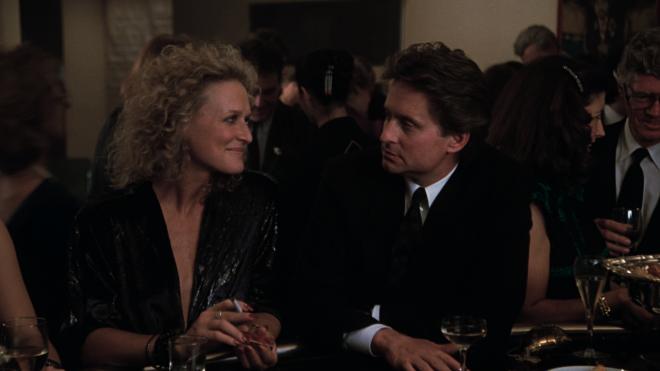 Back in 2020, Paramount gave fans of this chilling thriller a solid reason to upgrade with the Paramount Presents reissue. While not perfect, it was still pretty good in spite of some slight brief black level issues for the initial party sequence. But all in all, it was a great-looking disc for a back catalog film that had a unique style and appearance favoring several smoky, hazy scenes. With that in mind, this Dolby Vision transfer sourced from the same restoration and has been running around on streaming services ever since that Paramount Presents release hit shelves and it offers only modest improvements. I don't fully understand the wherewithal of not including this film on a 4K disc back in 2020, but here we are. 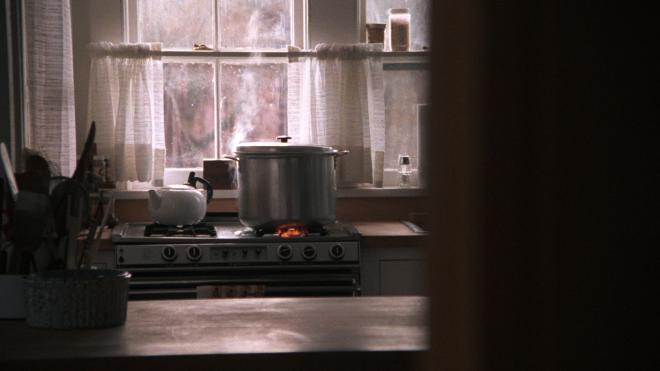 Details pick up some nice improvements here and there letting facial features, clothing textures, and fine details of Alex's stark white apartment to come to life. The Dolby Vision pass is decent enough giving black levels a little more breathing room to avoid serious crush, but that opening party at the Japanese Restaurant and later when Dan is confessing his sins - it's still easy to lose anyone wearing all black into the background creating some flat floating heads. Primaries get few moments to come to life, the greenhouse or when Alex and Dan are running through the park are fine moments - but since this is a fall-themed film it's also pretty drab with heavy browns and gray tones. So not exactly a looker, to begin with. Red on white is a frequent motif throughout and those moments look great. 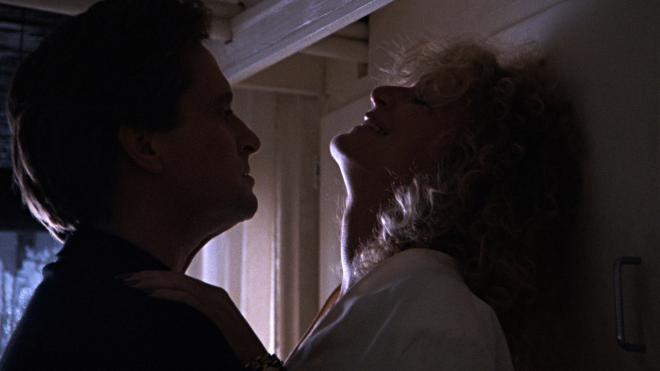 The biggest "however" point for this release is some inexplicable grain management. It hasn't been completely scrubbed clean, it's not a complete waxy monster, but it's noticeable and weirdly applied for random scenes. When it crops up, bit rates slide into the low twenties whereas its SDR Blu-ray counterpart will keep up into the 30s and 40s without issue. It happens throughout the film, but the most noticeable instance to my eyes was when Alex calls Dan in the middle of the night before telling him she's pregnant. The dark footage of Michael Douglas in bed looks terrific with clean grain structure and a healthy bitrate but when it cuts to Glenn Close pacing her apartment with the lights on, fine details slip away and that bitrate can nosedive. This also happens for exteriors of Alex's apartment, a few scenes in Dan's home, and other odd areas where it just doesn't seem necessary to be throttling the film grain in such a way. Most of the time it's not always noticeable unless you're really looking for it, but there are some patches that make you wonder what the heck just happened. I don't know the reasoning for Paramount doing this with some of their catalog titles but it's a thing that comes up from time to time. This isn't as bad or noticeable as something like The Man Who Shot Liberty Valance - but it's another odd case of this weird practice for their back catalog. 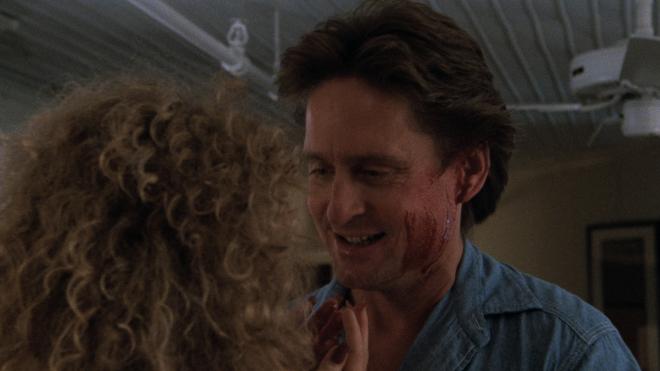 And once again the same middling Dolby TrueHD 5.1 track has been recycled from past releases. It's not horrible but it isn't anything special either. Dialog is clean and the Jarre music cues and basic sound effects are lively enough but it's just not a very active surround mix. It gets the job done. 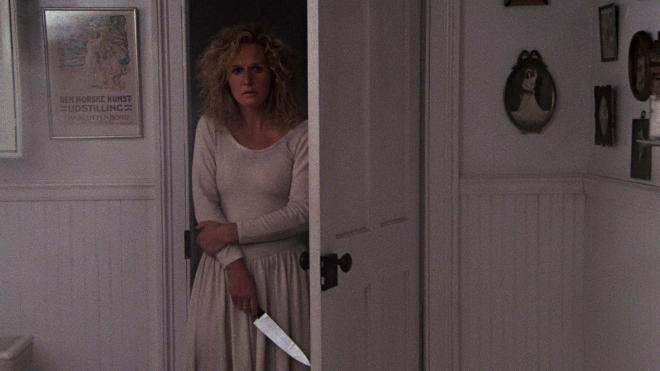 Frustratingly all of the bonus features are found on the included Blu-ray disc only. So no audio commentary on the main 4K disc. This is the same as the Paramount Presents disc so there's nothing new in the rabbit stew. 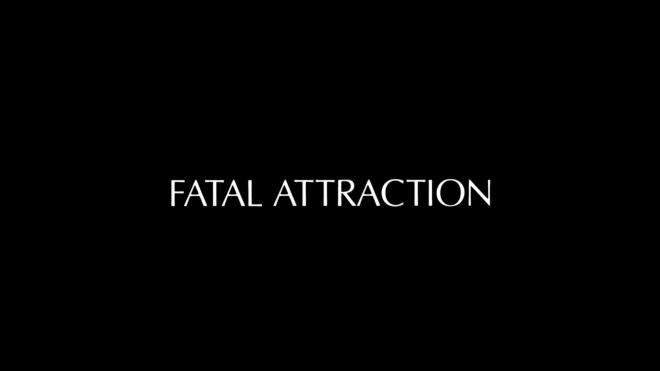 It doesn't matter what format you're watching on, Fatal Attraction remains a terrifying tale about the perils of an extramarital affair gone wrong. Glenn Close owns this film. Michael Douglas is fine, he delivers as he does in every movie but this is Close's film from the first time she appears at the party. The only thing more insane than her character Alex is that she didn't win the Oscar for this incredible performance. Over thirty years later this movie is still one of the most arresting and terrifying experiences you can have at home or in the theater. Now after a respectable turn with a remastered Blu-ray on the Paramount Presents label and streaming in 4K, this film finally gets a 4K Ultra HD Blu-ray release and the results are just okay. It is by no means the worst 4K release ever, it's just not that impressive either. Some bizarre and needless use of grain management for scenes that do not need it holds this otherwise fine transfer back. When it's good it's a notable improvement, but it trips over its own feet enough to make it difficult to recommend an outright upgrade. With the same middling audio and no new bonus features, it's a ho-hum release for such an exciting and thrilling film. Worth A Look