Chucky continues his unhealthy obsession with a now 16-year-old, emotionally-troubled Andy in Child's Play 3, but he now targets the younger, lonely Tyler for a darkly twisted game of "hide the soul." Although the weakest of the franchise, this mischievous follow-up is nonetheless a bearable, comical watch with an amusing haunted funhouse finale. Courtesy of Scream Factory, the third installment enlists in the 4K Ultra HD military academy with a satisfying Dolby Vision HDR video, an awesomely engaging Dolby Atmos mix and a new set of exclusive bonus features. Overall, the two-disc UHD collector's edition is a Recommended addition to the 4K horror library.

Picking up eight years later after Child's Play 2, Mancini pens a third entry to the series Child's Play 3 about Chucky's unhealthy obsession with Andy Barclay, but not without a few jabs at children's product marketing and dastardly corporate greed. Thinking it's recuperated from the publicity nightmare caused by the murders seen in the previous two movies, the Play Pals company takes a stab at re-launching their most popular toy line: the Good Guys doll. In what is arguably the best opening titles sequence of the franchise, Chucky's mangled and melted body is lifted from the assembly line floor, blood dripping everywhere, including a fresh cauldron of liquefied rubber. Trick photography shows blood coursing and mixing with flesh-colored plastic as our favorite cheeky maniac is assembled into a new doll.

One murder involving marbles, darts, and a red yo-yo later, a very frustrated Chucky (Dourif) quickly finds the whereabouts of a now 16-year-old, emotionally-troubled Andy (Justin Whalin). Turning this mischievous tale into a bizarre darkly subtle farce of Kubrick's Full Metal Jacket meets Taps, Mancini sets the plot inside a military boarding school where it's even more difficult for Andy to find anyone that will believe a doll is possessed by the soul of a serial killer. But when the younger Tyler (Jeremy Sylvers) finds the Good Guy first, this adds an interesting twist to Chucky's original plan, forcing Andy to the position of hero rather than relapse into a helpless victim. It's not enough to save the film as a whole, but it makes for a bearable story that finishes with an amusing haunted funhouse finale.

Director Jack Bender, perhaps best known for his work on the Lost TV series, also does what he can to make the movie a tolerable watch. How successful he is at achieving that, however, is up for debate. He brings a good pace to the narrative and injects it with a few decent, moody moments, though they are mostly standard genre tropes and camerawork. Unfortunately, his style must contend with flat, generic plot devices, such as the dull, humdrum Perrey Reeves providing an uninteresting love interest in the tough Kristin De Silva. Then there's the questionable Travis Fine as Lt. Col. Brett Shelton doing a horrible teen version of R. Lee Ermey. It loses steam at the halfway point, but despite recovering with a pleasing finale, part three is rightly considered the weakest of the franchise.

Vital Disc Stats: The Ultra HD Blu-ray
Scream Factory brings Child's Play 3 to 4K Ultra HD as a two-disc Collector's Edition combo pack. The Region Free, UHD66 disc sits comfortably opposite a Region A locked, BD50 disc on the opposing panel, and both discs are housed inside the standard black keepcase with a cardboard slipcover. At startup, the disc goes straight to a static screen with the usual selection along the left side of the screen and music playing in the background. 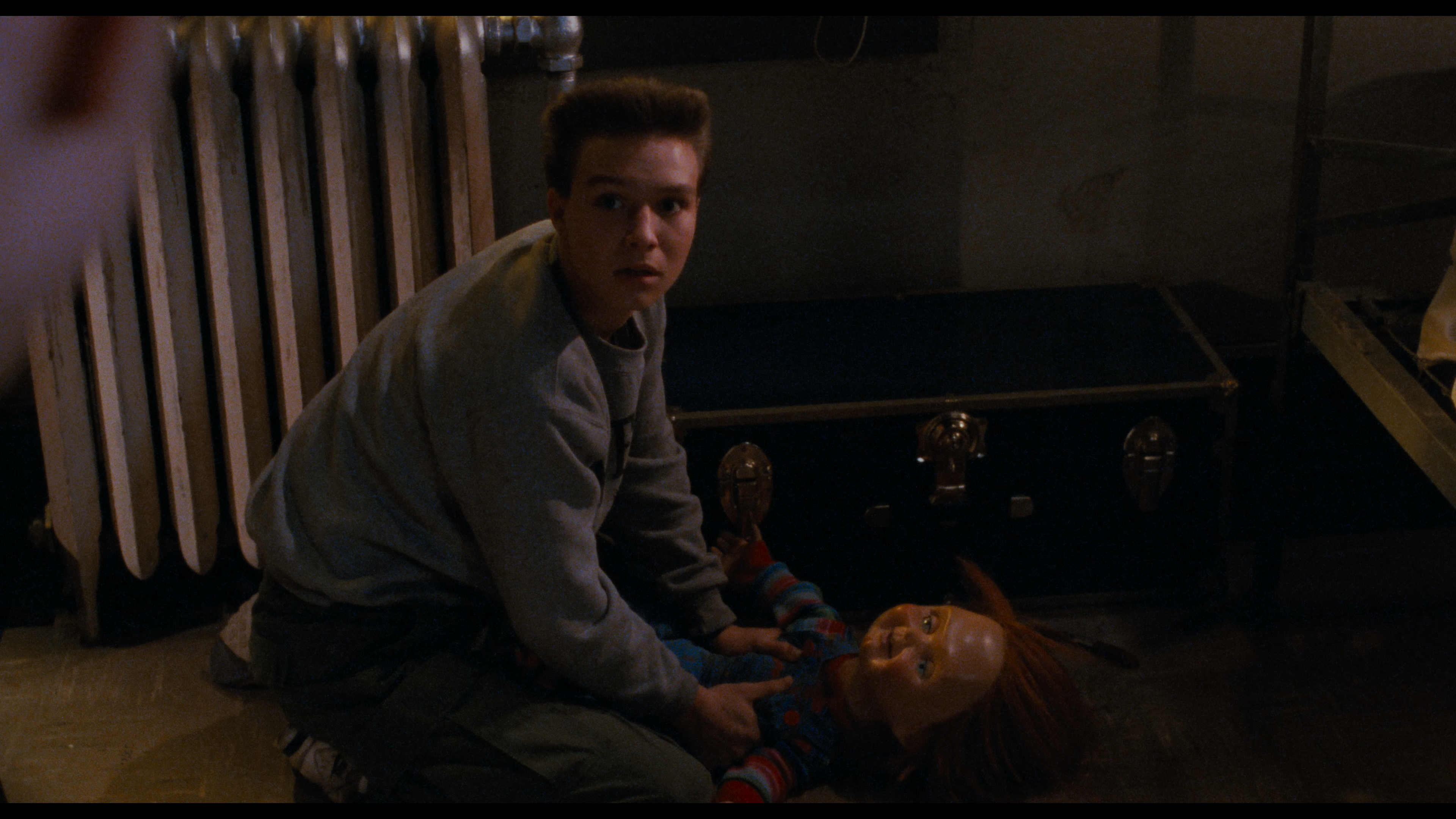 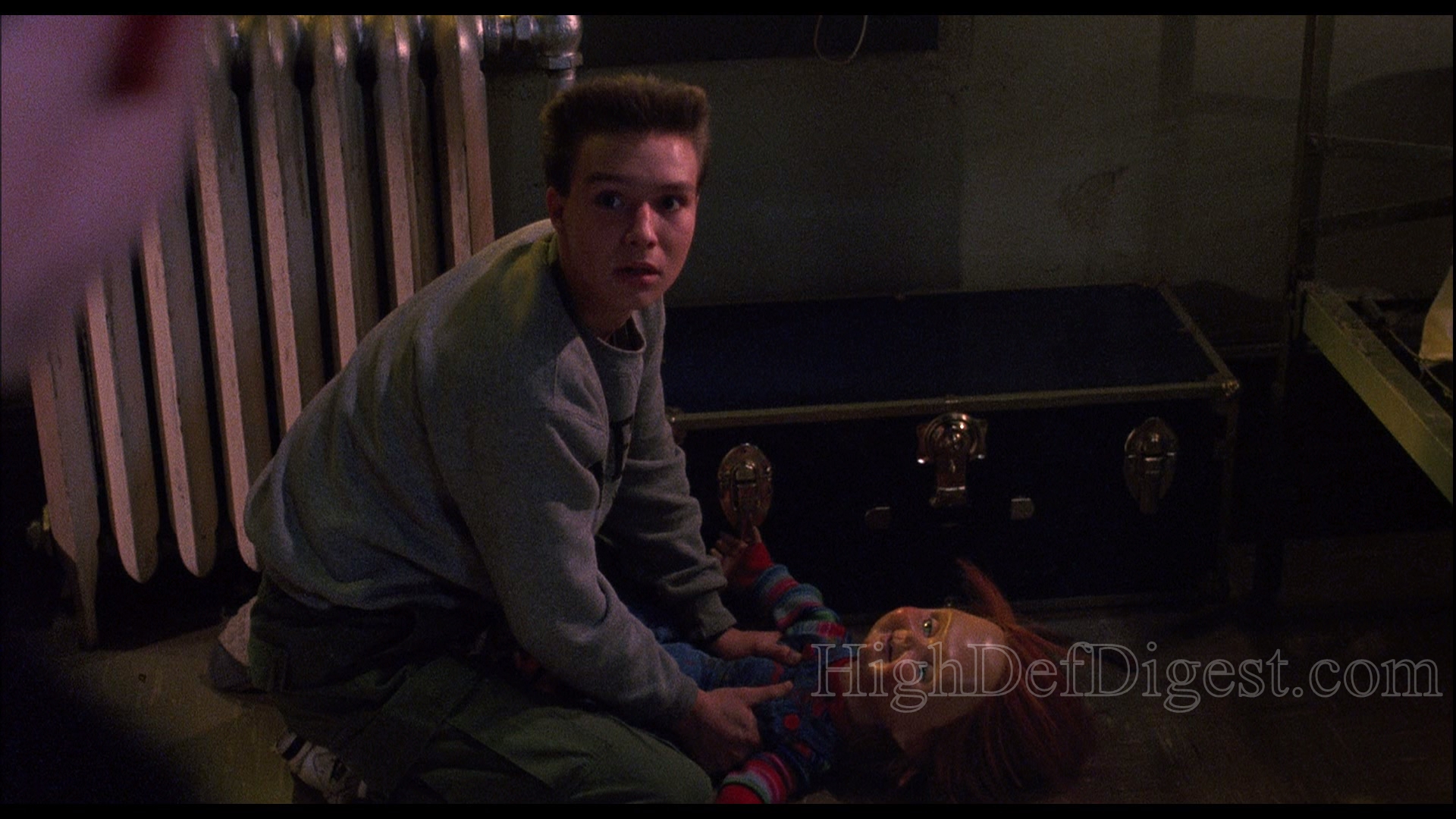 Breaking from the ranks, the third installment finds a new friend in 4K Ultra HD, sporting an attractive HEVC H.265 encode that was struck from a new remaster of the original 35mm camera negatives. Awash in a more refined, thin layer of natural film grain throughout, the native 4K transfer arrives with a welcomed uptick in overall definition and clarity. It's not quite as impressive as the first two movies and comes with its fair share of softer moments, but it's an upgrade from previous home video releases, revealing strong details in the costumes, architecture of the school and the surrounding foliage.

The more notable improvement is the boost in contrast and brightness balance, showering the action in cleaner, more brilliant whites and inkier, velvety blacks while maintaining excellent delineation in the darkest shadows. Specular highlights supply a tight, revealing glow from the lights and the sun beaming through windows while various other surfaces enjoy a realistic sparkle and sheen. The Dolby Vision HDR presentation also delivers a richer, more full-bodied selection of colors, from the animated reds, energetic blues and buttery yellows of the Good Guys outfit to the more lively and dynamic assortment of secondary hues. Skin tones appear more natural with peachy-rose complexions in the cast while exposing pores, tiny wrinkles and negligible blemishes. Overall, the 1.85:1 image has a lovely, film-like quality that will make fans quite happy. (Dolby Vision HDR Video Rating: 82/100) 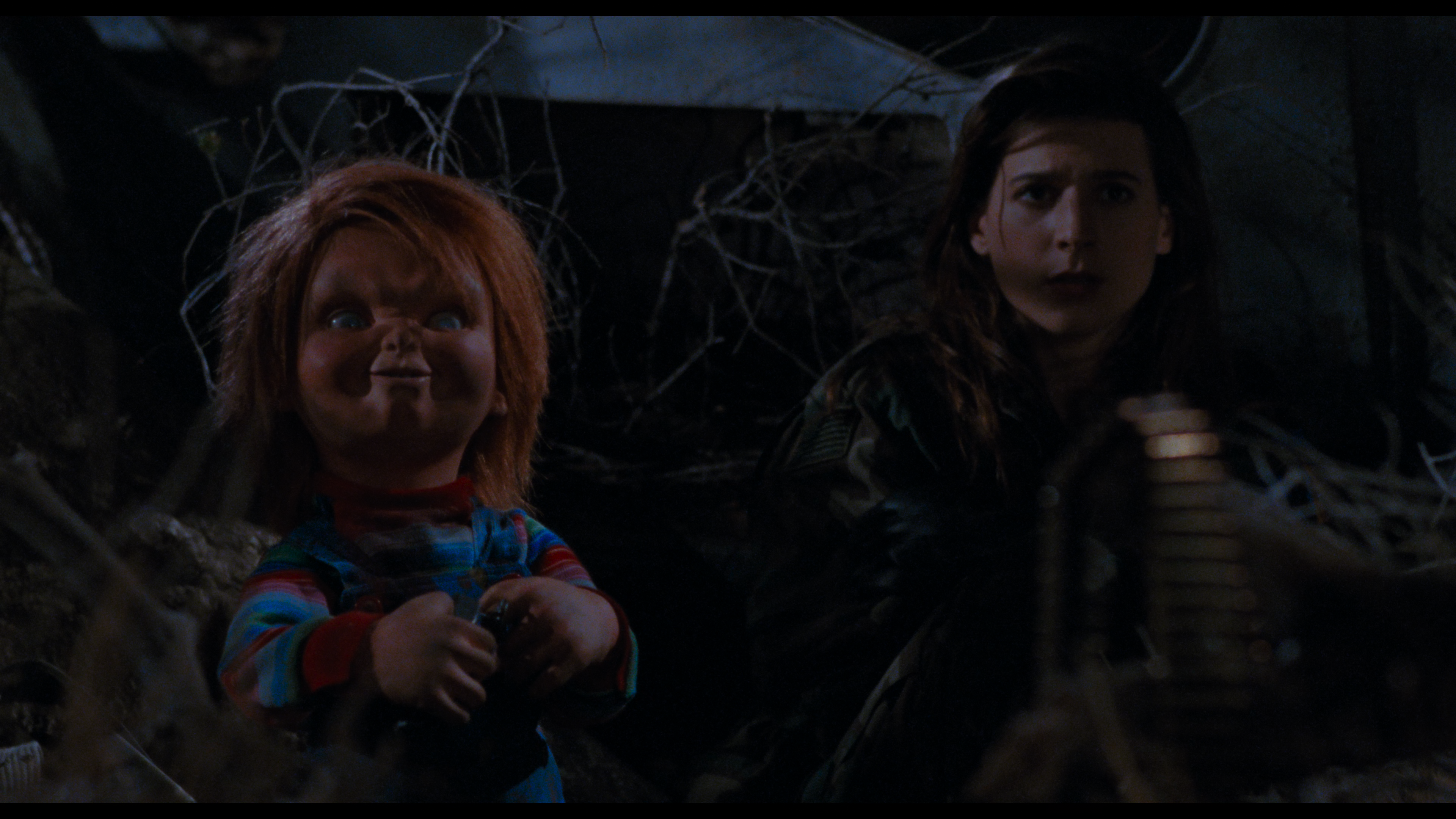 Chucky declares war on home theaters with another awesome and satisfying Dolby Atmos soundtrack, and this is arguably the stronger of the three movies invading UHD. Unlike the first two, this object-based track features a bit more activity in the heights with John D'Andrea and Cory Lerios's score doing most of the work, bleeding into the surrounds and overhead without feeling forced or artificial. The noise of thunder and the occasional ambient effect also move above the listening, generating an enjoyable and engaging hemispheric soundfield. The mostly front-heavy presentation displays excellent background activity with various other atmospherics flawlessly panning across the fronts and heights, creating a broad and spacious soundstage. While maintaining well-prioritized and intelligible vocals throughout, imaging exhibits excellent definition and separation, even during the loudest segments, and the music enjoys impressive fidelity and orchestration. The low end can feel somewhat wanting in certain scenes, but overall, it's adequate with appreciable weight and impact to provide some presence to the action. (Dolby Atmos Audio Rating: 84/100) 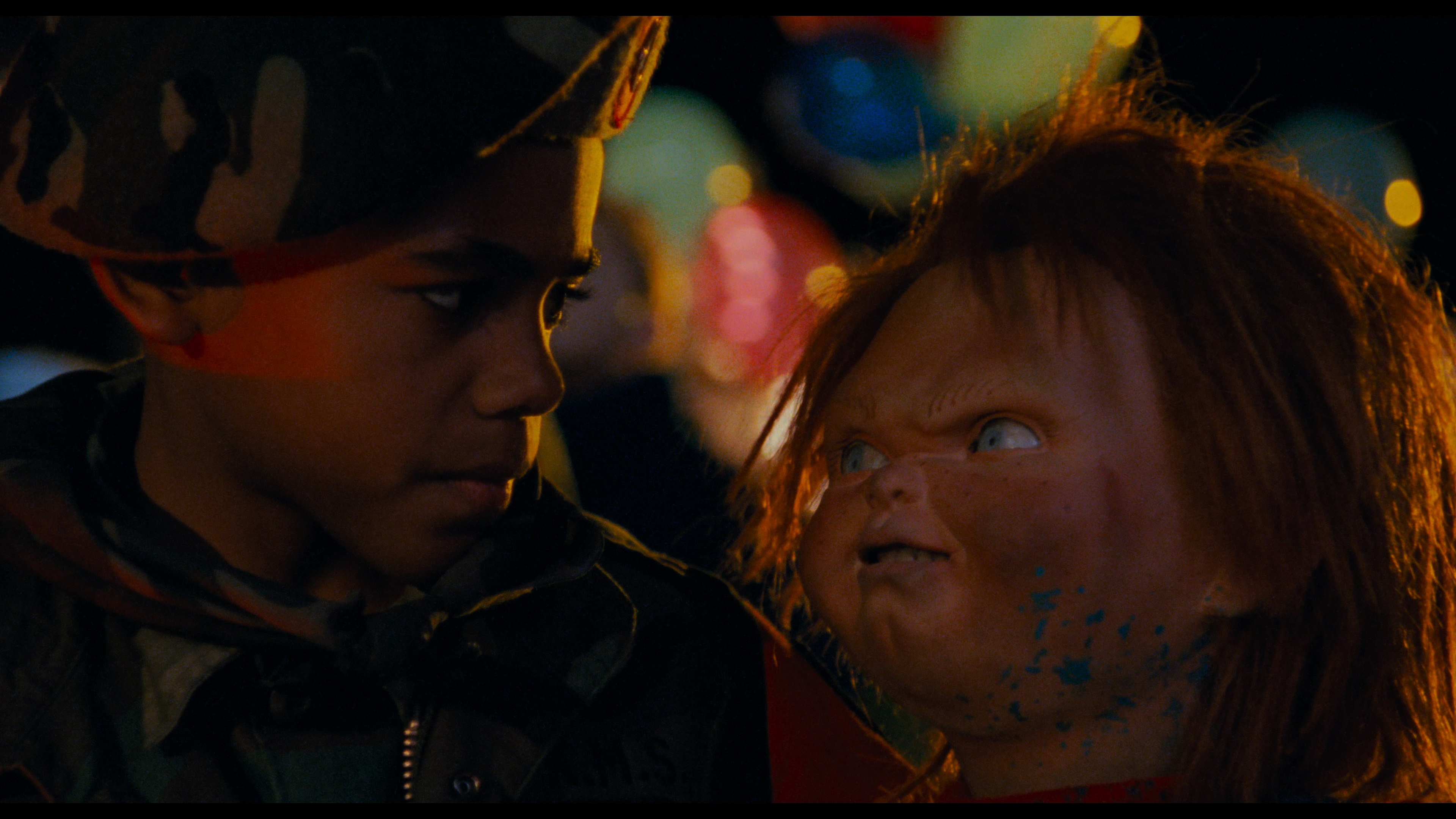 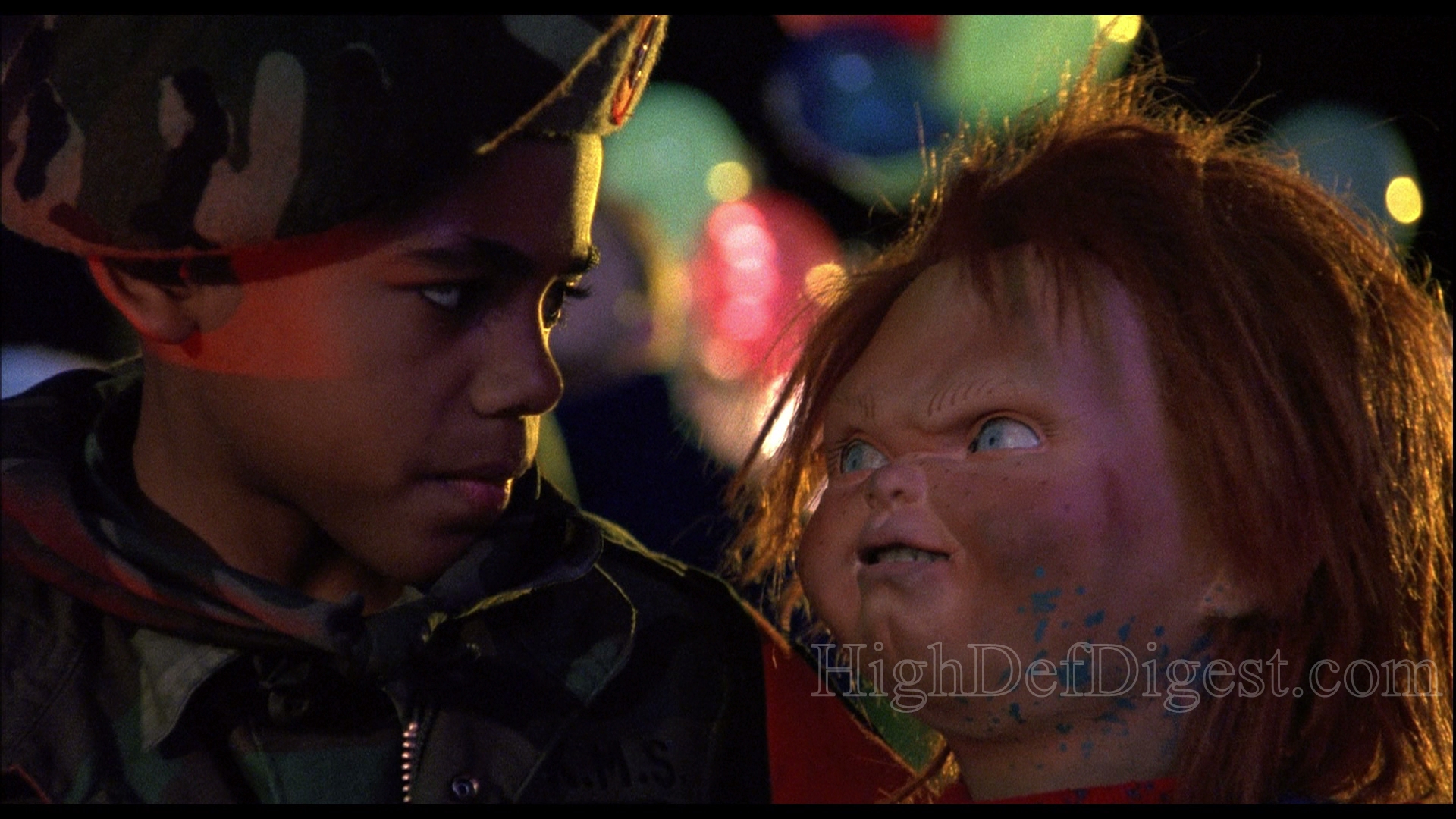 For this UHD edition, Scream Factory loads the accompanying Blu-ray disc with some familiar supplements along with seven more new exclusives. 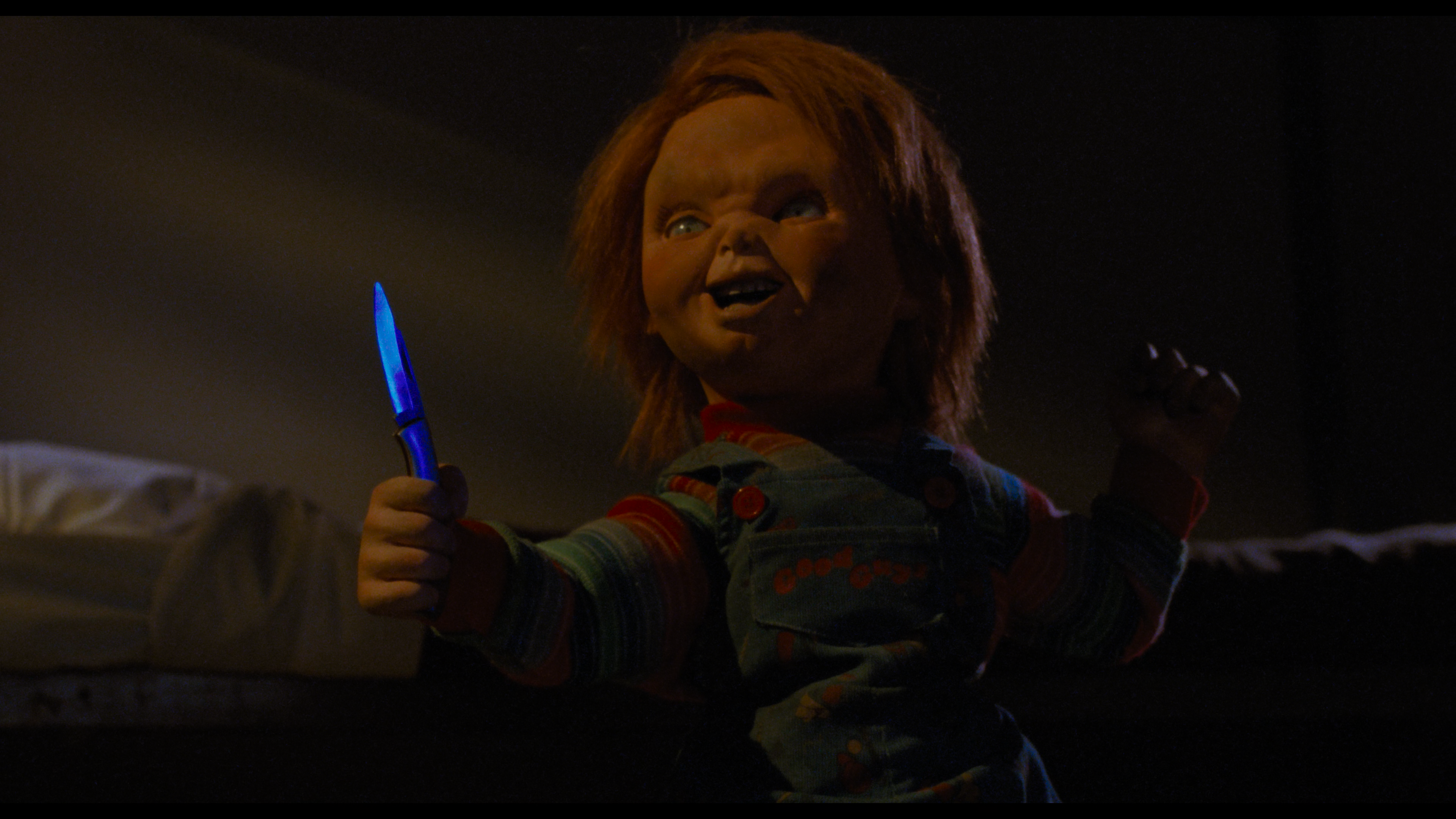 Picking up eight years after the sequel, Chucky's unhealthy obsession with a now 16-year-old, emotionally-troubled Andy continues in Child's Play 3, but his target for body-swapping shifts to the younger, lonely Tyler. A bizarre darkly subtle farce of Kubrick's Full Metal Jacket meets Taps, this mischievous follow-up is arguably the weakest of the franchise, but it's a bearable, comical watch with an amusing haunted funhouse finale. The third installment enlists in the 4K Ultra HD military academy with an attractive and satisfying Dolby Vision HDR presentation, delivering a notable step-up from the previous Blu-ray box set. Scream Factory also culls together an awesomely engaging Dolby Atmos soundtrack with a new set of bonus features. Overall, the two-disc UHD collector's edition is a recommended addition to the 4K library.