Warner Bros. is on a roll with releasing Kubrick's catalog in 4K. First, it was 2001: A Space Odyssey, then The Shining, and now Full Metal Jacket, which just looks outstanding in its new 4K with HDR10 format. This new release also comes with a new DTS-HD 5.1 audio mix along with its original mono mix as an option. The same bonus features have been imported over here too as it all discusses the story of marines going through recruit training and being thrown into the Vietnam war. This is still a remarkable movie some 30 years later and worth the upgrade. Highly Recommended. 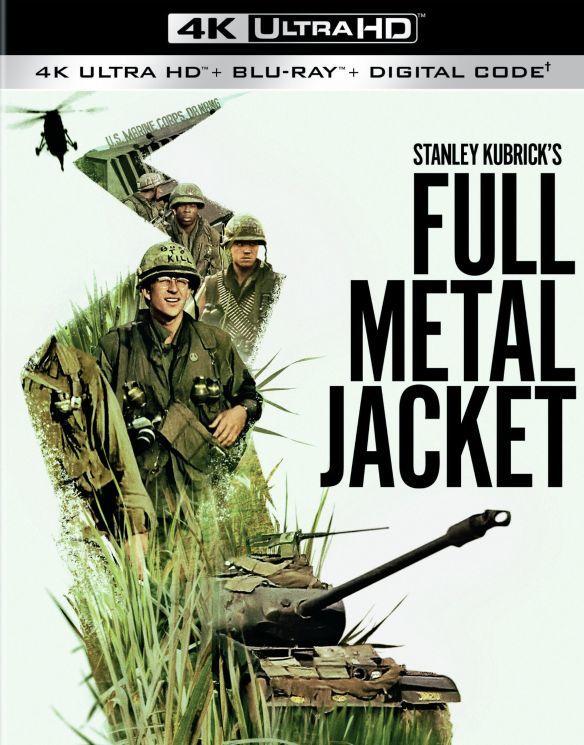 After five years spent making 'The Shining, Stanley Kubrick decided to venture once again into the war genre. This time, the focus is on the Vietnam war in 1967, centering on a group of marines going through intense boot camp and traveling overseas to fight. Adapted from Gustav Harsford's book The Short-Timers, Kubrick has concocted a masterpiece of war with deep themes of humanity and the struggles to be good and evil. The film itself plays out like a two-act play with half of the film taking place inside the first day of boot camp, going through graduation. The latter half is war itself as the narrative follows one particular marine with the handle of 'Joker' (Matthew Modine).

Set to the excellent music of the 60s, the film gives an in-depth glimpse of America's youths getting every strand of hair on their head cut off. Kubrick wanted to show how humanity is basically stripped and taken away as these young men enter the military so they can be reborn and trained again as a vicious killer in order to keep the peace. It's quite ironic, as Joker states in the middle of the film when he is questioned on why he has a peace symbol on his marine helmet. He answers with, "It's supposed to suggest the duality of man."

And Kubrick wanted to show Joker's journey as he sees both the good and bad in humanity. A lot of people say that the first half of the film that takes place at boot camp is the better part of the film if not the only part of the movie that is watchable. And while it is quite fun to watch Gunnery Sgt. Hartman (R. Lee Ermey) yell at everyone for the better part of an hour, the actual war shows just how some marines take to the atrocities of war and might be even better than the first half as time goes on. Some are sadistic, some are funny, and some are cautious.

But when faced with the most extreme circumstances, the basic human instincts are usually the same. It's what keeps humans moving forward as Kubrick shows in the final moments of this brilliant war film. And Kubrick's inclusion of all the Mickey Mouse songs and props were genius throughout the story. It was a subtle way to show that in fact, the marines thought this war and evil was indeed crap, hence the term Mickey Mouse was used as slang to describe something as amateur, which is why all the marching and singing of the Mickey Mouse song is heard, as it stood as a symbol for America. Kubrick was on to something here, showcasing the visuals of a destroyed city, burning in flames as the song is heard being sung by the troops.

It's truly a remarkable film with some superb performances by Modine and Ermey, but a little known actor at the time by the name of Vincent D'Onofrio delivers one of the best performances of that year and is still most recognized for this movie today (other than playing Thor in Adventures in Babysitting). But his character Pvt. Pyle goes through such an intense time, that D'Onofrio transforms into something unrecognizable from when his character is first introduced with a smile that he can't seem to remove. Full Metal Jacket is an intense yet darkly funny war film that continues to force the question of the duality of man as Joker so delicately put it and still carries on that message today in modern political climates.

Full Metal Jacket moves in with a new 4K + HDR10 transfer in 2160p from Warner Bros. There's also a Blu-ray copy of the film and Digital code. The discs are housed inside a hard, black eco-friendly plastic case with a cardboard slipcover featuring new artwork for the film. 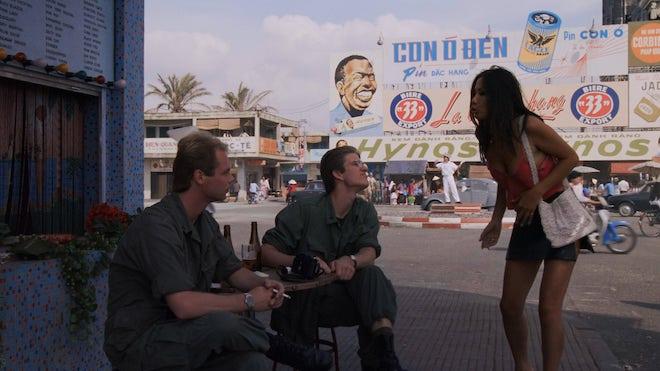 Full Metal Jacket ambushes to 4K with a brand new 2160p UHD transfer with HDR10 that was supervised by Kubrick's personal assistant Leon Vitali. This film was theatrically released in 1.85:1 as Kubrick disliked the black bars on the screen, however here, Full Metal Jacket has a 1.78:1 aspect ratio, which Kubrick would have been fond of, given present-day television standards. The image displayed here is the best it's ever looked.

Warner Bros. has already done an outstanding job, releasing the 4K versions of 2001: A Space Odyssey and The Shining, so it's no exception that Full Metal Jacket receives the same treatment. First off, Full Metal Jacket isn't exactly a visually colorful film, filled with bright shining primary colors that looks like a pop music video. It's quite the opposite in fact, as Kubrick showcased the mundane and dull colors of military life in the first half of the film at the Marine recruit training facility. That being said, each image looks exquisite and brings out those dull green uniforms that contrast nicely with the orange-brown floor and beige walls that surround the bunk beds. The fluorescent lighting in the barracks heightens these unexciting colors. Once the marines are outside, a mix of blue and gray skies look wonderful meshed with the patchy green grass and grey sweatshirts and pants. Nighttime sequences in the barracks and in the 2nd half of the film have a cold, steely blue palette that looks like hell has frozen over into a bland, icy landscape. Black levels here are incredibly deep and inky with no evidence of crush or murkiness.

The latter half of the film heats up as the marine soldiers head into battle into fiery war-torn landscapes with crumbling buildings set on fire that brings out the red, yellow, and orange colors to the forefront. Perhaps the most colorful scene is the first sequence after the recruit training, where Joker is enjoying some off-time in the city. Colorful vehicles, trees, and storefronts look phenomenal, utilizing the full-color spectrum, giving everyone a glimpse at a colorful life outside the army. The HDR10 kicks into high gear in each scene, but especially during these nighttime sequences and in exterior locations that amp up the bigger primary colors, all of which look excellent.

The detail is also upgraded in every lighting condition as well with wonderful closeups that reveal even more facial stubble and pores, the textures in the uniforms, and the pristine detail of the barrack's clean floor and bathroom tile. Exterior shots reveal the necessary war-torn elements of destruction, fire, and smoke plumes. There is a good layer of grain here as well, keeping its filmic image stable, resulting in a natural and organic look of the film. Lastly, there are no video problems such as aliasing, banding, or excessive video noise. 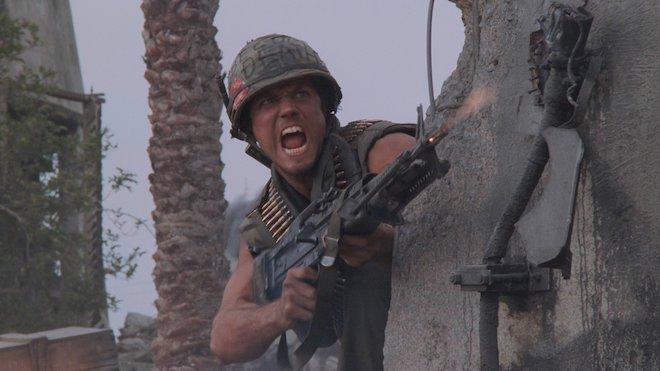 This 4K comes with a new lossless DTS-HD MA 5.1 audio mix along with the film's original mono track, which is super rare for a release with Warner Bros. Usually an original mono track is seen on a Criterion release. The new DTS-HD track has a tiny bit more weight to it than previous releases but is still front heavy for a good portion of the film. Sound effects of gunfire, explosions, debris falling, and distant shouting all sound wonderful in the surround speakers with great directionality and balance.

The scene in the helicopter with the machine gunner sounds full and robust while the sniper allows for the bullets to smoothly transition across speakers. Inside the barracks, a full sense of space is utilized as the Sgt. yells insults and commands where the recruits reply in unison that fills up the soundscape. The bass kicks in with some natural rumble with explosions, gun-fire, and the rock n roll soundtrack. Dialogue is clean and easy to follow, and free of any audio issues. 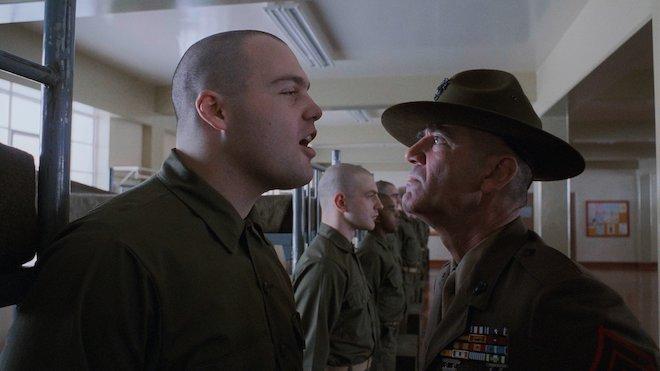 This new 4K release of Full Metal Jacket doesn't offer up any fresh bonus features but instead comes with the same extras on the previous release, which is only located on the Blu-ray version. 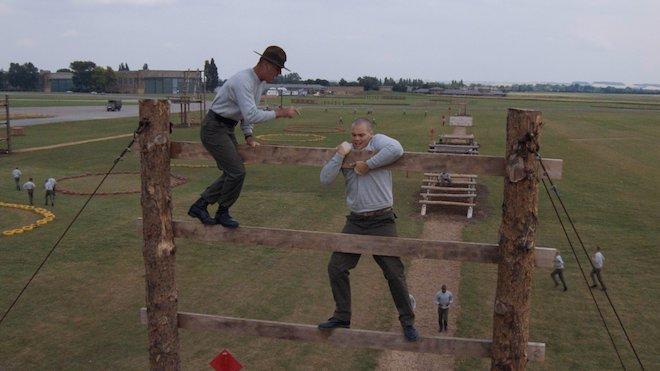 Full Metal Jacket still stands the test of time of being one of the greatest war films ever made with outstanding performances, top-notch photography and direction, along with some incredible metaphors on life, death, and what it means to be human. Warner Bros. knocked it out of the park with this new 4K transfer and new audio tracks. Despite no new extras, this 4K release is definitely worth the upgrade. Highly Recommended!