Although the first movie in the franchise is the furthest from a cinematic masterpiece and it didn't make a huge initial impact on the genre, it's sad nonetheless to see the direct follow-up Child's Play 2 make a mess of the storyline and take it into a weirdly cartoonish direction. While I wouldn't necessarily expect a repeat of part one, which frankly would have been worse, it would have been nice for the filmmakers to maintain the same creepy thriller atmosphere. Instead, the sequel turns the concept of a doll possessed by a psychotic serial killer — an incredibly silly premise already on its own — into a more straightforward "slasher" flick mixed with a good amount of wacky goofiness. A viewer's mileage will largely depend on their tolerance for a blend of darkly offbeat absurdity and standard genre tropes.

Interestingly, Chucky creator and writer of every entry in the series Don Mancini returns as the genius behind this unconventional sequel. Right from the start, it's apparent he embraces the mindless, goofier aspects of his creation, reviving a literally burnt-to-a-crisp doll in a Frankenstein-like opener that's roll-your-eyes cockamamie and somewhat funny all at once. Reassembled from new body parts and jolted back to life by a freak electrical accident, an energized Chucky is more determined than ever to transfer his soul into the body of little Andy (Alex Vincent). After the events of the first movie, mom has been institutionalized while he lives in a foster home that includes a generously caring Jenny Agutter, a sympathetic big sister in Christine Elise, and a cold, stony-hearted Gerrit Graham.

Director John Lafia also embraces this drastic change in tone while at the same time designing some eccentrically spooky moments that at times border on a kind of cartoonish nightmare. Chucky's attack on the school teacher (the wonderful Beth Grant) with a ruler is both dementedly creepy and over-the-top funny. The movie's highlight is undoubtedly at the Good Guys assembly line factory as the screen fills with an array of bright, bold colors while all sorts of gruesomely twisted mayhem ensues. Brad Dourif also returns as the voice of the maniacal doll, and honestly, he is the primary reason for watching any of the Chucky movies, including this somewhat disappointing but still watchable and twisted follow-up.

Vital Disc Stats: The Ultra HD Blu-ray
Scream Factory brings Child's Play 2 to 4K Ultra HD as a two-disc Collector's Edition combo pack. The Region Free, UHD66 disc sits comfortably opposite a Region A locked, BD50 disc on the opposing panel, and both discs are housed inside the standard black keepcase with a cardboard slipcover. At startup, the disc goes straight to a static screen with the usual selection along the left side of the screen and music playing in the background. 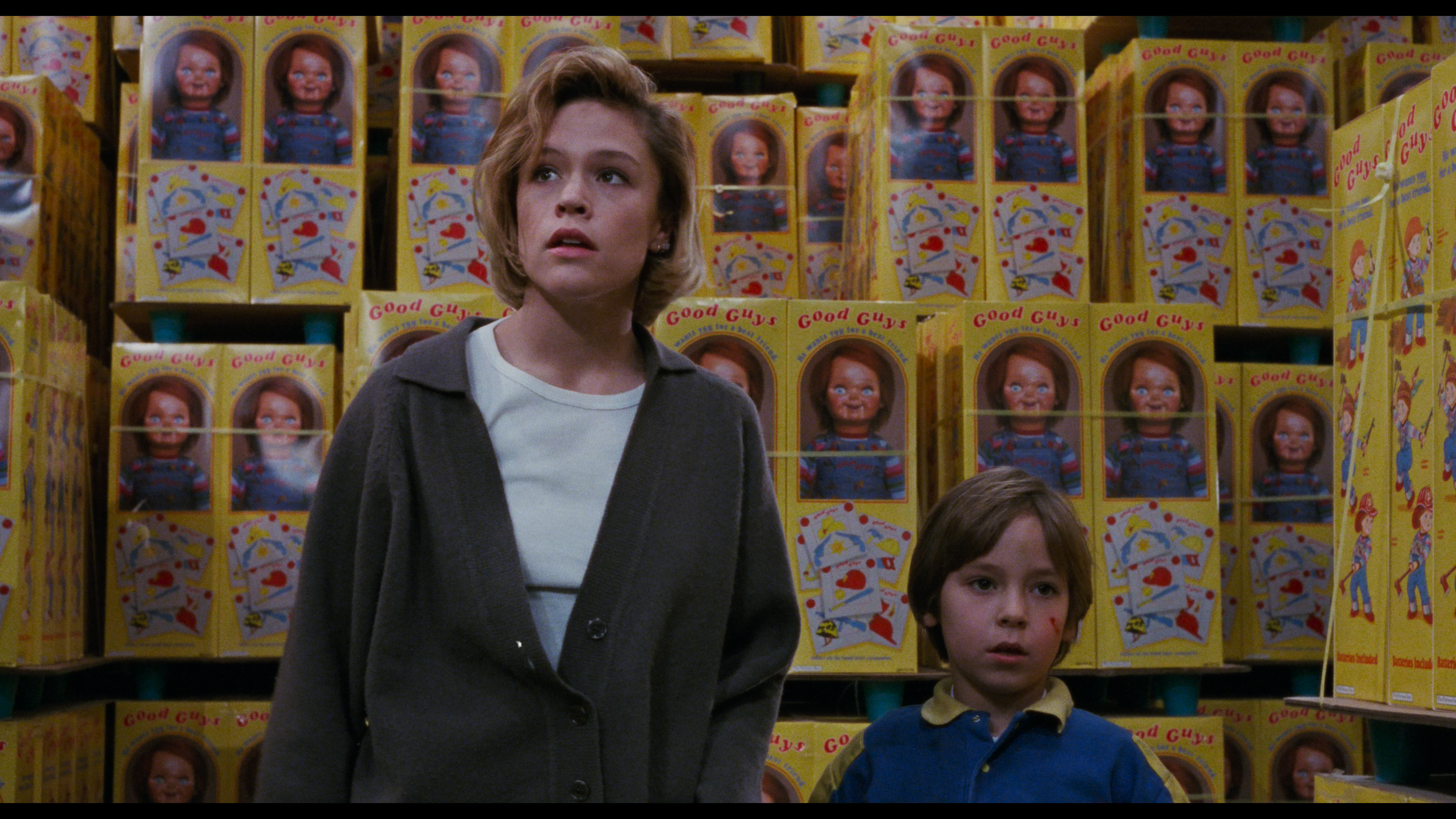 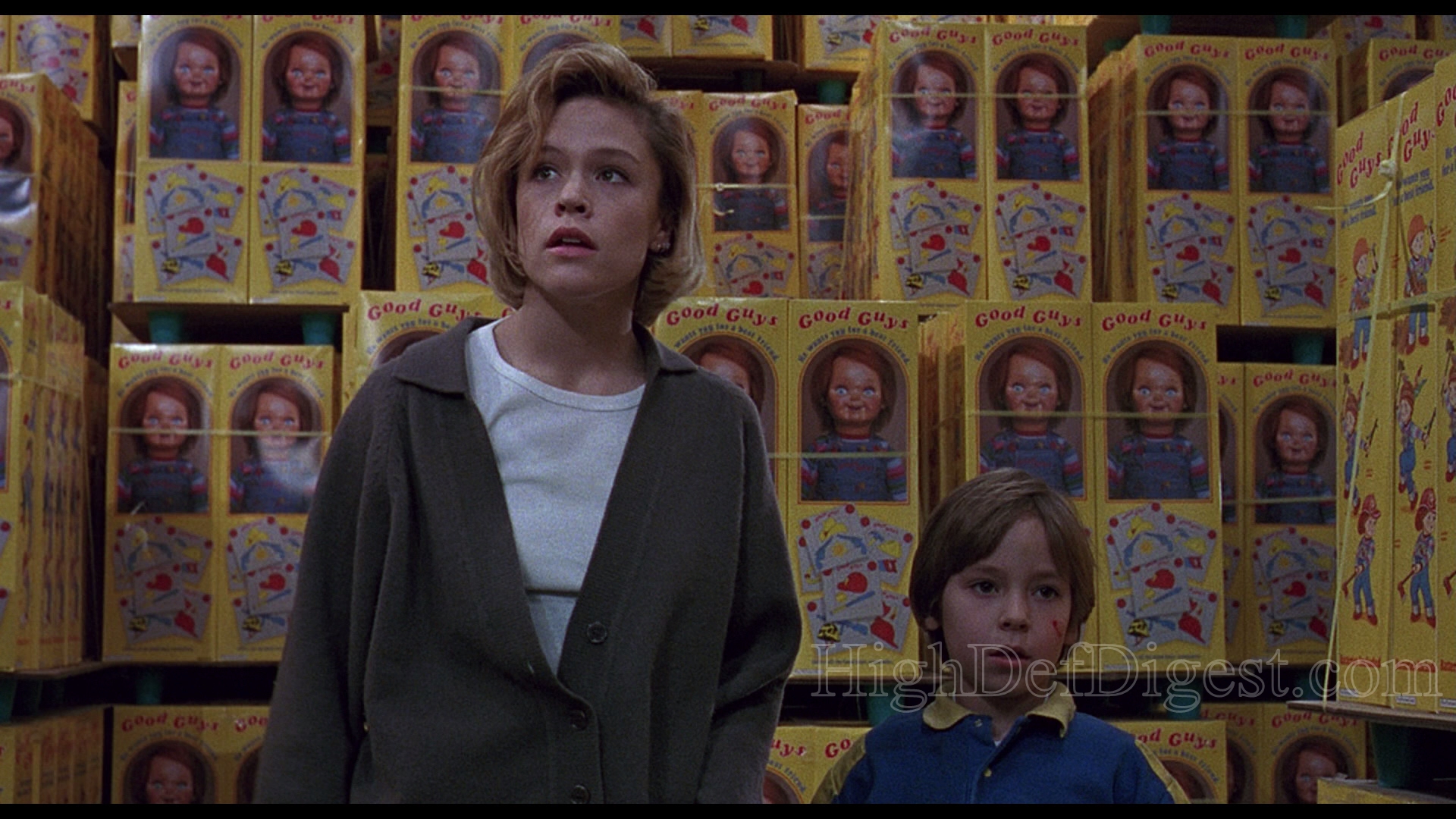 The sequel falls off the 4K Ultra HD assembly line with a killer HEVC H.265 encode that makes the previous Blu-rays look like outdated models. Struck from a brand-new remaster of the original 35mm camera negatives, the native 4K transfer comes with the occasional soft moments, which are to be expected, but for a majority of the runtime, the video flaunts about with better, more defined lines of various buildings and inside the Good Guys assembly line. We can make out more of the finer details and unique features of the woodwork inside the foster home and plainly see the small objects decorating the background. Cose-ups are highly revealing, and the costumes display great textural clarity. Brightness levels offer another notable step-up, delivering fuller, inkier blacks throughout and making the nighttime sequences that little bit creepier while the darkest, bleakest shadows maintain excellent visibility.

The Dolby Vision HDR presentation also comes home with improved contrast balance and noticeably cleaner, crisper whites. The specular highlights are all the more noteworthy, furnishing a tighter, narrower glow with better clarity in the hottest spots, like the light fixtures, sunlight beaming through the windows and the light glistening off various objects. Better yet, the palette is significantly bolder and more animated than its HD SDR counterpart, boasting very flamboyant primaries, like the intense energetic blues and richer, more dramatic reds in Chucky's outfit. More impressive still are the more dynamic and spirited secondary hues, like the comical pastel colors of the Simpson house. Facial complexions appear more natural with lifelike textures and tones in the entire cast. Awash in a more refined layer of grain from start to finish, the 1.85:1 image comes with an attractive film-like quality and is the best the movie has ever looked. (Dolby Vision HDR Video Rating: 90/100) 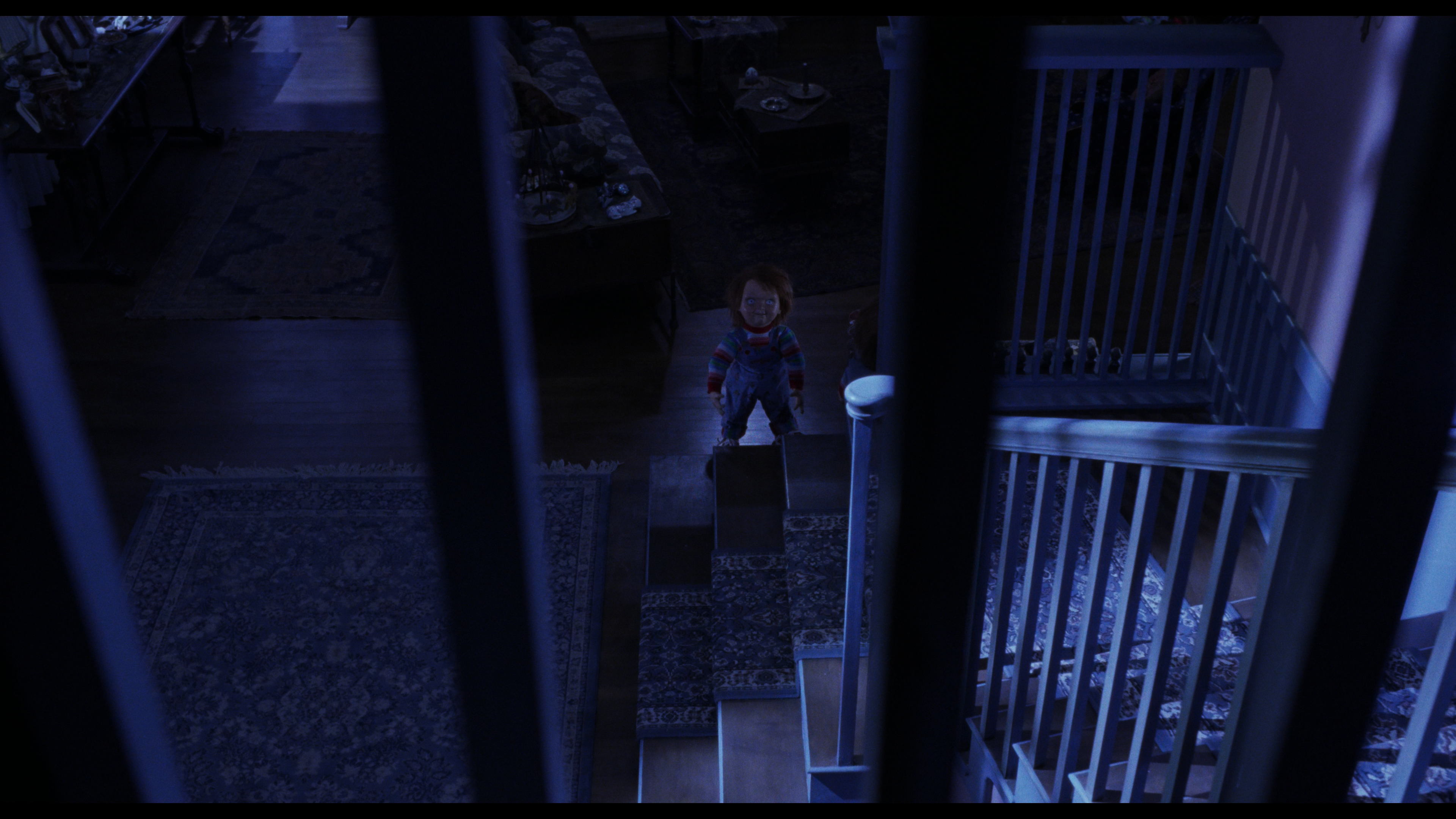 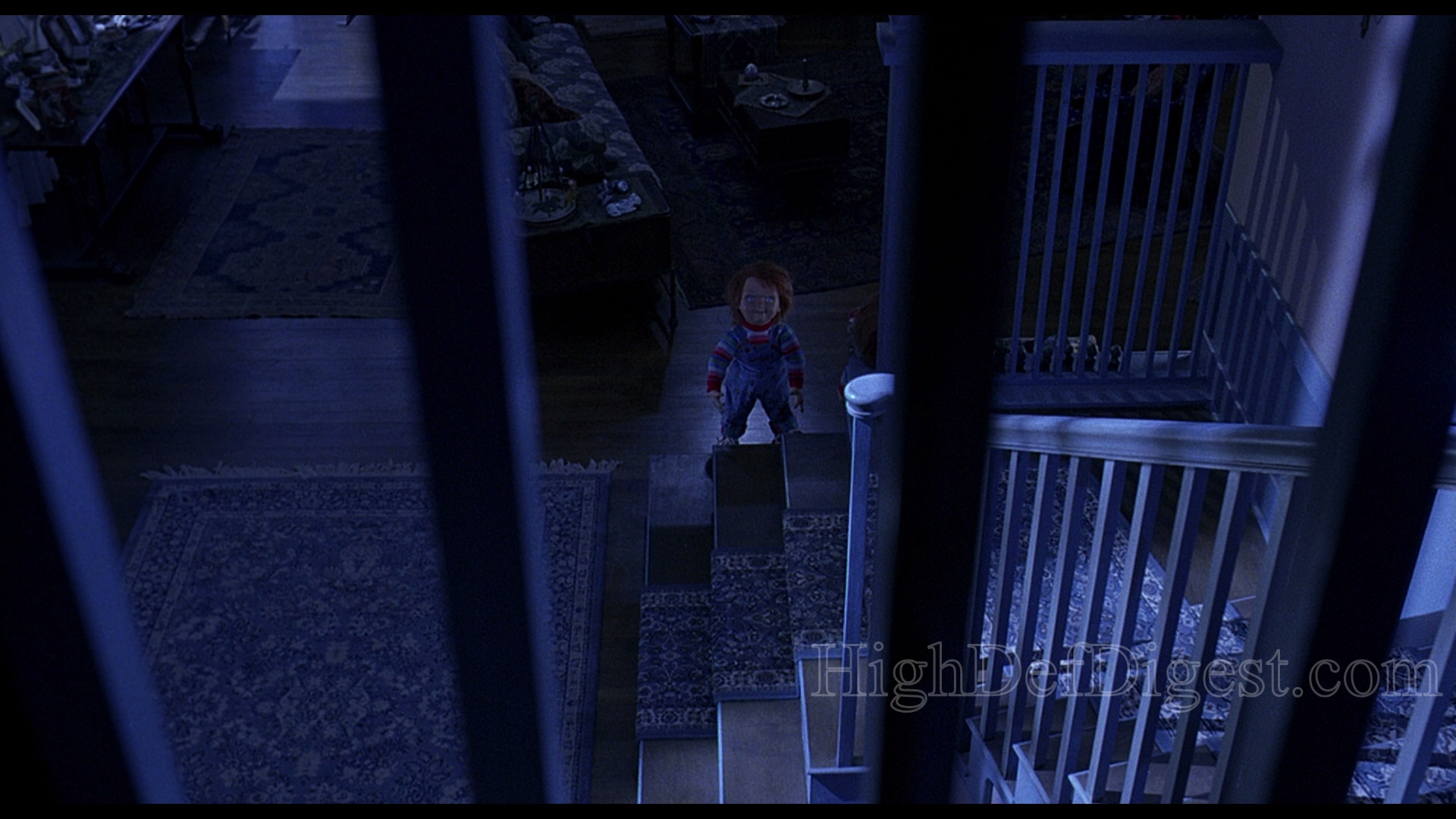 Chucky returns home with another awesome Dolby Atmos soundtrack that largely remains true to the original design while throwing in a couple of welcomed surprises. And like the first movie, this is a front-heavy presentation, as it should be, keeping the focus on the dialogue and character interactions.

With a few ambient effects subtly bleeding into the top heights, imaging feels broader and more expansive that its DTS-HD predecessor, displaying outstanding separation and balance with excellent clarity of the background activity moving into the off-screen space and lightly above the screen. An impressive mid-range maintains superb distinction during the loudest segments while Graeme Revell's score enjoys exceptional acoustical detailing and fidelity. The surrounds and heights are selectively employed for specific action pieces, and they are quite effective at expanding and widening the soundfield with a few atmospherics understatedly moving overhead. The most memorable moments are during the rainstorm at the beginning with Greg Germann as water pours down from above and the climactic showdown at the assembly line when juicy chunks of Chucky fly overhead and land all around the listening area. The low-end is also a bit more robust and appreciable, providing some weight and presence to the music and action, especially in those final moments inside the Good Guys factory, making this an awesome object-based mix for a cheesy follow-up. (Dolby Atmos Audio Rating: 82/100) 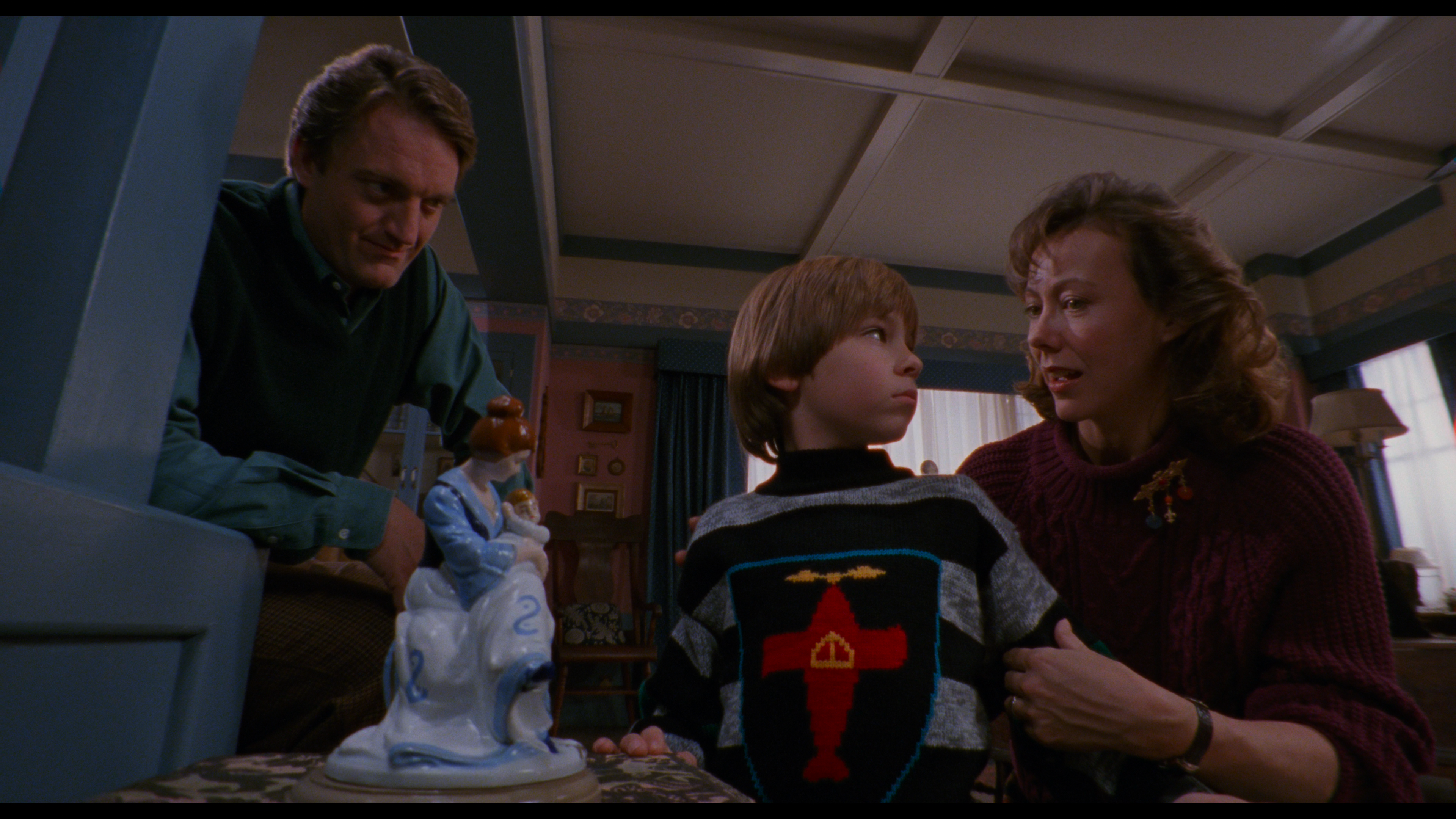 For this UHD edition, Scream Factory loads the accompanying Blu-ray disc with some familiar supplements along with six more new exclusives. 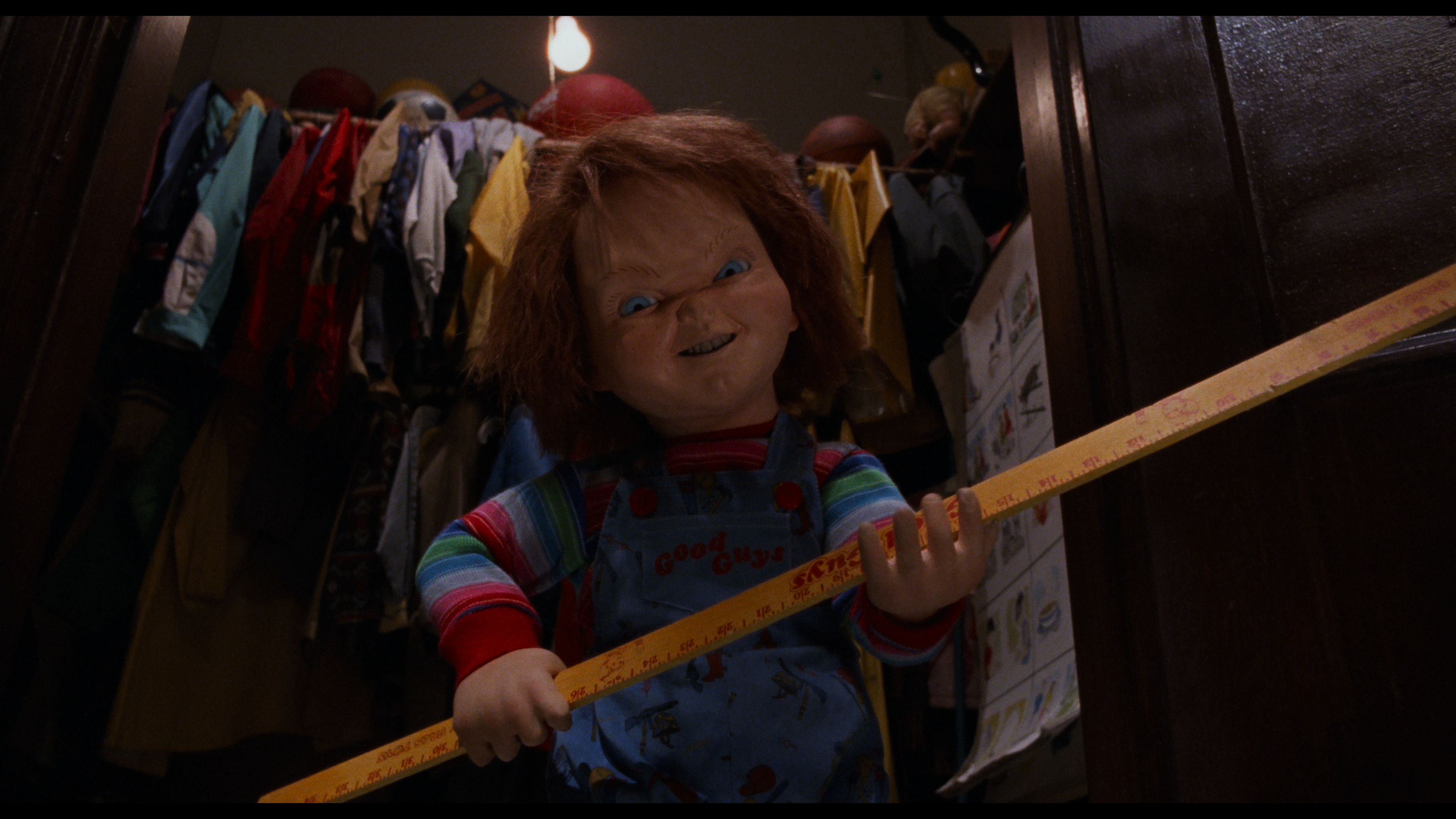 Over three decades later, Child's Play 2 remains a fun direct follow-up that sees a traumatized Andy once again fighting to keep his soul and body intact against a Good Guys doll possessed by the psychotic serial killer Chucky. Although it arguably makes a mess of the original storyline, moving away from the creepy thriller atmosphere of its predecessor to a more straightforward "slasher" flick, the weirdly cartoonish sequel is nonetheless a delightfully twisted mix of wacky goofiness and darkly offbeat absurdity. The movie falls off the 4K Ultra HD assembly line with a killer, impressive Dolby Vision HDR presentation, delivering an excellent upgrade from the previous Blu-ray box set. Scream Factory also culls together an awesome and satisfying Dolby Atmos soundtrack with a new set of bonus features. Overall, the two-disc UHD collector's edition is a recommended addition to the 4K library.